I had a bunch of other things to write about today, but I’ve shoved it all aside because my PC just reinvented the concept of fish, and you need to know about it.

This isn’t just an “ooh, this looks interesting” post; I’ve got proper weird street evangelist excitement about what I’ve just been playing, and I simply have to share it. It’s not a candidate for game of the year, because it’s barely a game, but if you’re remotely interested in evolutionary science, ecology or just sea stuff in general, you’re going to want to play some Ecosystem.

Back in April, I attended EGX Rezzed with a single goal in mind: to see how many games I could find with eels in them. About eight seconds after declaring my intentions to colleagues, I stopped dead in my tracks, confronted by an early tech demo for Ecosystem, and its banner, which had a massive picture of what was basically an eel on it.

At the time, there wasn’t much to show, but I was intrigued. After plenty of near-hits and plenty of misses, it seemed Ecosystem had the potential to be the evolution simulator I’d dreamed of since I was a kid. But potential was all it was. Although I corresponded with Tom Johnson, the game’s designer, for some time after the show, I was prepared for the fact it would be a long time before I had any idea whether Ecosystem could deliver the goods or not. 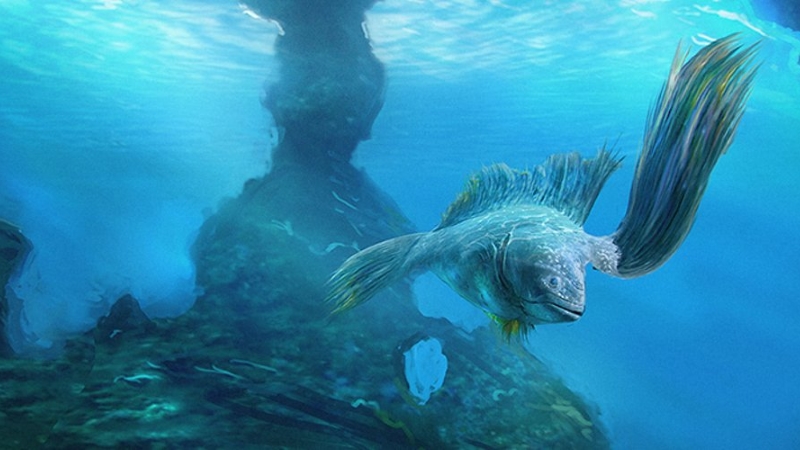 The concept art that pulled me in. Look at this magnificent bastard.

Last week, Tom emailed me to let me know a full demo was available, and last night, I fired it up. You can do so too: it’s available for free on the game’s website or on Steam, and I suggest you get it now so you can jump in as soon as you’ve finished reading. While being fundamentally stable, the demo is buggy as hell, and is drastically distant from being anything like feature-complete. But honestly — and I say this as a lifelong fan of god games — this is the first game that has ever made me feel like an actual god.

Once upon a time, I suppose this would have been called a “software toy”. You paint rock and mud and weeds onto an expanse of sandy sea floor, and then you seed randomly generated organisms into the middle of it.

The creatures are absolute shite at first: just twisty, lumpy blobs that twitch and spasm completely at random. Most, if not all, will die before they can manage anything in life. But some, through a fluke of their flailing appendages working against the simulated fluid of the ocean, will manage to move, with agonising slowness, across the seabed. Most of those will die too. But some, through luck or skill, might reach food, and manage to postpone death long enough to reproduce. 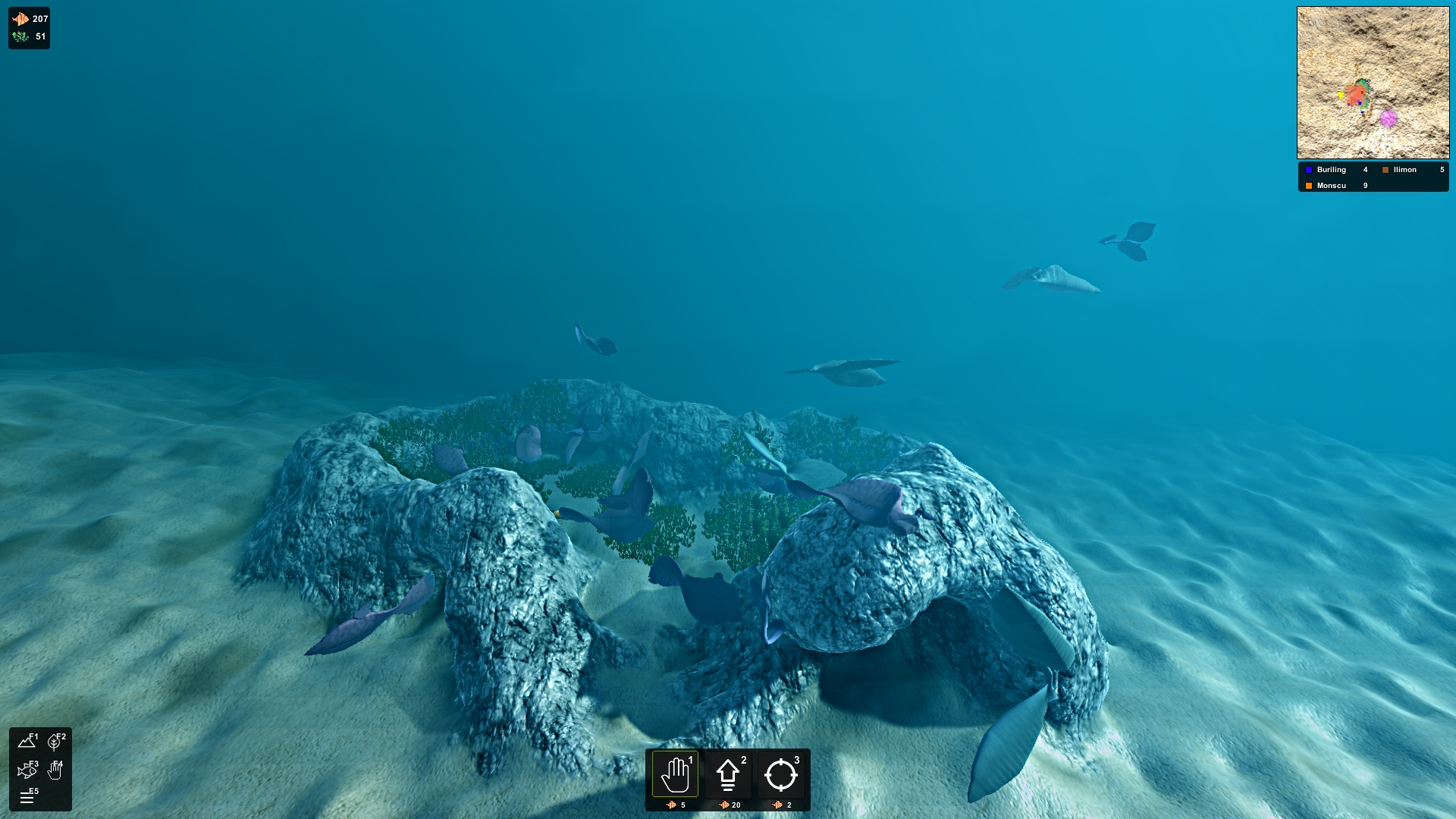 Here they are: my first batch of appalling flappy babies.

That’s when things get really interesting. Because each of the successful organism’s young have a chance to bear a slight mutation to their parent’s bodyplan. Maybe one has a slightly flatter protruberance sticking out of it, that generates more resistance when it twitches against the water, moving it faster (it’s invented a fin!). Maybe one has glitched DNA that has bifurcated the same appendage (two fins!), while another has a change to its neural architecture that means two parts of it are twitching in slightly greater synchronicity (wriggly boy!).

Some of these offspring will reach food faster because of their particular mutations, and will thus survive longer and breed more. The proportion of the next generation based on their bodyplan will be greater, while the proportion based on the original design, or ropier iterations of it, will shrink and maybe disappear entirely. And that’s natural selection, baby! As the generations progress, the descendants of each haphazard blob that managed to survive initially will gradually self-optimise, until they have brains and bodies that work genuinely well for seeking out food.

After a while, they genuinely start to look like fish. Or at least fish as described to a sketch artist who has never seen one, by a man coming up on a soldier dose of MDMA during an out of control house party. 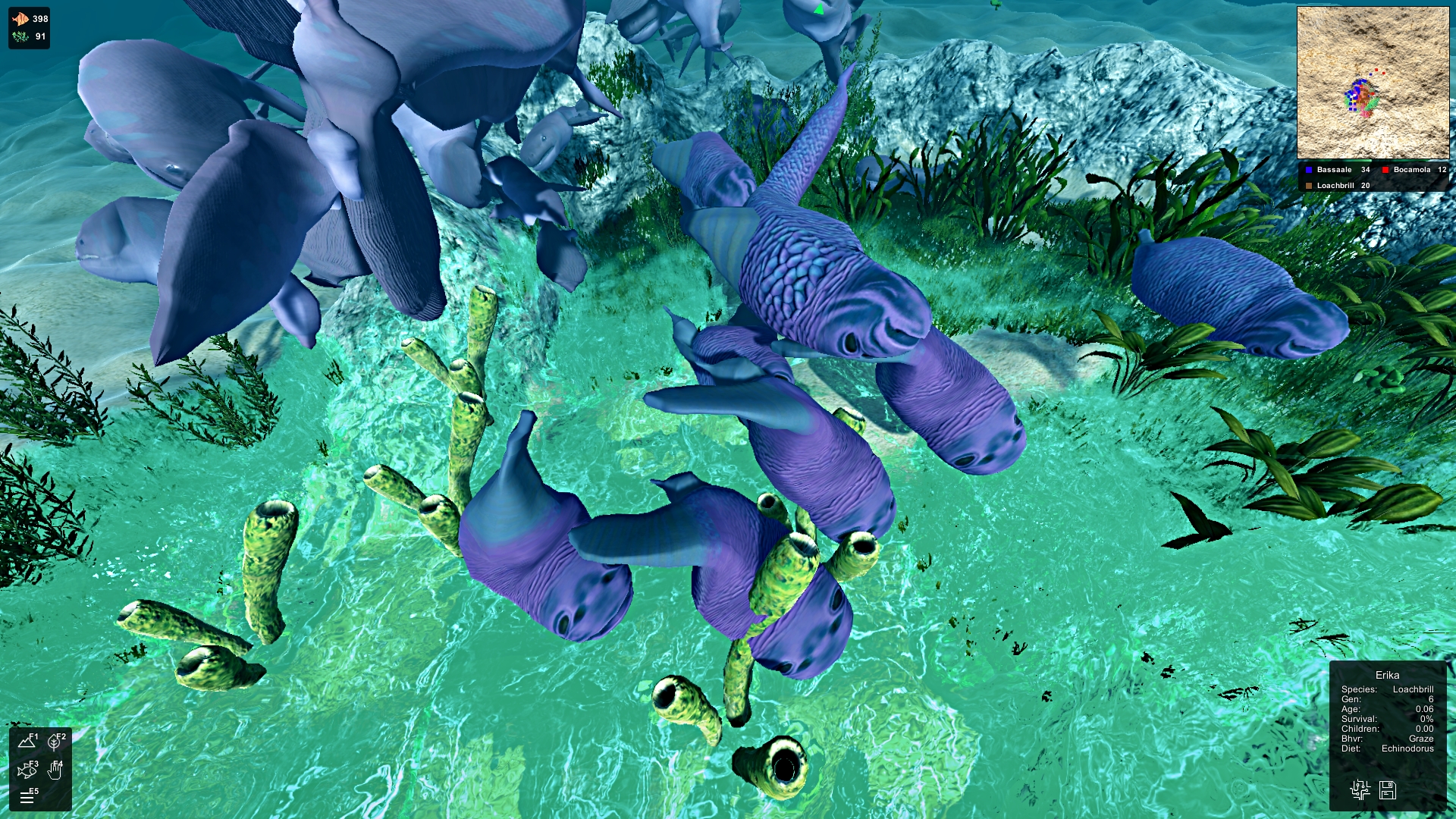 These dead-eyed gits were called the Bocamola, and they were drastically successful thanks to the fact their back ends waggled from side to side, like outboard motors made from cornershop ham. It was almost majestic seeing them putter along in giant, sideways swimming shoals. Although admittedly, this was majestic by the standards of a world where Blue Planet would have an all-tuba soundtrack.

But it gets more interesting than that. Because the chances are, more than one type of blob will survive the initial shitshow, giving rise to multiple distinct lineages. And if more than one of those lineages likes the same kind of food, they’ll compete for it. They don’t fight or anything, but the brutal mathematics of of the sea will do for the least proficient wigglers.

My practice ocean had a dominant species called the Baasaale (names are randomly generated), which looked a bit like someone had raised a coelacanth in a waffle iron and given it depression. These folks were just about managing to struggle miserably sideways to the seagrass beds and the breeding grounds before dying of exhaustion, and while you couldn’t say they were thriving, they were getting by. 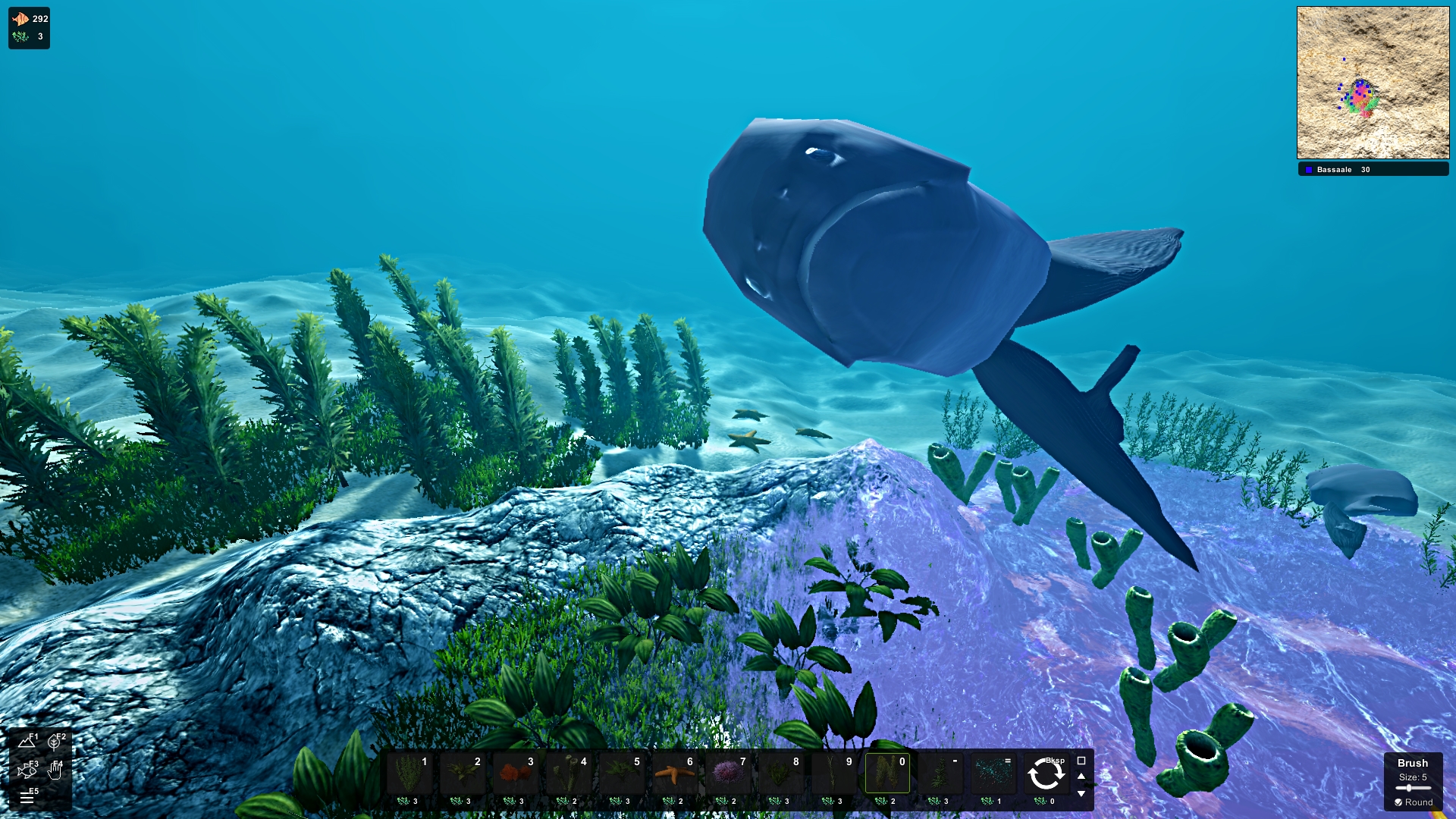 But then, an outlier species called the Loachbrill, which looked sort of like an obese snake with a bollock hanging off its chin, suddenly had a breakthrough. Until this moment, they had been even more rubbish than the Baasaale, and were barely clinging on to their place in the reef. But then, a young Loachbrill was born with a tendency for its body to jackknife violently, sending it through the water in wild, just-about-deliberate lurches.

Suddenly, the new-registration Loachbrills were all over the dinner, cleaning up entire beds of seagrass, and their population exploded. The poor Baasaale couldn’t even get within thirty feet of sustenance without a bollock-chinned serpent lummoxing in to guzzle it, and I almost felt sad to see the species’ last survivor die and float to the distant surface like an Ariel liquitab full of mauve piss. 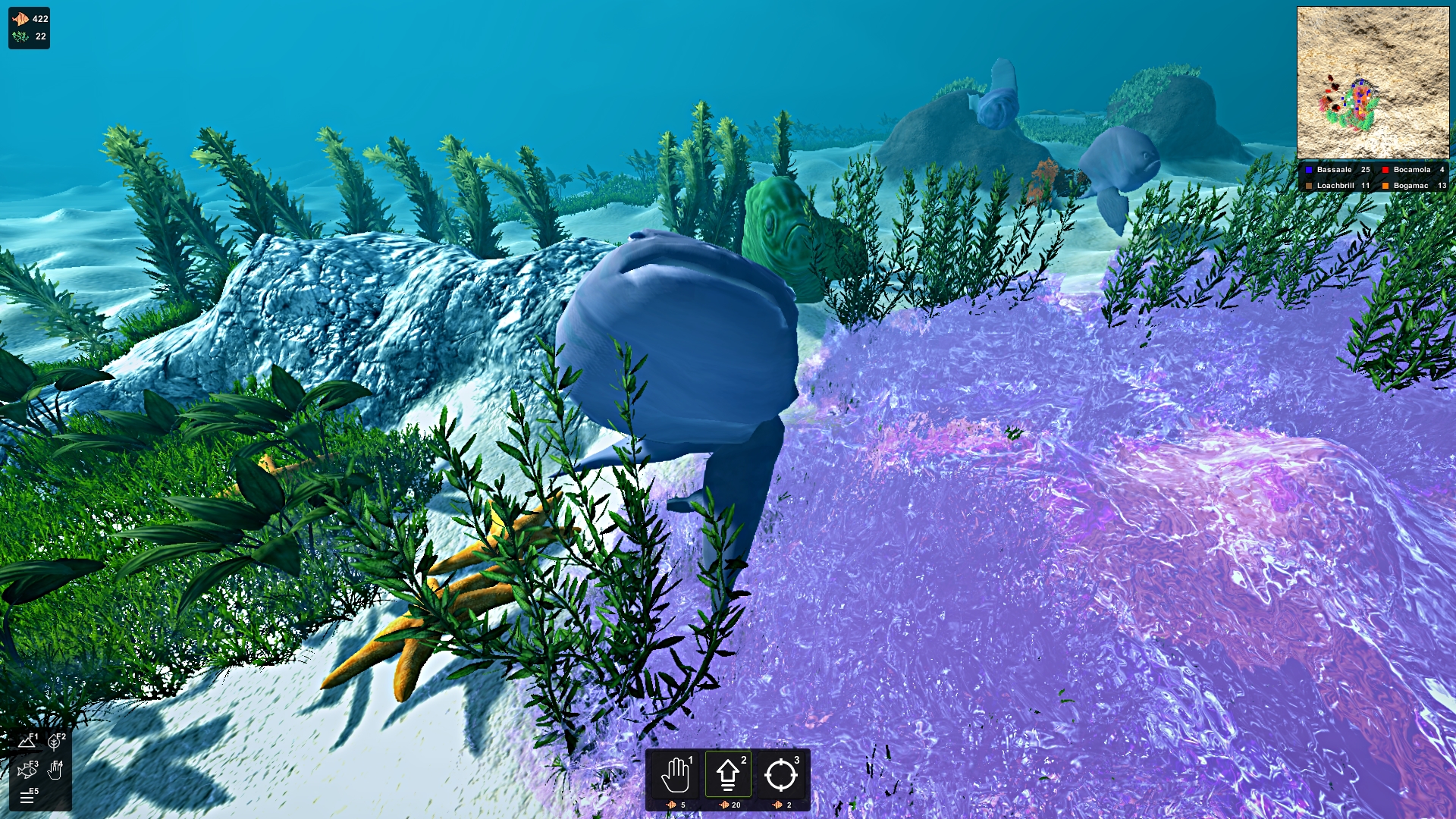 Remember me as I was, not as I am.

Later in my session, I witnessed the development of a distinct subspecies. I’d had a population of largely sessile filter feeders called Tilcores, who looked like merry indigo tadpoles with constantly waggling, handlike growths on the sides of their bodies. At one point, a green variant of the tilcore sprung up, and a few generations later, its hand-organ grew to wave about on the end of a long, grinch-like arm. These did about as well as the vanilla Tilcores, however, and the two subpopulations coexisted until they were all butchered by a weird predator that looked like a moray eel’s face sellotaped onto a white, limbless giraffe.

Despite me hyping it to the heavens, it’s worth pointing out once again that Ecosystem’s demo is pretty sparse. There’s a huge amount yet to be implemented featurewise, and there’s so little information available about what’s going on that it’s impossible to know fully what’s a massive bug, and what’s just evolution working as intended. You can watch maps of your creatures’ neurons fire in realtime, but there’s no way of working out what’s actually going on. 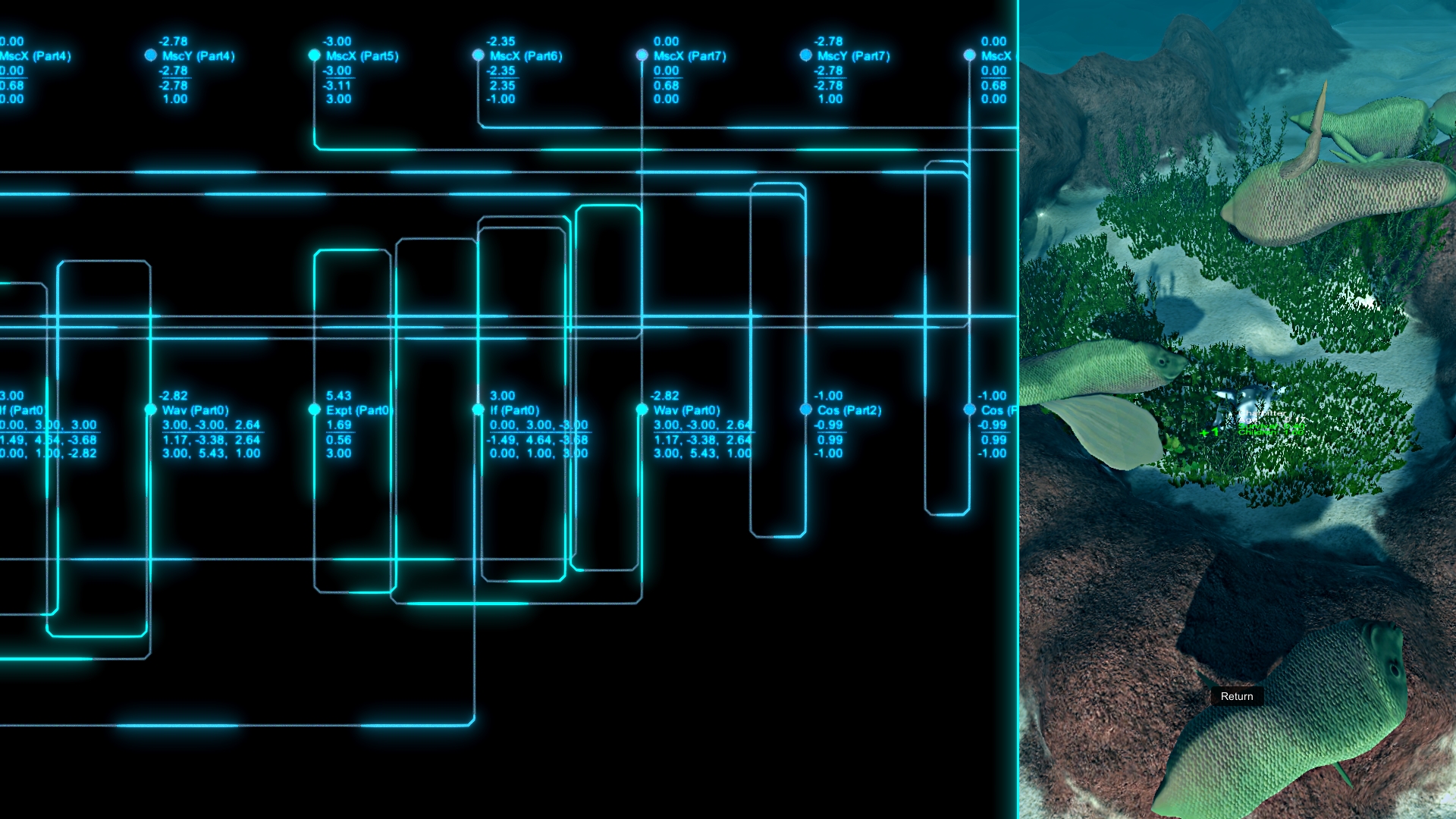 Inside the mind of a barely functional lungfish.

What’s more, it’s not massively interactive. There’s a crude resource system governing how many creatures and food sources you can spawn at any given point, and a boost function that allows you to give struggling but lovable beasts a chance to spawn even if they’ve failed at eating (who knows, perhaps one of their kids might finally nail swimming?). Similarly, there’s a cull button, for wiping out oversuccessful predators or particularly annoying Von Neumann blobs.

But beyond that, and the landscaping tools with which you build the substrate for it all to play out on, it’s a game for sitting back and watching. Still, when the core feature of the game is a faithful, if abstracted, simulation of natural selection, there’s a lot to sit back and watch. And hey, it’s free – which ain’t a bad price to pay for godhood.

Yes, a lot of my excitement for this game is still driven by what it has the potential to be, rather than what it is at the moment. But as far as I’m concerned, it’s already managed to achieve the dream that so many games have fallen short of, and that’s an impressive start. Like a weird flappy manta ray, straining to reach a clump of polyps by waving its lopsided single arsecheek around, the only way for Ecosystem is up. 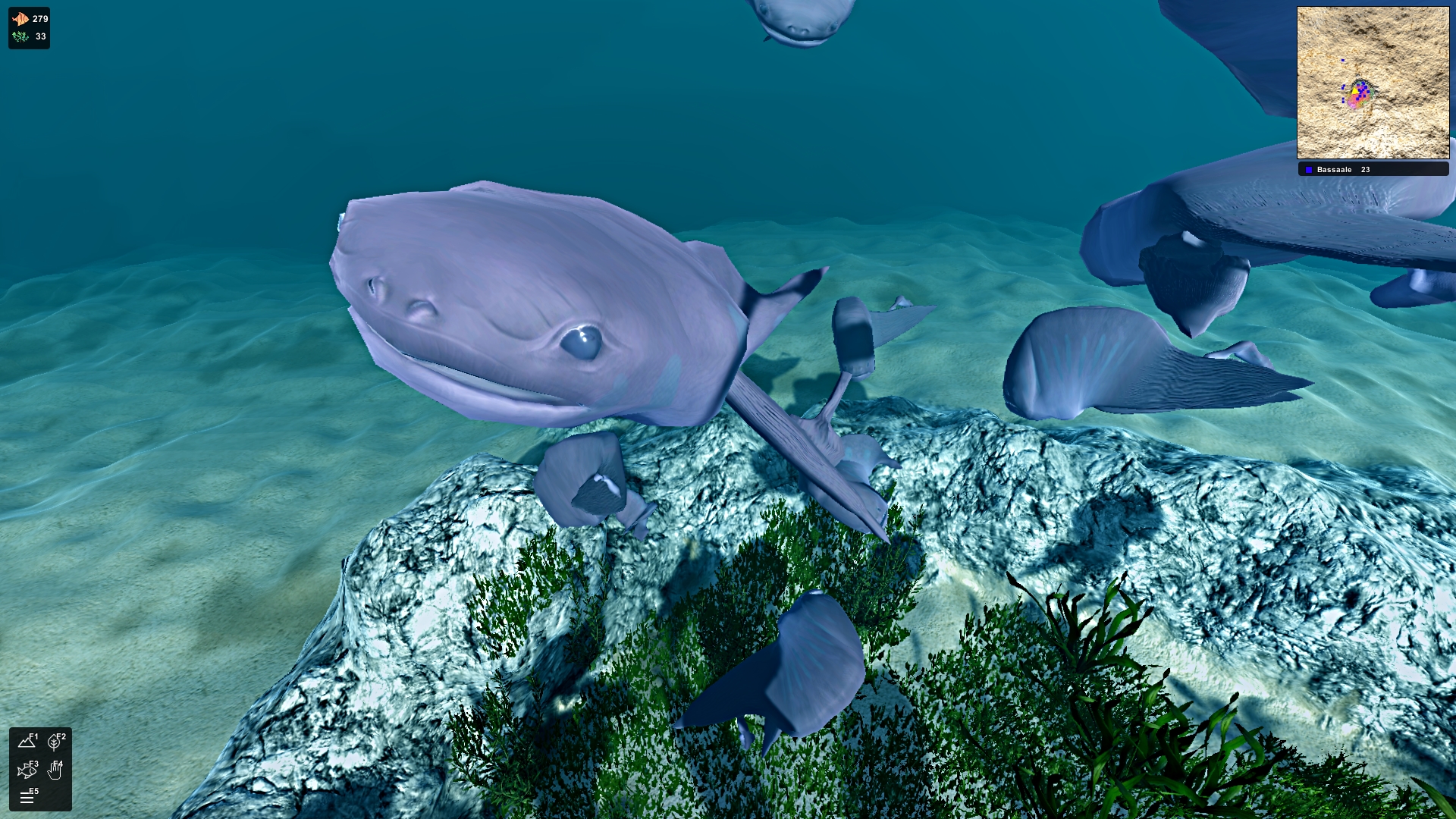 The Baasaale Empire shall rise from the ashes