For reasons, Space Engineers got its hooks into me last week. I had plans to fly around in space exploring, salvaging, and maybe pirating some rich jerks. But I started on a Mars-y orange planet (I am assured that Mars is not actually red, just its atmosphere), and had to get to space first. Well, first I had to figure out how the game worked, which was needlessly difficult, but whinge moan complain, that’s not what I’m here to talk about. I’m here to talk about what I built.

I have not built a star destroyer. I have not built a scale model of the Burj Khalifa. I have not built a functional robot city sustained by a perpetual motion generator. I have dug a haphazard mine shaft with a ladder all the way down to a vein of cobalt. I have built a long tube across all three axes that hoovers up iron ore as I drill it and sends it to my refinery. It’s so heavy that it caused the entire refinery to lift into the air at about 10 degrees. I do not care. All this was made possible by one thing: the buggy.

I have built a primitive moon buggy with a solar panel roof that would probably sear my flesh to the bone every time I took a left turn. When the storage box is full of ore the front of the buggy scrapes visibly on the ground. Three quarters of the prismatic armour I put on the front as its only decoration has disappeared, presumably through this friction. I installed a mod that adds a paint spraycan powered by gravel, and used that to spray it purple, for speed. 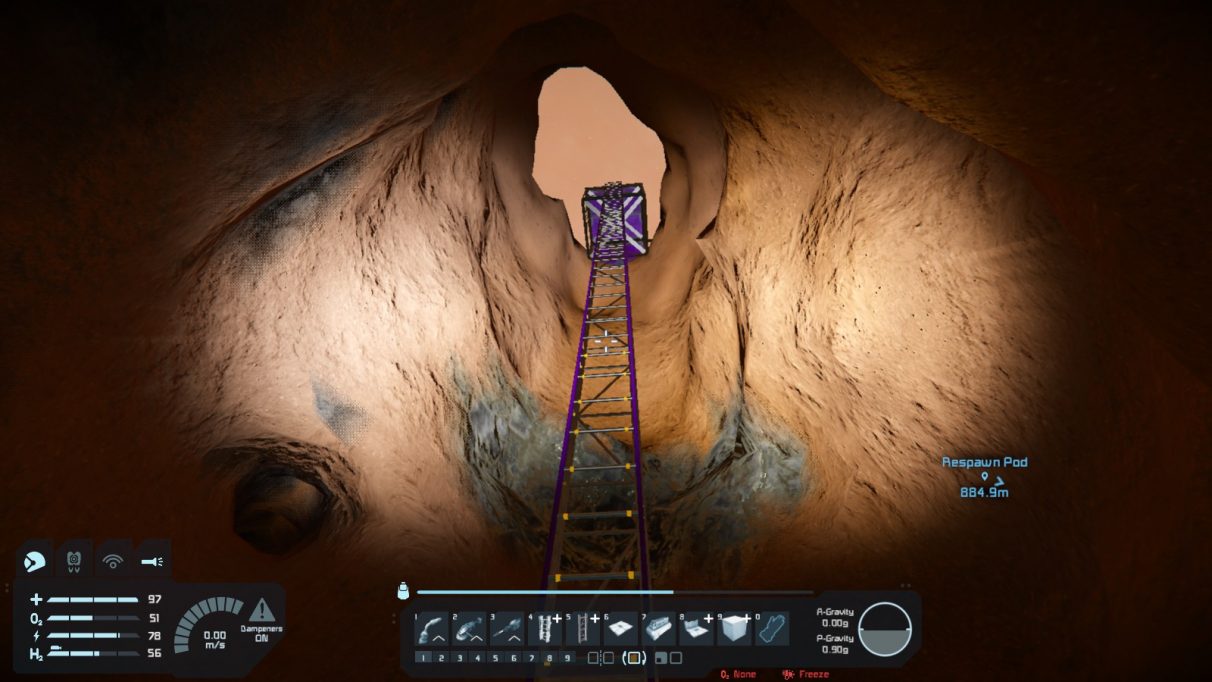 This is how I play building games. This is the right and moral way to be.

It took me two days to get it moving. The process of having the resources for it took longer. Figuring out all the steps in between was needlessly opaque and frustrating, with several false starts and red herrings (example: the smallest wheels, the normal wheel sized wheels than any normal human would likely start their first vehicle with, are so small that they cannot affix to a vehicle and touch the ground. They are useless). Figuring out that it didn’t actually need an engine helped. 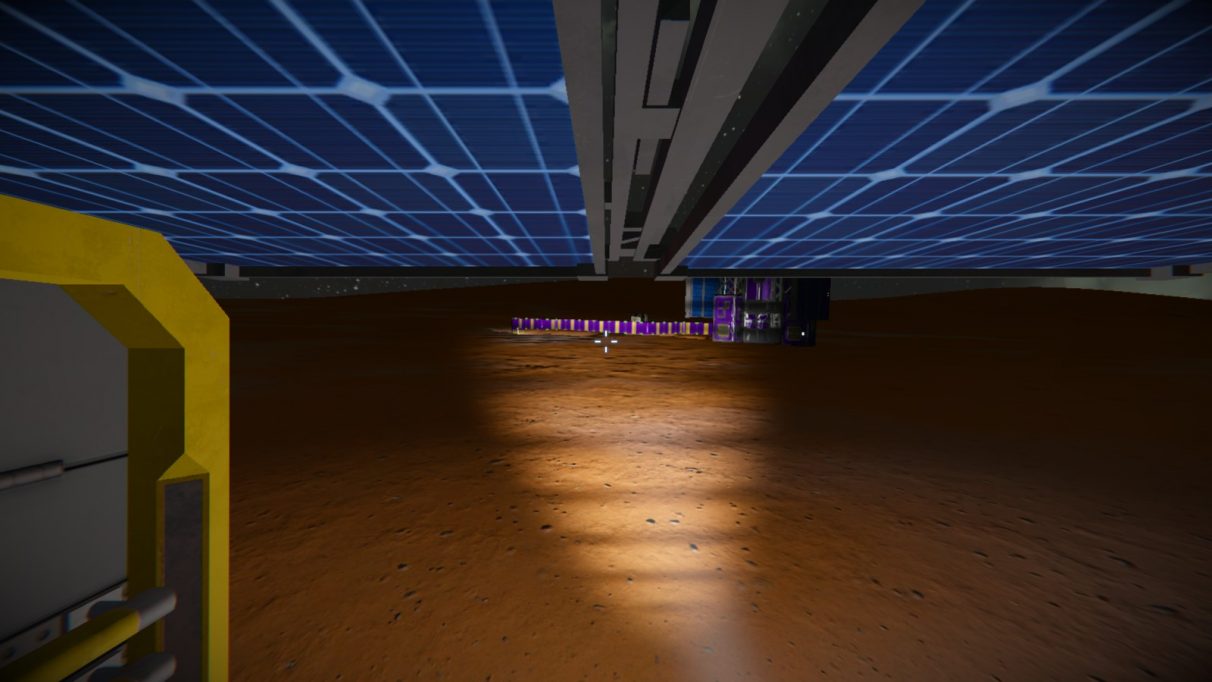 Being able to see things is for nerds

Negotiating the process of setting it right when I realised I’d put one of the suspensions on in the wrong orientation (THERE IS NO WAY TO TELL WHICH WAY IS WHICH PUT AN ARROW ON IT FOR THE LOVE OF) was the opposite of zen. I had to tunnel under it to fix it, which caused the whole thing to tilt and stop moving. When I eventually got it out, and charged its battery, I took it for a reckless test drive and discovered that accelerating causes it to rear up in a massive, brilliant wheelie for a second before gently falling back down and moving forward. It hit a bump and flipped over, I think, three times before landing upright and continuing, unconcerned. This has taken me two weeks. 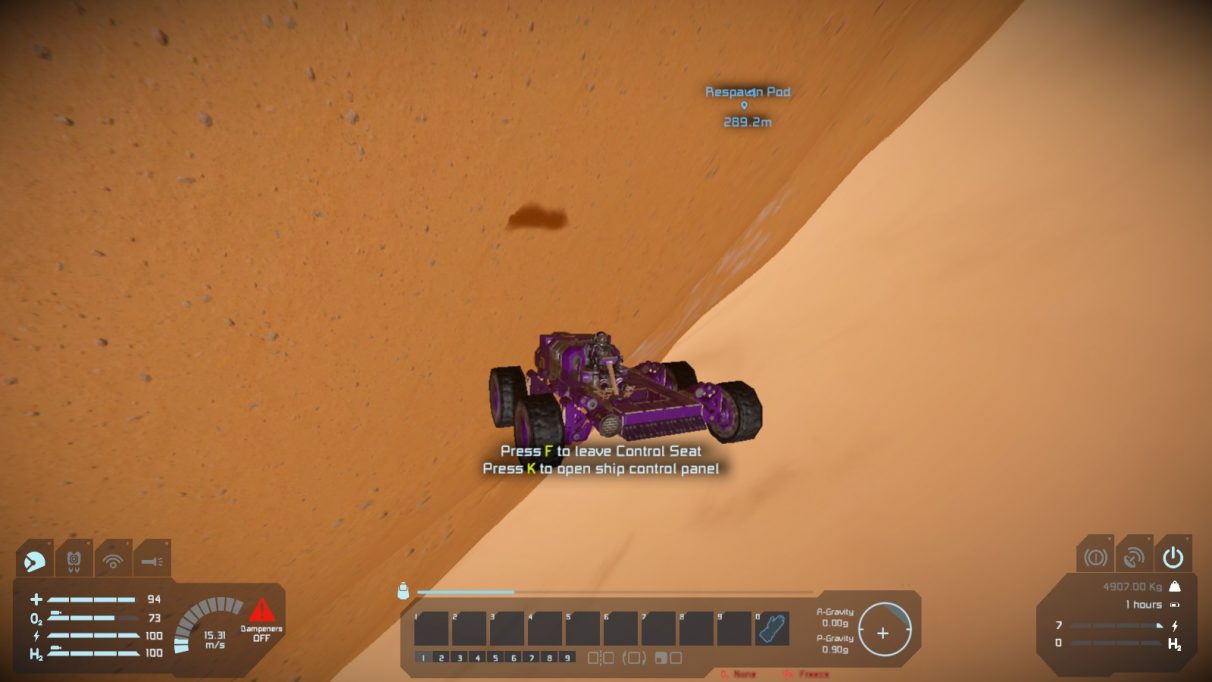 Get in loser we’re going to die

I am very proud of my terrible purple buggy.

Tagged with cars wot go round and round, feature, I know what I'm doing shut up ok, Keen Software House, Space Engineers.