Beating the final boss of a Dark Souls game can be an overwhelming experience. You reflect on your journey, the countless hours and failed attempts that led you to this moment, and a wave of emotion rolls over you.

The Twitch channel of Eric “McRaptor” Harper was host to a litany of these moments during the recent “Souls-4-Souls” (SFS) charity tournament that ran in late April. When you think of competitive gaming tournaments, Dark Souls probably doesn’t spring to mind. However, SFS featured 25 challenge runners racing through Soulsborne games as quickly as possible whilst trying to take zero hits. Thousands tuned in to watch.

A team of commentators ebbed and flowed between serious play-by-play analysis, in-jokes, puns and profanity. Whenever a player took a hit, they’d consistently react with shock, understanding and empathy. Hitless runs are often long hauls, sometimes with long periods of downtime, but moments like the streamer “Vahiguru” ducking under a halberd charge are sold by the hype explosion that follows.

Best of all are the endings, where the runners often have visceral and physical reactions as they cross the finishing line. Streamer “Cosmicbourne” burst into tears after beating Dark Souls 2 without taking a single hit. Fellow streamer “Dinossindgeil” fist pumped and beamed happily after he beat Dark Souls with just one hit taken, getting a big hug afterwards.

Harper, a 37-year-old financial analyst living in Chicago with his wife and three children, is the veteran organiser of over a dozen hitless tournaments. SFS raised over $16,000 for United Way and Save the Children, by far his most successful fundraiser to date.

Harper’s events are entirely volunteer-run. For SFS, he did the majority of the organising, with a team of six volunteers helping out during the livestream alongside a rotating cast of commentators, and funded a prize pool of $300 for the winning team.

He got involved with Twitch around 2014, initially to watch Starcraft 2 tournaments, and got interested in the hitless community through a player named “The Happy Hob”. Hob is recognised in the community as the first person to get a successful hitless run of a Soulsborne game back in February 2016.

“The thing about Dark Souls, while it’s a smaller community compared to [other] big games on Twitch, it’s really tight-knit and all the streamers and all the viewers really know each other,” Harper told me.

Whilst he described hitless runs as “amazing” journeys, he was frustrated that runners could often spend hours and hours on runs, resetting multiple times, whilst rarely generating good clips for platforms like YouTube. He tried to solve this problem with tournaments, where one single mistake doesn’t upend the entire competition.

“If somebody has a bad run, there’s an insurance policy against [people clicking away]… if something’s boring, people aren’t gonna stick with it,” Harper said.

Harper consulted hitless runners to determine the rules for his tournaments, turning the hobby into what he considers “a real athletic event”.

Hitless runs are hard enough to begin with but, as streamer “SquillaKilla” explained to me, tournaments introduce competitors, teammates, prizes, charities and commentators into the equation. Most significantly, they introduce a time-pressure to what’s normally a self-paced challenge run.

Squilla, who asked to be identified by his online handle, is a 25-year-old streamer from Ontario, Canada, a member of Harper’s talent agency and the holder of 22 world-first hitless records, according to the Team Hitless website. Alongside The Happy Hob and streamer “FaraazKhan”, Squilla started Team Hitless to archive successful runs and provide a platform for smaller streamers.

The Hitless community has almost 160 members as of writing, and Squilla is responsible for manually reviewing most submitted runs, alongside fellow members such as “Vswed”, “Lethal” and “GoesOnGhost”.

Ghost, a streamer from New York who also requested to go by her online handle, was the first woman and disabled person to join Team Hitless. She has one hand, and completed her first hitless run of Bloodborne after two months, adapting existing strategies to accomodate for her disability. For example, Ghost told me via text chat that she heavily relies on the game’s lock-on function since “some bosses are so chaotic that it’s harder for me to fight locked off”.

Finishing the run “was pretty emotional” for Ghost, who told me the community response to her achievement was “very positive and supportive”.

“I’ve made many close friends through this team. I found this community during a very tumultuous time in my life and it was an essential anchor during that time,” Ghost said.

The amount of detail that goes into a successful hitless run is exhaustive. Squilla has published instructional videos for no-hitting Dark Souls and Dark Souls 2, drawing off his own research and the wider community to explain fascinating strategies, like the exact angle to safely push an explosive barrel off a ledge in Dark Souls 2.

The runs themselves are also serious time-commitments. For Twitch streamer “OkayitsLiz”, a 24-year-old Florida resident who preferred to use her online handle, it took an estimated 400 hours of playtime to get her first hitless run of Sekiro, and that’s after she’d already played it for around 125 hours.

Liz is a full-time streamer and acknowledges the large time commitment as a barrier to completing a successful hitless run. However, she insists that they aren’t as difficult as they might seem.

“It’s just a different mindset,” Liz said in a call, citing her reliance on unusual strategies that players wouldn’t normally learn. For example, bosses in Sekiro can be manipulated by specific player actions to repeatedly cycle through a limited number of attacks, making certain fights much more predictable. 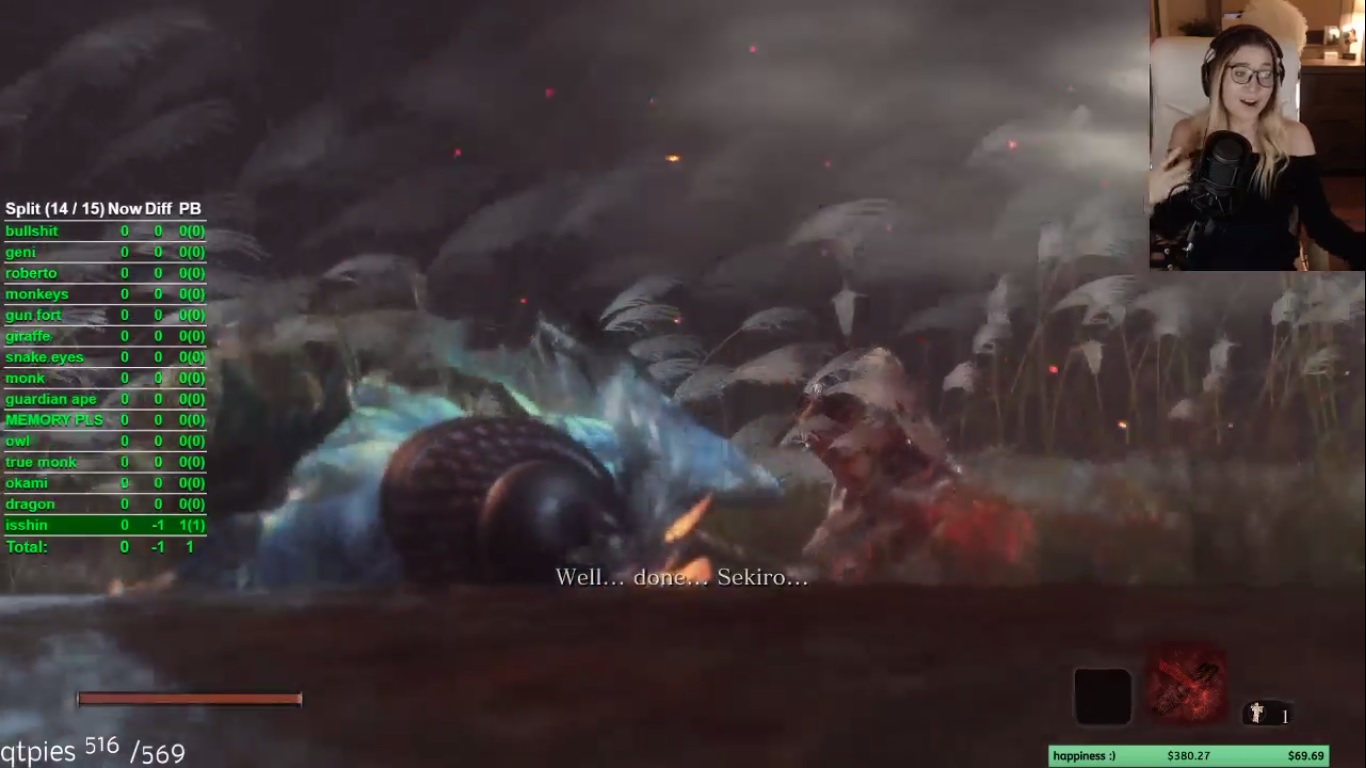 “I would wake up some days and I would dread it… [but] every single time I got past a boss I was like: this is why,” Liz said, describing it as “this insane feeling of elation”.

The community is mostly male and Ghost estimates she is one of eight women on Team Hitless. “It feels special to be a disabled woman in a gaming community” she said, “I think it’s important to know that all sorts of people play video games.”

Liz agreed with Ghost’s estimate and described the community as a “boy’s club”, although she was keen to emphasise that getting involved with it was “probably the best thing that’s ever happened to [her]”.

Even when you know every route and every strategy perfectly, heartbreaking mistakes are par for the course. Squilla reminisced about an all-boss run he failed because of a last-minute finger slip.

“Your hands are getting sweaty, you’re getting shaky, and then it’s over. Something like that, it’s hard to come back from,” he told me.

“Otzdarva”, a Twitch streamer from Spain who requested he go by his online handle, knows this feeling all too well. He failed a no-hit run of every boss in Dark Souls 2 at the very end, after almost 12 hours of playtime. It would have been a world-first.

“At that point, I was just very, very aware that there were about six or seven thousand people watching me and that they were all going to be extremely fucking heartbroken,” Otzdarva said in a call.

It took Otzdarva almost 90 attempts, some of which were over six hours long, and three attempts at the final boss before he finally completed the challenge in March 2019. It’s a wonderful moment: a chorus of Discord commentators erupt in celebration while Otzdarva beams with joy, the culmination of what he estimates was over 1500 hours of preparation.

“Getting it was like a big chunk of reassurance, a big chunk of catharsis for me… it was extremely, extremely joyful,” Otzdarva said. “[The run] was a collective effort. It was months and months of routing.”

SFS was Harper’s first tournament in a year. He told me he got burnt out by the frustrations of trying to secure consistent sponsorship, the sheer effort involved in running tournaments with volunteers and, most of all, the difficulties of corralling more independent-minded Twitch streamers. Covid-19 was his incentive to return.

“We don’t have enough ventilators; people are literally fucking dying across the world,” Harper said before the Souls-4-Souls charity event. “This tournament gives people a reason to support those people out there in the world in any way that they can afford and it also gives them a distraction, a very necessary distraction.”

Harper is fatigued but in good spirits when we talk after SFS, joking about his children doing their own hitless runs in Roblox and proudly describing his son beating the Asylum Demon for the first time. He’s still keen to get a sponsor for his tournaments but he thinks the events can continue without them thanks to viewer donations. 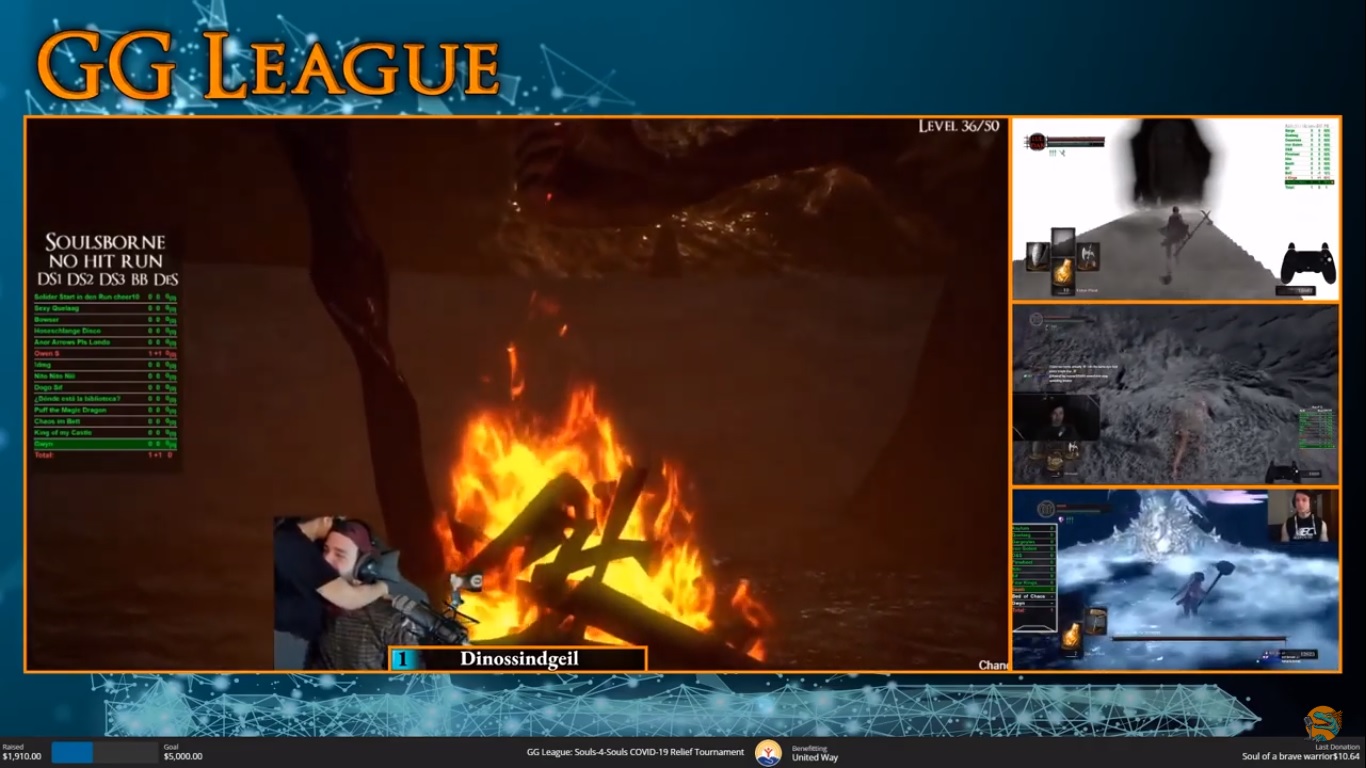 However, his desire to increase the professionalism of the events is at direct loggerheads with the “degen” (i.e degenerative) sense of humour that some community members label themselves with. Still, part of Harper likes things the way they are: he believes the small size of the community keeps it friendly and reduces toxicity, also acknowledging that some of these streamers are quite young.

Harper would like to see the hitless community expand past From Software games, having previously run no-damage races for games like Resident Evil 2 Remake, and hopes to see more competitive PvE content on Twitch in the future.

“If an opportunity comes up for me to run or participate in a bigger organisation as well, I would love to do that… but I will never forget my roots. I will always want to run these community events,” Harper said, describing them as “a high that you can’t replicate”.

Harper has organised two tournaments since Souls-4-Souls, including a deathless speedrun competition held in the closed beta of upcoming Souls-like Mortal Shell. And thanks to a fundraising incentive for SFS, Harper attempted his own bow-only hitless run of Dark Souls 3.

“Oh my God man,” Harper laughs when I bring it up. He used to be a hunter in World Of Warcraft, but he doesn’t fancy his chances. Squilla was the first person to successfully do this run, and Harper has watched his video “over and over again”.

The community continues to push the boat out with new and increasingly difficult challenge runs, spreading its wings beyond the Souls games that have defined it. That being said, all bets are off when Elden Ring comes out.