I’ve been mucking about in mountain biking game Descenders. It’s a muddy, roguelite take on bicycles wot go fast, with the twin sticks of your gamepad responsible for steering and stunting on dirty downhill trails (keyboard controls aren’t in our copy but they will be when the game comes to early access on February 9th, we’re told). Here’s eight silly reasons to play it, based on my tumbles in the press build, all in the form of skillful GIFs. But also some reasons to maybe pull the brakes on that decision.

2. The courses are full of amazing ramps

"I can get behind this."

3. The trail is marked with handy signposts

4. You leap over a moving train!

5. It rewards calm and balance

But it's also important to look ahead.

6. You can go off-trail whenever you want and broaden your horizon

Behind that horizon is a rock.

7. Crossing the finish line is satisfying

8. But sometimes you really… BALE

Although sometimes you don't.

Yes, much of my experience with Descenders was spent entertaining its physics engine. This provoked many laughs. It's a downhill test of skill, control and knowing when to hold back as much as when to let the tires kick up dust. But I also have reservations about its current (unfinished) form. So please indulge my post-GIF observations.

Firstly, let's explain how it works. There’s a roguelike approach to progressing between its procedurally generated tracks. Some trails are strewn with stunts, others are set on steep hills, and others are winding paths. But most are mixtures of all three elements, with trails named things like “Steep stunts” or “Mellow curvy race”. You only get a handful of lives. Lose them and the “session” is over - back to the start. But completing bonus objectives, for example, finishing a race in 35 seconds or doing two backflips, will earn you an extra life when you finish the track. Beat the final track of a “world” three times and you’ll unlock the ability to drop straight into the following world, rather than starting from the very beginning. 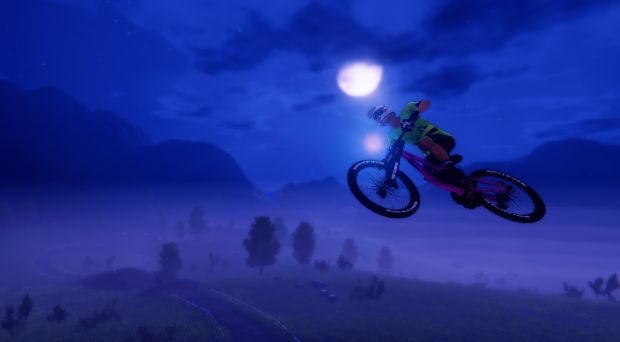 While similar extreme sports games might have a library of tricks – OlliOlli will always be one of my favourites – Descenders is content to give you a limited set of techniques to hone and improve. Bunny hopping is an easy up-down flick of the joystick. Moving your bike in mid-air lets you rotate in dangerous and ill-fated ways. Skidding is introduced very early. To do this you lean into a turn with the right stick. But for an entire second afterwards (a second is a long time in mountain biking) your control is stifled. It’s designed so that you’ll skid to round corners more efficiently, but you’ll also have to release the skid at the precise moment the path ahead of you straightens out.

This didn’t work for me. I stopped bothering with the skidding mechanic when I realised that the normal turning was good enough, and didn’t slow me down all that much. I found the feeling of suddenly being unable to turn your otherwise light and responsive bike more an irritation than an inviting challenge. It was like the handlebars were sabotaged every time I tried it. The reward for successfully pulling off a skid felt negligible when compared to the inevitable crash or slowdown that followed a badly implemented one. 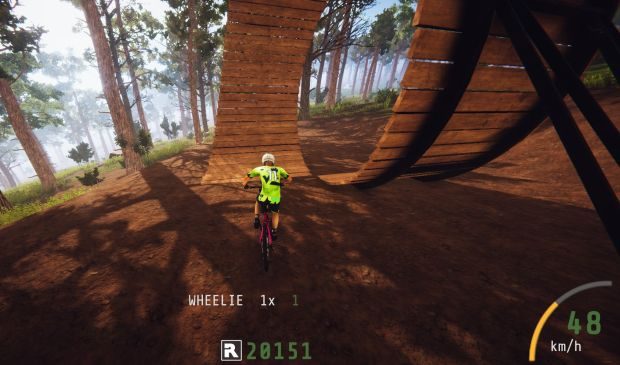 It’s also a little too light right now. For a couple of hours, it’s good for a laugh and a small challenge, but there’s hardly any flesh underneath all this grazed skin. The roguelike-inspired level trees feel more like window dressing than a vital feature. Even the last branch on the level tree takes on the wording of the roguelike, calling its final leap the “boss jump”. It’s a fun nod to another genre but that’s all it really is. Roguelikes of the current era tend to unlock new skills or abilities, so that each attempt becomes more varied, more bloated with possibility. Here, the goodies you earn are cosmetic – new shirts, new goggles, new bike skins.

That might appeal to anyone wishing to avoid the grind of increasing stats, but I felt like my progress never affected or changed the way I careened downhill, like I understood everything possible in the game within the first 10 minutes. In the end, the roguelike elements are a limb that has been transplanted from one genre to another with semi-success. The fingers twitch a little, it looks anatomically correct, but the hand has no mechanical use – the tendons don’t work. 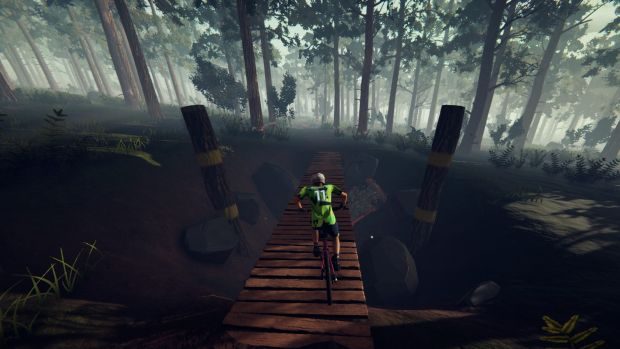 Descenders currently works best when it’s being frivolous, or when you’re being frivolous with it. Sometimes the tracks are full of daft obstacles like castles and trains and pitfalls and loop-the-loops, and in these moments it can feel like the physics-based lovechild of Trials and Mat Hoffman’s Pro BMX. All quick restarts and stifled cursewords. But it also reminds me a little of Steep, the open world snowboarding game. Yes, it’s handsome, it's speedy and it taps into an under-represented sport in videogames. But for me there’s something missing. A focus or a feature, I don’t know. As an early access game, it’s got time to find some extra bits to add to this lightweight frame. I hope it does, because making GIFs of bad falls is still fun.

Descenders will enter early access on Steam on February 9th.