At Gamescom I had a (hands off but up close and personal) preview of Shortest Trip to Earth, a roguelike space survival game that is due to go into Steam early access later this year. The team lead, Edvin Aedma, who also wrote RPS favourite Teleglitch, played, whilst I watched and made demands about what our crew should do next. I wondered why I couldn't just play it myself, but then I realised, oh, this is a lot,

In Shortest Trip to Earth you, a crew of volunteers in deep, procgen space, are trying to make the shortest tri- you probably get it. Every time you die you start over again with a new ship, a new crew, a new universe. Comparisons will be made to FTL, because it has similarities. But gosh, I’m more drawn to this than I ever was to FTL.

The macro view of a star system shows your Mothership as a little dot, exploring other dots. The micro view zooms down to said ship, where you can see all your crew ambling about doing things, and assign them to other stuff if you want. The ship has a bunch of modular blocks for things including your engine, medical bay, weapons and so on. So far, so FTL, I spose? But there’s so much more to this. So much detail. Shortest Trip to Earth seems to have less emphasis on RTS and more on creating a rich tapestry of exploration and survival - of the player creating their own story of desperation with occasional space whales. It’s the sort of game that you won’t get good at until you’ve put hours into understanding it, if that’s what you’re into. It’s the kind of roguelike I can get behind. Here is the story of my Gamescom preview: 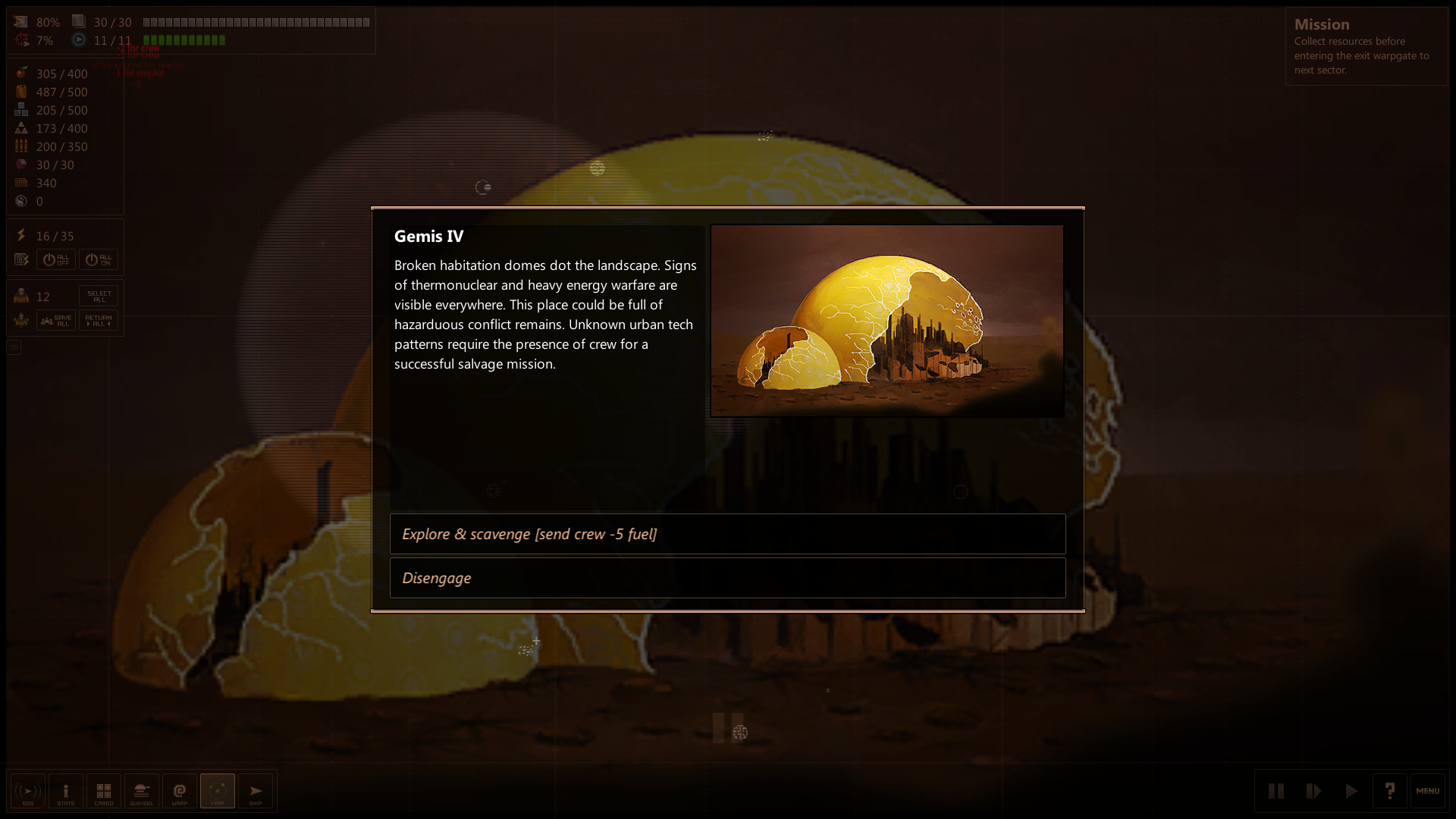 Day One
We awoke from our frozen sleep like the most space-exploringest ice lollies ever. Apparently we’d been in cryo for five years! That’s a lot more years than we had anticipated. We’re a long way from home, so first order of business was looting every planet in the star system we found ourselves in - careful to make our approach to them avoiding asteroid fields, as they would damage the ship. Some ship wreckage floating aimlessly in various orbits suggested pirate activity! We proceeded with caution, and did get some fuel, which is a critical resource.

Day Two
Today the events ticker notified us that the Mothership’s AI started a hobby: nude drawing. This doesn’t have any bearing on the mission, but it did make me happy.

Day Five
We made a warp jump to the next star system, and found a planet with an Earth-like atmosphere, so we could explore it without too much effort. Using our advanced technology, we were able to harvest a lot of biomaterial without harming a single creature on the planet. Space is vegan-friendly!

We almost got into a fight with a representative of the Rat Empire (who was wearing a spacesuit with little holes cut out for ears) but he was easily bribed with the exotic goods we were carrying. They were a bonus we’d brought on board at the original launch of our mission - along with an insectoid mercenary who’s only in the business to support her many, many chittering children. 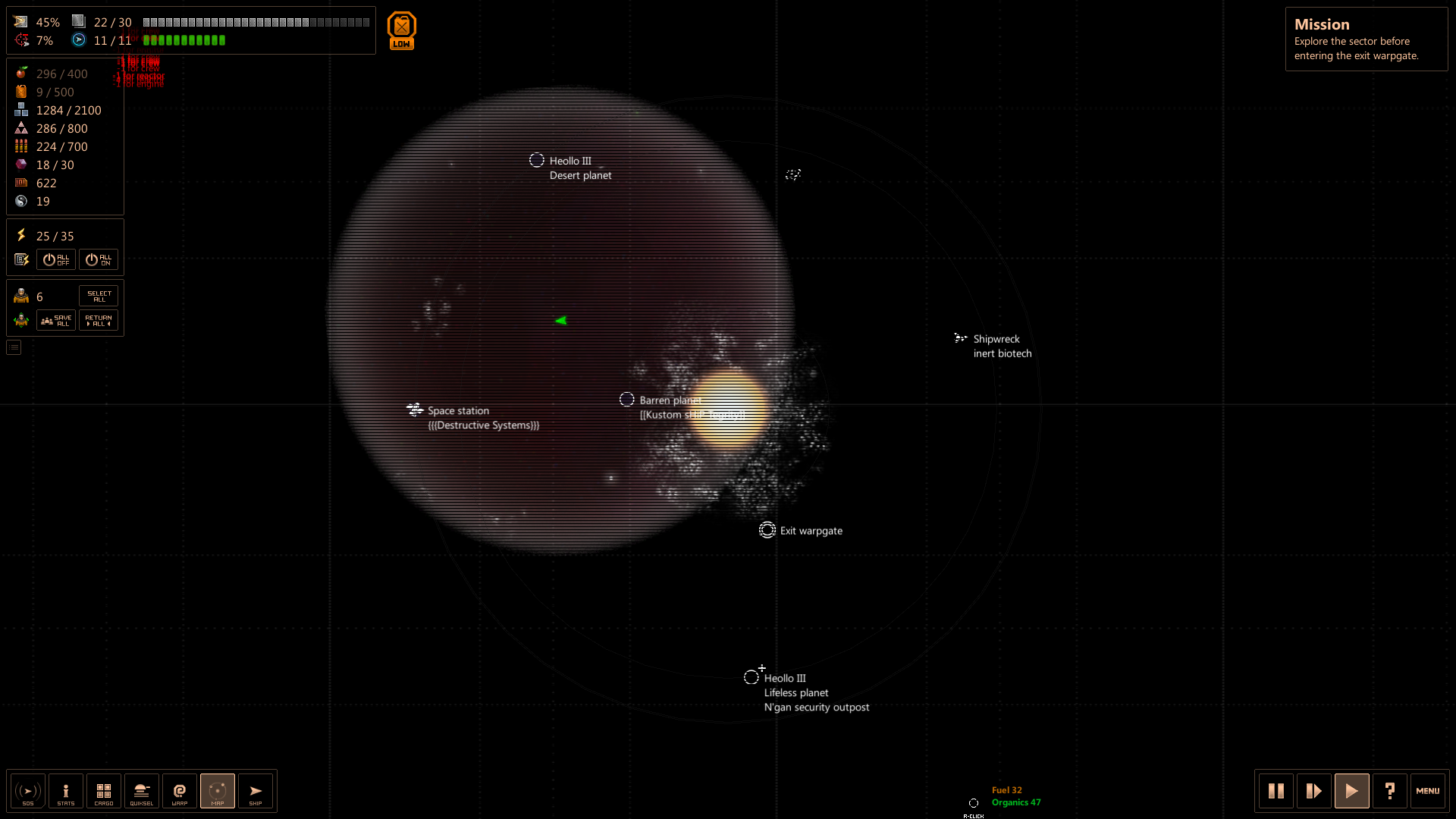 Day Seven
We met a warp creature, a purple and pink floating space amoeboid. It seemed concerned, so we followed it (though there was some discussion around shooting first, asking questions later). It lead us to a cloud of space dust, concealing a big warp whale that had been grievously injured. We used a lot of our recently harvested organic materials to synthesise medicine for it. It recovered, but at the cost of our food supplies. It did send us a telepathic feeling of gratitude, so that was nice.

Day 12
We ran out of food! Many of the crew are starving, and it will take more organic material to get them back to full health. We made the decision to put most back into cryostasis again, to minimise food consumption in general. Only a few of us are left roaming the halls of the ship, along with our pet, whose defining character trait is that it will not do as it’s told.

While the crew sleep, we’re able to read what they’re dreaming of. 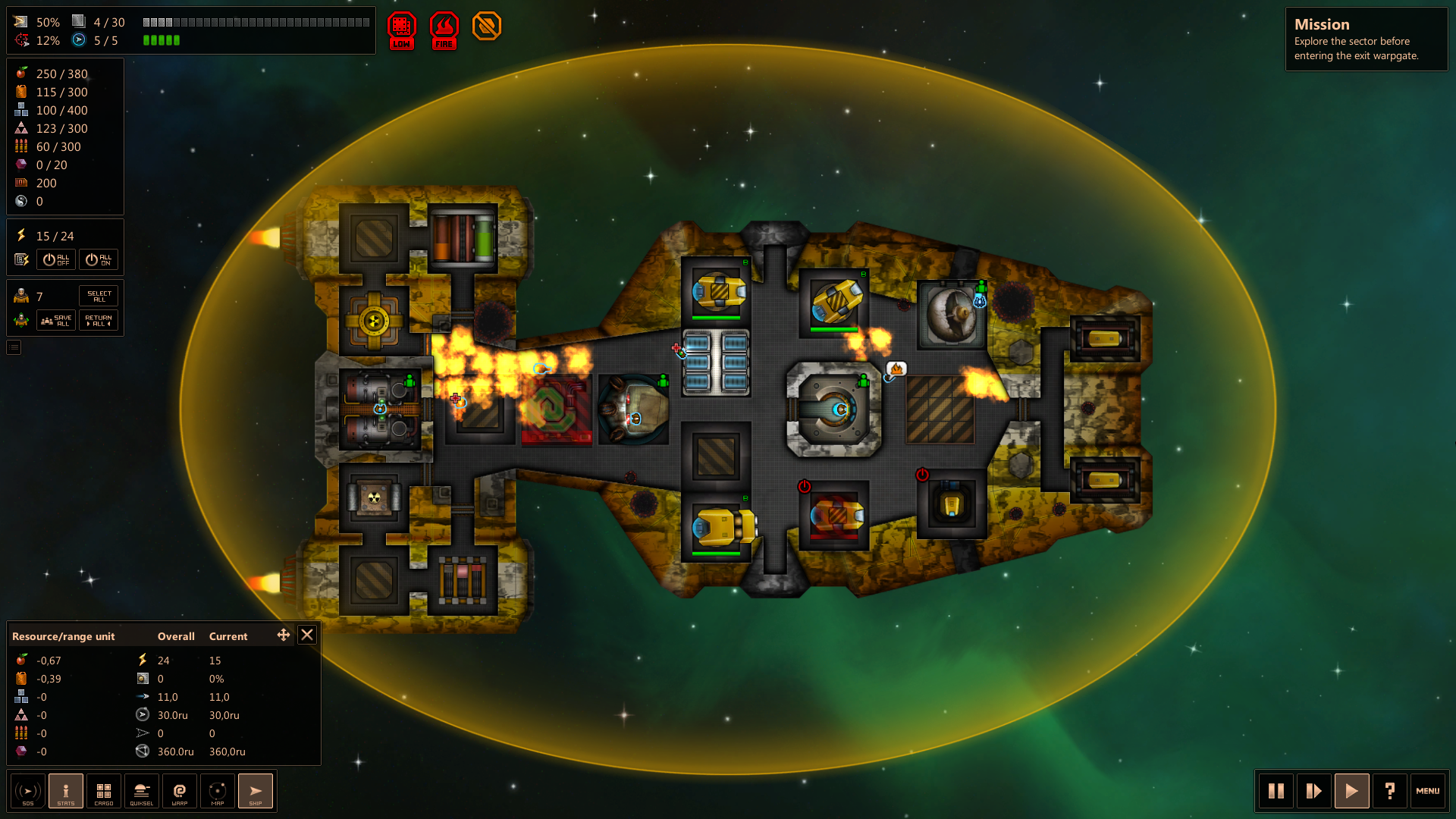 Day 16
We found a planet with a very acidic flavour in general, so constructed some special armour for our drones and sent them down to explore. They melted, so we lost both drones and special armour. Boo. We’re still not able to wake the rest of the crew, but we’ve installed a Shroomery on the Mothership to grow more organics.

Day 22
We’d been getting by on what we’d scavenged, but then we ran into a trader, and we were able to buy more organics from him. Food problem solved! But we have a new problem, which is that we are very low on fuel. This is, in some ways, a more critical problem than running low on food. Or crew.

Day 23
We jumped into the next star system and found we didn’t have enough fuel left to reach any of the planets around us. We scrapped one of our nukes and got our Shroomery to convert excess ‘shrooms to fuel as well. We also turned off one of our engines to minimise fuel consumption. This left us enough to explore some nearby planets. One of them was a post-nuclear war wasteland, and we lost one of the crew when they set off an old atomic warhead accidentally. Others were severely injured. 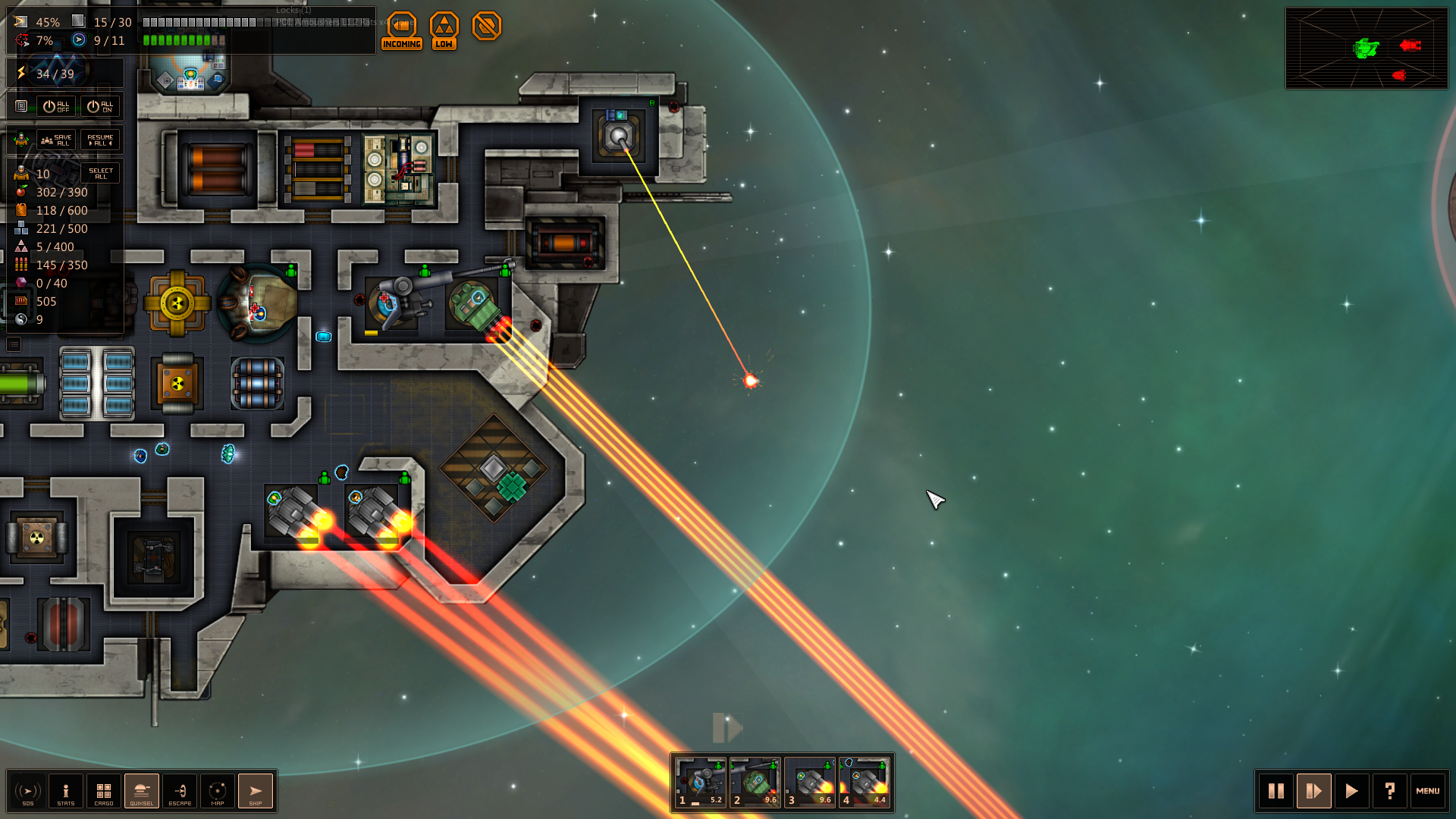 Day 24
We broke into an alien library that had a kind of Hellraiser vibe to its origin story. A crew member triggered a trap, and is now similarly dead. Still no fuel. The fuel situation became more than critical a while back, to be honest. If we run out entirely we’ll just be left floating in the empty void of space, slowly starving to death. Or just all left in cryosleep again, dreaming of old lovers until - if - another ship finds us.

Day 25
Found a desert planet inhabited by a race of cave-dwelling maggot farmers. They were unable to live on the surface, because an ancient, giant war robot was still active on the surface. We considered carpet bombing it from orbit, but ultimately were worried about the long term effects on the ecosystem. Instead, we sent in a small fire team, and were able to defeat it. The maggot farmers were very grateful and gave us a lot of traditionally cooked maggots. But apparently they have no need of fuel in their society, because we didn’t get any of that.

Day 26
We used the giant lasers we ripped off the robot to absolutely destroy a Rat Empire ship that engaged us in combat, though our defensive turret only just managed to stop their nuke from hitting us. The wreckage gave us enough fuel to jump to the next system, which has a warp gate that will take us to the next sector! Unfortunately, the Mothership took some external damage, which we can’t fix until we find a proper port.

Day 28
We met a smuggler who offered us a great price for our last piece of exotic cargo. When we received payment it was just an apologetic note pinned to barrels of organic sludge. The sector’s final act was to rip us off one last time. 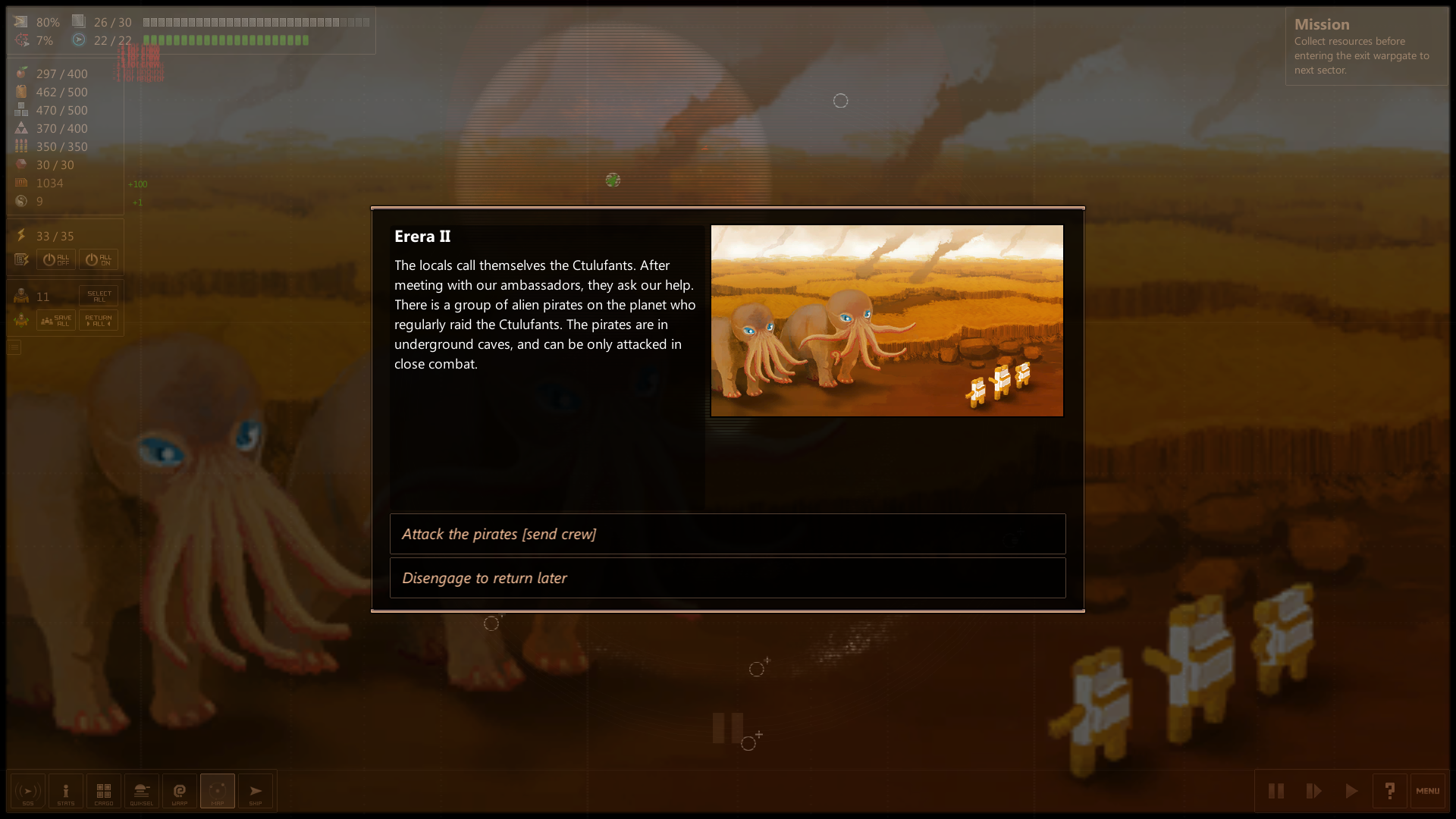 The proof of the space pudding will be in the eating, though; Aedma told me that they plan to have at least 50 ships, over a hundred modules, over a thousand unique pieces of artwork, ten sectors to explore. As it stands, the lovely interaction with maggot farms I had was also had by Sam a year ago. Shortest Trip to Earth is as long as a piece of string, it seems. But lovely string, at least.