"I felt my dream was ripped away from me in front of the world," indie developer Anas Abdin told me, when I asked him about the bizarre circumstances in which he's found himself over the last couple of weeks. "I felt violated, stripped from my own game. Most of all, I felt that my fans and friends had so many questions regarding my authenticity."

Imagine the situation. You've been working on your unreleased indie sci-fi adventure game for over three years, only to see a major new TV show launch using the same specific idea as its core space travel concept. That's the peculiar situation in which independent developer Anas Abdin found himself in when he watched the first few episodes of CBS's Star Trek: Discovery. He's been making a game called Tardigrades, and now Discovery has come along, he's really not sure what to do.

It’s not unusual for the release of a new movie or TV series to bring accusations that the plot is based on a lesser-known work, whether a self-published book, a spec script, an animated short, or something else. So when Abdin got in touch with me to claim that Star Trek Discovery shared some odd similarities with his in-development AGS pixel adventure, I was immediately dubious. His in-development AGS pixel adventure called Tardigrades and which he says features intergalactic travel via the quantum abilities of a giant blue tardigrade... Huh.

Star Trek: Discovery, for those not familiar, is the first new TV series from the Roddenberry universe in twelve years. Co-created by TV maestro Bryan Fuller (Wonderfalls, Dead Like Me, American Gods), it follows the ups and significant downs of Michael Burnham (Sonequa Martin-Green), a Vulcan-raised human science officer on board a bleeding-edge Star Fleet vessel with a unique ability to instantaneously travel to anywhere in the universe, via a quantum "Mycelial spore network". To harness this, the crew discover a symbiotic relationship between the spores and a huge and seemingly dangerous beast that resembles a massive version of Earth's micro-animals, the tardigrade. And so they name theirs the same. The tardigrade allows the ship to make use of the quantum network of spacespores, and at some cost to the poor giant water bear, be anywhere they wish immediately.

Tardigrade, by Anas Abdin, is about an ancient race of Earthlings on the verge of discovering intergalactic travel, via a system using, well, giant tardigrades that allows them to travel to anywhere in the universe.

Star Trek: Discovery was announced on the 2nd November 2015 (although not named until the following year).

Tardigrades was announced on the 8th May 2014 (under the name "Epoch"). It was posted to Steam's Greenlight on the 21st November 2014. It changed its name to Tardigrades on the 22nd February 2015. Nine months before it was even announced there would be a new Star Trek show, Abdin wrote this on his blog:

"Tardigrades, waterbears, moss piglets... call them whatever you like. For me, they are the indestructible. Despite their little size of about 0.012in, they can survive temperatures from just above absolute zero up to above the boiling point of water. They can also survive extreme conditions of radiation and the vacuum of space. They can go without food or water for more than 10 years. Who else can travel space like Tardigrades?"

Abdin's concern is that it's his project that's not out yet. It's his idea that he fears will now look like it copied CBS's. Even if, as is entirely plausible, it didn't happen the other way around either.

Although Abdin definitely is suggesting that it did. His argument starts with the tardigrade: both projects choose to take a specific micro-animal and make it larger than a man, both choose to make it blue, both then choose to have it be the means of instantaneous intergalactic travel.

It could simply be a coincidence. A pool of seven billion people makes unique ideas an unlikely prospect, and random events segregate seemingly non-randomly. While Discovery wasn't announced until a year after Abdin announced his game, and not until nine months after Abdin renamed his project to "Tardigrades", there's every possibility that the show's creative team had been working on the idea for years beforehand or simply came to it on their own. Indeed, put "tardigrade space travel" into Google and you'd perhaps expect to see Star Trek: Discovery dominating the results. But no. What you see instead is years and years of popular science articles about the seemingly invincible little Earth beasties, and their notorious ability to survive in a vacuum. And in space. 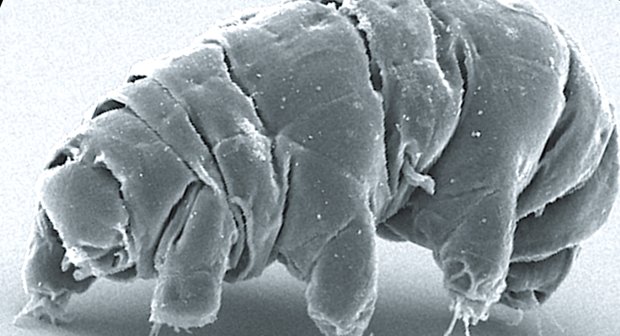 In 2012 the Smithsonian wrote in detail about the tardigrade's potential ability to survive in space, in response to a Motherboard article about an amateur scientist who theorised that tardigrades could have come from outer space. They didn't, of course. They come from Earth. Although they've been to space.

In 2008 a paper was published in Current Biology detailing how scientists with the European Space Agency exposed dehydrated tardigrades to space for ten days, with no deleterious effects. (Although solar radiation seemed to rather polish them off.) The extraordinary creatures were capable of withstanding not just complete dehydration, but also the vacuum of space, and then just get up and carry on. New Scientist reported the study at the time.

In 2011 they were off into space again, as the BBC reported. In 2015 the BBC looked back on this, and talked more about how the tardigrade is able to seemingly revive itself from death. They're a creature that has caught public attention, not just because of their incredible ability to survive almost anywhere, but also because when looked at under a microscope, they're just so damned cute.

It's entirely plausible both projects were inspired by similar ideas and developed entirely independently, regardless of both coming to light around the same time.

But what's more significant right now for Abdin is what he does next. People will argue that he has a legal case, others will contend that it's coincidence, others still will make the case that ideas are to be shared. But for Abdin, a man who combines a full-time job with caring for two elderly parents, it's made devoting his scant spare time to working on his gaming project a lot harder.

"I did not touch my computer at all," Abdin tells me of the days following the realisation. "I was too scared to log on my email or any other social media outlet." He first learned of the issue when, shortly after episode three of Discovery had aired, he received a series of emails and tweets from others within the AGS (Adventure Game Studio) community. Mostly populated by amateur developers who make games for little or no money, the tight-knit group had been following along with Abdin's project since 2014. So when they watched Star Trek, the core storyline seemed immediately familiar.

Abdin said he wasn't even aware there was a new series of Star Trek, but on receiving so many messages, he watched the episodes and found himself enjoying it. Then things got weird for him. "They started to show the "spore drive" and the white dots flying around in a blue room, and I felt something is not right. Then the Tardigrade appearance killed the show for me. I stopped enjoying the show as a story and just continued watching to note similarities."

Abdin notes many more similarities between the show and his game, which to an outsider are perhaps less suspicious than to the developer who's suddenly had the rug pulled out from under him. There's a black female lead in both projects, and a gay couple. Both have a character with blond features that border on albino. For Abdin, this created the impression that Discovery was just taking his ideas one by one.

I suspect otherwise. The tardigrade is unusual, but beyond that the other similarities Abdin mentions could be found in any number of new television series. It seems astoundingly unlikely that Star Trek's producers would have cast the show to match the pixel art of an unreleased game. But it's easy for me to feel detached about this. Not so for Abdin.

"I felt some lawyer is going to call me any moment telling me I cannot continue developing Tardigrades," he told me.

For the unknown developer, this has taken the joy out of his project. "I used to make doodles and pixel art almost daily, and share them via Twitter," he says. "Until this happened. I can't focus on anything. I can't draw, I can't even touch my guitar. Professionally speaking, my work has been affected."

I suggest to Abdin that his belief that he's been borrowed from falls down a little considering how ambiguously he presented the tardigrades' role in his game's plot. His previous posts and videos show a man being wrapped around by a giant blue tardigrade, which then zips off into space with lightning effect. But it was never overtly stated - because he had considered it a spoiler - that the tardigrade would be the civilisation's secret for discovering intergalactic travel. The game was named after them, their role as a main theme was stated, but wasn't the association too unclear for someone to take it without knowing the connections that exist only in Abdin's head?

"No," he says, unequivocally. "Why is the tardigrade huge? And blue? Why is it used for space travel? Why is it used in a blue set with little white dots floating around? This is too much for two people living on different sides of the planet to come up with in a short period of time."

For Abdin, the most important thing is that his integrity be recognised, and his authenticity understood. What he wants is for everyone to know that his ideas were his own, and after that, some sort of answer from CBS. He's contacted them, but previously been ignored. He wants them to respond, to know that he need not worry when they share so many similar ideas.

We got in touch with CBS for this story and they declined to comment.

"My ideal outcome," concludes Abdin, "is to get addressed by the producers and [know that they'll] let me be, to finish my project."