'FTL but on a...' is a formula that sounds like it can just keep on giving, but it's entirely telling that the creators of FTL have moved onto whip-smart micro-turn-based strategy instead of more ship management-based roguelitery. People keep making these things - on a train! on a post-apocalyptic battlebus! also on a spaceship! also on a post-apocalyptic battlebus! - but I can count the real successes on one hand.

Sadly, it seems I won't be grafting an extra finger with 'Abandon Ship' carved into it onto that hand - not unless this Cthulhu vs pirates take on the vehicular surviv-o-RPG format can perform some serious course-correction during its voyage through early access.

Abandon Ship hit early access today, with a full release planned for some point during the next year. It is not, to be clear, a finished game, and the dev claims that more and better stuff is due for it, but right now all I can speak to is whether or not your funbucks buy you a satisfying shore leave right now.

In terms of story, it's about a nameless Seadog With A Destiny who escapes from a group of murderous cultists then flees across the ocean in search of safety and answers, becoming embroiled in naval battles and conflicts with oceanic horrors in the process. Strictly speaking, you're not a pirate, but with its heavy focus on pursuit, cannons, ramming, boarding, on-deck melee scuffles with fishmen and tussles with a bloody great Kraken, Abandon Ship is pretty much Pirates of the Caribbean: The Roguelite.

It makes a few tilts towards simulation, with the likes of ordering crew to bail out water caused by hull breaches and toggling ship-to-ship range in order to make certain types of weapon more or less effective. Silent Megasquid Hunter it is most certainly not, though. In the main, it's about the preservation of hull health and the acquisition of gold in order to buy upgraded gear and crew, with an undercurrent of permadeath and massively punitive random events. Same as it ever was, same as it ever was.

This borrows most of FTL's ideas and mechanics wholesale, everything from crew specialisms to praying the hull will hold until you can find a repair station to having to make a certain number of 'jumps' before you can move onto the next area. But outside of theme, there's not much fresh invention in the mix. Instead, there's a thick layer of blubber wrapped around the tried'n'tested formula. 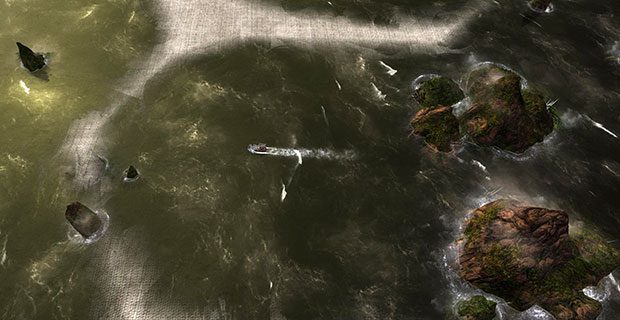 Let's take those 'jumps' as an example. In FTL, you have no direct flight control, but instead hop between a certain number of points on the galactic map before you can move to the next system. At each step along the way therecould be a fight, a multiple choice dilemma, a freebie or a shop. To its credit, Abandon Ship strives for something more involved and freeform.

You're not jumping from point to point - you click to steer your ship around a large and roiling ocean, prettily presented as if within a vast and animated picture frame. Each new area is occluded by a canvas-like fog of war when you enter, which you clear by slowly and painstakingly moving through it, increasingly desperately hoping you'll uncover one of a handful of icons before you enter a fugue state. It looks very nice, but, like catching an overnight ferry from Dover to Calais, the initial excitement gives way to an abiding tedium. Some of those icons attain needle/haystack status - it desperately needs more of them, and perhaps for them to be roaming ships rather than static icons.

Once found, each icon will trigger either a fight, a handful of gold, a shopping port or a random event. Complete a certain number of these encounters and the gate to the next area will magically open. There's little attempt made to justify this, which is sensible given that there are only so many ways one might say 'Because reasons.'

And that's it. That's all there is to sailing in this boat game. You click tediously around this pretty-but-empty map, waiting to stumble across an icon that will make something happen for a brief moment, and when you've done this enough times you get to go and do it all again. Icon variety and frequency does amp up somewhat as things wear on, plus there's a deathclock which results in pursuit if you've not moved on before it expires, but it's still a slog. FTL has the same structure, but where that was punchy and rapid, this suffers from an inordinate amount of downtime and hollow repetition. One's a bullet train from Tokyo to Osaka, the other's a National Express coach from Coventry to Middlesbrough. 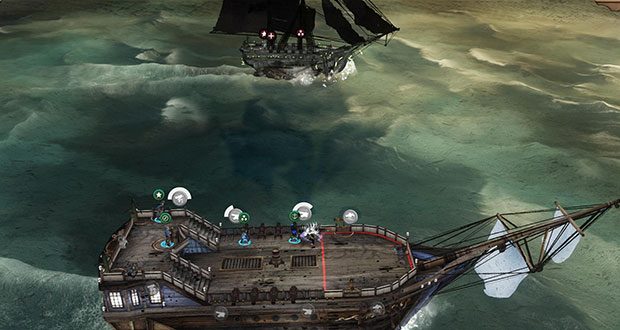 Devs Fireblade Software seem conscious that there's work to be done, claiming in their release notes that "while all areas of the game will be added to and improved, we expect the exploration mode to receive the most attention." I.e. more locations, quests and events and, I hope and pray, a sense of dynamism and life rather than a dour icon-hunt.

Unfortunately, in terms of what your money gets you right now, combat is not the saving grace it needs to be. Again like FTL, it's ship-to-ship battles in which you order the crew around rather than directly manoeuvre the craft. Your vessel is locked in place at the bottom-centre of the screen, with 'speed' interpreted as selecting from four buttons to affect how close or far away you are from the enemy ship, which it is forever perfectly parallel to. Where FTL got by on abstraction thanks to its simple-but-effective 2D art and use of frames and cutaways, Abandon Ship's faintly impressive full 3D makes the ships seem as though they're unnaturally frozen, which robs the battles of any urgency and hammers home the fact that all you're really doing is waiting for cannon timers to expire.

Fights are real-time but dependent on cooldowns and rapidly re-assigning crew between weapons and repairs. Oxygen leaks are here replaced by flooding, which means you need to assign someone to pump the invading sea out in addition to patching up cannon-fire holes in the mist of a fight. There's familiar and vital desperation to this element, but the broadsides suffer from the same hollow waiting that exploration does, as well as a sense of powerlessness.

You can pelt the enemy with cannonballs every thirty seconds, sure, and choose whether to target sails (to prevent escape or enable you to move close enough to board) or crew with ancillary weapons, but right now there isn't much in terms of minimising hull damage. You just have to take your lumps, hope you don't get killed too quickly and that you can randomly stumble across enough gold-icons to fund fixes and buy upgrades afterwards.

Clearly in this pre-technology setting we can't have healing rays or countermeasure drones but some option to manoeuvre might make it feel less like slow death by unavoidable attrition. If you've got a crew member assigned to the wheel, you can choose to flee, ram (if close enough) or turn around, but the latter is only really useful if you've got different weapons on the other side of the ship. And all of these are on long, long timers too. Too often, death felt like a blessed release from waiting to be allowed to press a button, which is the last thing you want to feel in a game that is specifically about avoiding death.

In some respects the slowness suits the theme, but when it's there alongside the glacial nothingness of exploration mode, it all adds up to a sense of time-wasting rather than masterful and commanding thrills. And the less said about the tragically formulaic and repetitive kraken battles the better, I'm afraid.

All that said, this is but the first volley from an early access cannon that will apparently keep firing for 9-12 months, and with every intention of addition and improvement. There is most definitely a platform for good things here, particularly in terms of the often delightful presentation, but I fear it needs a significant revamp of its desperately dull exploration mode, while the realtime combat needs to feel less like mechanical turn-taking. So don't book passage on Abandon Ship just yet, but let's hope its hearties will be capable of more avast further down the line.