We've only just started exploring the newly released Discovery Tour for Assassin's Creed Origins, but there's something we thought you should know. Gone entirely are all the marble boobies and winkies. For what we can only assume are "educational purposes", the game's many statues have been rather daftly covered up by a plague of seashells.

Ubisoft's stated goal with the Discovery Tour is to take advantage of the four years of research that went into their meticulous recreation of Ptolemaic period Egypt, and offer a mode that lets you explore the game in a non-violent, educational way. Guided tours of every corner of the game (there are billions of them) provide information about the period, architecture, people and so on, in rather silly MOVIE TRAILER style voices.

And fantastic, because goodness knows it seems such a waste to fill Ubi's intricate cities with just four hundred and thirty-three thousand fetch quests, then abandon them for the next year's. But almost immediately upon starting, as I was told some quite astoundingly dry and disjointed facts about the building of Alexandria, I spotted that something rather odd had happened since I was last there. Someone rather prudish had been making handy with the shell art.

As if former US Attorney General John Ashcroft had been let loose in Ancient Egypt, each and every naked or semi-naked statue that adorned the cities has been censored for the blushed-faced.

And it has been done in the most entertainingly lame way, with the exact same sunray venus seashell crudely glued over every penis and breast, to the point where it looks splendidly farcical. 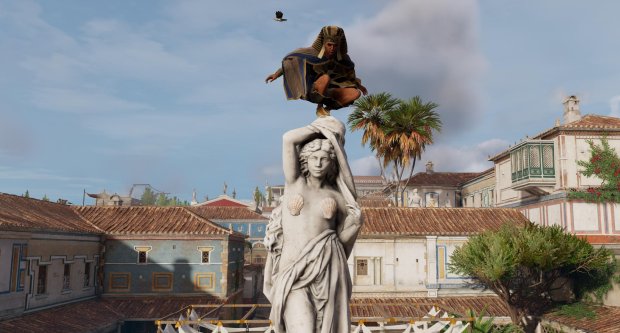 Presumably, and we've not troubled Ubisoft for a comment, this was done to stave off the inevitable idiocy of all three people out of a potential seven billion who would complain to their local state senator that school children were being encouraged to look at historically accurate depictions of a city in their history lessons.

With the hope that the game would be used in schools, someone somewhere, hopefully with their head in their hands, said, "Folks, we're going to have to update the statue textures for the sake of our migraines. Please, for goodness sakes, put the absolute minimum effort into this."

And so it is! No risk of a teenager accidentally seeing a naked breast any more. Nor indeed a cartoon depiction of an ancient statue's flaccid penis, GOD FORBID. Imagine the horrors.