In the distant past of four or so years ago, buying a gaming laptop was simply a cooler, sexier way of saying you're getting a desktop replacement. They were huge, monstrous great things with often chunky, off-the-shelf chassis shells that would break your back almost as soon as you clapped eyes on one. That's just the way things were.

Then, in the hallowed year of 2016, Nvidia announced that not only were they bringing their GTX 10-series of graphics cards to laptops, but that those hulking gaming slabs of yore would finally, finally look like 'normal' notebooks. Ones you could pop in a bag and not automatically cripple yourself with a slipped disc; ones you wouldn't be embarrassed about getting out at the airport or on the train; ones that, you know, actually functioned like laptops are supposed to. And during that time we've seen some very nice gaming laptops indeed, from the Razer Blade 2018 to the Alienware 13. But none, I dare say, come close to matching the Asus ROG Zephyrus S, which is, by somewhere in the rough region of 0.00511232347mm, the world's slimmest gaming laptop to date. Let's take a look.

Measuring a mere 14.95mm at its thinnest point (and 15.75mm at its thickest), the Zephyrus S is the even titchier follow-up to last year's laptop of the same name, now with an extra 'S' (presumably for 'super slim' or something). Indeed, if you're the kind of person who likes percentages, Asus were keen to point out during my hands on demo session that this year's Zephyrus is 12% slimmer than its predecessor. It's not just the laptop's overall thickness that's been given the squeeze, either, as Asus have also shaved off some extra bulk around the laptop's 15.6in display, effectively stuffing everything into what would ordinarily be a 14.2in chassis.

This kind of belt-tightening isn't unusual in this day and age, of course, and ultra-slim laptop makers have been doing this sort of thing for years. Still, it's a welcome development nonetheless in a laptop such as this, particularly when its all-metal chassis makes it feel lovely and cool to the touch. It's still a rectangular slab, but one that looks and feels every bit of its £2000 price.

Yes, the Zephyrus S isn't cheap. But a large part of that - building materials and fancy new heat pipes and cooling innards aside - comes from what's packed inside it. There will technically be two configurations available when it launches in mid-October, with more spec refreshes in early 2019 (I think you can probably guess why *cough*Nvidia Turing*cough*), but the one arriving in the UK will come with the spec listed below. There will also be a US exclusive spec that adds a Max-Q Nvidia GeForce GTX 1070 chip to the mix for $2500, but otherwise you're looking at the same processor, display, RAM and NVMe SSD.

Of course, a 6GB GTX 1060 might not sound very powerful considering its price, but when the display only has a 1920x1080 resolution, you really don't need anything more if you're after 60fps at max settings. You will, probably, need to lower the settings slightly if you want to take full advantage of its 144Hz refresh rate (which, by the way, has been increased from the 120Hz refresh rate found on last year's model), but I suspect you'd only need to do this on beefier games that are particularly graphics intensive. Competitive games that are often less demanding will probably be fine, but we'll have to wait and see how it fares once I get one in for some proper testing. 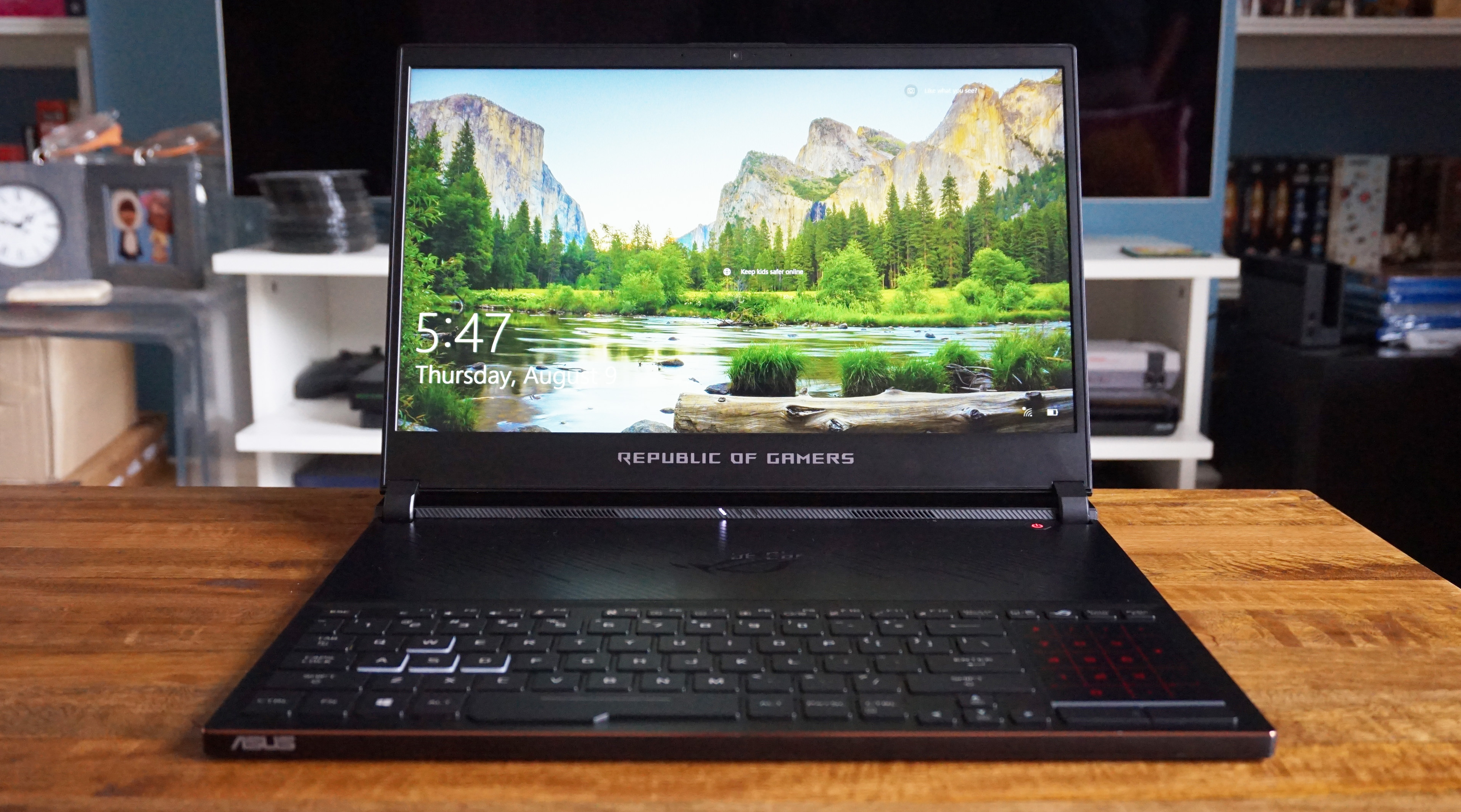 Asus also claim that the laptop's AHVA panel will cover 100% of the sRGB colour gamut. Again, there's no way to tell how accurate that is until I can plonk my own calibrator on it to double check, but I must admit that I wasn't overly wowed by the screen in my hands on demo session. Colours looked okay, but didn't exactly blow me away with their vibrant intensity, so I'll be interested to see if Asus' claim holds up once I get one in for testing. The model I was looking at was a prototype, admittedly, so things may well get tuned up between now and launch.

It's also hard to judge how much noise the Zehpyrus S will make under load, but at least Asus have a few tricks up their sleeve to try and mitigate any potential lift-off scenarios. Borrowed from the original Zephyrus, opening the laptop lid will open a cheeky little vent round the back where it can draw in more air. Asus have also added an extra vent on the right hand side of the laptop that brings air through the keyboard, and its dual fans now have 83 blade apiece - that's 17% more than last year. 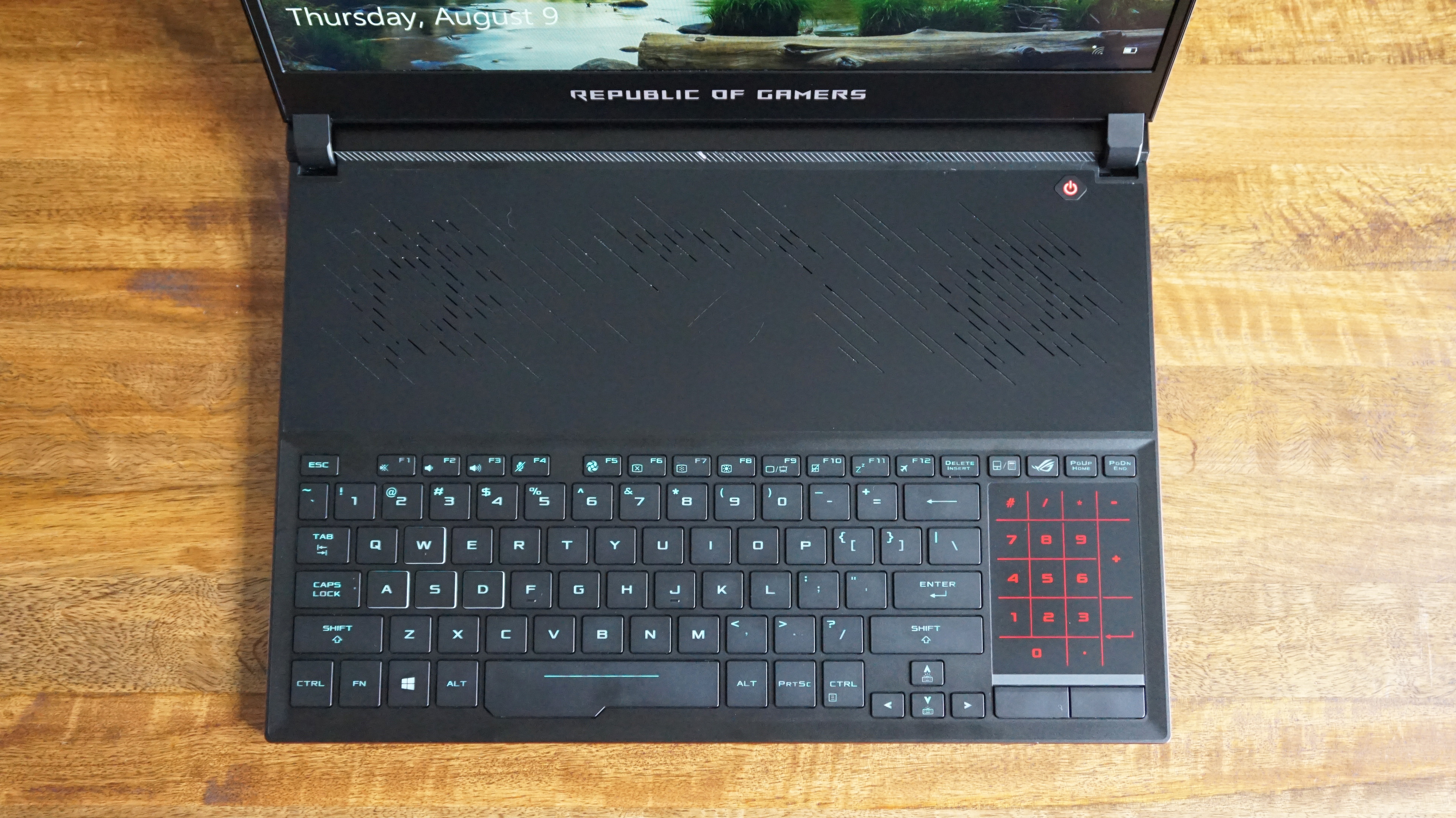 As you've probably noticed, the Zephyrus S' keyboard has been shunted down the front, allowing it to get all nice and cosy with its squished touch pad that doubles up as an LED number pad. This is to help facilitate the laptop's cooling bits and bobs even further, giving Asus more room to bung in extra heat pipes. Indeed, there are five heat pipes in total that are pulling hot air away from the CPU and GPU, and Asus even showed me cut-open versions of the individual components to show me how they worked and sat inside the laptop - imagine a kind of sideways figure of 8 with two dedicated heatsinks for the CPU and GPU in the middle of each circle above the keyboard and you'll have some idea about what's going on in there.

It certainly looks impressive, but when all you're presented with is the Windows 10 desktop, it's hard to say how effective they'll be in practice when you're Super Shotgun-ing Doom demons in the face. You will, however, have three keyboard shortcuts to help give the fans an extra boost, however, including an Overboost mode for maximum performance, a Silent mode, and a Balanced mode that lies somewhere between the two. 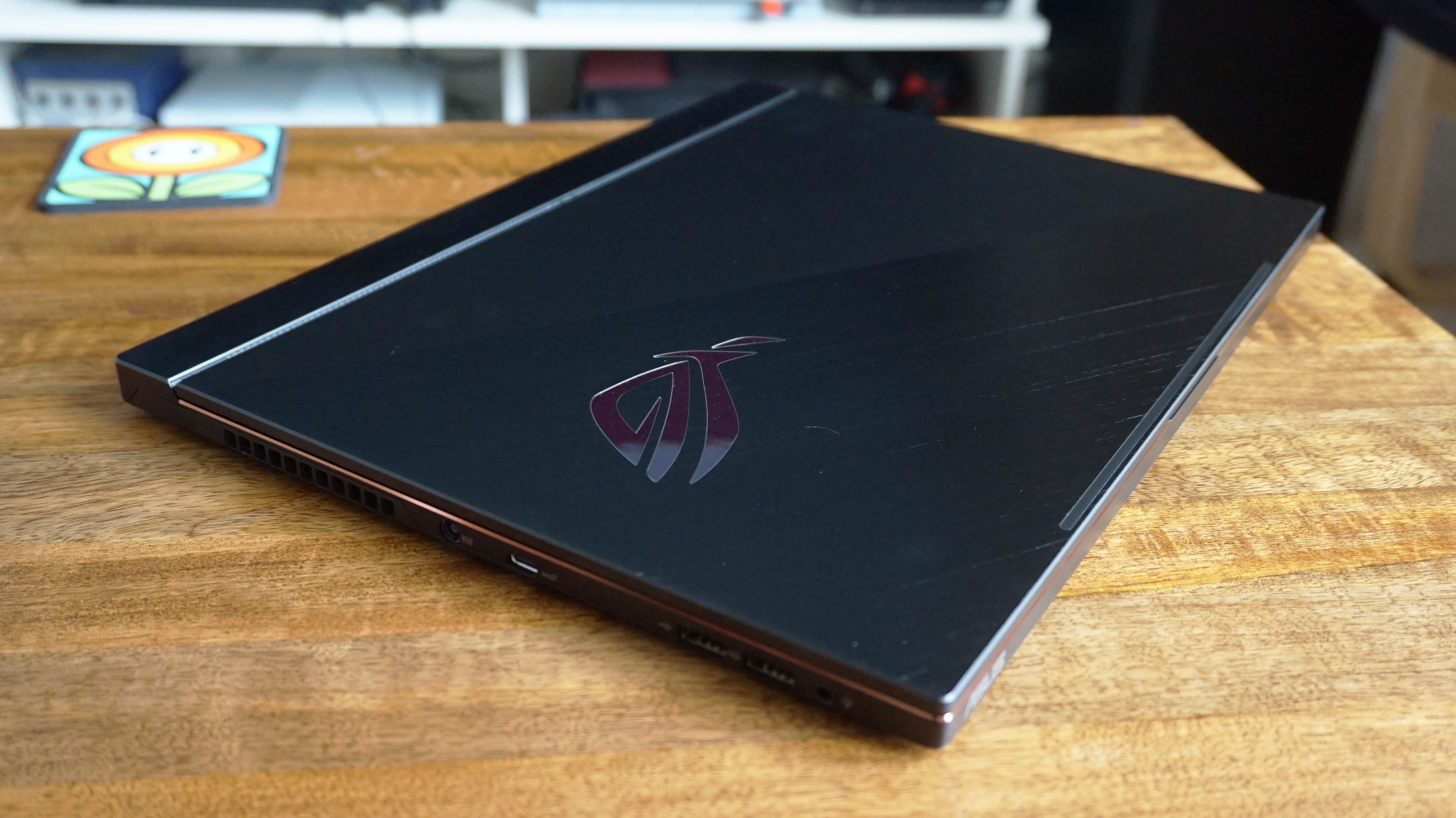 Being an Asus laptop, the keyboard is (yep, you guessed it) fully RGB and Aura Sync compatible, so you can jazz it up however you like and have that same jazzy lighting scheme play out over any other Asus Aura Sync devices you happen to have in your gaming collection. It's pretty pleasant to type on, too, although I'll have to see how its lower position feels over longer periods of time once I can spend a bit more time with it.

One thing I'm particularly looking forward to trying out are the front-facing speakers nestled in the laptop's hinge that have been angled to blast the Zephyrus S' sound straight in your face. Normally, laptop speakers tend to get stuck on the bottom of the chassis and all the sound ends up being pumped into your desk, leaving the rest of it sounding a bit thin and tinny. I mean, laptop speakers are generally thin and tinny anyway and you'll almost certainly be wanting to plug in a headset regardless of whether they're any good or not, but if they prove to be even half-way decent I'll be pretty impressed. 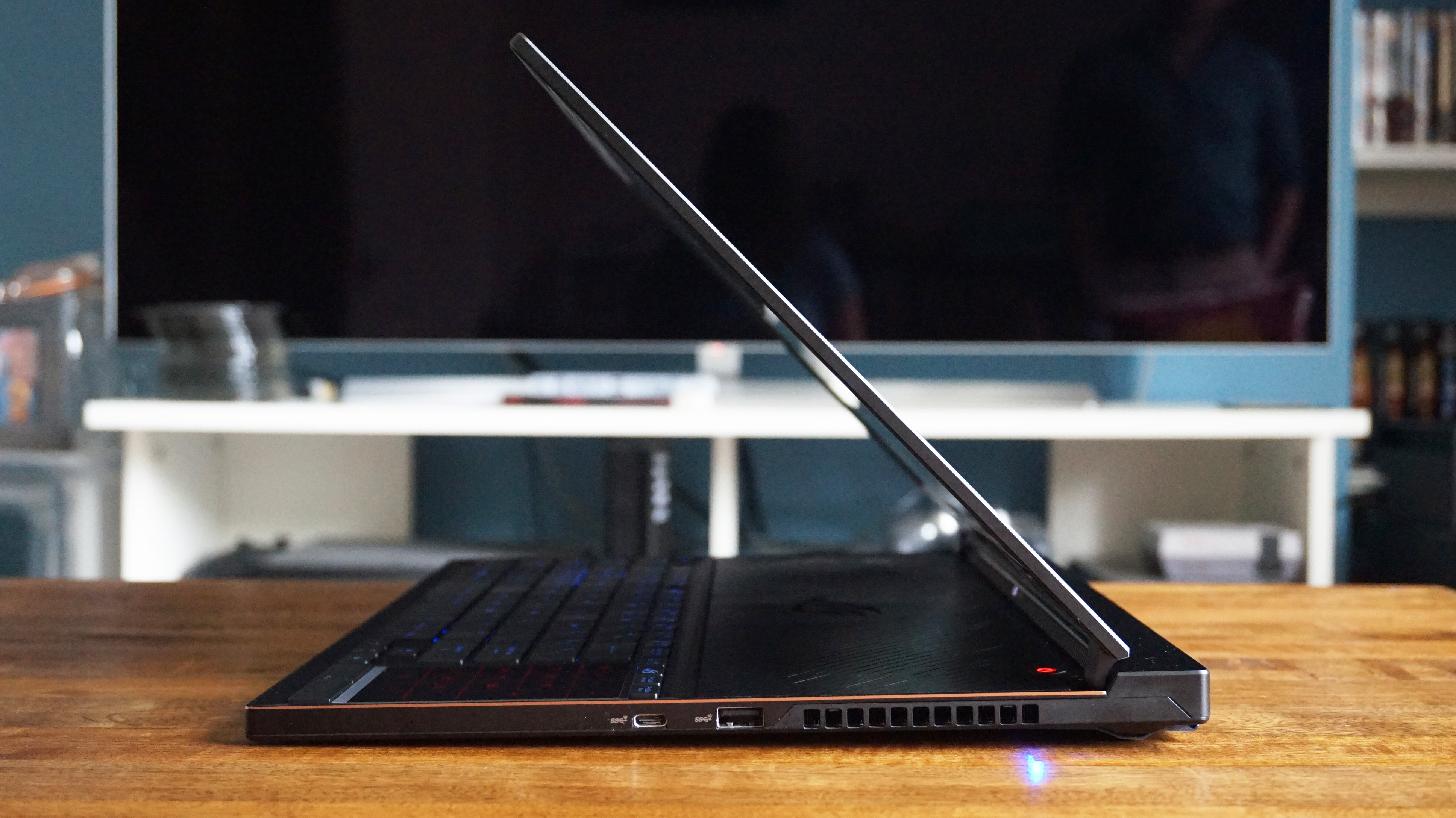 Despite its small dimensions, you still get a decent number of ports on the Zephyrus S as well, including two full-sized HDMI 2.0 outputs. That will be handy if you're planning on using it with a VR headset, for instance, but even if you're only going to connect it to an external display, at least the rear-facing HDMI port means you can keep your cables nice and tidy in the process. You also get three USB 3.1 Gen 2 ports and two USB 3.1 Gen 2 Type C ports as well, plus a combined headphone and microphone jack.

All in all, the Asus ROG Zephyrus S looks as though it could be a very tempting package indeed. A lot will rest on how it performs once I get it in for some proper testing, of course, but as someone whose ailing Dell XPS 13 seems to have boiled during the summer heat wave and now seems to be on its last legs, something like the Zephyrus S could well be the way forward. On the whole, it looks pretty smart and sensible, its design isn't particularly shouty about its gaming laptop credentials (glowing blue rear vent aside), and it's thin and light enough that it probably wouldn't be too much of a massive pain in the back (side) for carting round technology conferences all day.

Of course, there is that slight problem that the best versions of the Zephyrus S won't actually be the ones arriving in October, so even if it ends up being the greatest laptop of all time when I come to review it, I probably wouldn't advise buying one right away anyway, which is sort of a shame. At the moment, all Asus have told me is that the new ones will be arriving early next year, so who knows how long they'll take to actually get here. Still, if you're willing to play the long game on this one, the Zephyrus S is definitely one to watch.