Gosh, Battlerite Royale is morish. In many ways that's not surprising. I've been a longtime (if intermittent) fan of Battlerite's brawling, and while half the games industry seems determined to wear away my patience for them: battle royale structures work for me. They thrust me into situations that other modes don't.

Does Battlerite's top-down MOBA-esque combat still work when transplanted from the fast-paced 3v3 matches it was built around? I rather think it does.

It's in its early early access days, so consider much of this in flux. The broad strokes: 30 players drop from one of two wolfy wyverns onto a battleground littered with spells and disposable gadgets. They battlefight until only one remains, or possibly two if they're in duo mode. I'll pause here so you can appreciate the wolf. 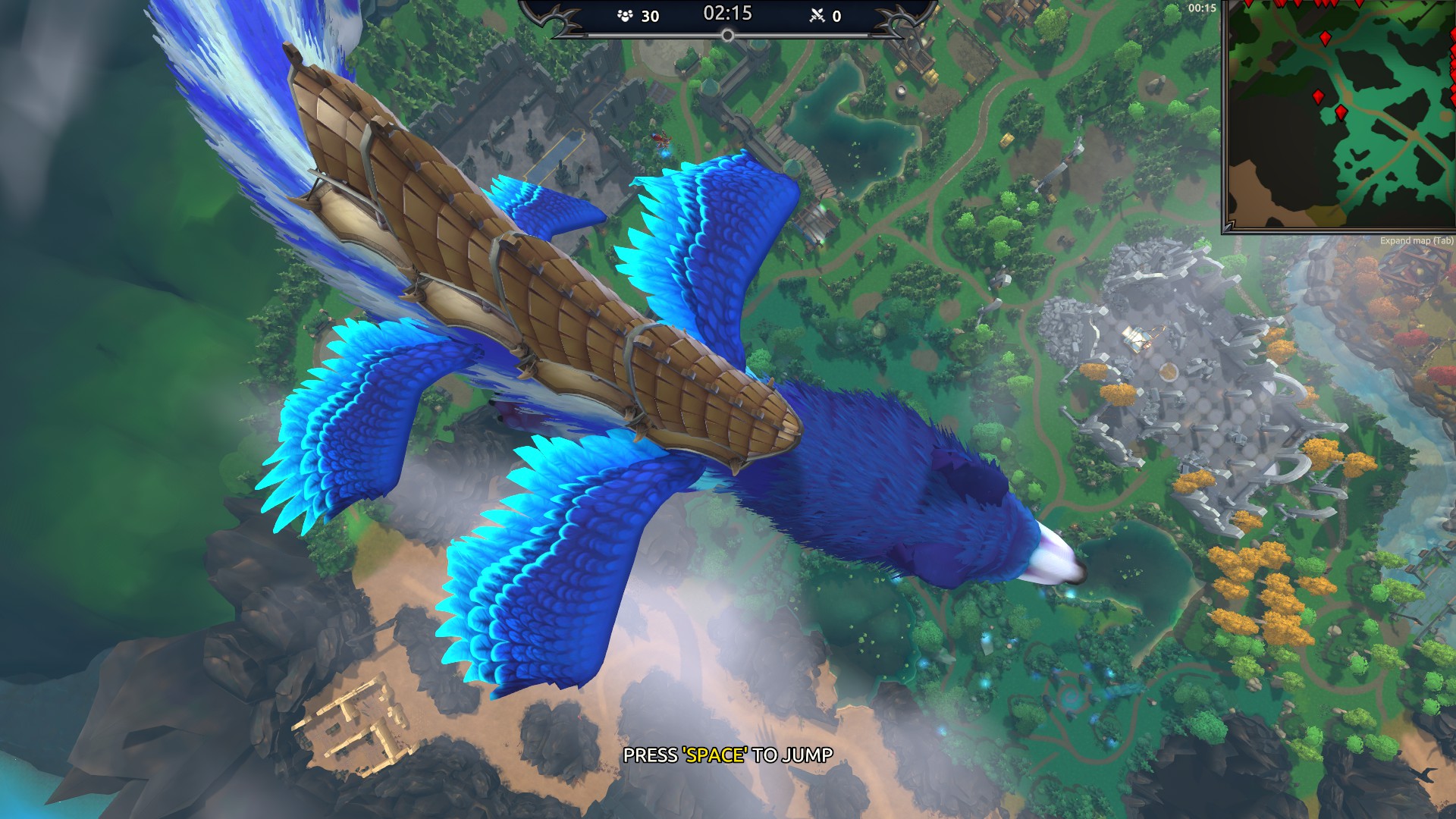 I think it's the best form of aerial transport I've fallen from, and puts Battlerite Royale off to a flying start.

Anyway. Each combatant is tooled up a little differently to their Battlerite forebearers. Characters with defensive and healing spells have had those either toned down or swapped out for abilities with a bit more bite to them, and the double-button complications of special 'EX' abilities have been stripped out. Now every character has six normal abilities, and doing damage with them charges an extra-powerful ultimate ability.

You only start with a couple, though. That leads to early-game clashes where your attention gets split between your opponent, and cracking orbs in the hopes of snagging another ability to help swing the fight. They come in those green/blue/purple/orange rarity tiers that video games have decided denote different power levels, with a bonus reserved for orange 'legendary' abilities. That bonus might be a cheeky secondary stun, or a boost to a spell's range. They're not majorly game-changing, which I'd worry would feel unfair, but you still get to feel a little special when you find one. 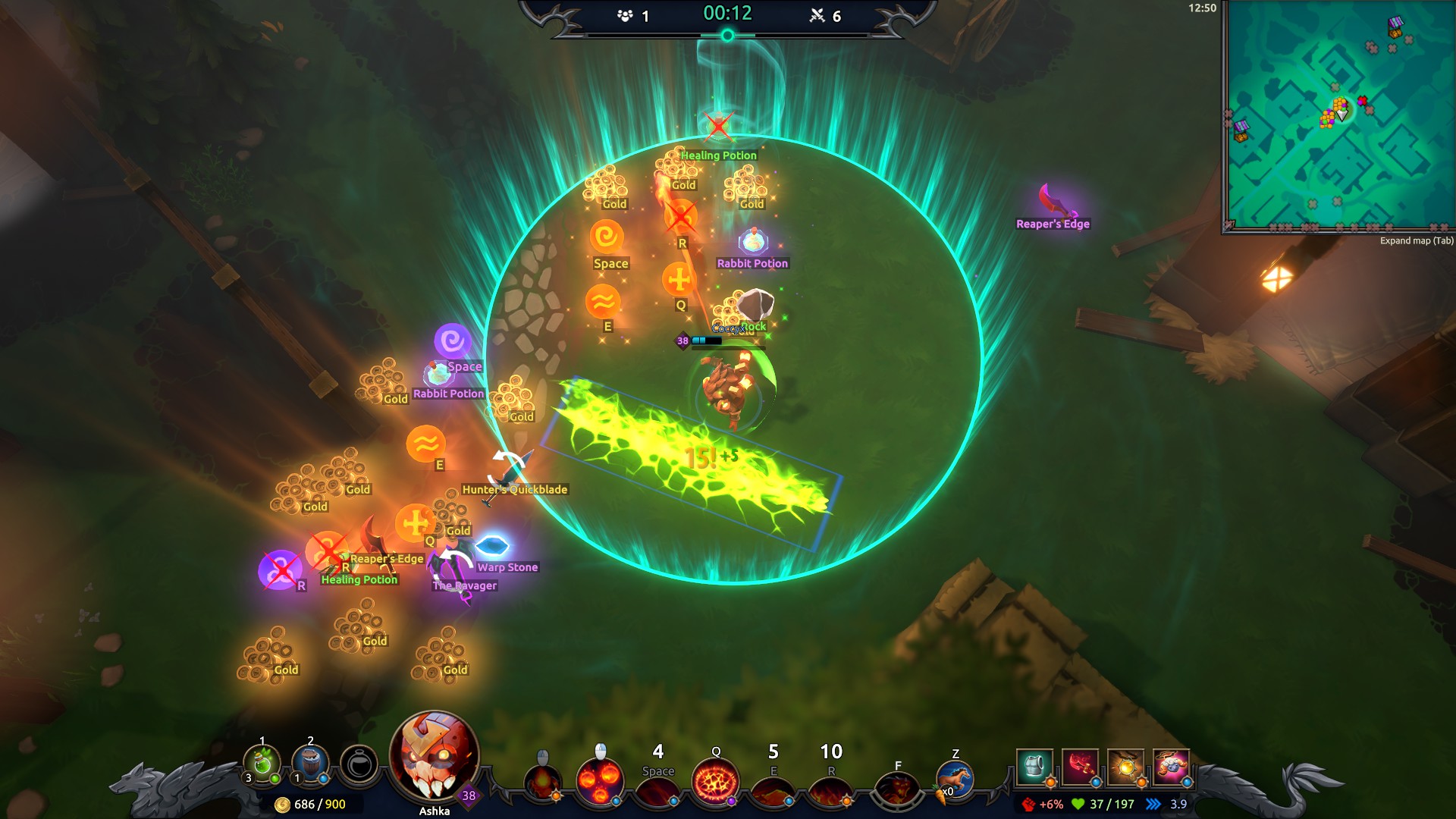 Everything I find compelling about Battlerite's combat is here. Each ability needs to be aimed, dodged, and possibly psychologised about. Champions always have at least one way of dodging what you can throw at them, so much of the dance is about exploiting those vulnerable seconds where your opponent's mobility is on a cooldown. In an ideal world, you'll be figuring out how their bag of tricks interacts with your own, baiting out abilities that counter yours while making sure your hardest hits land.

In the real world, you'll probably only have a vague idea of what your foes can do and wind up fighting them in much the same way each time. I've played dozens of hours of Battlerite and I still don't have a handle on the 20 characters in Royale's current roster, so I shudder to think how a newbie would fare. There's less downtime than in Playerunknown's Battlegrounds or Fortnite, but you'll still spend far more time meandering around than actually learning from fights.

That's certainly a barrier to those that aren't already battle-hardened, but not an insurmountable one. You'll at least get a chance to defend yourself before you're knocked out of the running, thanks to the information-levelling top-down perspective. It's strange to not worry about being snuck up on in a battle royale game. That's a huge part of why I find Plunkbat much more tense, but also why this feels so much fairer. 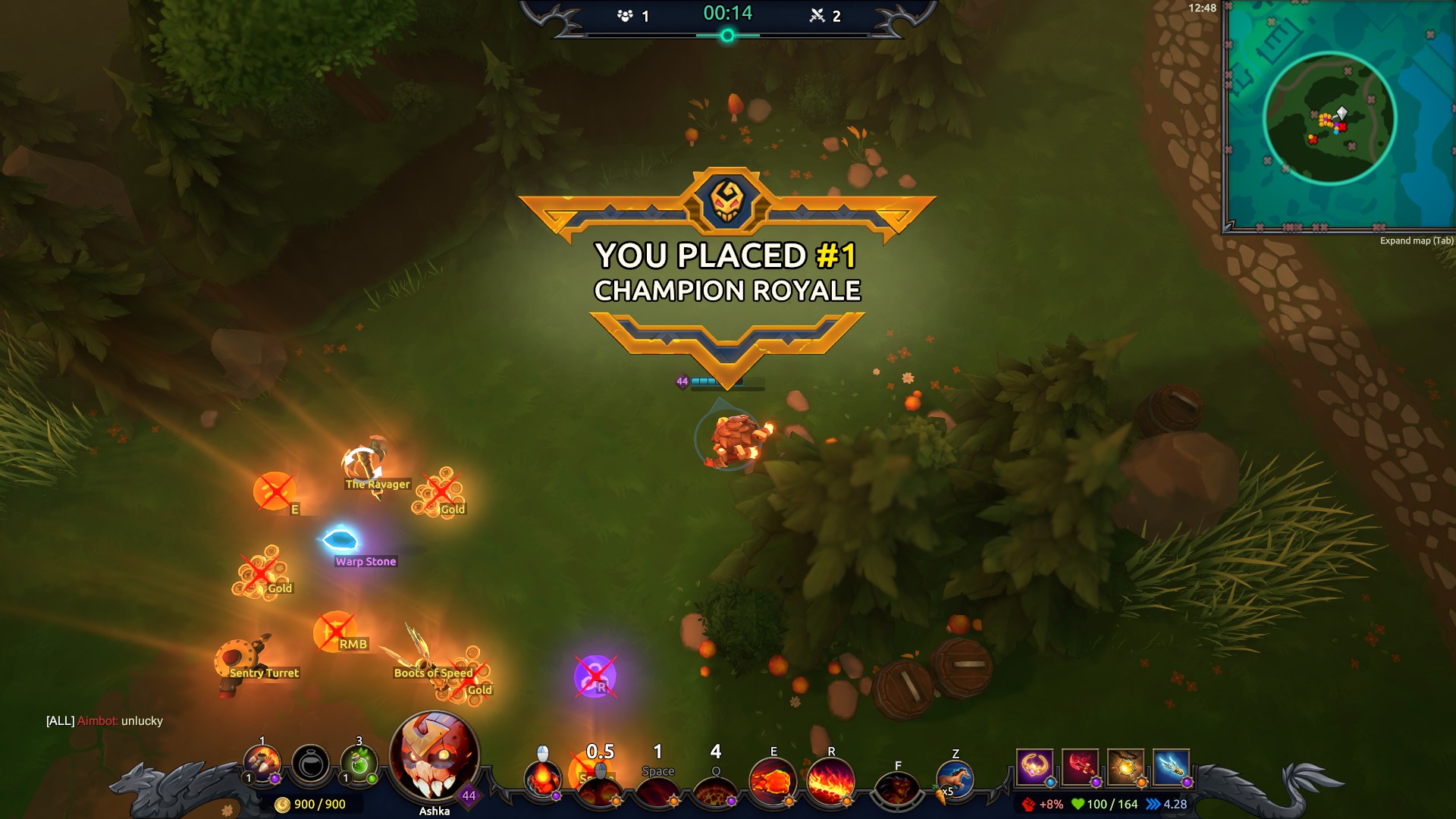 When I die in Battlerite Royale, I usually know how I could have avoided it. There's a number hovering by each opponent's health bar that tells you how many doodads they've collected, which gives you a good idea of when to run away. I run away quite a bit.

Which works, most of the time! Many mobility spells let you zip over walls, making it fairly easy to give people the slip and chug a health potion. The deafening glugging sound then makes it easy for your pursuer to find you - but hey, maybe that's part of your plan. Maybe you've lured them into exactly the right spot, poised to turn the tables with a hard-hitting fireball. That might be my favourite trick. 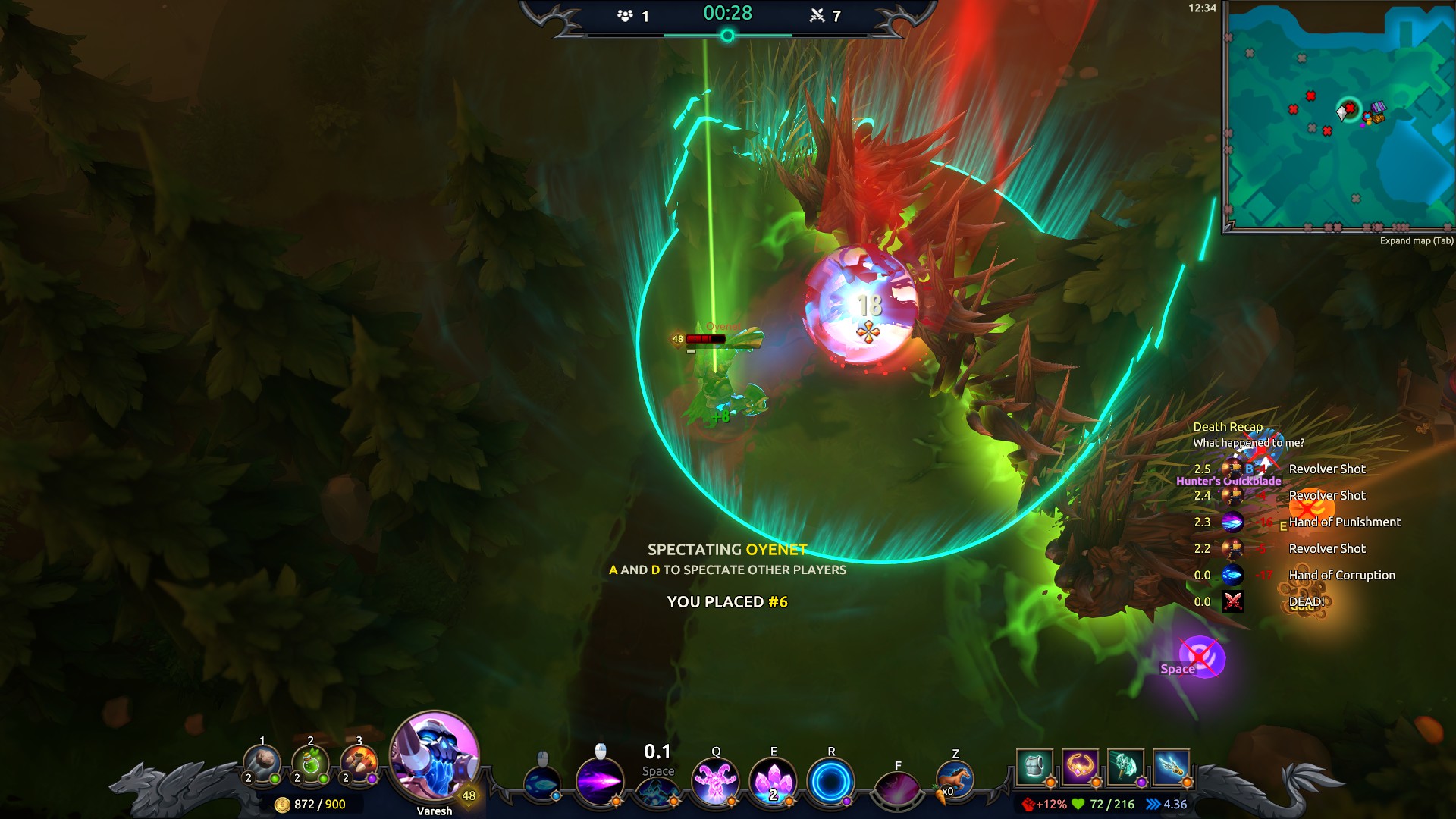 No wait, my favourite trick involves jump pads. They're dotted around the map, some at set locations and some random, and strolling up to one will rocket you into the air. That gives you a brief birds eye view of the area, and lets you attack unsuspecting wizards from the skies. They're great moments to catch your breath and get the lay of the land, even if you don't manage to catch anyone out.

I've gotten quite adept at staying alive until the end of the round, largely because I'm fond of hiding. The game makes it easy: patches of grass conceal you from anyone who's not also tucked away in the shrubbery, League of Legends style. I like to find a nice patch of grass near the centre of the circle and just lurk there, ambushing anyone who dares to join me. Eventually I'll be turfed out by the encroaching death zone, and into a match's closing brawl.

Those final moments are fascinating. It's not like Plunkbat, where death usually comes swiftly from a direction you weren't expecting. In Royale's finales, everyone knows where everyone else is. You want to lurk at the edges, not presenting yourself as too tempting a target but seizing opportunities to damage people you'll need to tackle eventually. In one memorable showdown, a full five of us each tried to claw on to our spots within the circle, poking and prodding at each other like skittish vultures. 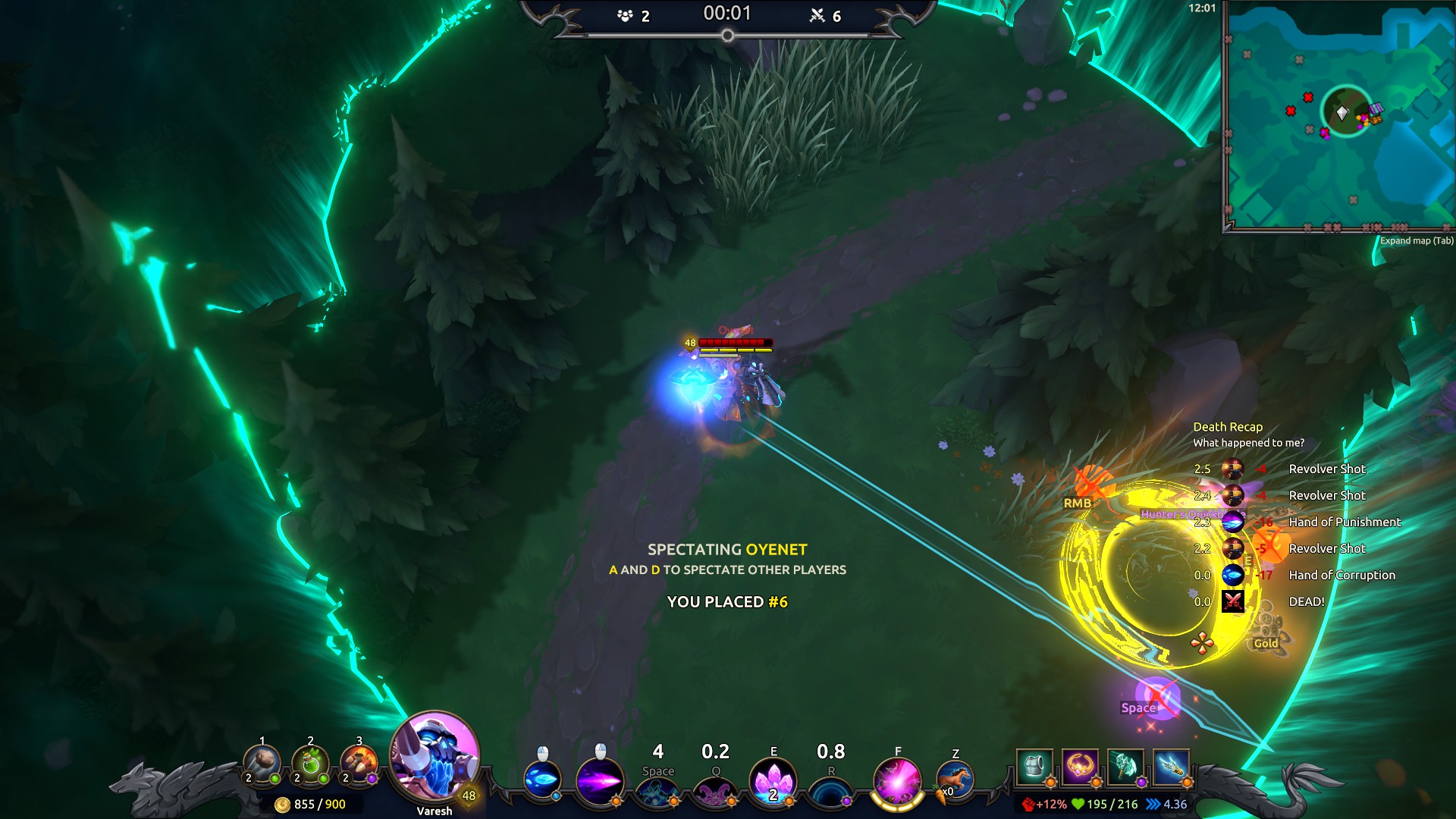 I like it. Will I still be playing next week? That's harder to say. I'll certainly be checking in whenever Stunlock Studios whack in something new: they've given themselves the scope to add any daft toy that occurs to them.

It's not the best place to start off, mind - even though the abilities are different, I'd still recommend booting up some regular old Battlerite before jumping into the deep end here. If you already like Battlerite though, and know you like battle royales... then... yep. You'll probably like Battlerite Royale.

Battlerite Royale is available on Steam Early Access for £18/€20/$20, though if you already own Battlerite then you should have a 50% off coupon lurking in your Steam inventory. You could also just wait for the full free-to-play launch, which the devs are hoping will be in about six months.