Studies say that this week is the best week of the year to move house for gillionth time, attempt the thirteenth Herculean task of speaking to the one human in a Royal Mail call centre, then injure your back. Anti-frustration, then, would be a perfect theme for this week's Unknown Pleasures.

Space! What could possibly go wrong there? Cosmonaut is, I suppose, a survival horror platformer, but not really. You are a space salvage worker whose name is distractingly similar to Jabroni, and your current job is to poke around inside the long lost ship Diogenes and see what can be recovered. This means what it always does on abandoned spaceships: clomping about the place looking for the next thing that needs fixing.

It's livened up by the way you get around, which is like a 2D version of Dead Space - a quick tap of the spacebar launches you directly upwards, and automatically rotates you round to reorient yourself upright on the 'ceiling'. It's a simple thing but brings the setting to life, and is mildly fun to do. It's also a useful tool for avoiding and tricking the nasties that your arrival draws out. Of course something terrible happened on board, and you have to figure out what by reading diaries and logs, and questioning the half-helpful, half-suspicious ship AI. While this is obvious to us, the characters can't really know until they're on board, and this is where Cosmonaut excels.

It's not exactly a terrifying game, but it's moody and atmospheric, and the pacing is just right. The player character is suitably clumsy, clomping and wheezing in his heavy suit not unlike an old whinger with a bad back. Despite the colourful palette, the claustrophobically close camera, along with the sinister mist, ice, and lighting effects add to his sense of vulnerability. But his bag of tricks leaves him on the right side of helpless, and keeps things moving enough to feel like you're an active participant.

I used to opine that any shooting game with a bad shotgun was a bad shooting game. It may be time to revise that opinion, and instead apply it to all genres.

You have a shotgun, and you wander about a bright and cheerful land blasting assorted monsters with it. Crabs at the beach, slimes in the forest, burrowing thingies in the plains, and so on. Dotted about the landscape are dungeons filled with monsters, special items, and pieces of your precious truck. As in the 2D Zelda titles, you can roam freely but some paths will be blocked until you've retrieved key items from the earlier dungeons. Everything about Shotgun Legend is simple and intuitive, to such an extent that just about anyone ought to figure it out as they go, and to enjoy doing so as well. If I have one complaint it's that the shotgun's sound effect needs a little more punch and more variation. 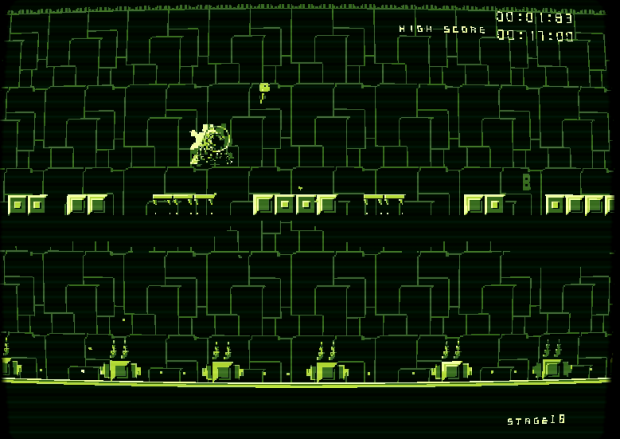 Can I shoehorn this into Minimalist Puzzle Game of the Week? Hmm. Probably not. This is the sort of game I watch a video for and run away screaming, because it's fast and frantic and demanding and generally terrifying to my blurry old back and crooked eyes. However! Heads Run is excellent. You guide a tiny wee green blob-creature through a series of 2D levels, using a few simple jumps, dashes, and wall clings to climb obstacles and avoid hazards.

It's pitch perfect. Controls are simple and do exactly what you expect, the difficulty curve is just right, and everything moves and sounds and looks far more gorgeous than a simple splash of black and green should. It's certainly a tricky game, but it's impeccably fair, and wastes none of your time. Fail, and it's always your fault, and you restart almost before you know it. There's a hint of trial and error if you're slow and prone to target fixation like me, but I never once felt frustrated, which is practically unheard of.

ERROR: Human Not Found
Free/Free, y'all

Well, in fact your job is to keep out of the way while a less potentially biased or implicated investigation takes care of things, but you're quickly approached by another AI in her new robot body, who asks for your help. What follows isn't particularly dramatic, but it's sweet and thoughtful, and tentatively explores a theme where games could do much more. Main characters Grace and Ada have a convincing rapport, and while the art is a bit ropey, the setting is well established, and the decisions are more frequent than is typical. There are also mandatory puzzles based on computer science. If that sounds intimidating, don't worry about it: I bluffed my way through them, and you can too.

Space! Robot! Exclaim! It's an adventure game, all points and clicks and puzzles. Odysseus is an engineer stationed alone on a ship that, while not exactly a mess, needs a lot of minor repairs. Keeping him sane is his robot friend Barton, who if anything is the straight man of the duo for a change. The dialogue is well translated from the Russian, carrying a consistent tone of gentle humour rather than many overt jokes, and with voices confined to a pleasant Simlish. Controls and inventory system are simple and clear, and the puzzles are somewhere in the middle of the road.

A little lateral thinking is required, which is fair enough, but none of the solutions require the kind of backwards moon logic that puts me off most old adventure games. Odysseus plays up his procrastination and eccentricities as causes of lots of neglected tasks and misplaced tools, so retrieving items from awkward places is something of a running gag. Think Bernard Black's toast on the ceiling. The music and graphics are calming, and optional hints are available. Again, we have some devs who obviously put effort into preventing frustration. This is definitely a positive trend.

Pick of the week is Heads Run. 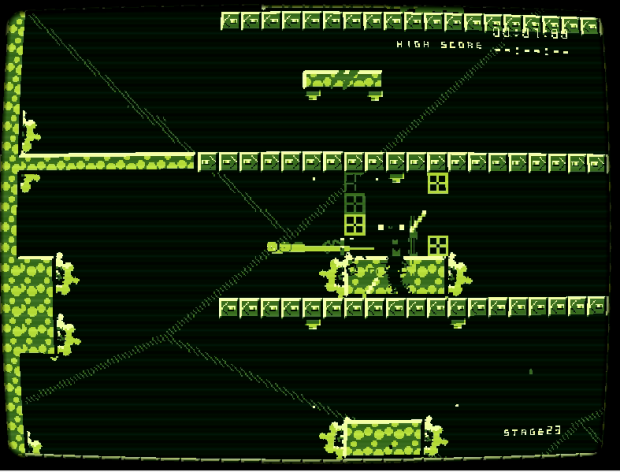 If you're not bothered about getting top speed ratings, Heads Run will be the shortest game of this batch, but it's damned good. It's rare for a platformer to be so challenging without also being highly aggravating, and as a bonus, Heads Run boasts some of the most interesting visuals I've seen for ages. Stills really don't do it justice, you have to see it moving. Especially the monsters: some of them are indescribably creepy.