If you click on a link and make a purchase we may receive a small commission. Read our editorial policy.
Every other Monday, we give you a reason to dust off one of your old games and dive into its mods with Modder Superior. Dominic has hung up his modding tools, so Craig is going to be writing the series from now on. Please give him a warm welcome!

RimWorld is a calamity simulator, where things can go so wrong so quickly that you’re left with everything on fire and Donald Glover looking confused in the middle of it all. You’re in charge of growing a small colony of newly landed pawns on a hostile planet, and everything from the elements to squirrels can take you down.

It’s great, but that’s not the only way to play. I’ve been looking around for mods that will give you a bit more control in all the chaos. That’s not to say things will be easier, as there are a number of mods that could result in more trying circumstances, but you’ll be playing RimwWrld with just a touch more information about what’s happening, and with some of the busywork dealt with. After a few hundred hours (you can’t play RimWorld for less than that), you deserve to have some help.

How to install RimWorld Mods

Steam is all you need for to grab these mods. I’ll link to the Steam Workshop page for you to click on and download. There is one thing you need to get elsewhere, though. Grab Mod Sorter and run it after all the mods have been installed. It should organise all your mods, enabling them to work together without any conflicts. You can install it anywhere, so giving it a folder on the desktop worked for me.

You’ll also need mods to run other mods. The wonderfully named Hugs Lib is one. It’s a shared library that acts as a foundation for other addons. As such, you just need to have it installed, alongside Harmony, and leave it at that. These are the glue that binds a lot of the work we’re going to be doing.

Finally, there’s Fluffy’s Mod Manager. Though RimWorld has a mod menu built-in, it could be better. Fluffy’s app will help you keep track of everything you have added, as well as enabling drag and drop activation, the creation of lists so you can save and apply multiple mods in the correct order, colour coordination, and more.

We've put together our picks for the best RimWorld mods to make your life easier and give you more control over the game, but there are no doubt more great mods than we've included here. This list will be updated every so often, so make sure to let us know what your favourites are in the comments below and maybe they'll be included here in future. 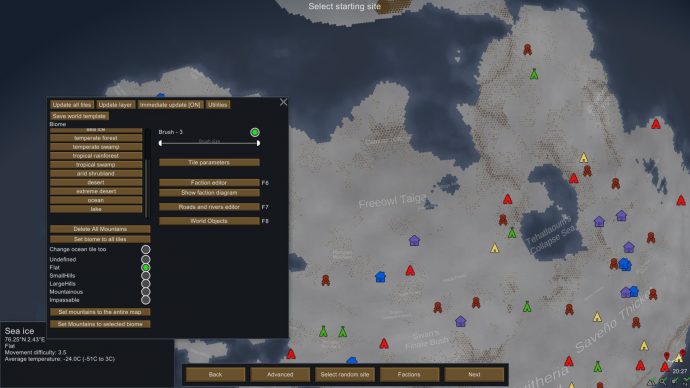 Though you get the opportunity to select your landing site in RimWorld, you have to hunt around on the world map to find your preferred arrival area. But there is another way. World Edit might be too much for some, as it unlocks all the different environmental states for you to precisely alter, but you don’t need to use it to cheat. It could be used to make your landing tile more comfortable, sure, but it could equally be used to craft the most challenging or ridiculous settlement.

You can make tile-sized changes, all the way up to applying settings to the whole world. And everything is up for grabs. Basic tweaks mean you can simply change the biome and leave it at that. You could squeeze in a single temperate forest tile amidst the dead and threatening sea ice, just to see how it goes for your colonists. It scales, too. You can make a brush that will apply changes across a number of tiles, or you could apply it across the entire map.

More interesting tweaks will change what factions and settlements will spawn and where, where rivers and roads are drawn out (and what type they are selected), temperatures, elevations, and more. It’s limitless, and remarkably addictive. I might have downloaded it to create an interesting starting tile, but I was sucked into the godlike mapping powers it added. 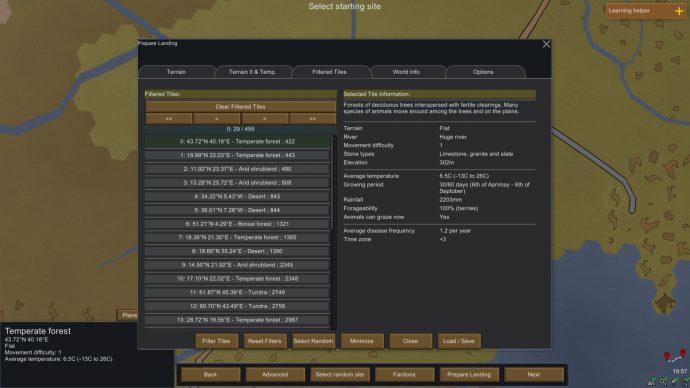 If that’s too OTT for you, you can use Prepare Landing. It does a lot of what World Edit does, enabling you to create a set of filters that will then spawn tiles with those elements on the map and highlight them for you. You can change as little or as much as you want, and use the mod's god mode to alter specific tiles in and around the landing area. It’s worth using over World Edit if that’s all you care about. 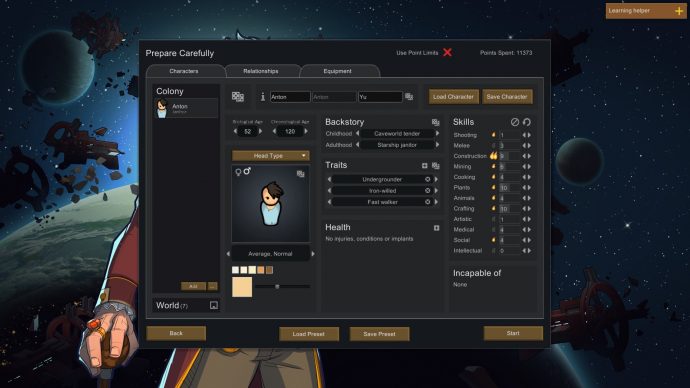 If you’re happy to change the DNA of the world, you might as well go all in and install EdB Prepare Carefully and do the same for your pawns. It lets you select starting stats for your colonists, enabling you to carefully prepare (hey, that’s where the title comes from) for your crash landing.

It’s a powerful tool to turn RimWorld into something with a bit of direction. With it you can easily craft colonists with complimentary skills, traits, and more. Think of it as crafting an away team, where you can send down a properly skilled medic in place of an anti-social intellectual. You can choose to build a character within the game’s predefined limits, or uncouple them from that and create overpowered colonials.

You can also use the mod to save presets of colonists, meaning if you hit on a particularly perfect set of characters, they’ll be around for whenever you need them. 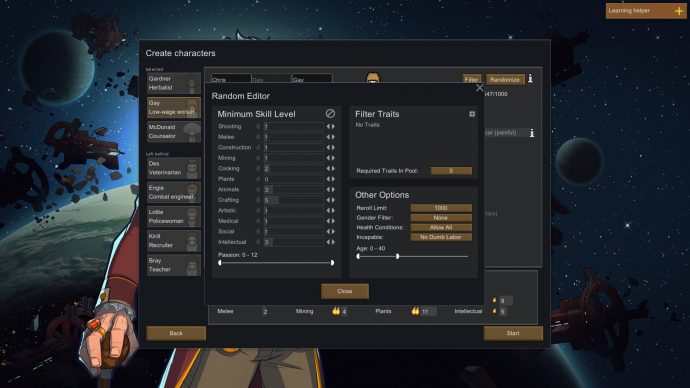 If Prepare Carefully seems a little bit overpowered to you, you could always use RandomPlus. Instead of having granular control over every aspect of your characters, RandomPlus lets you select some minimum specs for pawn generation, meaning you’ll roll characters until you hit those specific elements, but the rest are left to chance. It’s quick and dirty, but keeps within touching distance of the game’s chaotic character creation. 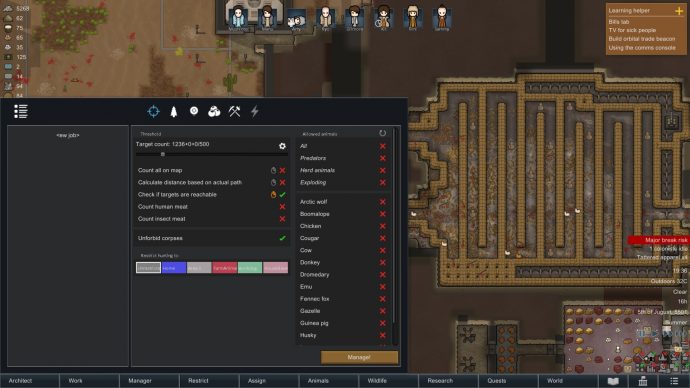 Fluffy’s mods are designed to enhance the vanilla game, and this is something that really helps you keep your colony colonising. The mod enables you to set up-rules that control the colony’s daily requirements, leaving your pawns to fulfill those orders, stripping you of a whole truckload of micromanagement.

A small example: you could set a rule that states a number of meals is required to be ready at all times for your colonists. The managers will take care of that from now on, working to keep the meals you have at hand as close to the number you stated. It works across all jobs and resources, so you could set up a similar rule for animal meat. That will set colonists capable of hunting to start looking for general or specific meats. You can tell them what to hunt, how much to get, where to get it, and what sort of stock level to keep.

It’s a real help at any level of colony, but particularly when you have a couple of dozen pawns where you can craft a rule-set that’ll efficiently build and sustain your growing group. 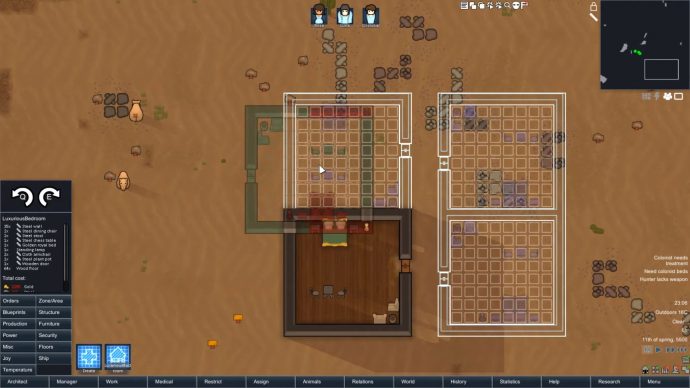 Another Fluffy mod. It enables the player to create prefabs of rooms from a single source, meaning if you have a small but perfectly formed bedroom that you’re proud of, you can save a blueprint that will enable you to create it over and over again.

Obviously, this is the sort of addon that saves you time, but it fits in with the game in a number of ways. If you want to build somewhere that’s blocked off, you can use a blueprint to mark out the space you want to build in so you can see what work needs done. You’re also able to alter the blueprints, meaning you can change around what the walls are made of if you feel the need to.

Best of all, it lets you use blueprints across different games, so if you build something particularly nice or useful in one colony, you can add it to another. It’s great if you have a few standards that you stick to. 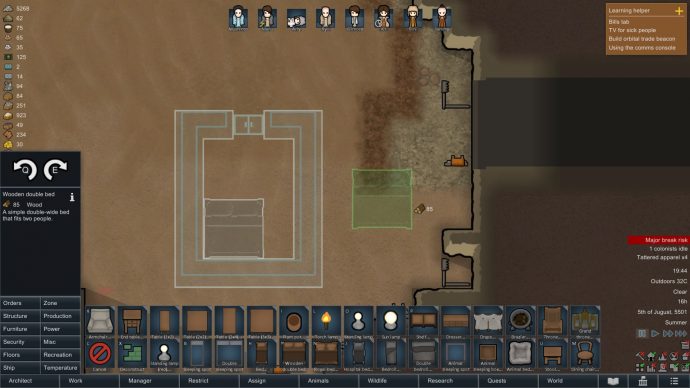 A very simple mod that lowers the overall requirements for rooms, which means you can build more compact bases, using fewer resources. This is something I’d never go without, as cavernous bedrooms on hostile worlds are a waste of space, and I’m a millennial and therefore have gotten used to living in small places. 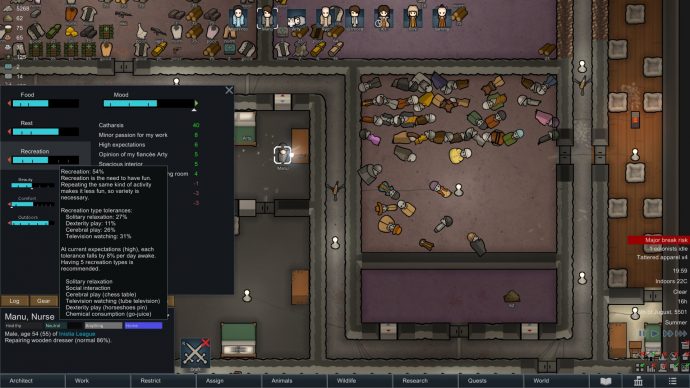 The one thing my mum wishes she could install on her children and my dad. Common Sense introduces lots of rules that fill in little gaps. It’s full of little rules that made the bigger picture much better: you can suggest that your pawns haul items to a stockpile if their current job takes them past it.

It’s almost like a chore mod, where you can make sure all those little jobs get done. Have them clean before going to bed, or collect all the necessary ingredients for a job rather than making multiple trips. It’s a huge help for when your colony grows. 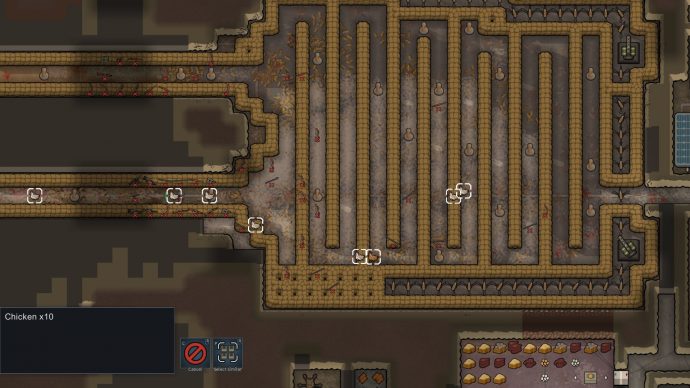 Allow Tool is something like a Photoshop selection tool, but for RimWorld elements. You use it to mine connected ores, harvest ripe plants, select similar elements on the map, and more.

Its functionality is so simple that it becomes second nature to simply click on your base’s mortars and then use the tool to find out where the rest of them are in your base. And from there, you can set an action to carry out, so if you want to quickly rearm all your mortars, Allow Toll will… allow it. Aha! When you go back to the vanilla game, it feels like a beta compared to when this is installed. A true game-changer.

Have we missed some RimWorld mods you can't play the game without? Let us know in the comments below, and we may include your suggestions in a future update to this list. Or if you're looking for more great mods for a different game, hop to the Modder Superior page for more articles like this.