When I was a kid I once woke up so scared that I couldn't open my eyes. My bed faced a window and I knew that if I looked, there'd be something outside the window, scratching at the glass. It felt safer to walk rather than to run, slowly sliding from beneath the blanket and treading through treacly air to the door, eyes still closed. I reached the landing, outside my room, looked around and wanted nothing more than to burst into my parents' room where nothing bad could happen. And then I realised the monster was behind that door as well.

Bonbon [official site], a short horror game that is out today, took me back to that night and others like it.

Here is the trailer for Bonbon:

The important part of that video is the statement: “Bonbon is a short horror story, about your childhood.” Clearly, no story can be about everybody's childhood, no matter how universal some experiences might seem, but this is a pretty good approximation of my own surroundings back in the day. The horrors might be different but the cosy familiarity hits very close to home.

Like Everybody's Gone to the Rapture, Bonbon invokes the everyday sights and sounds of a certain place at a certain time to great effect. As in the Rapture, this is a British period piece and from the first moments when you play in a fenced-in back garden while the sound of cars from the street and a nearby dog provide a sountrack, Bonbon reminded me of places I have been. It's the slight dirtiness of everything, from the faded texture of a carpet to the mud beneath the grass. Bonbon's home, and the voice of mummy shouting from indoors, is authentic.

There's a truth here and as events shift through the five scenes that make up the twenty-to-fifty minute playtime, the more overtly fantastical and frightening elements threaten to snap that thread of authenticity. For me, it all held up, just about, and that left me with a satisfying though somewhat confusing resolution. I'm not going to tell you what happens and your interpretation may differ from mine, but I reckon the strength of the story is in the slight twist it puts onto a very ordinary scenario. If you're already convinced this might be for you, go play it now because even though I'm not going to say too much about what happens, I am going to discuss my interpretation of events.

With horror, particularly domestic horror which is the subgenre Bonbon lurks within, there's a tendency for every bump in the night and shape in the shadows to be meaningful. We're living in a golden age of horror cinema and most of my recent favourites use something spooky or monstrous to dissect life itself. To pick just a few, The Babadook, Under The Shadow and Get Out all use apartments or houses, and domestic arrangements, to needle under the skin of viewers, using phantoms, folklore and make-believe to draw in wider social, political and familial devastation and fear.

Bonbon goes against the grain by keeping the pressure and the tension extremely localised. It's as much about the sensory experience of being in a state of childhood anxiety and learning as it is about anything else. In terms of what you actually do on Bonbon, this is mostly a game about playing with toys. Or putting toys a way, though absolutely not putting away childish things in any grander sense. You're literally picking up balls and rubber rings and wooden blocks, then depositing them in a toybox or lobbing them through the backdoor so they don't get lost in the garden.

And as you do this, you can hold the toys and rotate them. You can talk to them. They all have names, like Wobbly Dog and Mrs Apple, and while the fact that the words are presented on screen suggests you know those names, you'll struggle to say them. Instead of childish half-formed vowel-heavy syllables though, your speech creaks out backed by an electric hum, fractured and accompanied by a dimming of light as if intense focus is required to cough up the word-bits. 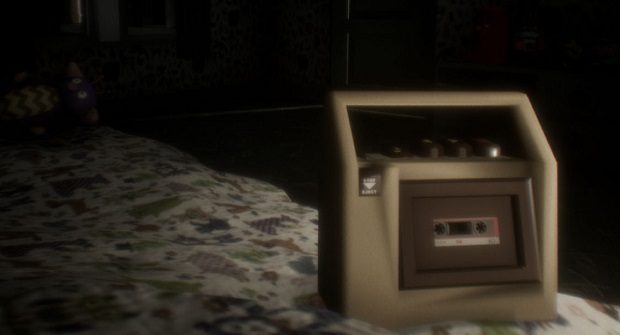 It's the first indication that something might not be quite right. Soon, there are more explicit indications, but however real the threat seems and however it manifests (there are 'imaginary' enemies as well as friends), Bonbon's interest is in the sensory rather than the metaphorical. At least I think it is.

This is a short vision of fear as a jumbling of sensory input. It's about the little things that grow in the cellar of the mind like mushrooms. One spoken word section turned my head a little, making me think I might have missed a clue and misread the situation, but I think even that can be explained as a sort of audio perspective trick.

And all of that goes back to authenticity. The confusion between what is real and what isn't, and what is threatening and what is malign, rings true. As children (especially as children) we see shapes in the shadows, and an innocent remark or the glow of a nightlight can seem like a sinister whisper or a hungry maw in the corner of the room.

Playing is simple. Each scene takes place in a single room, some locking you down to a single position and simply allowing you to interact with whatever's close at hand. You could spend ages messing about with the toys, but chances are this will be a one and done game. Unpicking it all afterwards isn't quite as simple as playing it, but Bonbon is a small thing. A little treat.

It all goes back to those toys. Beautifully recreated, and backed up in their period detail by snippets of television that tickle at my memory, they're always on the verge of an uncanny revelation. Wisely, Bonbon allows them to exist as playthings though. There's no Chucky here, or Freddy Fazbear, but there is a house of horrors that hit far closer to home than most.