Every year I run a communal Combat Mission skirmish in which RPS readers attempt to outwit and outfight CM’s decidedly dangerous AI. Turns span 60 seconds and rarely go according to plan. Late-war and Eastern Front, this year’s scrap takes place in a German-held Baltic port. Turn 12 begins with the commenter-controlled Soviets in control of two of the map's seven VLs. Their gains have come at a price (a T-34/85 & SU-76 destroyed), a price likely to increase shortly if the Red Army recon platoon currently pinned at the end of West Bridge isn't rescued. 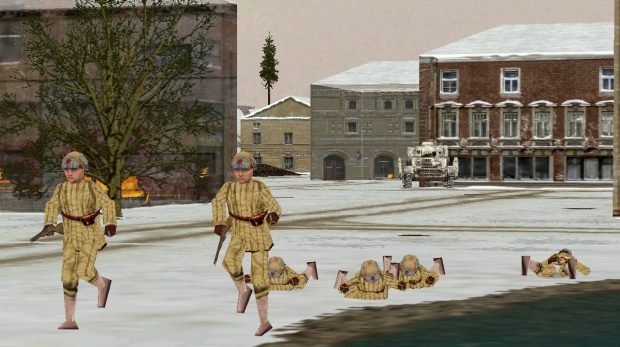 The first ten seconds of turn 12 are calamitous for Ryumin and his men (***SPOILER WARNING*** The following fifty aren't great either). Hosed mercilessly by the Pz IV, one squad breaks and tries to retreat, the other panics. Ryumin's three-man HQ attempts to steady the ship taking two casualties in the process. 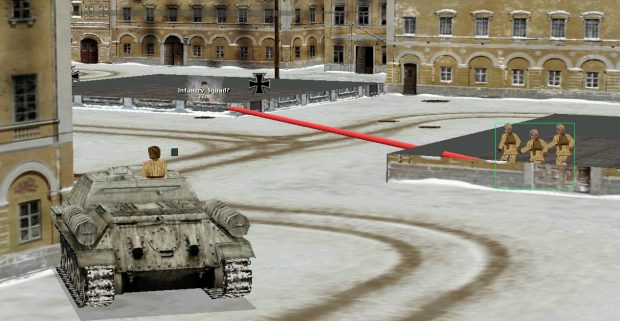 Ryumin's best hope – Ryumin's only hope – the 31-tonne self-propelled howitzer nosing into the square at its eastern end, has only just got underway when a Panzerfaust warhead darts towards it from the Orthodox edifice at p23. The missile misses but persuades Sergeant Fesin, the SU-122 commander, to descend into the cramped, clamorous interior of his wall-grazing heavyweight. 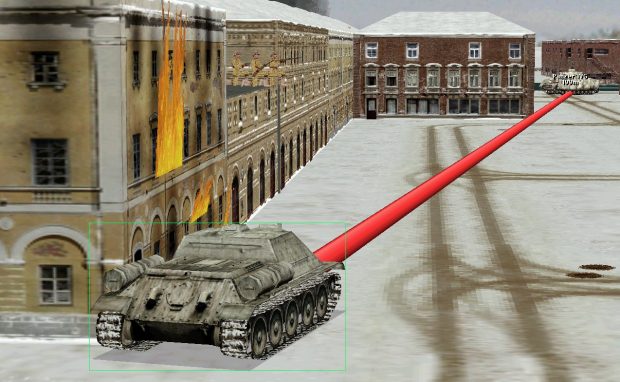 His nerves frayed by the PF near-miss and his view compromised by thick vision blocks, the buttoned Fesin doesn't identify the Pz IV at the far end of the square quite as quickly as perhaps he should. By the time the SU-122's M-30S gun is correctly aligned, the Panzer's muzzle is on a reciprocal heading. 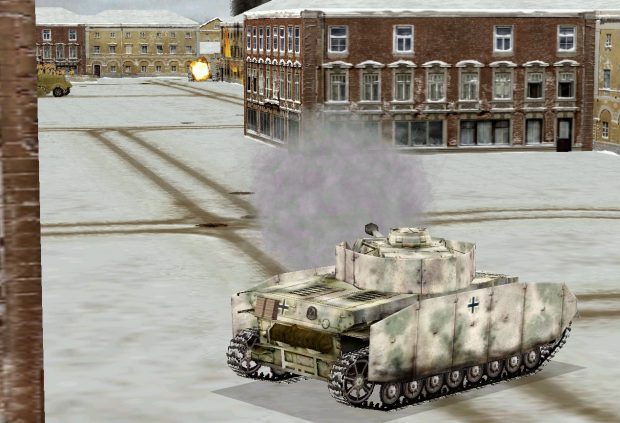 At T + 36 seconds a Pzgr.Patr.39 AP shell is stung into sudden acceleration by a squinting German gunner.

At T + 36 seconds a BP-460A HEAT shell is stung into sudden acceleration by a squinting Soviet gunner.

After almost colliding above an abandoned perambulator in square q20, both projectiles cross another 100m of trampled snow before terminating emphatically. 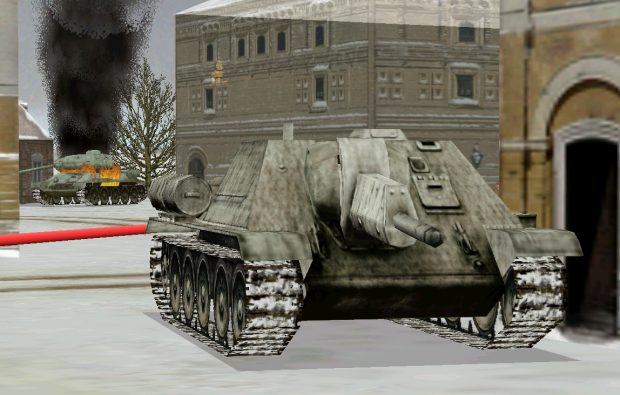 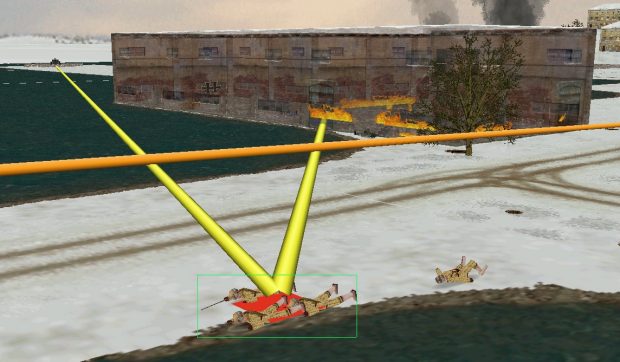 Ryumin's corpse is cooling on West Bridge along with those of eight of his men. One recon squad has made it back to the safety of w16 with five casualties. The other (ten men) is routed, still on the bridge, and under fire from the warehouse and the AA gun on New Wharf. 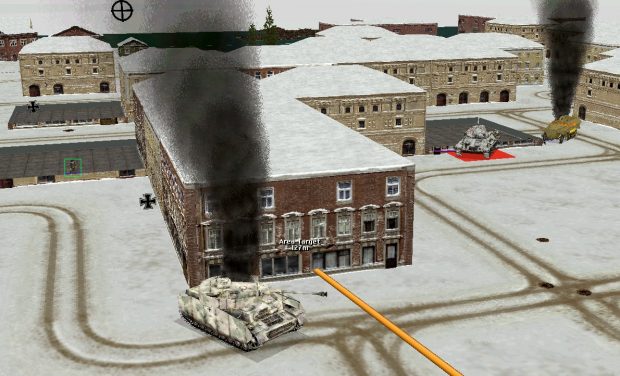 North of West Bridge the building at p15 is about to be pummelled with mortar bombs (Batrakov's adjusted barrage is two seconds away) and Flare Path, the OT-34, has reversed and reoriented.

At the east end of the square, Myshkov and Lapshin's men seem to be doing a fairly good job of containing a growing enemy troop concentration circa p23. 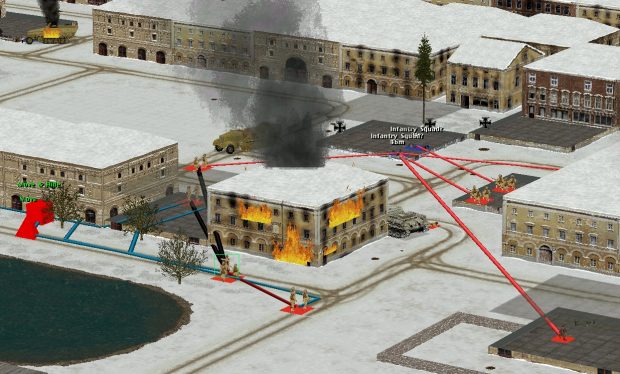 Many of Lapshin's troops are still en route. 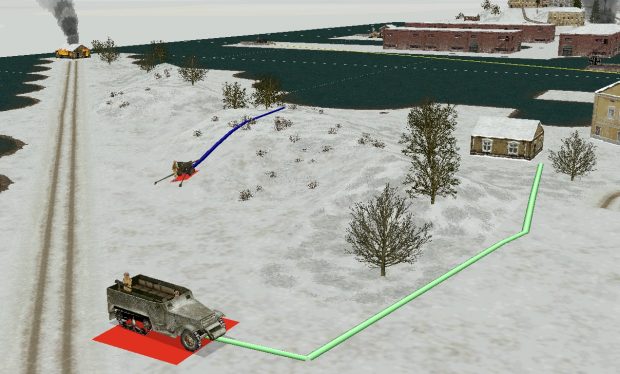 On the spit, the M5 and AT gun are manoeuvring.

The tired tank hunter team has arrived at w16. 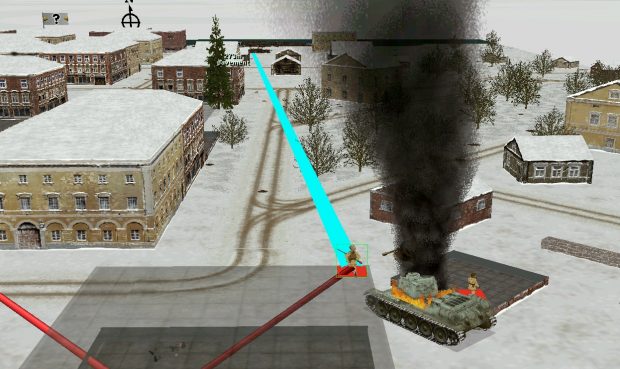 The standoffish StuG is no longer in Renko's LoS! At some point during the turn it seems to have quietly reversed.