When Graham told me that Curious Expedition 2 was a lot like Curious Expedition 1, I immediately told him that was fine. Curious Expedition 1 was great! It's a roguelike about managing parties of adventurers as they explore mysterious islands, making friends with the natives while desecrating their shrines and spreading calamity throughout their lands. (I think it was self-aware enough to get away with this, for the most part.) You wind up with stories about how your party nearly starved to death, but just about managed to tide themselves over by feasting on their donkey. I was psyched to see my people starve once more.

Playing the latest early access build has left me thoroughly de-psyched, because the new events are thin and far between and the combat I liked has been dumbed down. It's a curious step back.

Each game is still structured around three expeditions, though this time those are tied into a plot thread that persists between runs. I found myself competing against a rival explorer, with the both of us racing to discover an Ancient Stone Slab. I did this by picking my way across several islands (smaller, this time round), taking care to select routes that didn't over exert my party. Every tile you travel drains your sanity meter (which, as in the first game, could easily have been labelled "morale" instead), so you need to ration out momentum-preserving items like chocolate and whisky. There are items that let you navigate different terrain more easily, and events where you hunt wild animals, chat to natives, rest up at waterfalls, and poke around mysterious inland shipwrecks. 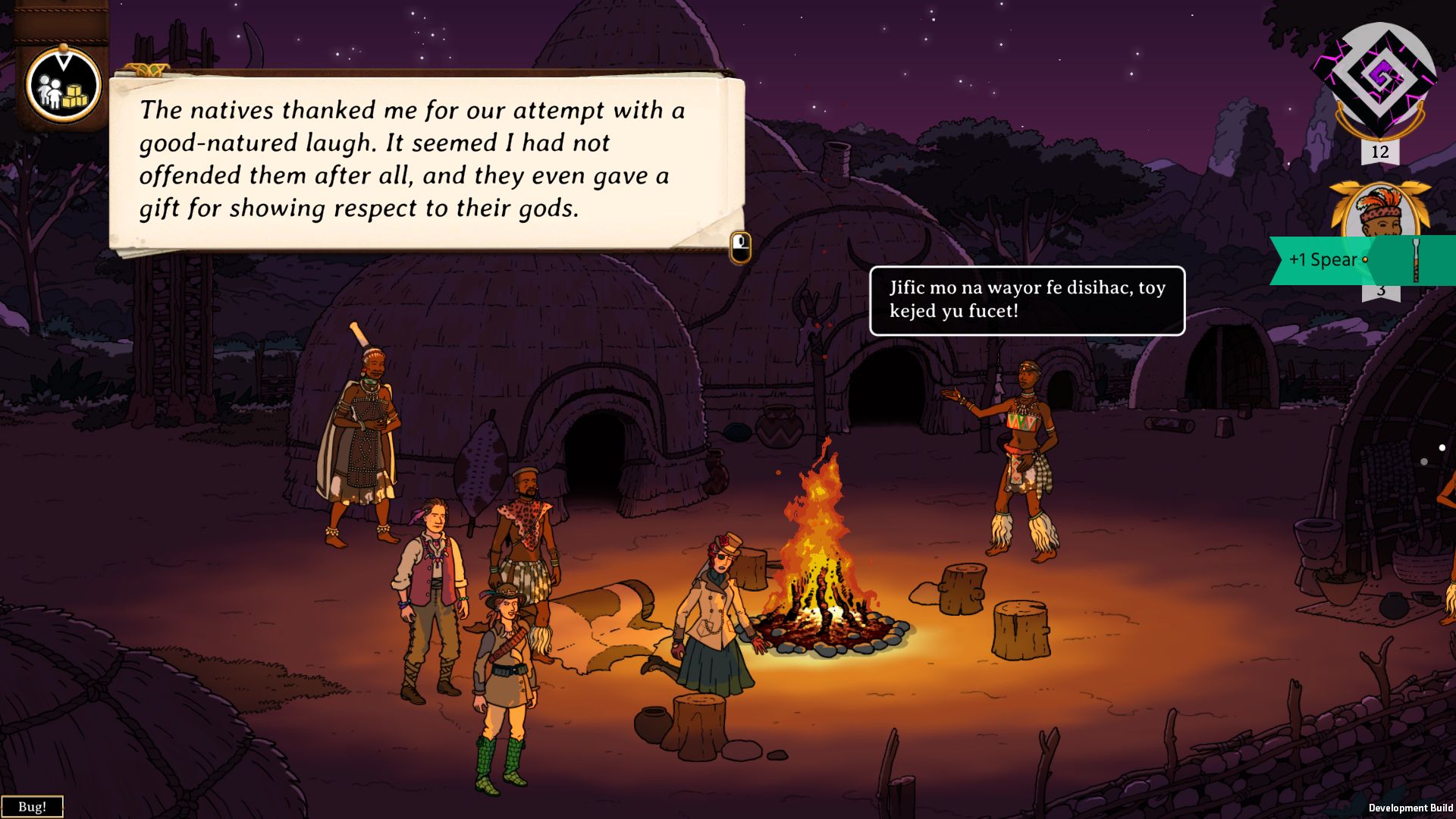 Problem is, those shipwrecks stop being mysterious the moment you find your third one. For this to work, you need to see these events as events, not just mechanical opportunities to gain loot. That's supposed to be a major selling point, but this time round I'm not buying. Not only did the the same events pop up again and again, my central objectives repeated, too. I went after the same Slab twice, and to do that I twice had to prove my worth to the locals. It's hard to suspend your disbelief when you're asked to kill two identical hyenas for two identical tribesmen.

I get that the events might be a bit sparse in this early stage of early access, but I'm baffled as to why the combat's been stripped down. The first game used a neat dice system, where you had to combine different coloured dice to do special moves. Each attack came with an interesting calculation: do you risk re-rolling for that hard-hitting multi-targeting rifle shot, or do you settle for a mediocre punch? But now those combos have been done away with, and every attack is done with a single die. You might attack first with a character that makes an enemy more vulnerable, but you don't need to think about much beyond that. They've streamlined something that didn't need streamlining, and turned combat into a chore. 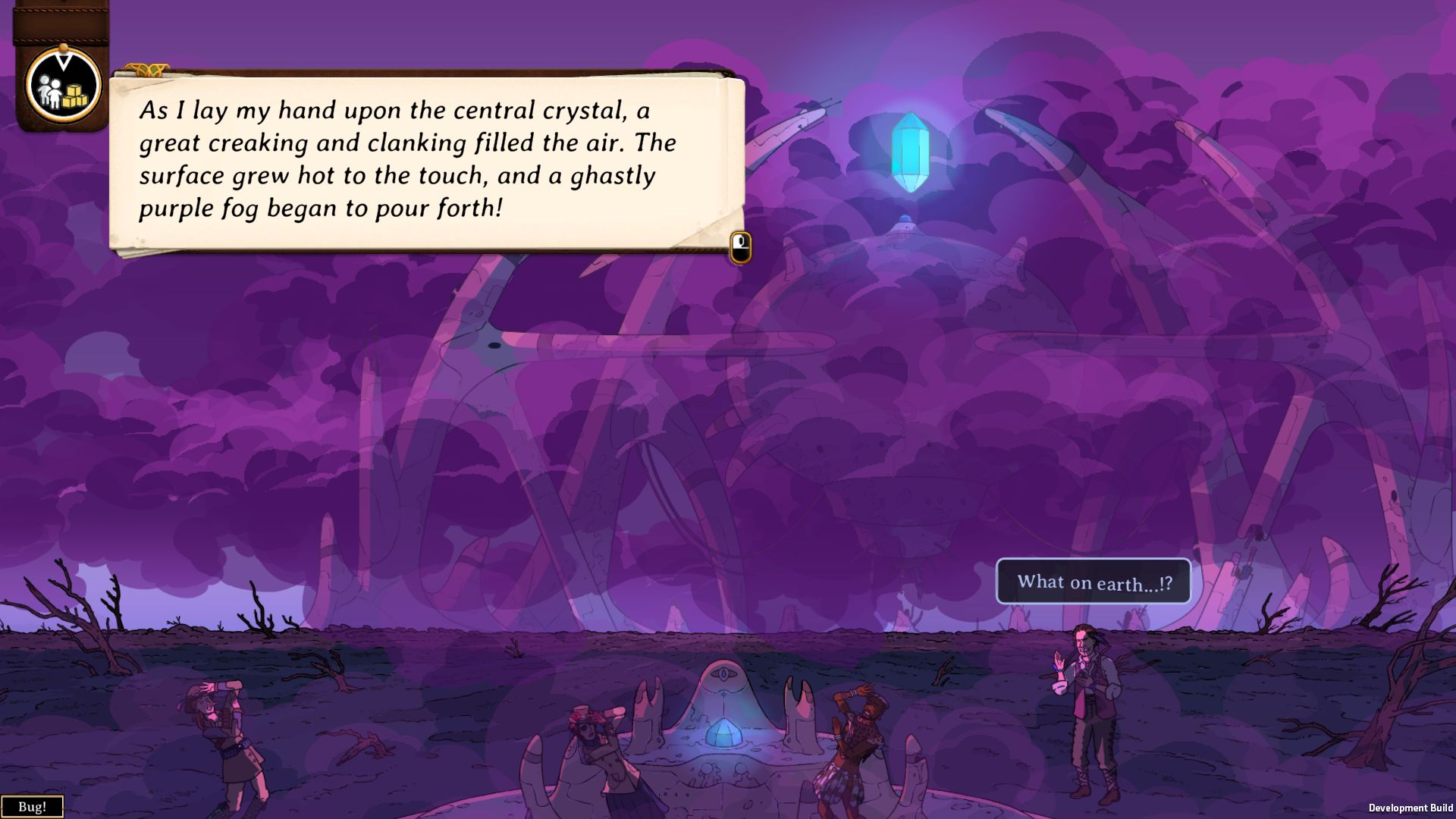 I wouldn't even say it's prettier. The old pixel art has been replaced with a cartoonier look, and that does come with some advantages. I like how you can give weapons to your party and actually see them wielding them, and more detailed animations mean you get to see your party do stuff like run in terror from a collapsing temple. But even so, the old style did more for me.

On top of all this come bugs. I had several events just fail to trigger for me - I'd press the button that was supposed to let me talk to a wandering party of natives, and they would promptly disappear. The combat animations are a bit broken, too, which isn't a huge deal, but still jars. 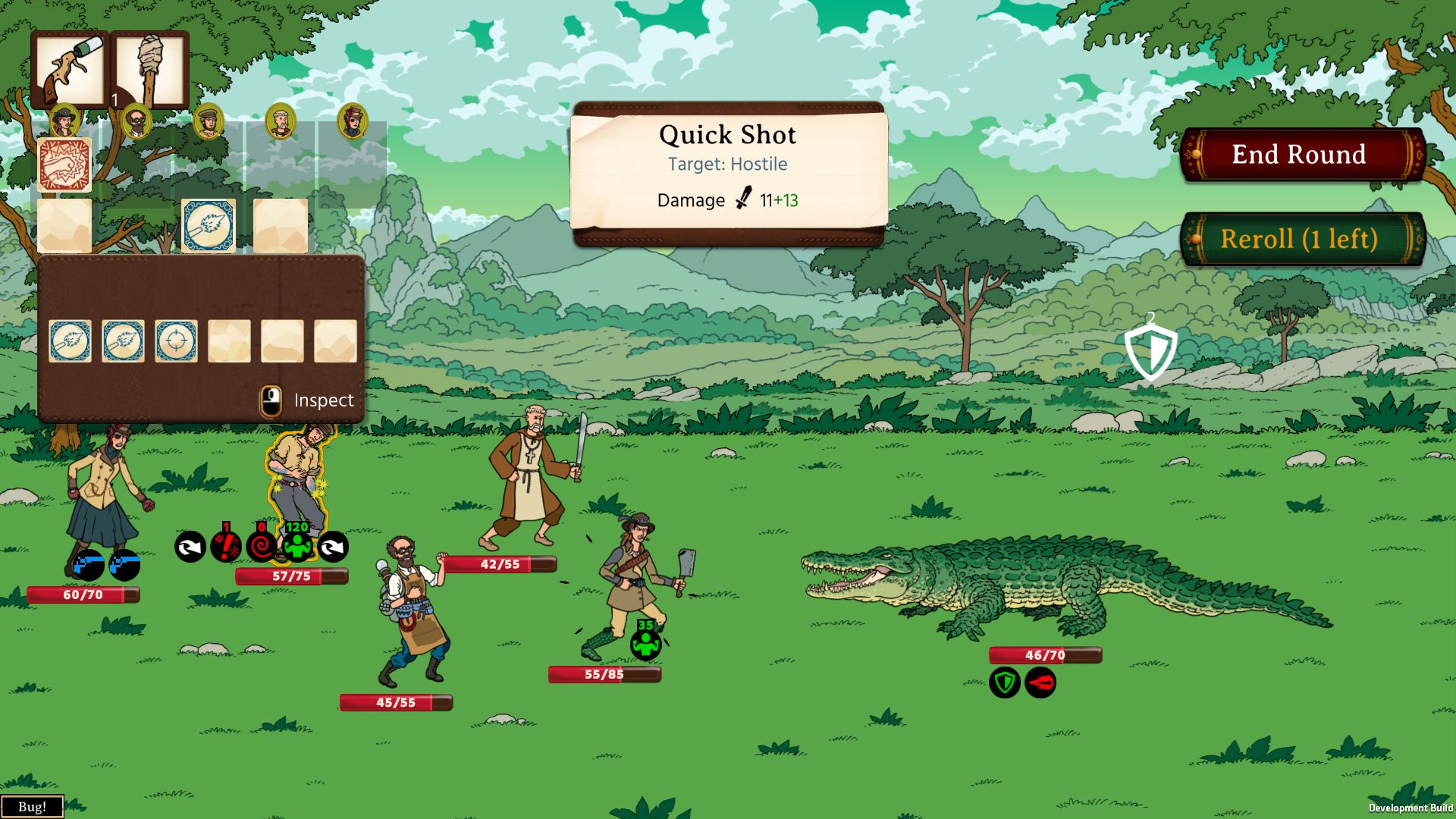 There are still dashes of what made the last game good, and even a few improvements. Those are most notable in the in-between adventure bits, where you can hang out in a pub and overhear people boast about what fish they've caught. Introducing more continuity between expeditions is a neat direction to take the series in, but there's still so much to be done - and I can't see the combat being tweaked to the point where I enjoy it. It needs an overhaul. Let me combine my dice, you monsters.

I've still got some hope that Curious Expedition 2 will wind up in a place where I want to join it. For now, I think I'll just revisit the original.