A new game from Matthew "Hexcells" Brown is always a reason to sit up and remember where you are. Cypher marks quite a diversion from the likes of Hexcells, Squarecells and CrossCells. (Although so did Sound Shift.) Although it remains a collection of puzzles presented with his distinctively clean aesthetic, this time in 3D. It's about solving ciphers. And it's really bloody tough.

The game is presented as a genteel art gallery, about which you wander through its pharmaceutically white rooms, your feet echoing loudly in the chambers as you do. On the walls, presented as art, are puzzles to solve. In front of each stands a podium into which the solution can be entered. And at the start of each room is a large art-museum-style wall with information about each section's cipher type to read. In this, the game is unabashedly educational, intending to provide a primer on various coding types, and then set the equivalent of comprehension tests to demonstrate your understanding.

Then you're set free to wander the halls, and solve what you can, while listening to various piano sonatas. It's all very relaxed and calm. Right up until you can't solve a cipher.

This is, as it happens, is where I begin to struggle with Cypher. In a game like Hexcells, or any other logic-based puzzle, finding a solution is a matter of learning the rules of the concept, and applying them. But when it comes to code breaking, if you haven't been able to discern or glean the trick behind a particular cipher, not being able to solve it presents you with little opportunity to change this. If you're stuck, you're stuck, right up until the puzzle has had a few external guides written for it, and you can go get help. Reviewing pre-release, that's obviously not an option, so perhaps my perspective is somewhat skewed here, but I feel like Cypher might be a missed opportunity for offering better teaching.

You can type in "HINT" into any console to be given a prompt. And these can be useful. They can also be as subtle as giving you only a first letter, or saying a word it hopes will push you in the right direction. Fail to be pushed, and then that's it. It strikes me, as I play, that much more could be gained from a more structured series of hints that eventually lead you in the correct direction. 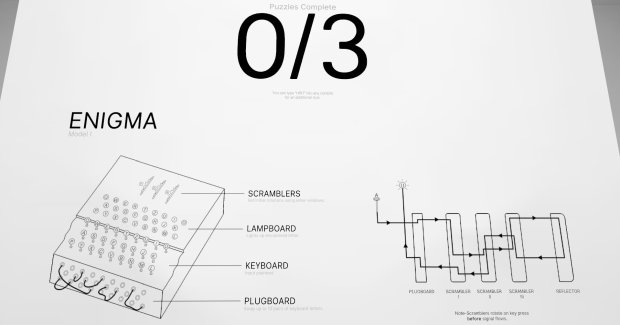 Cypher seems to want to teach. Its explanatory texts for each room suggest they want the player to understand the concepts. But the issue, certainly for me, is the lack of application during explanation. Rather than running you through an example, it gives you the theory, then asks you to walk over there to do the practice. So when I read a block of text like,

my brain says, "Uh-huh, OK..." and then waits to see it happening. But it isn't. Instead I'm faced with a puzzle that's a few binary numbers on a wall, and no notion of application.

I imagine for some there's a reaction of sympathy reading this, and for others a frustration that it's just not obvious to me.

The other issue is slightly more practical. Many of the puzzles require a pen and paper to solve. Which is great, except the puzzle's on your screen. When you've got a 60 word clue of transposed letters to solve, what you ideally want is to be able to make notes where the puzzle already is, not have the transcribe the whole thing before you can start. It'd have been great if you could interact with the puzzles on-screen, or at the very least copy them as plain text into Notepad. For instance, this is a colossal ballache to solve, despite being incredibly simple.

It's frustrating that, when sat at the ideal machine for solving substitution codes, that could let me tap a letter and see it replace all such letters in a message, that I'm having to fill pages and pages in my notebook just to solve one puzzle. In some cases I resorted to printing out screengrabs, which is not the most user-friendly approach to puzzling.

It's clear that Cypher is beyond me. The first couple of rooms were a breeze, but quickly I was finding it too obtuse, too interested in being difficult and not interested enough in teaching me how to solve it. And that's very much a personal taste thing. For people super into this sort of thing, with brains bigger than mine, this'll be a sweet treat. My issue is that in not being able to solve a puzzle, I gain nothing, and don't have the facility to find out what I needed to have known. I want to learn, to understand, and Cypher isn't going to teach me the process through application.

For those who aren't me, with their clever wiggly eyebrows, the game also features a room containing twelve cryptography puzzles that require some real-world research. Now this should be my bag entirely, but again, getting stuck means getting stuck. And the hints seem to miss the mark. Sure, I realise those letters are arranged like a periodic table - that wasn't the nudge I needed. And at that point, I'm abandoned in my unknowing. Which is a bummer for me.

But not for the clever-clogs out there, and frankly, the clever-clogs deserve more games. There are almost none, and that number rounds to zero when you eliminate those made by insufferable blowhards. So here's one for you! Just, it seems, not for me.