“You can be anyone, this time around,” echoes the husky voice of 60s trip-trailblazer Timothy Leary, as kids play on arcade machines that fade into the grinning face of the “good doctor” himself. “You’re the first generation in human history to know how to control your own nervous system.” As the soundtrack hits heady new heights of grooviness, a troupe of long-haired youngsters dancing through sunny fields appear on screen. “Change your own reality,” he smiles, as the music swells.

This is a promotional segue for retro game Mind Mirror – part psychology-lite self-help exercise, and part esoteric voyage into the “bio-energetic” realms and beyond. It’s the one and only published game written and designed by Timothy Leary, an ex Harvard professor, many-time outlaw and prolific dabbler in all things psychedelic.

Once dubbed “the most dangerous man in America” by then US president Richard Nixon, Leary’s far-out exploits include escaping from prison, going on the lam with a troupe of militaristic Black Panthers, and evangelising the healing qualities of LSD. By the 80s, he had shifted away from drugs and toward the technical arts: writing games, designing software, and advocating electronic communication. He also championed cybernetics and life extension, a set of beliefs that set the stage for what would soon be called transhumanism.

Plenty of Leary’s unfinished games have been unearthed, but only Mind Mirror was ever completed. His digital projects included a choose-your-own-adventure adaptation of William Gibson’s cyberpunk epic called Neuromancer: Mind Movie. Due to feature music from Devo, and co-authored by William S Burroughs, it was never fully realised. 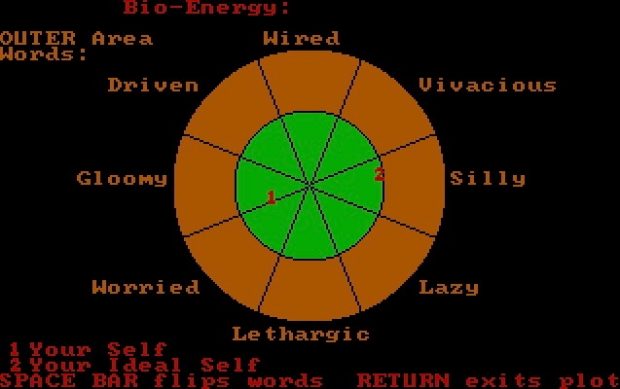 Mind Mirror was published by Electronic Arts – who were delighted to capitalize on his fame – in 1986, selling around 65,000 copies on IBM PC, Apple II and Commodore 64. Based on psychometric ideas from Leary’s own 1957 PhD dissertation on personality, the game purports to help users reprogram their brains.

Players answer questions that, when churned by Mind Mirror’s cryptic algorithms, can allegedly help them reveal intriguing new aspects of their psyche. Gameplay predominantly revolves around defining, comparing and then role-playing through different personalities in various text-based life simulations.

Mind Mirror begins with an appropriately psychedelic purple vortex, numerous options flashing in its pixel depths. Whichever choice you go for, it all begins with a Self Portrait – an in-depth personality profile – which involves completing a breakdown of your ideal self, and your shame-stained present self. You can also decide to role-play something completely different, instead choosing to be a film character, city, or idea.

You are now ready for the Life Simulator. Timothy Leary’s extravagant written voice – often incorporating rhyme and odd-ball phrases – guides you from cradle to grave, whether you choose to get born in 1960s Israel or a 2001 space station. 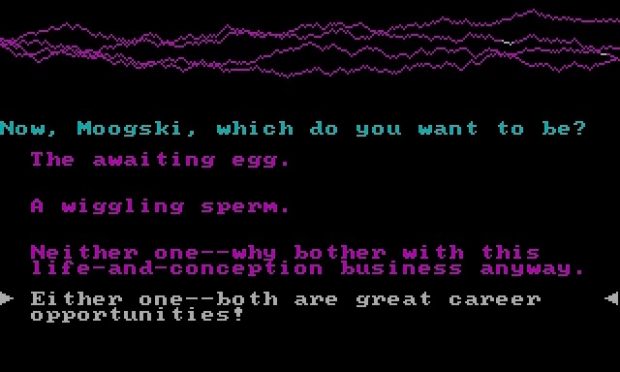 A surprisingly extensive range of life-simulation levels exist; you can experience your literal birthing, early childhood memories or a flashy career in film. As you begin your journey as a singular sperm within the human body, an ominous green sign warns you to proceed up the Fallopian Tube at your own discretion.

Mind Mirror is often silly: chock-full of irreverent phrases, puns and cultural references ranging from the Beatles to Ghostbusters. One section is titled: 2001: an Overheated Teenage Odyssey. In another, you can declare yourself “an omelette of gloom”. For all of its mystical overtures, it’s surprisingly self-deprecating.

Occasionally, it throws a snarky response at you, like declaring “bodybuilding discovered!” when you fail to stand up to a bully. Another time the game chides you for not speaking up during a facsimile of a typical school memory. “Invisibility is the key,” it warns sarcastically, “don’t leave home without it.” Presumably, this was the “life-coach” feature of the title. There are levels where you simply tick films you’ve seen, giving the whole experience the aura of an eerie quiz game, or haunted but generally amenable mental health assessment sheet.

It is also very much – as EA likely intended – a vehicle for Timothy Leary. His voice, patterns of speech, and mindset are dominant forces in the game: there’s no escaping them. It’s like interacting with Leary’s ghost, who’s straddling a fine line between chipper and completely bonkers. 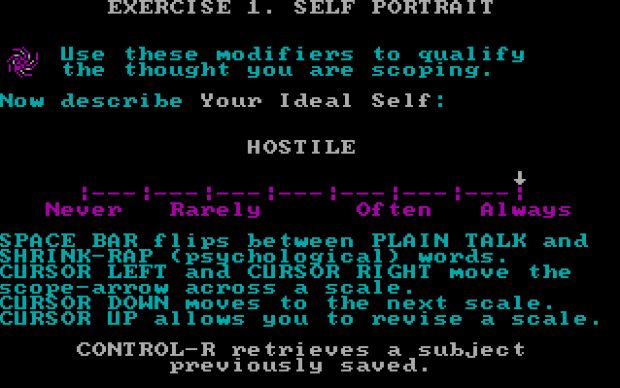 This is all made all the more surreal when you take into consideration how surprisingly thorough Mind Mirror is in its attempts to “reflect and qualify thoughts” – there’s clearly tons of variables being mulled in its olden algorithms. However, the extensive text options, scale sliders and tick-boxes are not exactly thrilling. As Leary once said regarding the ‘60s; it’s unclear where everything’s heading in Mind Mirror.

For all its flaws, the game is filled with curiosities reflecting the counter-cultural mindset. “You’re not stoned! You’re cloned!” it exclaims during a particularly harrowing scene in-utero. Leary was a very distinctive writer and orator, and his off-the-wall humour and exuberant visions are perfectly captured in the vast, yet maddeningly repetitive Mind Mirror.

Although it seems primitive now with its is outdated ‘60s rhetoric, the game is rife with far-out ideas – albeit executed shabbily – some of which are only just beginning to be explored in technology today.

For example, VR project Real Life aims to use gaming, specifically in-depth “real world” style simulations, to decrease recidivism among prisoners. Even studies such as The Bartle Test of Gamer Psychology – which divides MMO players into different personality subtypes – are emblematic of the type of thinking Leary tried out in Mind Mirror. While these projects are likely in no way directly connected to the game, Leary remains ever the pioneer; one of the very first to marry psychology with interactive gaming.

You can't buy Mind Mirror any more, but it can be run in a DOS emulator and it's probably really, really easy to find ways to play it if you search for it online.