Fraser has found himself the owner of a filthy pub in this week’s Premature Evaluation. He’s been playing Epic Tavern, an RPG management game filled with beer and rats.

I now own a tavern, and it feels like I’m finally living out my dream life. I always said, if I wasn’t writing about video games… well I’d probably still be project managing charity events. But if I wasn’t doing that… actually I did consider sticking around at university and getting a PhD. But if I wasn’t trapped in academia, becoming an astronaut or getting paid to be a ghost writer (as in a writer for ghosts), then I’d almost definitely own a pub. So yeah, I’ve really made it. Welcome to The Thirsty Kobold.

Many names were discarded before I settled on The Thirsty Kobold, including The Obnoxious Ogre, The Fox and Dire Wolf and The Inn of the Beholder, but ultimately I felt that this one in particular really captured the essence of my watering hole. Come in and get drunk, but don’t expect anyone to clean up after you spill your pint and vomit into the fireplace. 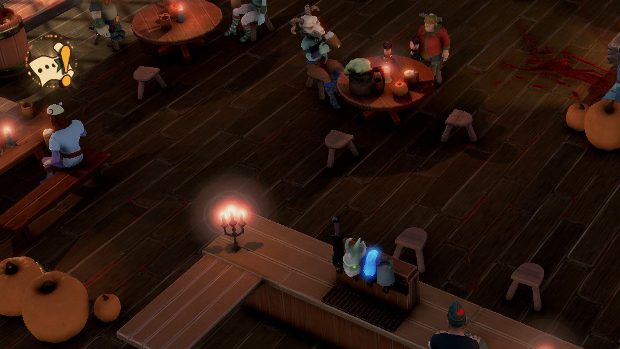 I’ve already got a few patrons because alcoholism is rampant in the majority of fantasy lands. It’s the lack of solid job opportunities that does it, I reckon. And there’s the constant fear that a gang of Orcs is going to kick in your door and eat your family, of course. Life is hard, and I’m more than happy to reap the profits.

Patrons serve two roles in Epic Tavern. They spend money on food, drink and various services, but they also serve as quest-givers, which is a little confusing given the game’s conceit. See, as the tavern owner, I arrange adventuring groups and send them out on potentially fatal but lucrative excursions, but it’s the very adventurers that I’m organising who give me the quests. And often, those quests relate specifically to my tavern. Why adventurers are giving me quests to clear out my attic or expand my wine cellar I’ll never know.

I’m getting ahead of myself, though. When new patrons enter the tavern, I don’t know anything about them. First, I’ve got to welcome them to my lovely establishment, and then I get some information to work with -- their name, class, how much they like me. Eventually they’ll spill the beans about their backstory, but that’s not in this version of the game, except in a couple of cases. Getting to know my patrons doesn’t just contribute to The Thirsty Kobold’s world-famous friendly atmosphere, it also gives me hints about what food and drink they like, and how much use they’ll be in the quests I have access to. 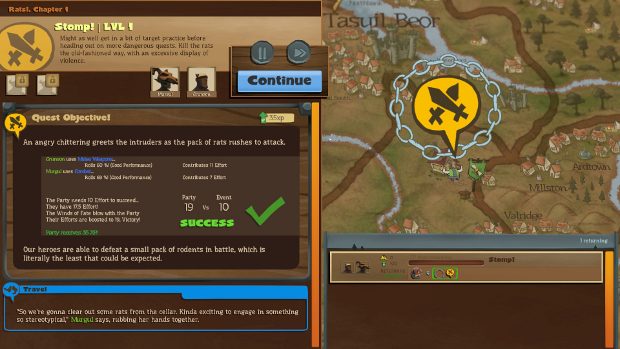 Predictably, a patron tells me that some rats need to be murdered, for which I require two hearty adventurers with nothing else to do today. Grunson the barbarian and Murgal the fire mage are the only other people in the tavern, making them absolutely perfect for this quest. When there’s a rat infestation, delays only make it worse, so I send them off right away.

Even for a pair of fresh-faced adventurers, the rats don’t pose much of a threat, and they end up back at the tavern, guzzling booze while dripping rat gore all over my lovely floor. Quests largely run their course with minimal intervention, aside from the occasional roll and a prayer to the gods of RNG, but there are a few things that can be done to change the odds beforehand.

Adventurers all come with a character sheet full of skills inspired by tabletop RPGs; everything from spycraft skills, like interrogation, to the ability to cure poison or wounds. Each of these skills can be enhanced when an adventurer levels up, but they’re all essentially there for flavour. It doesn’t seem to matter if a character is great with swords or maces or healing in combat -- these numbers just contribute towards their combat score, and the higher the score, the more effort they put into combat encounters. It works the same way with social skills, mind skills and survival skills. Except when it doesn’t. Sometimes the combat log shows adventurers using specific skills instead of general ones, and I haven’t a clue why. Hovering over the skills in the log just reveals a “coming soon” tooltip. 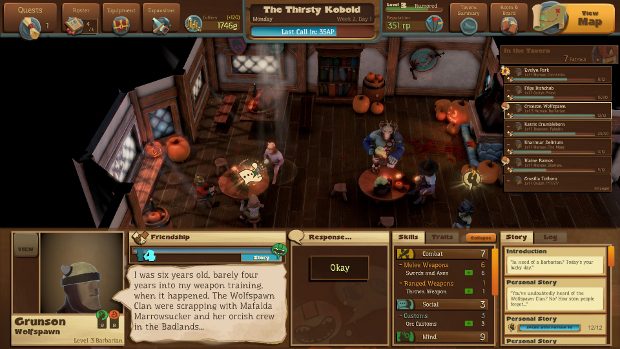 Back at the tavern, I’m making lots of new pals. Customers are pouring in, and the more I listen to them blether on, fatten them up with porridge and get them drunk with ale, the stronger our friendship becomes. From the outside, I realise that it looks like I’m buying friendship, and that’s exactly what I’m doing, but it’s increasing my tavern’s reputation, and I really need the help. I mean, I have two items on my menu: porridge and beer. When you want breakfast, but your life’s hit rock bottom, come to The Thirsty Kobold. Clearly I need to sort out my brand and make my menu a little bit more palatable.

As my party of adventurers haggle with a barbecued rat vendor, I start to wonder if I’ve made some poor choices. One roll later, and I not only have some barbecued treats, but the recipe too. Tragically, there’s no evidence of my delicious rewards once the quest ends. Nothing in my inventory, or in my recipe list. After increasing my reputation again, it pops up when I’m serving a patron. I have none in stock, but I’m still somehow able to sell the patron one rat. I now have -1 rats. I stop selling my gullible customer invisible rats after the fifth. It’s very profitable.

With a higher reputation, I’m able to hire more adventurers, including Vultog, a huge Orc cleric. Vultog’s a lovely guy. He eats and drinks all day and night and seems to enjoy everything, and I find his absolute certainty that he’s going to become the greatest cleric in the world quite endearing. I send him on many adventures and he always seems to come out of them without a scrape, playing a big role in their successes. He tracks down a magical, disappearing shop for me; rescues some farmers, killing a bunch of monstrous bugs in the process; and he helps me establish an infirmary. What a guy. 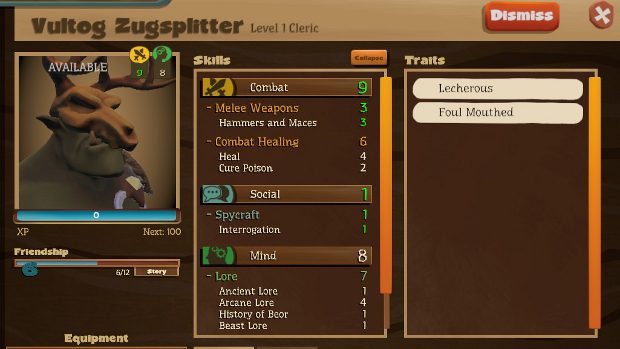 Unfortunately, on closer inspection of Vultog’s character sheet, I discover something unpleasant. He has two personality traits: lecherous and foul-mouthed. He’s The Thirsty Kobold’s Milkshake Duck. This is why you never start friendships or hire adventurers before properly evaluating their character sheet. How these character traits actually manifest themselves is not clear, but I’m not going to take any chances; I swap Vultog out for Blaze Stonemaw, a land pirate. Her skills include carousing, shooting things with her flintlock pistol and not being a lech.

Aside from this HR nightmare, things are going quite well in The Thirsty Kobold. I’ve got plenty of bottles of Elven wine, it’s a popular tipple, and enough barrels of ale to satisfy even a Dwarven stag do. I’ve got more customers than I know what to do with, too. Interacting with a patron costs action points, and when I spend 50, the day ends. This limitation forces me to prioritise. If I’ve got only a few points left, I’m probably going to serve the person who wants some wine, not their mate who has come into a tavern and only wants to drink water, because I make more money out of the former. And if I’m close to levelling up my relationship with a customer, and thus my tavern’s reputation, then I’m going to be more likely to focus on them.

I can also throw logic out the window, however, and just serve whicher patron I want. Maybe I like this assassin’s hood, or perhaps I want to be especially nice to people with big beards because they might be powerful wizards. Outside of levelling and gearing up my adventurers, Epic Tavern offers up so few choices that I covet those moments where I get to decide what actually happens, even if it’s just deciding to feed an Orc their body weight in barbecued rat. 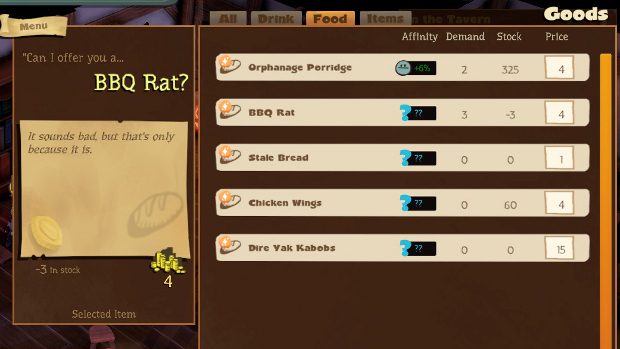 That’s what I’m doing when a new patron walks in and tells me a rumour: the rats my adventurers killed have come back. As zombie rats! And they’ve infested my cellar. How does this man who I’ve never met before know more about what’s going on in my tavern than I do? Did he plant the rats there? It’s suspicious, but I can’t interrogate him further. Instead, I must send out my party once more, to discover the source of these undead vermin.

We discover that there’s a necromancer in town -- it’s always bloody necromancers -- so we decide to pay her a visit. The party ask her to stop it with this rat nonsense because it’s simply not hygienic to have the animated corpses of undead critters scurrying around a business that serves food. She says no because of some bad rolls and that’s that. Quest permanently failed. Except a new quest appears, tasking me with covering up the holes in the walls where the rats are getting in. RNG is definitely not on my side, because my party fails that roll as well. But… the holes still get filled in, and the necromancer is so impressed that she decides to become a customer and, eventually, a member of the adventuring troupe. 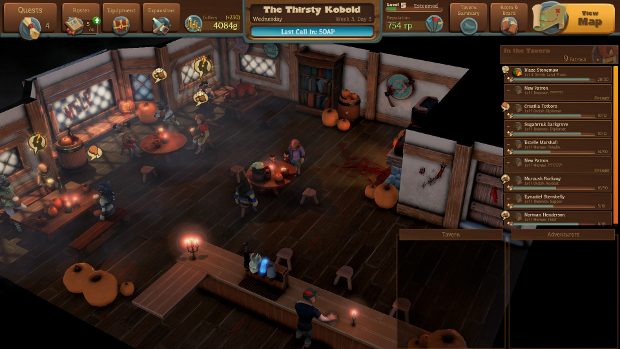 Don’t get me wrong -- its great that I’m failing my way to success, but it’s also leaving me feeling a bit superfluous. I’m just the guy who clicks the ‘roll’ button, and apparently those rolls don’t matter all that much. I feel less like a tavern owner and more like a part-time waiter who also follows adventurers around, offering to make their rolls for them in case they sprain their wrists. It’s a management RPG, but there’s very little role-playing and, at the moment, it’s pretty light on management too. My one achievement is, after several hours and bunch of failure, I’ve made The Thirsty Kobold a rat free zone. If you don’t count the mountain of barbecued rat that I’m trying to feed people.

It turns out that running a tavern for adventurers doesn’t quite live up to the dream, so I’m boarding up the windows and packing my bags. Maybe The Thirsty Kobold will open its doors again one day, but I’ve had my fill of rodents and necromancers.