We must experience wonderfulness where we can these days, and last night I experienced squealing excitement like I haven't for a while when I saw footage of an in-development platformer about a tiny spider with laser eyes.

The video in question was shared by developer Riley Neville, aka Sbug Games. You may have played Sbug's previous game STAB STAB STAB!, a physics-y couch multiplayer game where round birds with big legs and stabby beaks try to burst one another. The untitled spider game is significantly less nightmarish. Unless you're an arachnophobe, I spose.

Isn't it the cutest thing you've seen in your entire life? It gave me strong Lucas The Spider vibes, with the little tippy-tap sound of the little stumpy legs, and the little dance at the end there.

Neville shared the video on Reddit, as well as a few more details. Currently the game is going to be about "a happy little laser spider who has to rescue her boyfriend who was kidnapped by a big dumb bowerbird". They also shared a few other gifs to show off extra physics stuff, like how the spider is encased in a little bubble of air when she goes underwater

Check out Neville's Twitter feed for more tiny spider goodness as it comes.

"But Alice!" I hear you cry. "Why are you telling me about yet another thing I can't enjoy right now, but must merely yearn for, for an unknown length of time?" Well, fortunately you can play a little prototype for the concept on Itch right now! The Laser Spider Playground features an incredibly cute spider, branches to web around in, and flies to stun with your laser eyes. You may then web up and eat the flies.

As you can see, I am not very good at being a spider, but I had an incredible amount of fun playing around with this this morning. It's a bit hard to get the hang of to start with, but very soon you'll get right in the swing of things (lol). You can also anchor webs to build your own structures, and when you jump you can make a little web parachute to float around on. 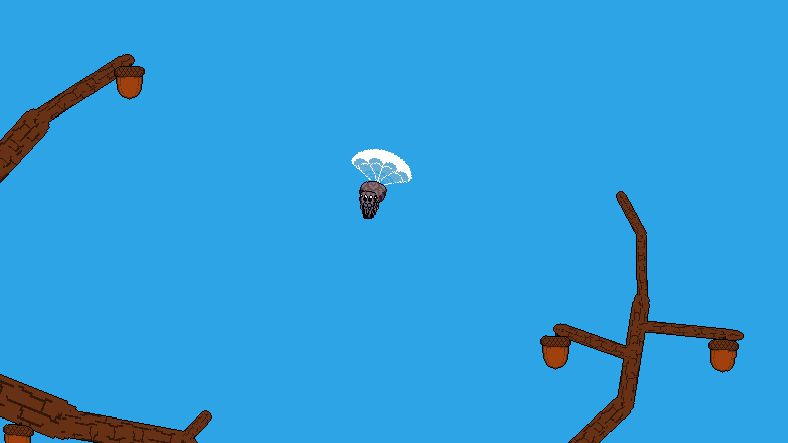 I also tried to make a realistic web, and I'm pretty sure you could do it it if, unlike me, you had a clearer understanding of how spiders build their webs in real life. I had a go and it ended up a bit cackhanded, like it would appear as a mum meme on Facebook with 'THERE ARE MANY LIKE IT BUT THIS ONE IS MINE' written across it.

However, I encourage you to have a go and build your own web. I guarantee this little game will lift your spirits for a few minutes (unless, as mentioned, you're an arachnophobe). The playground is free in browser, or you can download it and pay what you can.