I really should be playing games about sunshine and whimsy with warm colour palettes and chipper NPCs -- here, in the depths of winter, it’s gloomy enough as it is. Fade to Silence has huskies though! Well, they’re wolves, but they do pull sleds. Isn’t that lovely? Winter’s not all bad. Yes, Fade to Silence is a relentlessly miserable survival game set in a post-apocalyptic frozen hellscape, but I’ve always wanted to ride a sled, and I like to think that I’m not the sort of person who would let the end of the world stand in the way of his dreams. 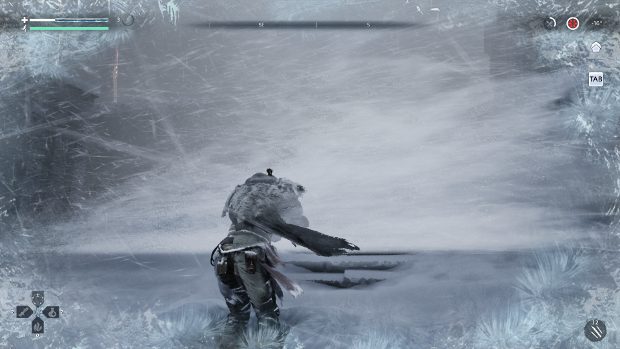 The sled was gone. Again. And with it, the wolves. A blizzard had swept in as I searched the area where I left them, blinding, freezing and slowing me down. With snow up to my knees I trudged through the wilderness, hoping that maybe I could get back to the base. I was starving too, of course. I'd foolishly left all the food in the sled. I kept walking, but I was never going to make it back in time. The white void took me.

I’m not going to blame the sled for my demise. Not entirely. Besides, it’s hard to hold a grudge when I have another five lives, or when there are so many other dangers to worry about. Aside from the occasional bird or deer, almost every creature in the game is some sort of mutant-monster-demon-thing that may or may not come from a giant floating chunk of a city, suspended upside down in the air. They look a little like Dead Space’s beasties, but not nearly as sneaky or aggressive. They do sometime pop out of the snow, though. Snow’s the real danger. Well, it’s a byproduct. 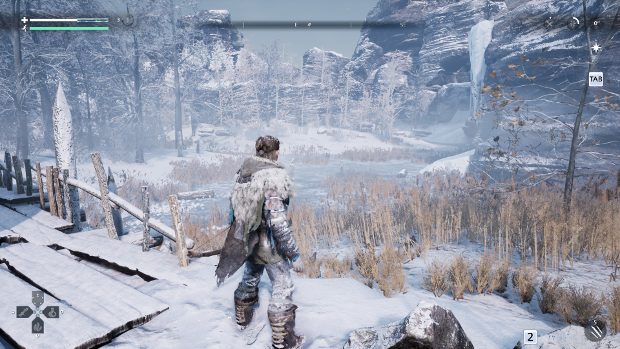 The horrendous cold is a significantly greater threat than any monster. Away from a fire, it’s freezing, and it gets colder still when the sun goes down. It’s utterly deadly during a blizzard. Even brief journeys require the occasional stop to find or erect a shelter and then place a campfire. There are a few buildings with steel drums that can serve as temporary camps too, letting you craft and pass the time during a storm or when it’s dark. It’s a constant threat, though.

I wanted to build my sled straight away, obviously, but it quickly became clear that I’d need quite a few resources, probably a follower and definitely a wolf. Since it’s a single-player game, you can’t rely on other players to help you build up a settlement or take on the increasingly tough challenges, but you don’t need to go it alone, either. Fade to Silence’s hook is that it’s a group survival game, not unlike excellent zombie sandbox State of Decay. 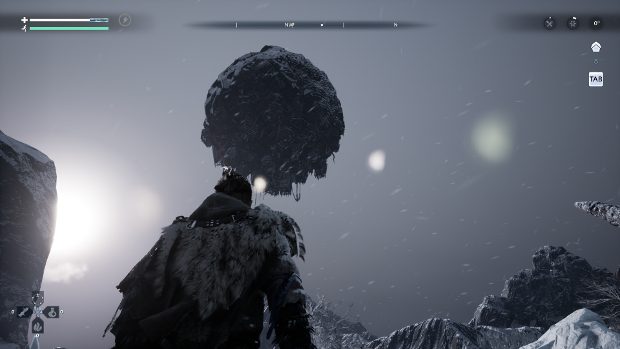 Unfortunately this is also one of the least developed parts of the game, with only three recruitable followers. Four people in a hut isn’t even a party, let alone a community. Even so, these followers do shake up the most boring part of the survival cycle: gathering basic resources. Followers can be sent out of the settlement to do tasks like hunting deer or felling trees in specific areas where the flora and fauna haven’t been corrupted, and inside the settlement they can build structures and defences as well as doing a spot of crafting.

While this removes a lot of the drudgery, it also means that you have to make sure that your followers are protected, well-fed and warm. It’s another vulnerability, even if it makes life easier. Too often, survival games conflate inconvenience with challenge, but Fade to Silence feels no less brutal for the loss of that grind. Some of it’s still there; it’s just optional. So you can go out and shoot arrows at deer or chop away at a tree, and there’s loot out there waiting to be discovered, but these activities are a handy way to speed things up in a pinch rather than a constant necessity. 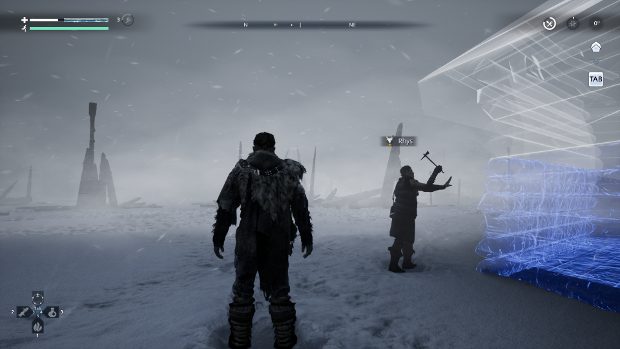 Actually managing these followers is a joyless task. Fade to Silence’s interface is almost as big an obstacle as the weather. When menus do actually work -- which they most often don’t -- they are slow and frustratingly inconsistent.

When I placed my first hut, for instance, I was told that I couldn’t assign a worker because I didn’t have any. I had one standing right next to it. Then I hit repair and he started building it. With building number two, he started automatically. While that can be done from the settlement menu, you have to physically bring a follower to a resource spot if you want them to start gathering. That worked about 50 percent of the time for me. 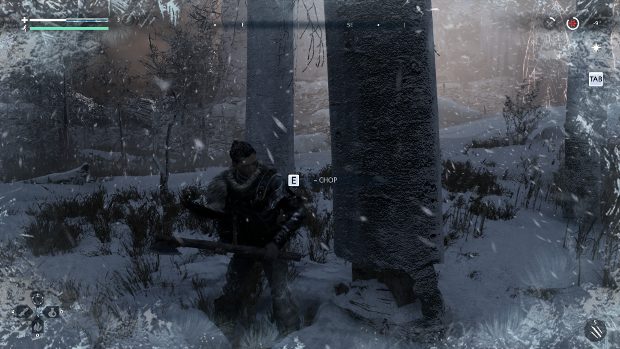 Followers can also be brought out on expeditions, helping out in fights. They are largely useless, serving either as a distraction or an occasional increase in damage, when they can hit something. They are also continuously getting stuck on the admittedly very rough terrain. Thankfully, they have something akin to Creepy Watson syndrome, so they do typically appear when they are needed.

I still wish they could do all of my fighting for me, frankly. When you happen across something a bit unfriendly, you can and should lock onto it. If you don’t, you’ll just stagger around like an idiot. The first problem is that this makes the occasional fight against multiple enemies a right pain in the arse, especially when there’s no way to quickly switch targets unless you’re using a controller. Unfortunately, locking onto a target comes with its own problem: a fixed camera that manages to obscure everything. It’s a cinematic angle that’s completely useless for combat. 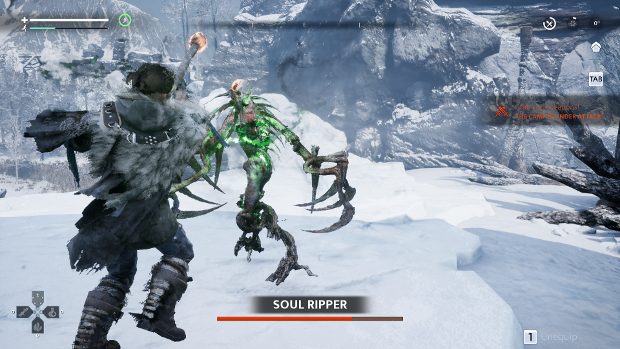 With tighter controls and an improved camera, the fights would be significantly better than what most survival games offer. It’s what you’d expect from a third-person action game with blocking, dodging, timing your parries and chaining together attacks, light and heavy. It’s simple and the enemies rarely pose a viable threat, but slick animation, kinetic attacks and grotesque monster designs keep things interesting. Compare it to something like Conan Exiles’ poorly animated Skyrim-like flailing and it’s a serious improvement.

My closest brushes with death in a fight have usually been down to performance, despite the dodgy camera. Even on the lowest settings I was rarely getting past 40fps and it never settled. The lowest settings also introduce a whole bunch of visual glitches, so it’s just not worth it. 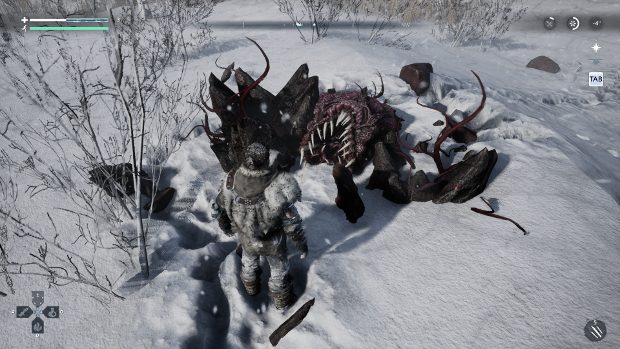 I persevered however not just because I really wanted that bloody sled, but because Fade to Silence does feel like a genuine attempt to avoid a lot of the more staid traditions of survival crafting affairs. And its goals seem lofty -- it’s not just games like State of Decay that it evokes, it’s also reminiscent of bigger, open-world games like Horizon: Zero Dawn, too. It’s a cold, desaturated game, but it’s also hauntingly beautiful at times, and there’s a flashiness there that’s not often seen in early access sandboxes.

A few hours in I did at least have to mute it. Ash, the protagonist, is a pretty quiet, stoic fella, but he’s accompanied by the voice of the terrible nuisance who brought him back from the dead (for some reason). I get the intent and it worked well in The Darkness and its sequel, where Mike Patton (Faith No More, Mr. Bungle, Tomahawk and a million other bands) lent his pipes to the titular antagonist, but here it’s just aggravating. It’s like inviting a toxic League of Legends player to watch you play a single-player game. Despite resurrecting you whenever you die (until his final life is spent), he’ll constantly try to get you to kill yourself. It’s just this relentless, negative voice echoing around in your head and most of us probably have one of those already. 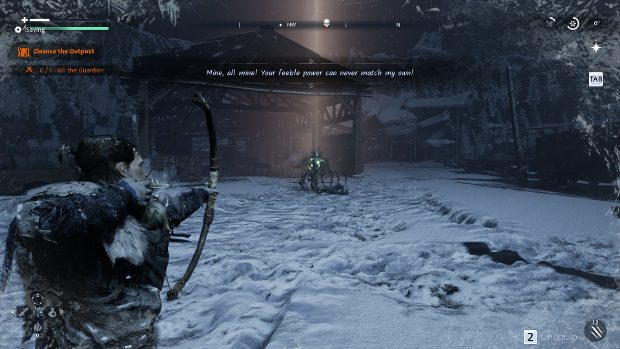 No longer pestered by that disembodied voice, I got back to work, eventually finding some wolves when I cleansed a corrupt totem near one of the bosses. Maybe they were inside it? Anyway, treasure acquired. It had all been building up to this, so I was giddy with anticipation as I made my way back to the settlement to build their pen. It came with a ready-to-go sled, which I promptly jumped on... and which teleported me outside of my base. I stood there and watched as my wolves ran off, leaving me to face an invading force of monsters. It was not great. 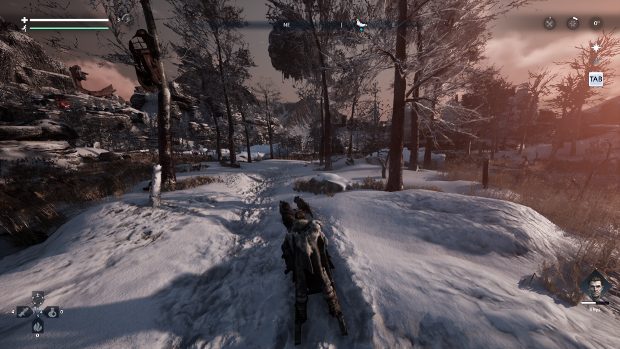 Yes, sleds are awful. The worst mode of transport, unless you have flying reindeer. I did not. Like The Witcher 3’s Roach, the wolves sort of have a mind of their own, but it’s even more pronounced. As we sped through the decayed forest, I offered them suggestions about where we might go, and they just did their thing, which mainly involved getting stuck on everything. They got stuck. The sled got stuck. The reins got stuck. Walking would have been faster. Then, finally, I was forced off my sled because the wolves didn’t like the area ahead of us. I got back on to turn them around, but was immediately ejected again.

As I stormed off, leaving my obstinate pets behind me, I couldn’t have known it would be the last time I’d see them. Twenty minutes later I’d be a frozen corpse.