Only a month ago I wrote about Family, a free investigation game about plotting the movements of musicians across a (fictionalised) '80s London music scene. By placing the right people in the right bands at the right times, you're drip fed more clues so you can then place more names, and so on.

Well, turns out that was just warming us up. Meet Rivals, broadly the same thing but longer, tougher, and about tracing 20 years in the careers of two school friends who formed a high school band and then almost immediately broke it up to do their own separate bands.

Once again the brainchild of Tim Sheinman (including musical tracks from fictional albums), in Rivals you're placing the chapter titles of a biography of Luke and Josh in the correct order. Each slot for a chapter will give you the month and year, while the titles to choose from give you only a key event that happens then. Your job is to cross reference the dates and info until you have five chapters in their correct places, at which point they're locked in and you get a few new clues.

For example, one early clue is an invite to a farewell BBQ for Luke moving to Nashville, taking place in March. This links up with the chapter title "Country Roads" - but there are several chapter slots in March, so you can't be sure where to put Country Roads until you figure out which year Luke moved.

Rivals is, as I said, tougher to figure out than Family, and took me roughly three times as long to finish. The mix of clues you get - emails, letters, forum posts referencing song lyrics, the songs themselves, interviews and answerphone messages - are really well done. In some cases they reference real world events that you need to Google to get a timeframe. 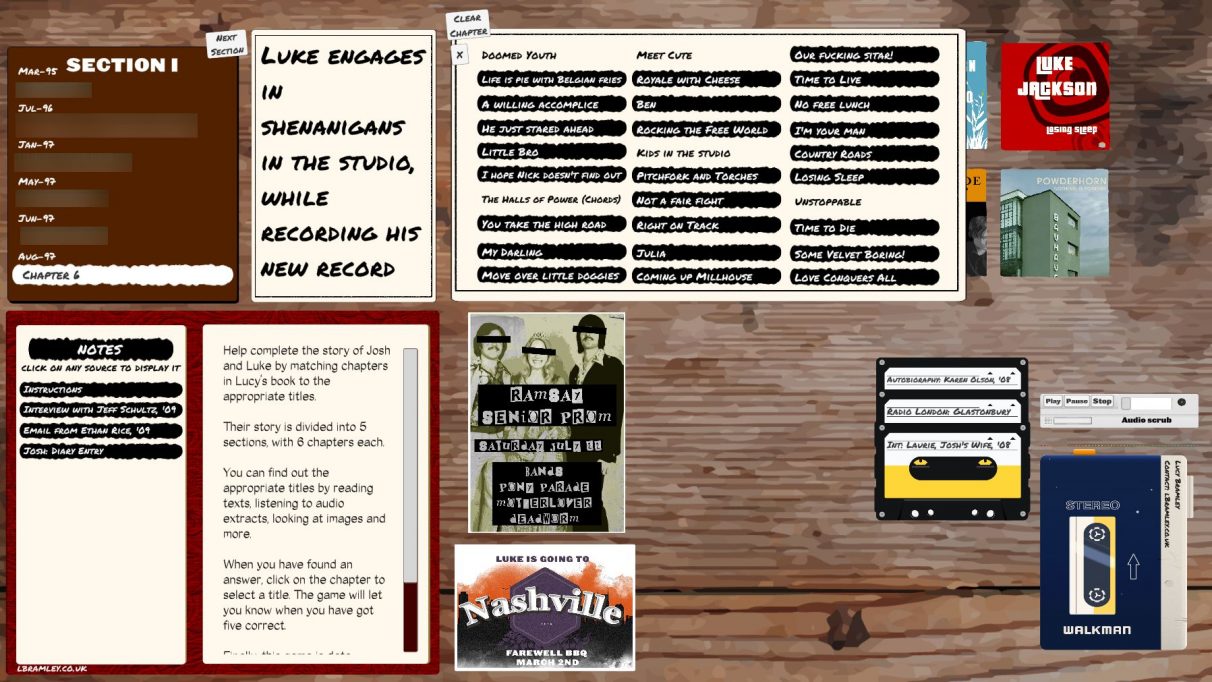 It's also all in a slicker package than Family. Rivals almost feels like you're sitting at a physical desk. You gradually accrue a pile of cassette tapes on one side, and they wiggle as you mouse over them like you're actually flicking through them.

The only problem is that I enjoyed the story that I was putting in order much less this time. I think it's very funny that Luke, the aspiring almost-country auteur of the two central characters, releases a series of decreasingly successful albums, including one called Luke Jackson Sings The Songs Of Luke Jackson. I liked that their prom band was called Pony Parade. I don't doubt that Luke and Josh are well observed characters that contrast each other well.

I'm just far less interested in "two dudes who are creative musical forces have a falling out and weirdly obsess over each other for years" than I am seeing the semi-incestuous manoeuvrings of guitarists between different bands in one big music scene, as in Family. I feel like the relationship in Rivals is one that I have seen versions of a lot already, and one that gets talked about loads in real life all the time. The perpetual cycle of John and Paul.

Doesn't make the process of unpicking it and getting it in the right order less satisfying, though. That has not and does not get old, so Rivals is still strongly recommended - particularly if you partook of and enjoyed Family for free. Rivals is on Itch and Steam now for £4.80/$6/€5.