They live in compounds deep in the mountains, sharing conspiracies about who really runs things while cleaning their illegal firearms and awaiting the end of the world. One, channelling Donald Trump, is running for the Montana legislature and asks you to suppress disproportionately black voters opposed to his far-right agenda by murdering them. His ex-wife kills “flag burning socialists” from a helicopter with the efficiency of a South American military junta.

They are somehow the best anti-fascist heroes Ubisoft could come up with for Far Cry 5.

We’ve seen a few games released during the Trump administration attempt a critique of fascism in America. The ones that succeed aren’t afraid to tell players that white supremacy isn’t some weird aberration in an otherwise egalitarian republic, but a founding principle of American democracy. 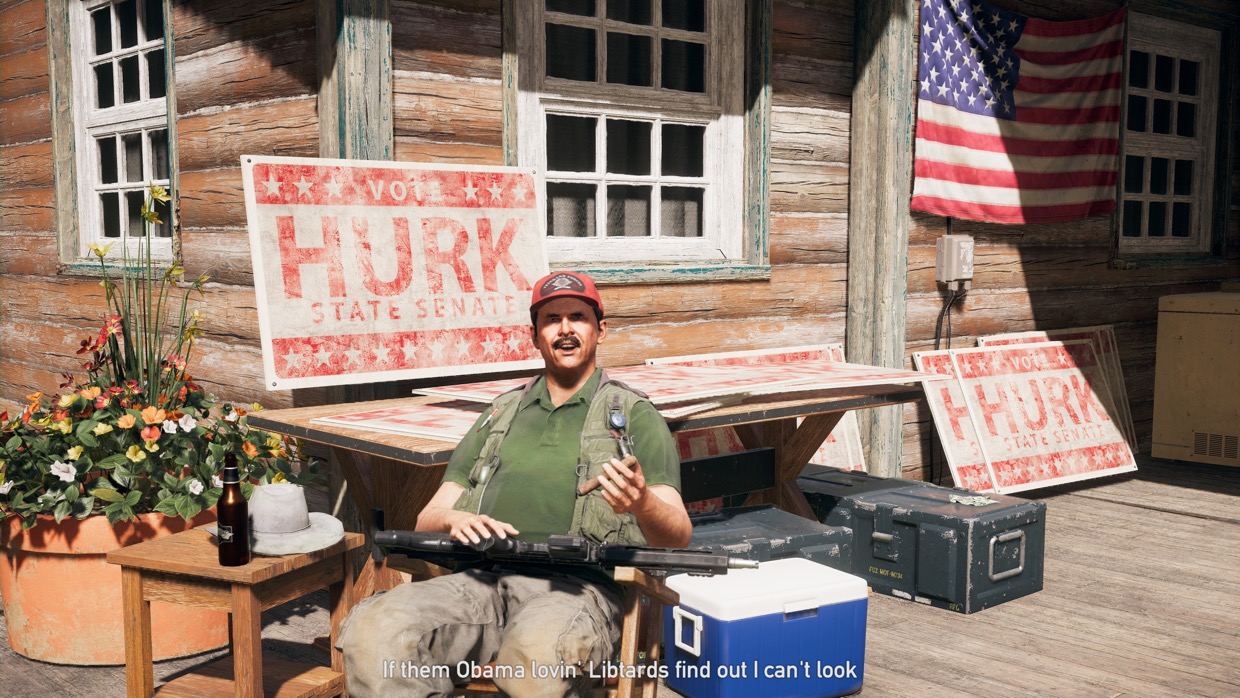 By contrast, Ubisoft clearly wanted the aesthetic of resistance to fascism in America without all the baggage of critiquing whites, Christians, Republicans, police, and the other groups intertwined with fascism.

Bald-faced fascists don’t congregate in inordinately large numbers everywhere in America, but they do where I live: northwest Montana, not far from the Idaho panhandle. The main reason neo-Nazis, militias, white supremacists, and other far-right groups have thrived here for decades is the demographics, which are about as white and conservative as they come.

The Militia of Montana, Montana Freemen, Prussian Blue, Pioneer Little Europe, ACT for America, Radix Journal, the National Policy Institute, Richard Spencer, the Daily Stormer, Liberty Fellowship -- these are just some of the fascists that Montanans have allowed to give their state a reputation so bad that even Ubisoft heard about it. Beyond some passing aesthetic references to non-fascist cults outside Montana like Heaven’s Gate and the Peoples Temple, the inspiration behind Far Cry 5’s Project at Eden’s Gate is all local. 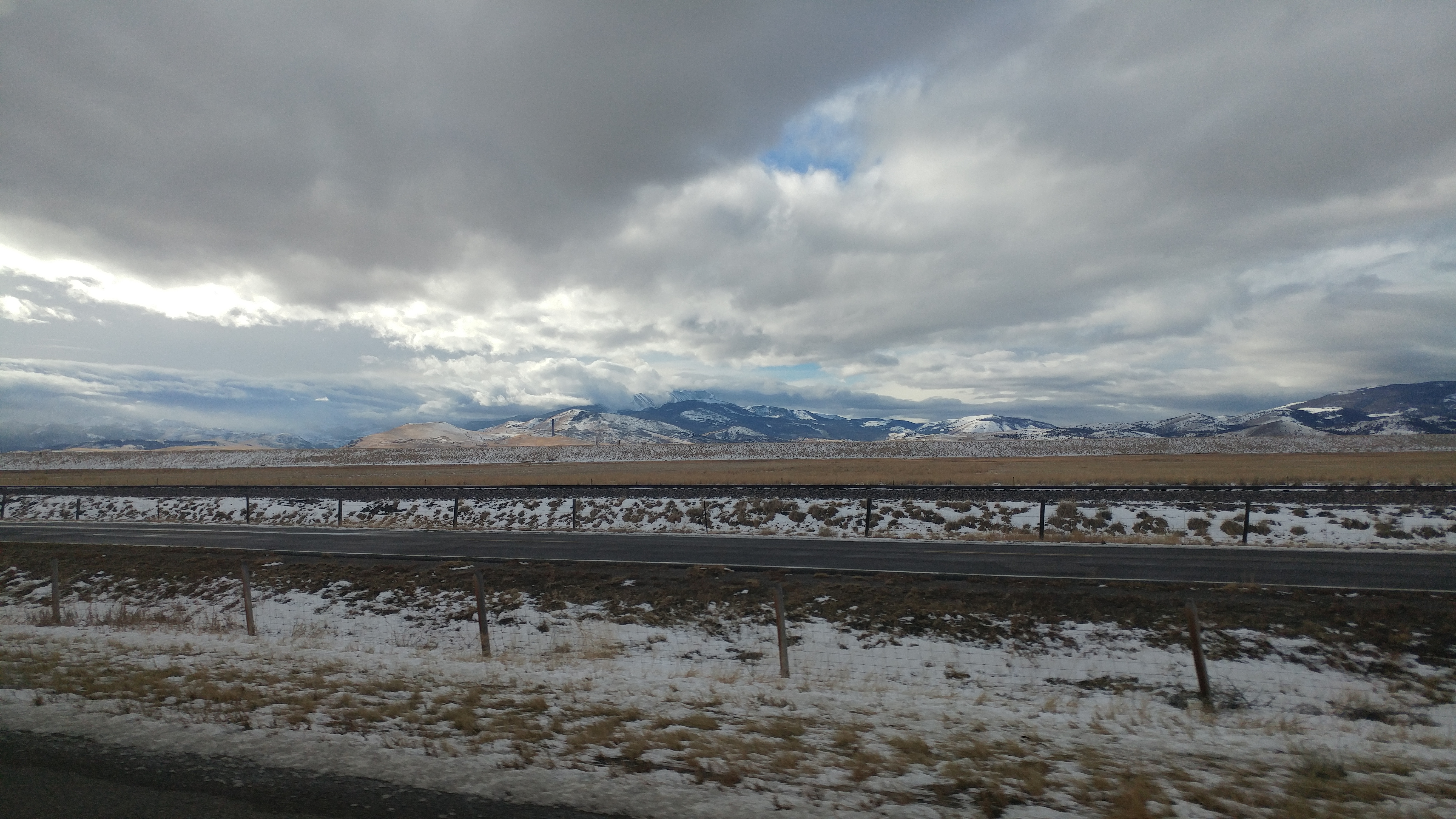 And that’s what makes Far Cry 5’s botched take on fascism in Montana so disappointing. Despite being an obviously Christian cult, the cultists sure never talk about Jesus. They weirdly aren’t anti-Semitic either, not that Ubisoft included Montana’s persecuted Jewish community in the game, and seeing as how every third cultist you shoot is black I guess we’re supposed to assume they’re not white nationalists either. Any time the game has an opportunity to offer the most basic critique of white America through representation of its worst actors, it backs off.

The tolerance of the region’s white majority is what originally attracted fascists to this part of the country, a story best told (CW: graphic violence) by David Neiwert, who edited a small Idaho paper when the Nazis started showing up, and now tracks hate groups for the Southern Poverty Law Center.

To summarise, an anti-Semitic church founded by a Klansman relocated from California to the Idaho Panhandle in the ‘70s because local demographics put it pretty close already to a white ethnostate. The church’s Hayden Lake property became known as the Aryan Nations compound, which violent neo-Nazis flocked to, sparking a deadly crime wave in the ‘80s.

That caught the feds’ attention, and they tried to get one of Idaho’s new transplants named Randy Weaver to infiltrate the Aryan Nations, as he’d been to their rallies and the feds had him on gun charges. Weaver refused, the feds went to arrest him, and the 1992 Ruby Ridge standoff left three dead, birthing the militia movement alongside the far deadlier Waco siege the following year.

Idaho’s fascist activity has died down in recent years, but across the border in Montana things have picked up with the rise of the alt-right.

Given gaming’s diversity problem, it feels weird to critique a game for having too many black people, but it’s an inaccuracy that points out how fundamentally Ubisoft misunderstands - or doesn't care - how Montana’s demographics are the result and enabler of white supremacy. Montana is dead last in the United States for African American population by both percentage (.67%) and headcount (4,027) according to the 2010 census, and I’m confident none of those people are members of white nationalist militias, though in Far Cry 5 most of them are. 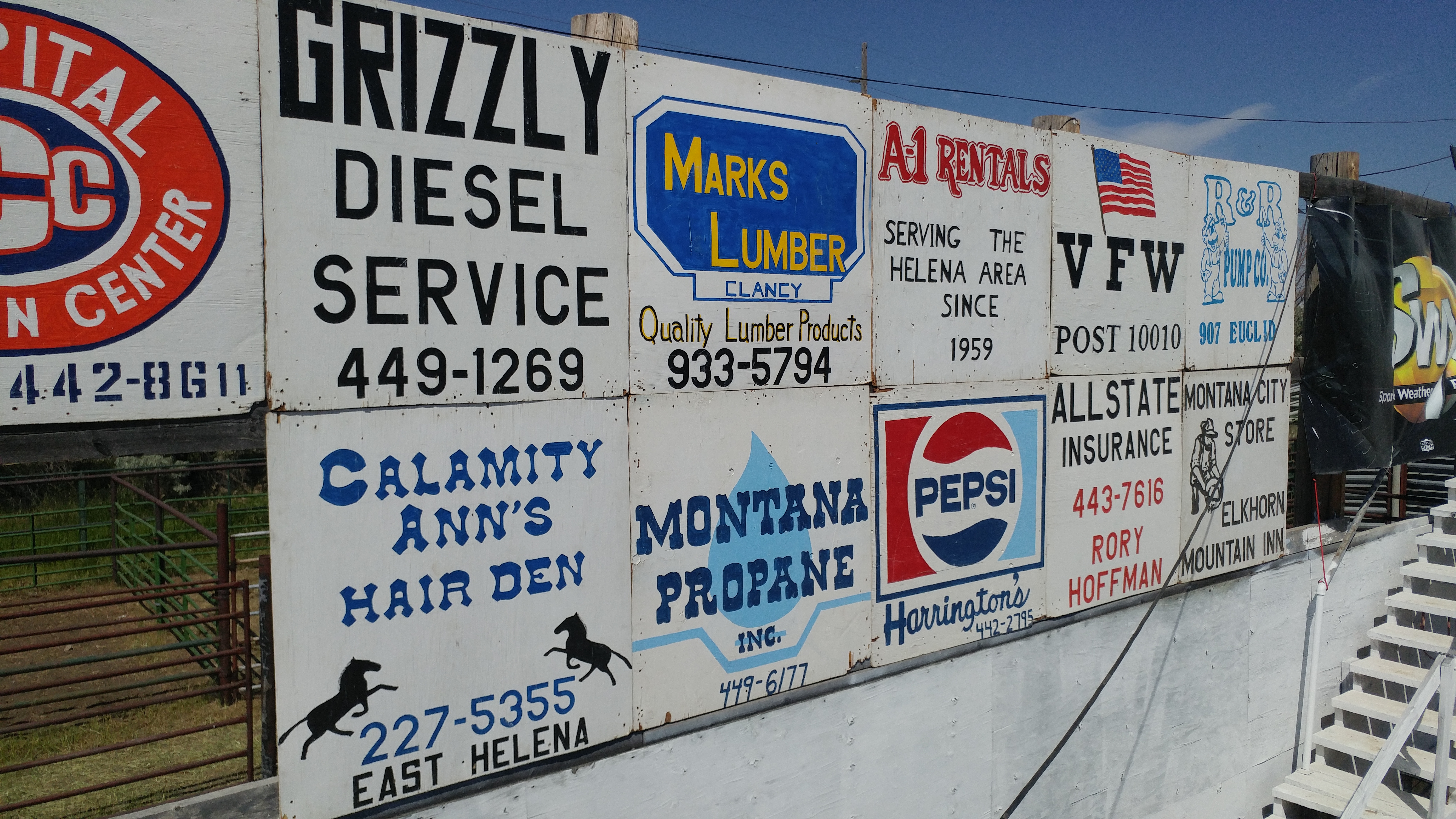 Montana didn’t always have a population so dominated by whites that Nazis considered it fertile ground for their ethnostate. It didn’t have any whites at all until French Canadian fur trappers showed up in the 18th century, followed by Lewis and Clark, whose trail brought the white soldiers and colonists who over the next century ethnically cleansed the indigenous tribes here until Montana got the demographics we see today.

While the game’s overabundance of African Americans is curious, it’s the game's near total absence of Native Americans that’s most shocking. There are eight indigenous nations in Montana, including the Flathead Nation, a confederation of the Salish, Kootenai and Pend d'Oreille tribes in northwest Montana precisely where Ubisoft set their game.

The elephant in the room during any discussion of Montana’s fascist problem is that the state was founded on genocidal white supremacy, and Native Americans, the largest racial minority in the state, still bear the brunt of racism in Montana. It’s worth noting that a lawsuit by a Native American family assaulted by the Aryan Nations is what eventually bankrupted the organization, whose compound was awarded to the family, burned down, and paved over with a peace park. 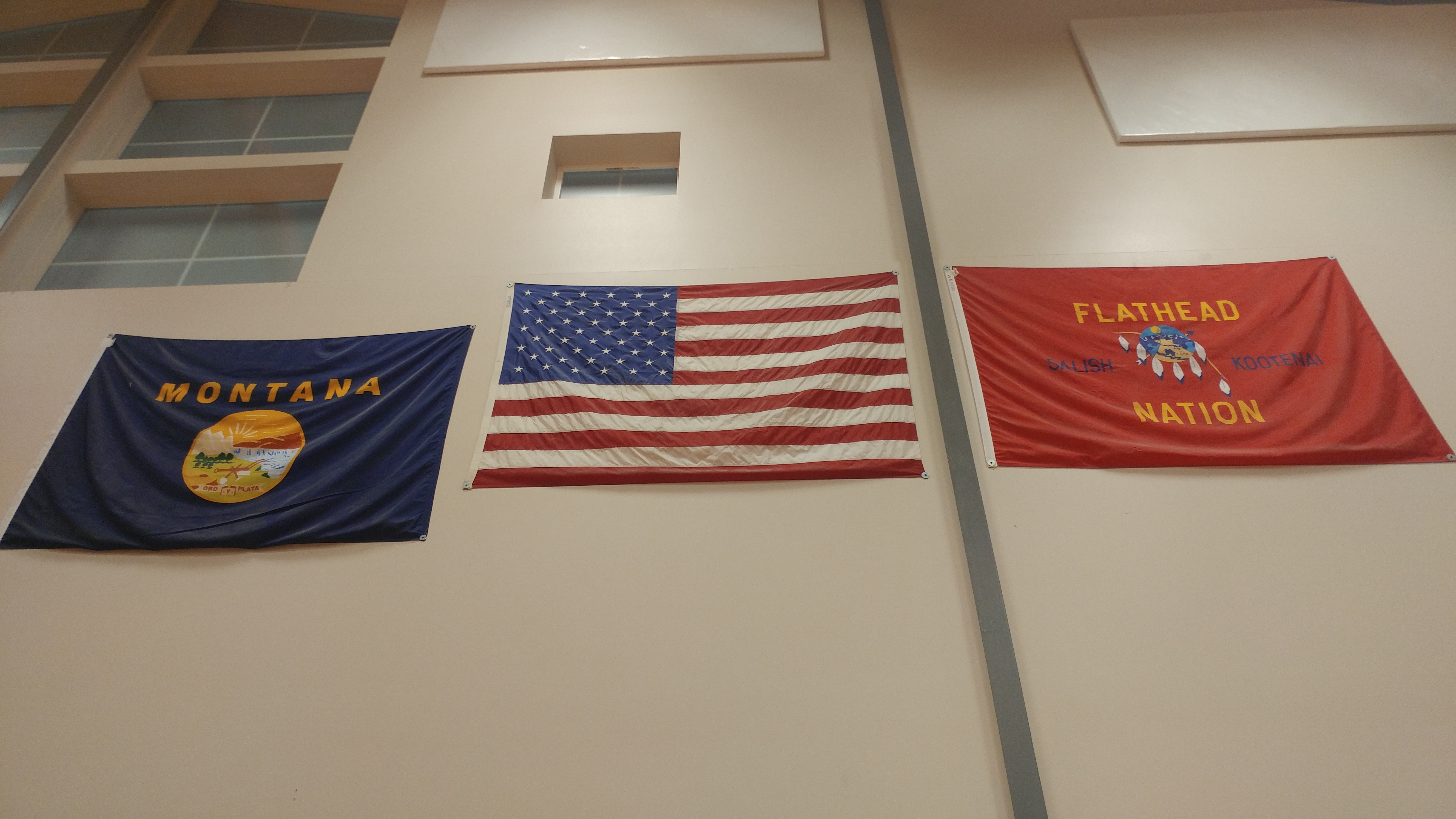 The extent of Far Cry 5’s inclusion of Native Americans is a guy with braids in an otherwise white anti-government militia (which are traditionally anti-Native) and a racist Boy Scout camp featuring totem poles from Northwest Coast tribes 400 miles away. The real victims of white supremacist Christianity are erased, and many of the “anti-fascists” in Far Cry 5 seem far too ideologically similar to Eden’s Gate to be opposing them.

It was weird to see Ubisoft valorize far-right politicians and militias as their heroes considering all the options they had. Want a politician that realistically opposes fascism? How about a socialist legislator from the Crow Nation. Need an example of a militia that would actually oppose white supremacists? Try the American Indian Movement.
It’s worth comparing Far Cry 5’s failed critique of fascism in the Trump era to Wolfenstein II: The New Colossus’ quite good one. The difference comes down to characters.

It’s not a high bar to hurdle, but Wolfenstein’s writers smartly realised that anti-fascists are anti-fascists out of the practical necessity of survival, not as a plot convenience. The protagonists of Wolfenstein are Jews, African Americans, communists, feminists, gays and the mentally and physically disabled. I know people in northwest Montana who fit those categories, but there’s no attempt in Far Cry 5 to portray their victimhood. 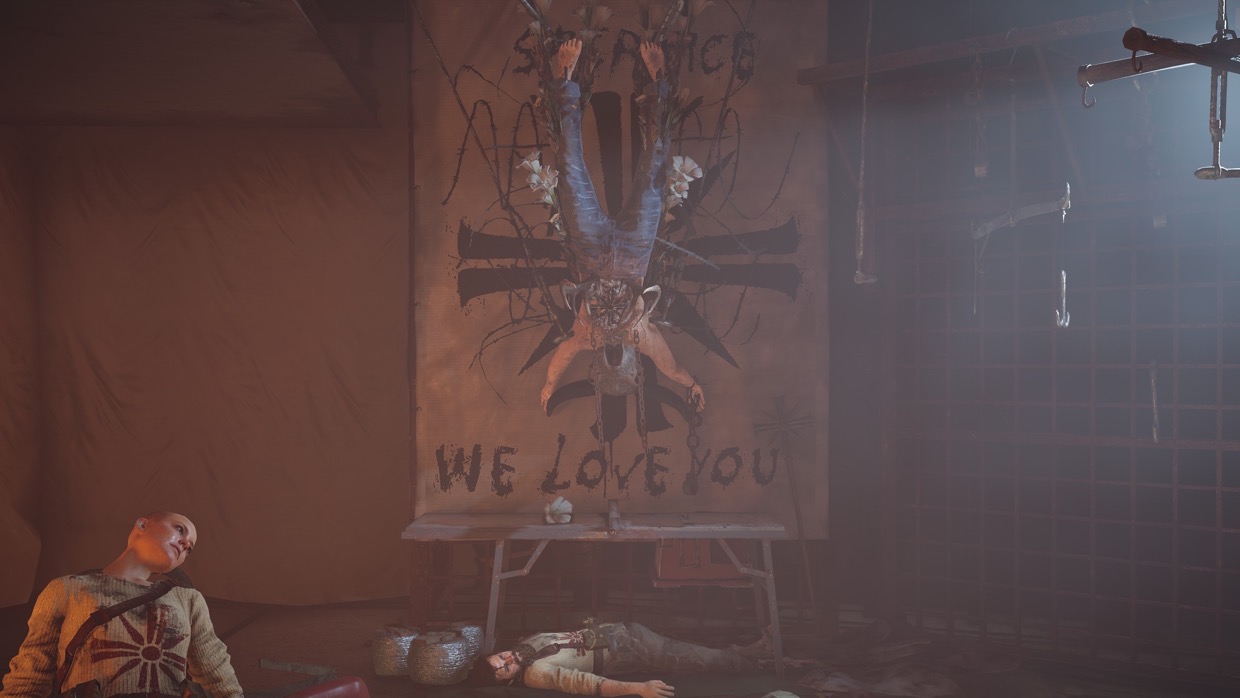 Because Ubisoft’s fascists aren’t written as the bigots that all fascists are, their crimes are distractingly colourblind. None of the cultists are racist to the handful of named people of colour in Far Cry, and I never found a single reference to the fact that any of those characters were non-white.

Note to developers critiquing fascism: swap around all the character models in the game. Does any of the dialogue seem suddenly out of place? Like a Native American character calling a Jew the n-word? If not, tell your writers to try again. Players are right to ask for more diversity in games but when its superficial to the point of breaking immersion through implausibly cheery race relations between fascists and their victims, that’s not progress.

Far Cry’s writers created fascists who follow through with the violence inherent to their genocidal ideology with a sort of paradoxical political correctness. This is not to say there aren’t politically correct fascists in Montana. Taylor Rose, a kid from Columbia Falls (Fall’s End?) was closely involved with the early alt-right, but managed to get multiple jobs with Montana Republicans, and later campaign endorsements for a failed 2016 state house run by masking his white nationalism with dog whistle terms like “western civilization.” (One of those campaign endorsements was from Ryan Zinke, a retired Navy SEAL commander who Montanans elected in 2016 as their sole congressman. He was quickly named Trump’s Secretary of the Interior and resigned on December 15 after more than a dozen ethics investigations, none of which concerned Rose.) 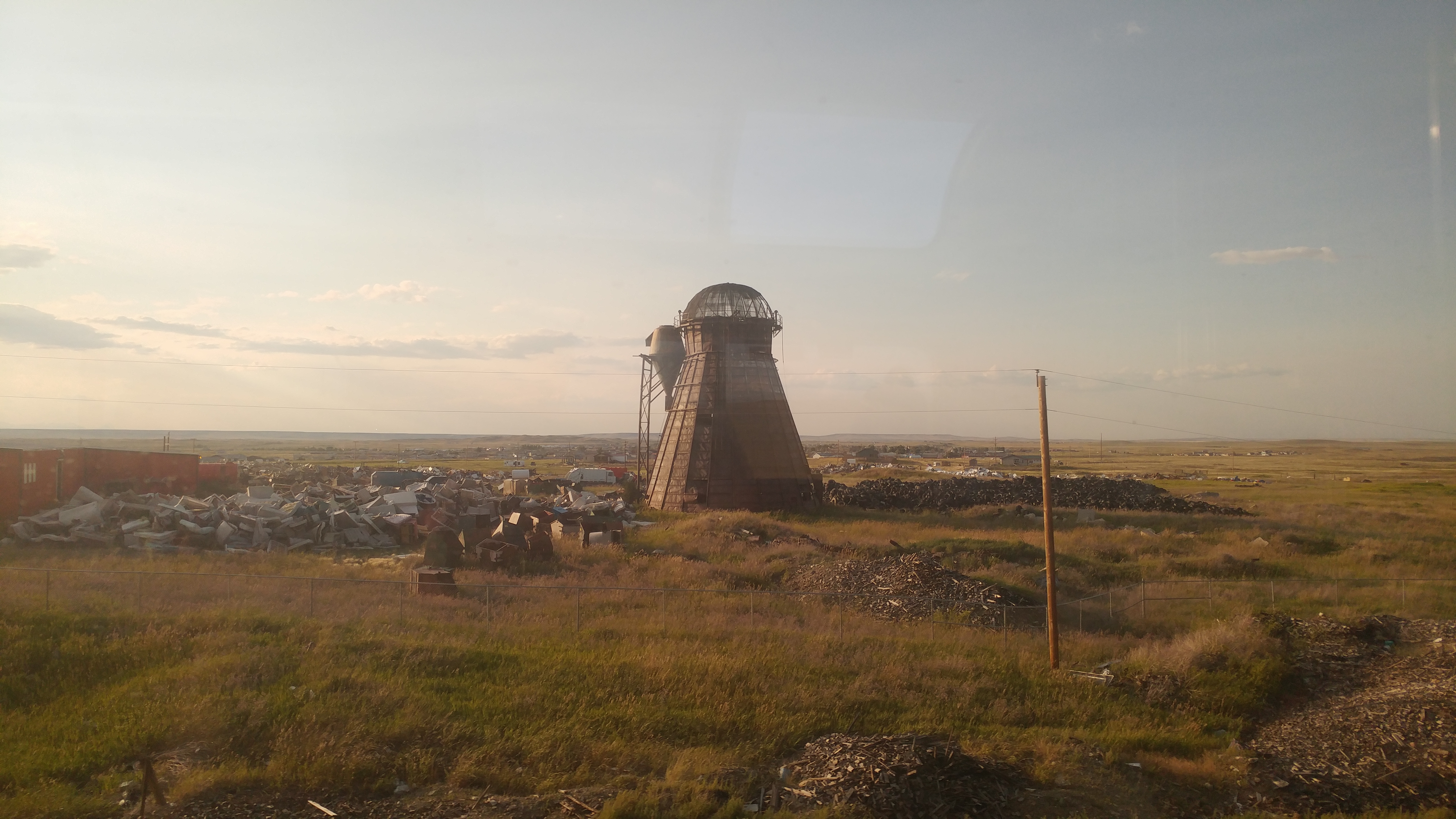 But Ubisoft isn’t commenting on how Montanans attraction to alt-lite rhetoric betrays the racist foundation of the state. Far Cry 5 could have shown that white supremacy didn’t jump from the compound to the legislature, but that Montana and the United States wouldn’t exist without it.

At every opportunity, Far Cry 5 masks the origins of fascism in Montana, removing its roots in colonialism and Christianity, its links to mainstream politics, and its historical and contemporary victims. In doing so, Ubisoft promotes the myth that the brutality of fascism is un-American and alien to Montana’s history.

Maybe that’s a tall order, but I at least didn’t expect Ubisoft to end the game by declaring the fascists were right all along and nuking every Montanan but the cult leader. The recent announcement of Far Cry New Dawn makes me suspect Far Cry 5’s crap writing was always just intended as an on-ramp to the post-apocalyptic setting that’s made so much money for others lately. 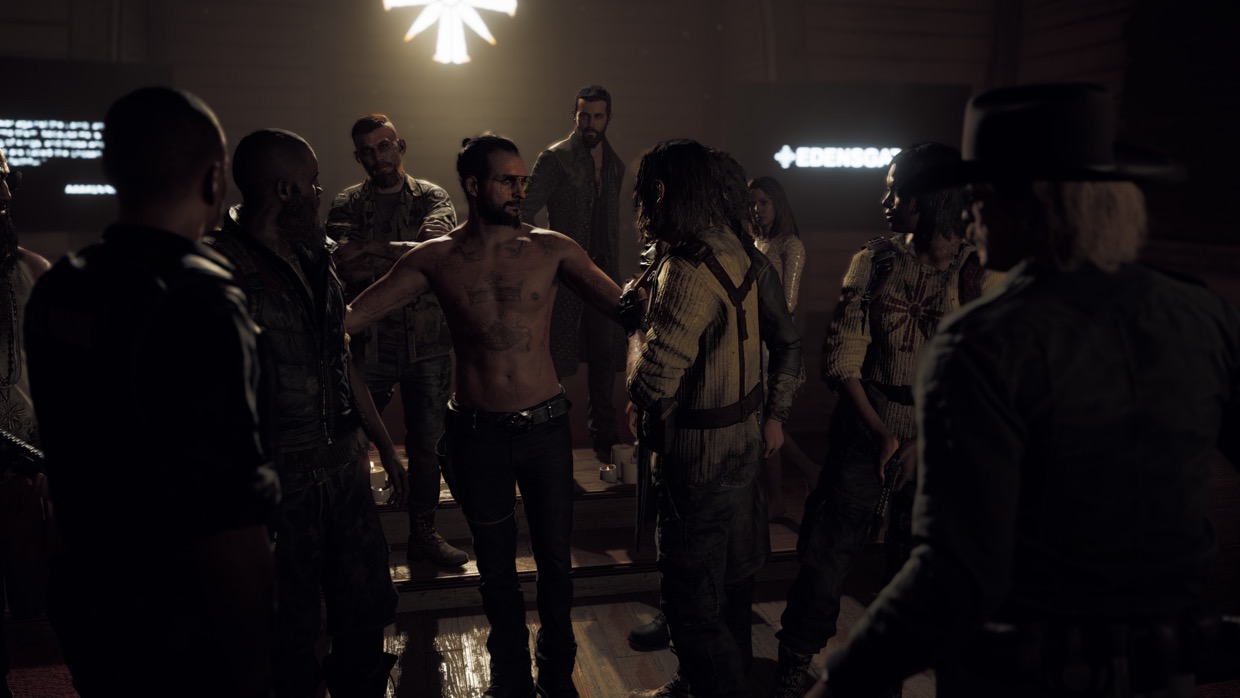 Want to set up a post-apocalyptic sequel for your critique of fascism in Montana? This is just off the top of my head, but you could play up the anti-civilisation, right-wing anarchist beliefs of the Unabomber Ted Kaczynski, whose famous cabin was around the area Far Cry 5 takes place. Make your villains radical environmentalists trying to start nuclear Armageddon. Far Cry 5’s Richard “Dutch” Roosevelt seems clearly modelled on the Montana naturalist Doug Peacock, who also served as the inspiration behind Edward Abbey’s Monkey Wrench Gang. Take Murray Bookchin’s critique of Abbey’s “eco-fascism” and run with it. Get into the weeds of deep ecology. Make the protagonists up-gunned Native water protectors.

But Ubisoft didn’t have to do something too new like that, a simple acknowledgement of reality would have sufficed.

There’s been a notable uptick in fascist activity in Montana since 2016. In 2017, a Jewish family was subjected to an anti-Semitic trollstorm by the neo-Nazi blog the Daily Stormer after standing up to alt-right leader Richard Spencer.

When Montana’s congressman Ryan Zinke became Secretary of the Interior, a special election was held to replace him in the House of Representatives. Another supporter of Taylor Rose, tech CEO and failed 2016 gubernatorial candidate Greg Gianforte, ran on the Republican ticket, and body slammed a Jewish journalist on election night, to the joy of the Daily Stormer. He won, and was recently re-elected, with the president pantomiming the assault on a midterm campaign visit to my town

Steve Bannon was scheduled to deliver a keynote speech at a tech conference here on Hanukkah until a boycott shut it down.

I can’t walk down the street in a yarmulke without someone calling me a kike from their truck.

Far Cry 5’s most realistic depiction of fascism in Montana is the ability to throw beer cans out the window of your truck at pedestrians. People around here do that too.

Photos of Montana by Hunter Pauli