Flash Point: Fire Rescue is the digital adaptation of a board game about rescuing people from buildings on fire. The basic premise is simple: a house is aflame. You command a squad of firemen and penetrate the place, trying to rescue as many survivors as possible before the building collapses. Big question marks randomly appear on the map. Some of them hide survivors, other are false alarms. Once you find a person, you need to drag them outside the building, possibly avoiding catching fire during the process. This faithful recreation got successfully funded on Fig last year, and now is here for us all to enjoy. Who is it for, though?

It has a single-player mode, but is better enjoyed with friends, so I kidnapped a flatmate and forced her to don the shiny garbs of a firefighter. She doesn’t usually play games, so she was a perfect specimen to test how accessible the game is.

The starting screen offered us two game modes: Family and Experienced. It feels a bit barebones at the moment, but the developers have promised to add more features from the board version, like new maps, new firemen and the possibility to tweak the rules as you wish. (I feel compelled to point out that the original board game features playable rescue dogs. This is very important.) 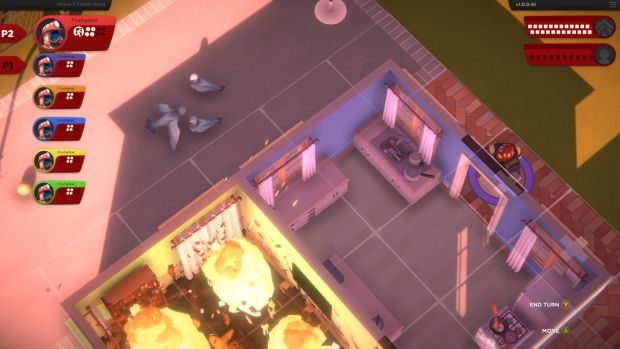 After selecting Family mode, we immediately found ourselves squinting at a dense wall of text. The tutorial is just a big instruction manual, and while it explains the game rules, it doesn’t really explain how to play― the buttons to press, the way a turn works. It all feels abstract at first, and we only truly understood our situation after a confusing first playthrough.

The game plays like a collaborative strategy game: firemen move on a grid, and each unit has a pool of Action Points to spend every turn. Some actions (smashing a wall, dragging a survivor, putting out a fire) cost more than others (moving, closing doors, walking).

Every time a firefighter finishes their turn, a shiny spark of ember wanders the map, spawning a new puff of smoke in a random spot. Smoke becomes fire when next to another flame, and when too much fire fills the same room, it explodes. The house has a number of hit points, and after sustaining too much damage, it’s game over. 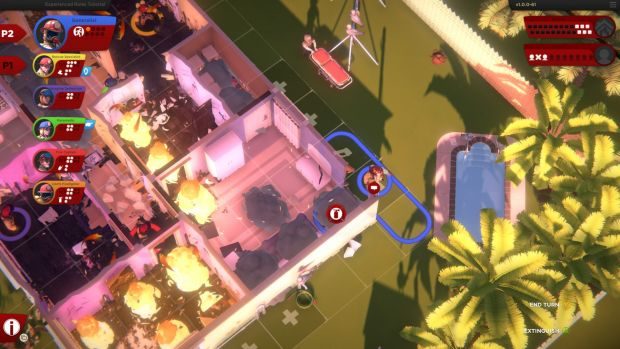 Even in its most basic state, Flash Point can be overwhelming. The minimalistic UI doesn’t help: opaque symbols, scarce explanations, and icons all too small for my myopic eyes. For a game that begs to be played in company, Flash Point seems unsuited to be shown on a TV screen.

The lack of a “cancel action” button also feels needlessly cruel, especially when paired with extremely sensitive controls. Too many times we reached a survivor only to step over them and leave the room because we pressed the wrong button.

Once you get the hang of it, though, Flash Point becomes a joy to play. I like the way the controls work, fiddliness aside: every time you move, the game automatically selects your most probable action from a ring menu. Step near a fire, for example, and the game understands you probably want to extinguish it. Step near a door and you are ready to open it. I can only imagine how cumbersome to play the cardboard version is, considering the number of rules, but the turns on PC are snappy and a match never takes more than 30-40 minutes.

Once we overcame the initial confusion, my flatmate and I easily cleared the first maps. The fire never felt too threatening, often blocked behind closed doors while we focused on rescuing the civilians. We’re good at this, we thought. Let’s tackle Experienced mode, we are ready.

Folks, we were not ready. 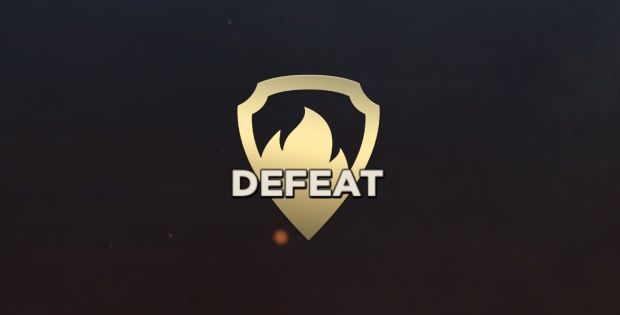 Experienced mode immediately throws at you an additional set of rules. First you get vehicles: a gurney where you must bring the survivors and a firetruck to douse the flames. Both can be moved around the map, and you can also use them to transport your crew.

Firemen now have specializations and special abilities, like the opportunity to heal survivors (dragging them around costs fewer APs) or the chance to dispose of hazardous materials. Have I talked about hazardous materials? If a spark falls on them, they go kaboom. There are also hot spots on the map that can make the fire propagate faster, and rules about when and how to utilize the firetruck, the possibility of swapping your crew, and…

Long story short: we died. A lot. This game is absolutely ruthless. 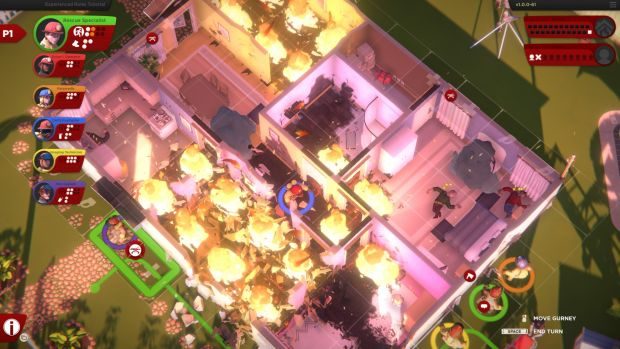 I fared slightly better playing alone, taking my time to mumble and reflect. Victory still eluded me most of the time, but I think I’m learning. My flatmate and I were playing the game all wrong: we focused on rescuing the survivors as quickly as possible, escaping from the flames instead of treating them as an enemy. You can’t really beat fire, but you can try to contain it. Keep it under control as you rush to grab some survivors in another room.

This game excels at portraying the catastrophic nature of a fire: a primaeval monster out of human control, prone to outburst and unexpected behaviours. That’s why failure doesn’t really feel frustrating, even as everything crumbles around you. The battle was never supposed to be fair. Horrible accidents are expected, and always greeted with a shrug and disheartened laugh. It’s a nice change of pace to the endless RPGs where fire is at your complete disposal, a fireball to throw at your enemies with a snap of your fingertips. 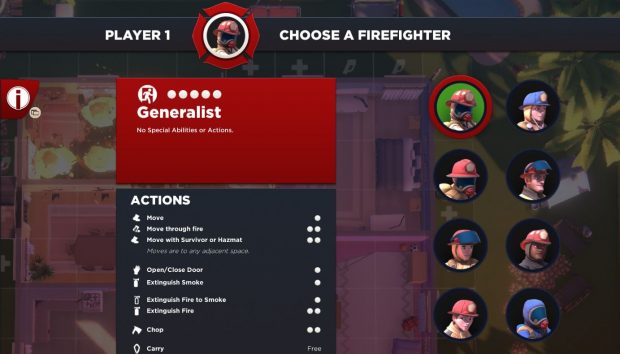 However, while I didn’t dislike my time with Flash Point, I couldn’t shake the feeling that it wasn’t really made for me. It surely wasn’t made for my flatmate, who spent most of her time being bossed around and feeling confused. This is a game that truly shines if all players are on the same page, throwing around suggestions and pondering strategies together.

If you’re looking for a simple co-op game to play with your family, Flash Point is not for you. But if you want to suffer with another strategy games enthusiast, or wish to play with a distant friend who loves the board game (online multiplayer is coming soon), then Flash Point will probably give you many hours of painful joy.