A rainy lunchtime saw me shun my nature walk for a trip through the Gifs of Games Being Worked On thread of the TIGSource forum. I've collated favourites below so you can take a peek too!

This one isn't actually from the thread but I found it while looking at a walljumping sprite gif for the same game by forum user, muki. Here's the walljumping so you can see that side of the game idea too:

This next one is by a user by the name of Carrion from a game currently known only as Project0v0:

The art style is so ace - a kind of organic shabby whimsical pixelation! This Garden Sentinel character with a companion walking bush from the designer's tumblr is great! 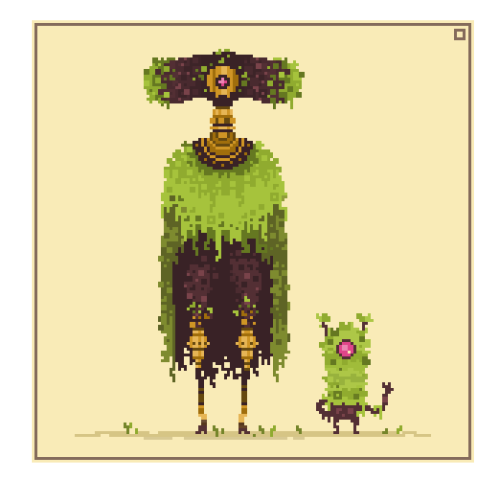 This is a particle experiment by AaronB which made me think of firework displays and sparklers and neurons firing!

The gif led me to Aaron's Particle Space which is a pay-what-you-want alpha project over on itch.io which looks cool as a toybox/sandbox to play around in!

This one goes in the opposite graphical direction (in my reckoning, anyway!) - it's an ASCII art RPG called Stone Story - official thread here - with some really evocative backgrounds:

Sean Noonan's Jack B Nimble is out on mobile now, I think, but on PC it's a Steam Greenlight thing which is in that stage between being Greenlit and being released on the store.

If you've seen any good gifs do feel free to link them below! I'm behind on my internet trawling and I haven't even had a chance to go through the last two Screenshot Saturdays on Twitter!