The PC remaster of Halo 3 is another beautiful, robust polish job that shows just how well Bungie’s bombastic shooter series has aged. I recommend it heartily. Yes, it’s marred with some baffling narrative choices, bungled ally AI, and a few instances of phoned-in level design, of course. But then, in the immortal words of that astronaut meme, “always has been”. And at this point, the whole Halo experience is so firmly bound up in nostalgia, at least for me, that its flaws have long since become endearing quirks.

But as much as this is a good moment to talk about Halo 3, what with it being out today and all, I’ve realised this post is just as much about the Master Chief Collection, the compilation/launcher… thing which now contains the whole of the classic Halo trilogy, plus Reach. I’d assumed the MCC was basically an electric version of a cardboard box with games in it. But now my four favourite Haloes are in it, the MCC seems to have reached a critical mass, and I’ve had something of a revelation.

The thing that gave me the realisation was the MCC’s playlist system. Playlists collect together levels that do a certain sort of thing - like massive set piece battles or vehicle segments - and let you do a playthrough of just those. Currently they’re preset by the MCC, and only draw from the levels of individual games. But there’s a greyed-out option on the menu for cross-game playlists, and I hope this’ll mean the ability to customise your own thrillrides through your favourite bits of the whole series.

And yes, I know playlists apply to multiplayer too. But for the purposes of this post, I’m talking purely about Halo campaigns, whether played through alone or in co-op. I’m well aware that the Chief’s third big day out is broadly considered the pinnacle of the series in terms of multiplayer. But it’s just not the element of the game that appeals to me, so I’d be waffling on about it just to tick a box.

Nice to see a familiar face 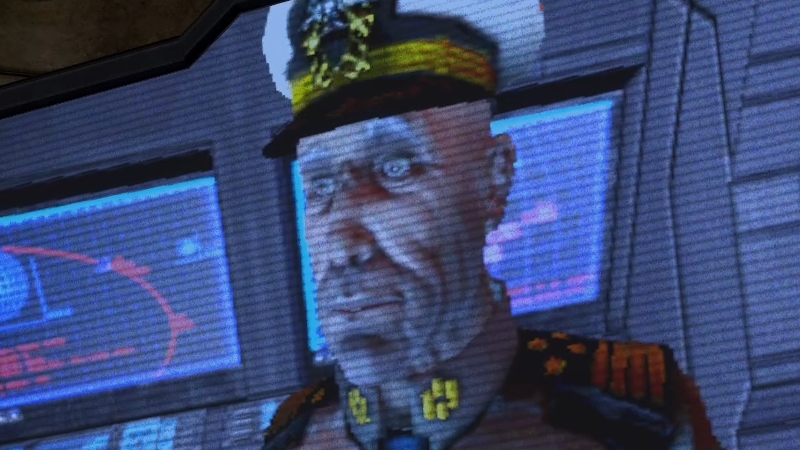 I'm not a big "graphics" lad, but I appreciate that Halo 3 looks as pretty as the other remasters - the scarab explosions are of a particularly pleasing intensity, and all the original's odd, high-end ugliness has been smoothed out with the application of a bit of modernity. Still, people's faces look... disconcerting. Sarge, in particular, has eyebrows like dead bats and looks like a Black Michael Keaton playing a minor demon, while Lord Hood exists somewhere in the space between Til from Rammstein and the Churchill Insurance bulldog, and seems to have been sculpted from a wet feather pillow.

What the playlists made me realise, and what I possibly should have realised long ago, is that it’s silly to think of the Halo series, or at least the original trilogy, as individual games. They’re all just one big game, where the buttons change slightly between some levels, but where the pacing, tone and general fight-feel remains remarkably consistent. Now that they all look consistent too, with their updated visuals, it’s hard to escape this lovely fact.

As evidence: a while back, me and my friend Josh (who I convinced to write for us in praise of Halo: Reach) ended up in a protracted befuddlement, trying to remember a particular level we’d struggled on for ages during a legendary co-op run, and where we’d become genuinely enraged with Sergeant Johnson’s repeated false promised to “cover us” as we were annihilated by Davy-Jones-Looking floodboys. I forget where we tracked it down in the end, but the point was, there was barely anything about our memory of the level that tied it to a particular game.

Hammering the point home further was my observation, upon playing through Halo 3’s campaign yesterday, that I had in fact never experienced the first half of it before, but had failed to notice this for thirteen years.

Usually, you see, Josh and I pull an all-nighter to co-op our way through every new Halo release on launch, and in the years since Halo 3 came out, we’ve played its big, later set piece levels loads together. But on the day it launched in 2007, I was staying on an internet stranger’s sofa in Texas, because I’d gone there to see some bats, and so the usual ritual was impossible.

Luck had favoured me, however. My host - a warm, hospitable man with a lovely family - lived next door to his brother, who came over for lunch and happened to mention that he was having “The Boys” round to play Halo 3 that night. My eyes lit up, we got talking, and I was invited round with some enthusiasm.

It would turn out to be quite an evening, as while my host was a wholesome and measured man, his brother was a riot. Once The Boys had arrived and the Xbox had been switched on, I was offered the controller (as a weird, bat-searching englishman, I was a sort of novelty), and invited to kick things off. Before the opening cutscene had finished, however, the wild brother produced a bong like an artillery piece, and - with my enthusiastic consent - held it to my lips like some kind of devilish butler as I played.

The last thing I remember of Halo 3’s first half, then, is the very start of the first level, where the Arbiter pronounces that “the Brutes have our scent” in a rich, sombre hit of pure Keith David. To this, Sarge replies that said Brutes “must love the smell of green”. He was referring, of course, to the Chief. But since I had just wolfed down a chestful of the strongest weed I have ever experienced, it did seem rather like he was roaring it directly to camera, with a theatrical stoner’s wink.

What happened after that, I have no idea. In fact, I’d forgotten the whole experience until yesterday, when fragments of it came back to me from the shattered strata of that night’s memories. Ah, yes! I’m slaughtering gorillas, with a hammer, in a sewage treatment plant. Now I am in an underground military base, where the Arbiter is preaching fruitlessly to some bee men (what a guy). Now the gorillas have motorcycles. Of course they do.

It was all good stuff. But although it had been entirely wiped from my mind by the gravity hammer of a stranger’s ultradrugs, I had never registered its absence. Miss half of most games, and you’ll know it. But Halo’s meandering, simple-but-complicated story, and the endlessly repeated rhythms and motifs of its levels, mean that it can just as easily be considered as something continuous rather than discrete; a sort of big barrel of games liquid, from which you can happily pull yourself a pint without thinking about what part of the keg it comes from.

The Master Chief Collection, in that context, is a stroke of genius. Besides the playlists, it lets you play any section of any level from any game currently in the compilation, chopping between them with only the briefest of detours through menus. It’s a barman, essentially, to attend that barrel from the metaphor above. Or a tearaway brother, holding a massive bong full of Chief for you, as you lean back with your controller in hand.

Yes, of course the games have their own internal pacing, and a beginning-to-end playthrough is still a worthwhile pursuit. But with the exception of Reach (which has a tight, contained narrative that I actually really like), the overarcing story is a lovely old mess. Its strength is very much in its sense of atmosphere and worldbuilding, rather than in its chronology.

Chief comes and goes as needed, like King Arthur in a motocross helmet. Haloes appear, and are dealt with. Mysterious alien facilities are fought through, and exploded. Grunts gibber, Brutes roar, and marines haplessly drive your warthog into cliffsides. Stirring, melancholy swells of music arise time and time again, setting slightly different orchestrations to slightly different firefights, and the galaxy is saved, again and again and again. Despite his best efforts to fulfill Halo 3's tagline, Master Chief will never truly be able to finish the fight.