I died fifty times before I felt the hand of god.

Trapped on an unbearably hot world in No Man’s Sky’s survival mode, I died to the teeth of a stubby legged Tyrannosaur. I died to a roving band of sentinel robots, upset that I dared to plunder their planet for ore and isotopes. I died during blazing storms, the already extreme temperature ratcheting up to 300 degrees celsius, and cooking me alive in my space suit. Most often, I simply died from exposure as my suit’s life support drained away and left me without any oxygen to breathe.

My ship offered a tantalising escape from the death world, but a series of cascading dependencies put its functions out of reach. I couldn’t take off without Plutonium, but I didn’t have enough residual life support left to go hunting for Plutonium. I could recharge my life support with Thamium9, but repeat deaths had rendered my scanner inoperable, meaning I couldn’t locate the sources of Thamium9 before burning to death. I could repair my scanner with Carbon, but the twisted, alien trees that served as the primo source of Carbon in the area were guarded by nine-foot insect dinosaurs and angry floating robots.

After two hours of failed refuelling runs, and almost resigned to my fate, I climbed into my ship’s cockpit and sat there. The ship had climate control, air scrubbers, and a safe view of the barren world outside. But without the minerals needed to engage its jump jets and get me off the planet, sitting behind the glass was prolonging the inevitable. I thought through my plan: a wild scamper to hoover up the necessary resources before my suit failed and I died again. I steeled myself and reloaded one of my two saves — only to find I was already in the air, floating slowly next to the abandoned base I’d used as a shelter against the elements. It was like I’d been flicked off the ground by some deity that had taken pity on me, and had allowed me to slip the surly bonds of gravity without paying the price in Plutonium or blood. 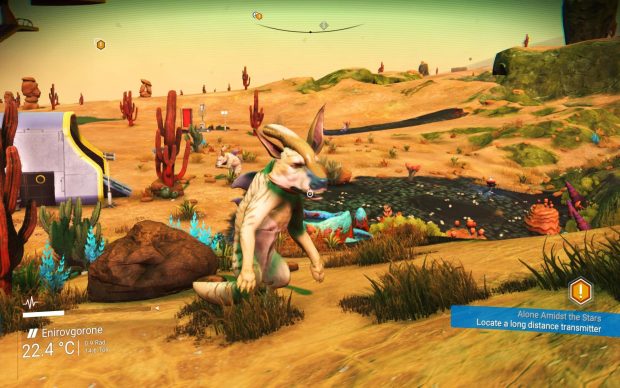 These situations are common in the early stages of No Man’s Sky survival mode. An apparently simple plan quickly expands to involve several subtasks, balancing the need for short-term necessities like Thamium9 against the hunt for rarer or more valuable minerals to build for the future. On my first survival playthrough, even the act of reaching my ship took me an hour and ten deaths, as toxic rainstorms and aggressive local fauna chipped away at my suit’s defenses. To put it another way, starting No Man’s Sky in survival mode is like being that water-wheel robot from Futurama, consistently 30 seconds from death and irrecoverably burdened with that knowledge.

Living through this period, I found things got a little easier. Stockpiles of Plutonium and Thamium9 meant I could cope with a bad landing or two on a dangerous planet without making it my grave. It’s certainly not a permanent shift, though, and even after tens of hours of game time, I found it all too easy to scupper myself. Worlds that look like paradises from the air — jewels of green and red and blue — can reveal themselves as radiation-blasted hellscapes or storm-ravaged ice tombs when your space boots hit the ground.

The decision to set down can very easily become your last when the cost of takeoff is extortionate. It takes 200 Plutonium to fill your chosen ship’s launch booster fully, but each outcropping of the fairly rare red rock tends to provide less than half of that. Some worlds are particularly stingy with the Plutonium, too, forcing players to trudge out into the lethal wilds in the hope of finding five or six distinct deposits to earn their passage off-planet. 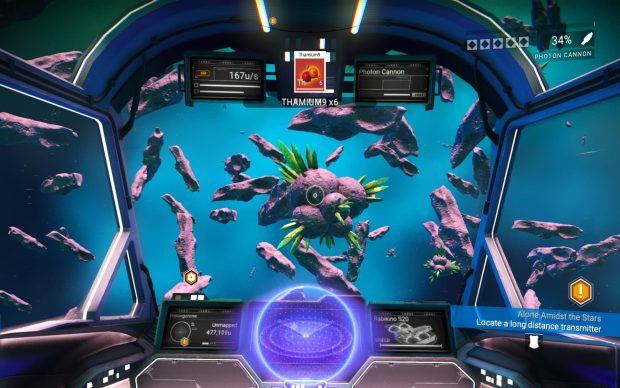 Perhaps I'd been launched into the air by a bug — I encountered a few during my return with the game — or perhaps it was Atlas who'd chosen to lift me to the heavens. No Man’s Sky’s mysterious cosmic entity was included in the vanilla version of the game at its release in 2016, serving as the centrepiece in a very lightly sketched story, but has taken a more central role in the game’s patches since. The Atlas Rises update, released for free in August last year, fleshes out that story, giving Atlas a motivation, an endgame, and something close to a physical form.

Should the player choose to follow the new questline introduced in the Atlas Rises update, they’ll also find some answers as to their own background, as well as more information about the galaxy they’ve woken up in. The so-called “Artemis Path” still involves its share of grinding busywork, but the missions included within are definitely more engaging than the vanilla game’s central story — a flimsy set of fetch quests that emphasised just how empty and pointless No Man’s Sky could feel. 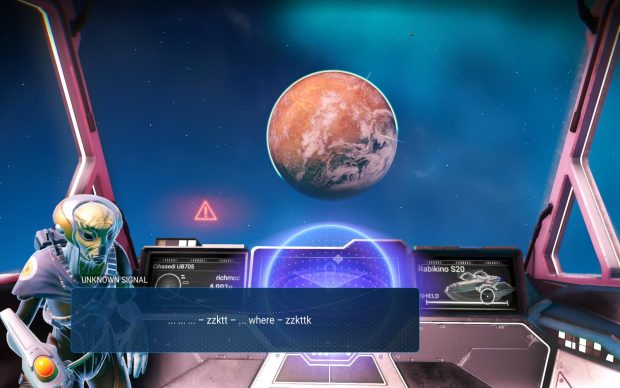 Also included in the latest update is a mission board: a varying collection of one-off requests to complete odd jobs like delivering cargo, hunting pirates, and murdering local wildlife. These sidequests provide an additional structural framework, as well as paying out in some snazzy rewards, but don’t do particularly well at making the galaxy feel alive. Star systems can be lightyears apart, but job postings are largely the same, the game’s wildly varying species always looking for something as mundane as interstellar pest control or space Parcelforce.

In No Man’s Sky’s standard mode, the rewards these grind-them-out jobs can bring will gee you along the revamped story. Playing on survival mode, however, I ended up ignoring most of the jobs I could’ve taken on, judging that the reward wouldn’t be worth the cost in Plutonium, Thamium9, and other resources that I’d need to burn to complete them. Not that they were completely useless to me, though: by picking up courier quests, I discovered I could simply sell the item I was tasked with trafficking, earning quick cash I could spend on buying new resources and unlocking cargo slots in my stolen ship.

Similarly tricky for survival players to justify is building one of No Man’s Sky’s home bases — a feature introduced in 2016’s Foundation update. Or, more accurately, expanding a base, adding new rooms, hallways, and storeys to an existing structure that players can colonise. Finding a habitable structure took me some time, and even then, I only had the resources to add an extra corridor and a single room before I’d blown my entire renovation budget and realised I had to get back to the difficult business of staying alive. 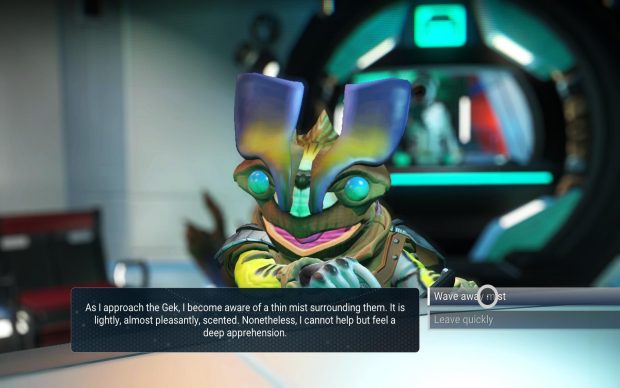 No Man’s Sky’s creative mode is a better home for grand base designs — as it is for playing with the game’s new terrain deformation feature. Certain multi-tools come with a secondary function that can raise or lower the land around them. Its usefulness to storyline-following players likely won’t be high, but it does turn No Man’s Sky into a gloopy approximation of Minecraft, and allowed me to raise a giant muddy edifice of a kitty cat in radioactive soil — a plus point.

An approximation of Minecraft is still only an approximation of Minecraft, though, and this highlights the problem with No Man’s Sky in 2018. 18 months of updates have unquestionably fleshed the game out, made its galaxy feel less lonely, more designed, and not as flat-out meaningless as it was at launch. But No Man’s Sky is still not sure what it’s for, now that the power, punch, and promise of an infinite universe was revealed to be something of a parlour trick during its infamous launch. Getting lost amongst its infinite stars is far more enjoyable than it was at launch, but after three significant updates, No Man’s Sky still feels too limited as a creative sandbox, too empty as a story-centric RPG, and too punishing as a survival game.

Disclosure: RPS's own Alec Meer wrote a little for No Man's Sky.