I love shooting zombies in the face in Left 4 Dead, and I love uncovering the histories of characters through stories like Gone Home. I’m also a big fan of seeing different versions of the end of the world.

As such, while Hope; Or How We Survived doesn't look like either Left4Dead or Gone Home, it still felt like it'd be a bit of a box-ticker for me, given that it seemed to share some thematic similarities. And it certainly did tick boxes, in the end - just not the ones I was expecting. It's actually a game about making friends, and I dig it.

Hope puts you in the shoes of a tower guard during a zombie apocalypse. You’re there to keep watch, and make sure your zombie-free camp stays that way. You are, to start with, a nameless nobody on their lonesome, equipped with a red trenchcoat, a massive hat, and a rifle. Standard guard stuff.

You’re soon joined by a chatty companion, however, who is running for their life after losing their pal Dave, and is determined to convince you that they’ve not been bitten - just injured. You're not taking any chances, though. After giving them a pill that'll make them immune to becoming a zombie, you tell them they need to wait seven days to be sure it's worked - so they get comfy at the base of your tower.

As time goes by, you and your yellow-coat-wearing buddy strike up conversations to help the days, and the evenings, go by. These conversations are built from classic three-option dialogue choices - the kind that offer you vague descriptions of what could actually come out of your mouth, rather than verbatim statements. Every choice I made led to relatively cute, mundane conversations about their favourite films, videogames, and snacks, so the stakes aren't terribly high. It's all very smileworthy, and believable as exactly the kind of thing you’d talk about with a stranger you were forced to spend time with.

Frequently chuckle-prompting though the dialogue is, it’s delivered in a painfully slow fashion. All the characters speak with the urgency of dripping syrup, and even if you speed it up in settings, it doesn’t speed up the conversation itself, just how fast the text appears. Despite the slow-burn story, however, I did want to make it all the way to the end. I didn’t, mind you, but not because of this pace of the dialogue. 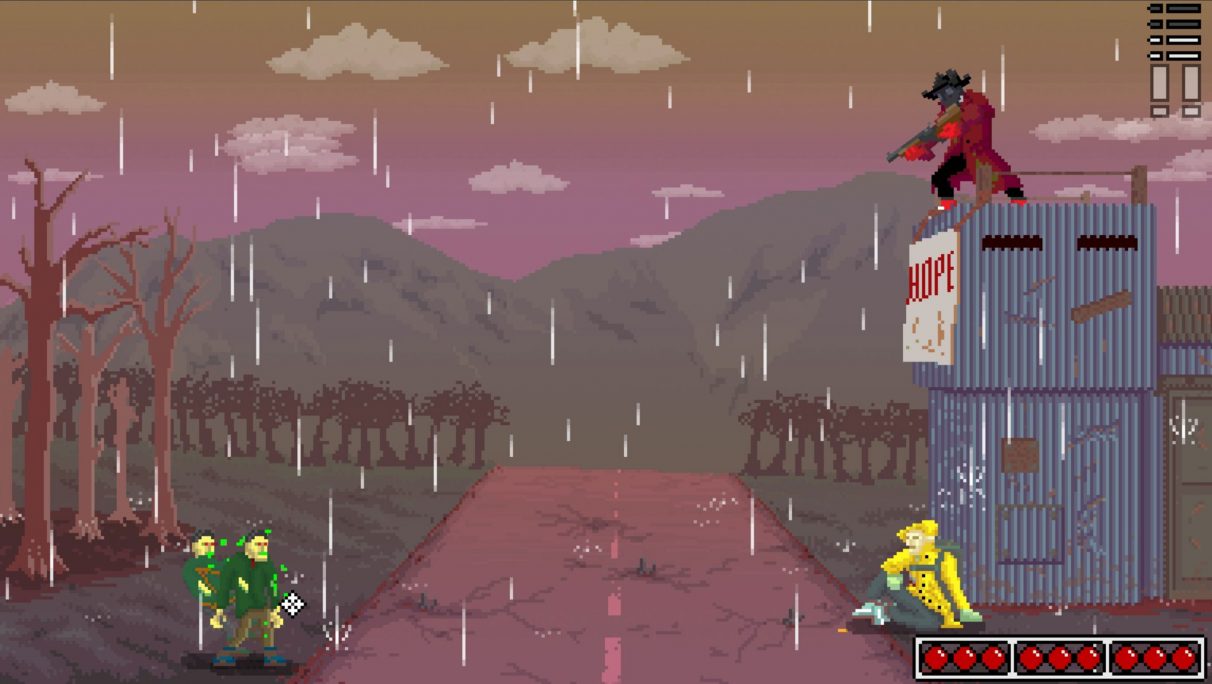 I didn't finish the game because - guess what? - the zombies killed me! Bet you'd almost forgotten about them, eh? Well, the game doesn't. Sooner or later, they show up to gnaw on your yellow-coated friend, and it's up to you to protect them with your rifle. Later you get access to a shotgun and a pistol, too. The shooty bits are of course the most exciting part of the game by far, as you splat the zombs in different appendages, and they also get pretty stressful at times.

As well as regular zombies, you see, there are zombie birds, both flying oens and clucking, ground-based ex-chickens. If the flying ones reach your face, you have to spend time swatting them away, leaving your pal on the ground vulnerable. It was the birds that were my downfall, as, while they distracted me, my mate was left to a slow and painful death at the hands of the walking dead.

You'd think it would be quite hard for ol' yellowcoat to die, seeing as they have a huge health bar that’s replenished every day. But somehow, I managed to let them down. They got et, making the whole title of the game a false promise for me.

But I'll give it another go. After all, even though my run was cut short, it seems like Hope will only take a couple of hours to complete. And while it didn't really do enough to quench my thirst for narrative games or zombie shooters, its meticulous yet casual dialogue managed to get me very invested in a friendship between two people who start with little in common save their distinctively coloured coats.