Fans of interactive fiction! IF Comp 2017 is currently in progress, with 79 entries — the largest field in the competition's more-than-20-year history.

The selection includes parser, choice, and hypertext stories, a PDF gamebook, a joke game from the perspective of the grues, two parser games of Viking-era menace, three branching narratives translated from Chinese, and a game where part of the intended play experience is to read the source code.

If you feel overwhelmed by all that bounty, here are a few standouts: 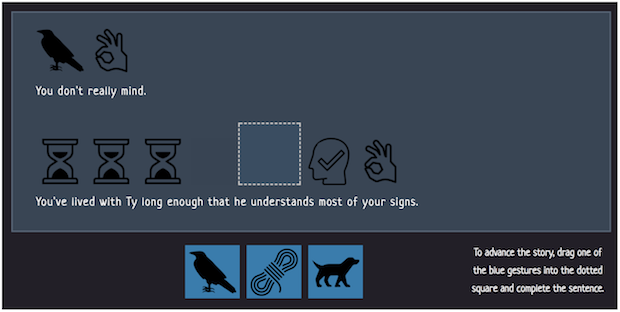 10pm (litrouke) is a vignette from the life of Bird, a 12-year-old boy who's given up speaking and has taken to communicating in symbols. He's living with Ty, a protector who doesn't seem to be a family member or even a legal guardian. It's not clear how this came about. What we do know: Bird worries about how long he'll have Ty's love and support, and is invested in questions of loyalty, safety, and permanence.

To interact, the player drags one or several pictograms into play to express what Bird will say next. This isn't as free as it might sound — you're not allowed to mix pictograms from a big palette, only to select from a couple currently available. But it's an unusual play style, and reflects the IF community's recent exploration of new user interfaces.

The use of icons is fundamental to what's going on in the protagonist's head. Bird doesn't think in adult or nuanced terms, and doesn't understand everything Ty is doing. Ty's relationship with his girlfriend, for instance, appears to be at least somewhat open. Bird doesn't know how to ask about that except in simplistic forms: broken heart? broken family?

Fundamentally this is a story about a traumatized kid's need for big, straightforward promises — I will always love you, I will always protect you — and his guardian's adult awareness that those simplifications don't work in the real world. 10pm's interaction style puts that tension at the heart of the gameplay. 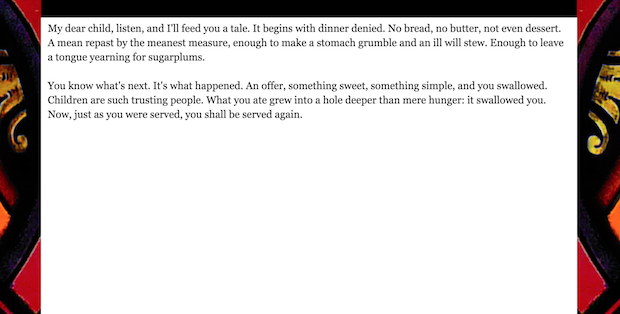 Eat Me (Chandler Groover) belongs to the newish genre of limited parser games. In this case, the gameplay is what it says on the tin: traverse a fantasy castle full of objects and people made of foodstuffs, then eat them.

There are puzzles here — you need to eat things in the right order, under the right circumstances. But the intense focus of the verb set on eating (plus a little navigation) means you'll never get stuck wondering if you forgot to look under something, or never guessed that the author would implement the verb RUB in this game.

The visual descriptions are lavish, baroque, sometimes grotesque. That's in line with a number of Groover's other pieces as well, especially The Queen's Menagerie and Down, the Serpent and the Sun.

Personally I started to feel a little glutted before Eat Me finished. But — like most of what Groover writes — it's a striking and memorable piece. 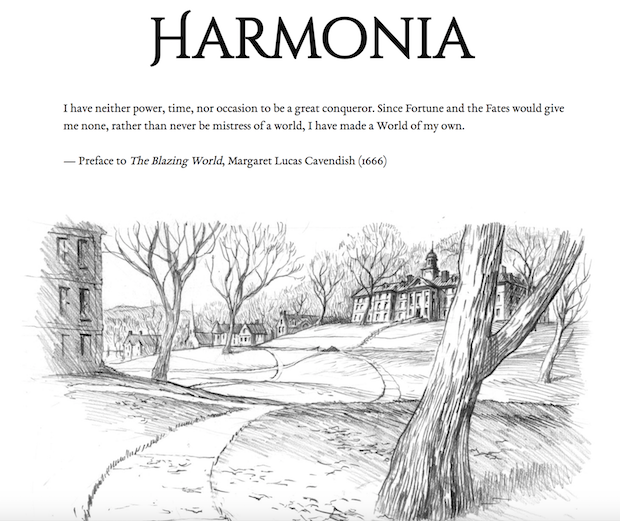 Harmonia (Liza Daly) is an occasionally-branched, novella-length story about a utopian community of the 19th century, and the women's college subsequently founded in the same location. You play as a visiting lecturer brought to substitute for a missing professor who apparently got in over his head.

Liza Daly wrote last year's psychic-detective story Stone Harbor — and like its predecessor, Harmonia is a visually beautiful piece of hypertext: gorgeous typography set off with carefully chosen drawings, marginalia in different fonts, hand annotation. If you've ever lusted after IF that gave more care to the presentation of words, this is for you: 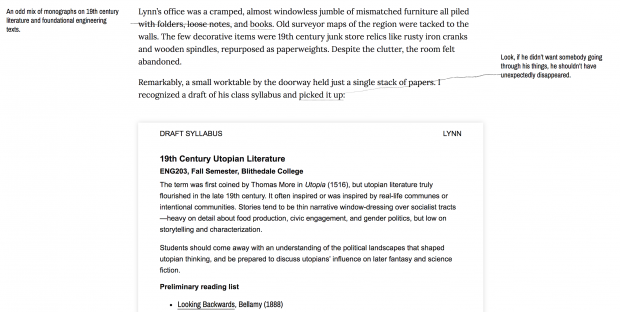 The emphasis on the physicality of texts plays into one of the game's core points. Harmonia is a game in part about research, and about the juxtaposition of current and historical beliefs and prejudices. It draws heavily on utopian literature of the 19th century to lay the groundwork for Harmonia's main plot.

All that might sound a bit static, and indeed almost all of that interaction is exploratory — almost, but not absolutely all. There are a handful of game-changing decisions to make. 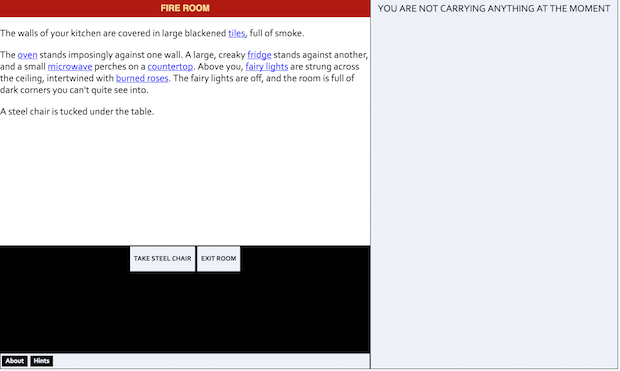 Domestic Elementalism (fireisnormal) is a cozy, charming puzzle game, offering a lot of gameplay appeal I associate with parsers — inventory, rooms to explore, locked doors to unlock — entirely through a link-based interface.

The premise: you, a skilled witch, return to your magical house to find that everything is out of kilter. Someone has meddled with the place while you were away, and you need to clean up. Your magic allows you to align items in the game world to different elements, which may change their material or shape.

There are enough objects to transform, and enough ways of using them, that it doesn't work to wander around trying everything on everything else: invention is required. In addition, the game offers more worldbuilding than strictly necessary for a piece like this. As you explore your house, you encounter a range of information about how magic is used and deployed, and cultural differences in how elementalism is even understood.

I could have wished for more graphical polish in the front end, but the actual puzzling kept me entertained and was just at the sweet spot length for a competition game.

Will Not Let Me Go (Stephen Granade) tells the story of a man with dementia. It uses the interaction to capture the protagonist's confusion; the way his thoughts sometimes get stuck and need to be coaxed back into motion; the recurring need to keep a lid on the anger he no longer finds easy to regulate.

This might sound depressing. It's true that the story is not precisely an upper. He loses professional credibility, loses important parts of his relationships to important people, loses his sense of himself. But it is told partly out of sequence, memories of the past interleaving with moments from the present, and the result ultimately is (at least to my mind) a more hopeful counterpoint — a reminder that something doesn't have to last Happily Ever After to have value, a statement about claiming joy in the face of mortality.

I also appreciated the southern setting of the story, which is comparatively uncommon in interactive fiction — or, if it turns up, it's often in a kind of southern Gothic mode. Granade lives in Alabama, and his story has a non-caricatured realism. He shows us the protagonist's involvement with his church; the weather, the shops, the landscape he lives in; the childhood racism, in recent years stuffed down under better manners and habits, that becomes overt again when his social filters break down. Part of the struggle of the protagonist's condition is that he's not always able to be the person he wants to be, the person he has tried to form himself into over all those passing years.

Granade is an old hand at IF — he had already been writing for some years before I turned up on the interactive fiction scene in the late 90s — and much of his work touches on childhood, family, community, and different characters' perspective on one another. Common Ground (1999) shows the same scenes from the perspective of several different family members, and Child's Play (2006) is a parser puzzle game that is also a jokey riff on what it's like to raise toddlers. Will Not Let Me Go carries forward some of the same themes — how do people understand each other, how do they adapt to each other in families and communities — but it's the work of a more mature and experienced storyteller.

Finally, a bonus recommendation, if you're the mood for something that's mostly puzzle and very little story: The Wand is a festival of combination color codes and quirky locks from Arthur DiBianca, author of Grandma Bethlinda's Variety Box a few years back.

You're welcome to help judge the competition between now and November 15. You need to play and rate five games for your ratings to be counted. This year, the competition overview page includes estimated playtime and content warnings. And this forum thread provides a breakdown of genre and structure, so if you're (say) looking for a science fiction parser game, you can find what's available.

Disclosures: Emily Short has met Paul O'Brian and Stephen Granade, as well as the author of Domestic Elementalism. She has worked on a shared project with Liza Daly.