You know the one. The game you were first obsessed by. The game you gushed about to extremely bored friends cornered in the soft play area.

For me, one of my earliest memories is playing Sierra’s 1988 pixelated wonderland, King’s Quest IV: The Perils of Rosella.

"A narrow strip of beach borders a vast ocean which stretches off to the west. A pretty green meadow, dotted with bunches of wildflowers, goes to the east."

From the moment my parents booted up Roberta Williams’ old-school masterpiece, I was in love. And there was plenty to be in love with, from the vivid 16-bit colour palette to the genuinely groundbreaking Roland MT-32 soundtrack - the first ever musical score composed for a video game. The peak though, was the immersive world. 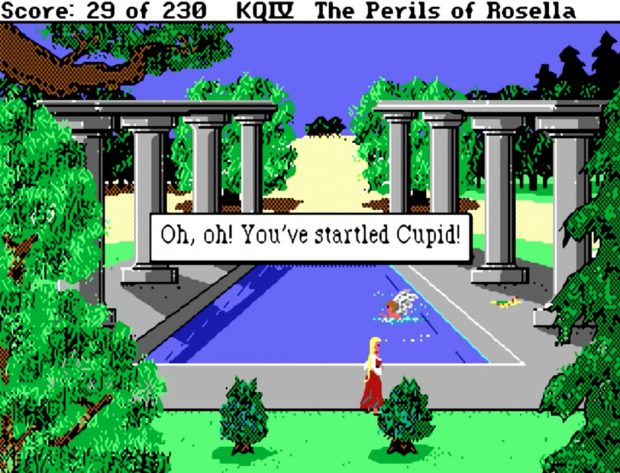 I was sucked in by the assortment of fairy tale tropes, from dwarves and fairies to ogres and haunted houses (not to mention the fascinatingly morbid ways to die). Best of all for a tiny, three-year-old girl though, was the courageous, blonde-haired princess named Rosella, an adventurer.

"A white, spotted snow leopard lies on the floor of Genesta's bed chamber. It lies quite still, but for an occasional twitch of its tail."

In the game, Rosella is given a scant 24 hours, played in real time, to hunt through the land of Tamir for a piece of magic fruit to save her dying father King Graham, back home in Daventry. Simultaneously, our dying fairy friend Genesta requires us to retrieve her ‘magic talisman’ from the villainous Lolotte, who’s taken up the post as a nefarious, bat-winged dictator in Genesta’s absence. 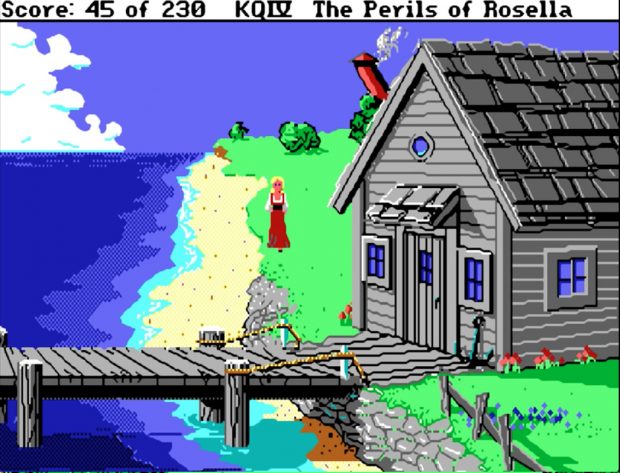 As with many young kids’ first gaming experiences, elements like ‘plot’ were completely incidental to the joy of simply ’walking’ from screen to screen, exploring the technicolour backdrops and meeting pixelated characters.

"You can hear the many chirpings and croakings of unseen swamp creatures."

It was an advanced game for a child my age. Fortunately, as an avid reader and lover of stories, my mum became similarly enamoured.

Our transition from bedtime stories to King’s Quest felt seamless, the execution of narrative easily evolving from one medium to the other. I’d sit snuggled into Mum’s lap to work out puzzles, find new secrets as my young imagination furiously drank it all in. 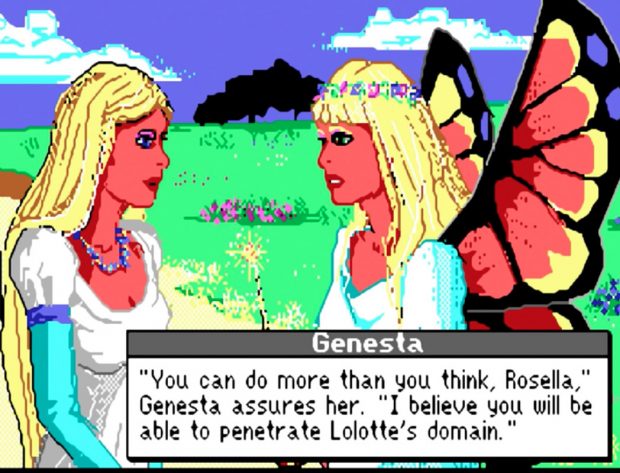 Soon, I began to lose myself in the land of Tamir. To direct Rosella from screen to screen, I’d place the family’s clacky, 80s keyboard on the floor and use my bare toes on the arrow keys. This made Rosella die, a lot. Sorry, Rosella.

After a while though, exploring wasn’t enough. I was hungry for more. What happened next? What about other places you could explore? What lay beyond the blue forest full of literally murderous trees? (A bunch of witches who also want to kill Rosella, as it turned out.)

"The treacherous path winds narrowly around the craggy mountain. In the distance, perched upon a rocky ledge, you see a dark, unfriendly castle."

One huge barrier stood between me and the answers, one that seemed larger than anything Rosella was coming up against: literacy. I’d not yet been to school, so I’d never learned to read, and certainly was too young to spell.

Like the rest of Sierra’s early catalogue, King’s Quest IV relied on text input, boasting a lively script of some 2000+ lines. From the straightforward "CLIMB LADDER" and "PICK UP BALL", to the slightly weirder "TICKLE UVULA" (that damn whale), every action, and its reaction put my literacy to the test. 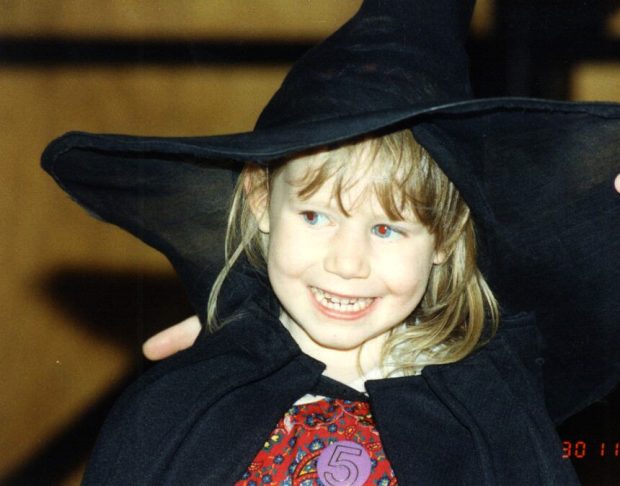 "What does ‘soliloquy’ mean?"

And even one time: "What’s another way to say ‘READ TOMBSTONE’?"

Weeks down the line, we’d find out that the noun we were searching for was the pointlessly obscure ‘epitaph’. Cheers for that one, Sierra.

"You see a beautiful, wild unicorn in the meadow. Its coat is dapple-grey, and its wonderful horn shines like gold. The unicorn shies at your approach and trots away."

Not unreasonably, my mum grew a tad weary of these relentless requests, and I soon became the owner of a thick deck of handmade flashcards, decorated with the game’s unique vocabulary. ‘Chasm’, ‘Diamond’, ‘Scarab’ - these became my ABCs.

Practice makes perfect, as they say, and in my personal quest to learn to read, the agonising difficulty of Sierra games worked in my favour. Though more forgiving than the notoriously harsh King’s Quest III, KQIV provided myriad ways to die, or worse - permanently ruin your game.

For instance: didn’t "LOOK ON FLOOR" before escaping the desert island? You’ll miss the crucial ‘Bridle’, and that’s it. Naturally, the game won’t tell you this, so it was up to us to realise it was once again time to reload and start over. Forget to pick up a worm, trade for a fishing pole, catch a fish, and throw the fish to the bird before the bird flies off? Boom, trapped on said desert island forever. 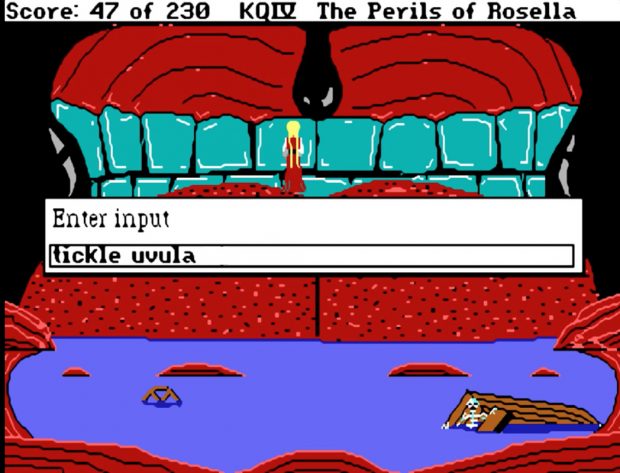 This is of course not to mention the surgical level of precision required to scale staircases, clifftop paths, and, at one point, a whale’s tongue (that damn whale!).

Although the experience was masochistic in the way that only early games can be, it benefited me considerably. I was forced to go back and type the commands again and again, making Rosella ‘KISS FROG’, and subsequently ‘PICK UP FROG CROWN’, for the umpteenth time.

And all of this in the late 80s, without a trace of a walkthrough.

Undeterred, Mum and I continued through the game. My reading skills, along with my obsession, grew in kind. I marvelled at how simple words could have ‘real’ effects, changing outcomes and discovering new worlds with sentences like "OPEN DOOR". I felt I was literally in the story. 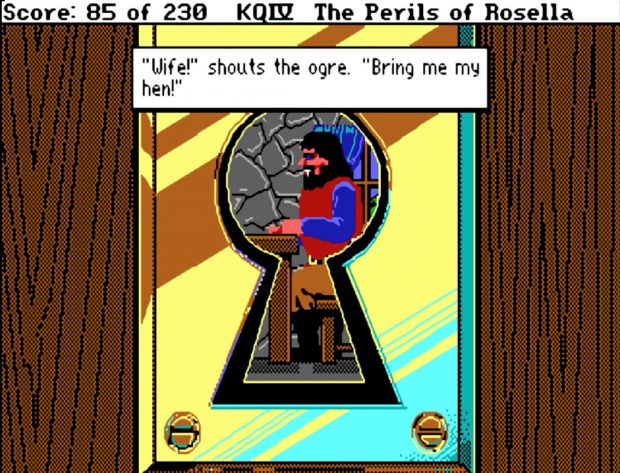 Time passed. We soldiered on. And then finally, one dizzying day in Edinburgh, Mum and I finished the game. My father had carefully loaded our hulking tower PC and CRT monitor into the car boot, driving it 400 miles to my grandparent’s house. We had done it.

By the time I started school, I had the reading age of a nine-year-old.

"You give the magic talisman to the dying fairy. Almost instantly, the color returns to her cheeks and her green eyes begin to sparkle. She sits up in bed, stretches, and smiles at you."

At the time, there was no way I could have known the lasting impact King's Quest IV would have on my life, or my mum's, nor how close it would bring us. How we’d talk about it years down the line, and reminisce about our time playing it, "scary bits" and all.

Mum died from a stroke in 2007. I imagine there aren’t too many instances where anecdotes about old PC games have been recounted to a church full of mourners during their mother’s funeral, but that’s what I ended up doing.

Today, I keep the memory of our time playing King’s Quest IV so close to my heart. It kicked off a lifelong love of gaming, not to mention reading and writing, boosting my education and shaping my career. But more than that, it will always remain my earliest, richest memory of Mum.