Last Day Of Spring by npckc is a short visual novel set in contemporary Japan. It tells the story of a cisgender woman, Erika, and her attempts at organizing a birthday for her trans woman friend, Haru, whom she had met during the events of npckc’s previous game, One Night, Hot Springs (npckc recently announced a third game in the series will be out at the end of the month). While Haru served as the player character there, Last Day Of Spring is told entirely from Erika’s perspective, even as it focuses on Haru.

This, in itself, should raise some alarm bells. It has been a longstanding criticism from trans activists and creators that not enough trans people are allowed to be the stars and speakers of their own stories. There is a tendency for depictions of trans lives made from a cisgender perspective to lapse into insensitive exoticisation of a “strange” person (a man who was a woman!), voyeuristic fascination with misery perceived as a trans fate, or an objectifying treatment of the trans life and body as a sexual fetish. At the end of the day, such representations end up being more about cis issues - anxieties, fascinations and desires as projected onto a trans person - than about lived experiences of trans people themselves.

And yet, Last Day Of Spring shows that a story of a trans life can be told through cis eyes without privileging them and their gaze.

Counter-intuitively, it achieves this in no small part by keeping Haru herself away from the screen. While she features prominently in the story, she doesn't appear person for most of it, be it because of work, shyness, or just a bad mood. She communicates with Erika mostly through text messages (at times consisting of more stickers than actual words), and brief, awkward phone conversations. Narratively, it helps to establish that Haru hasn’t been doing very well lately. Her work is giving her trouble, as do her unreciprocated feelings for her and Erika’s mutual friend, Manami. Thematically, it points towards what the game itself is about: the struggle to understand the experiences of others. 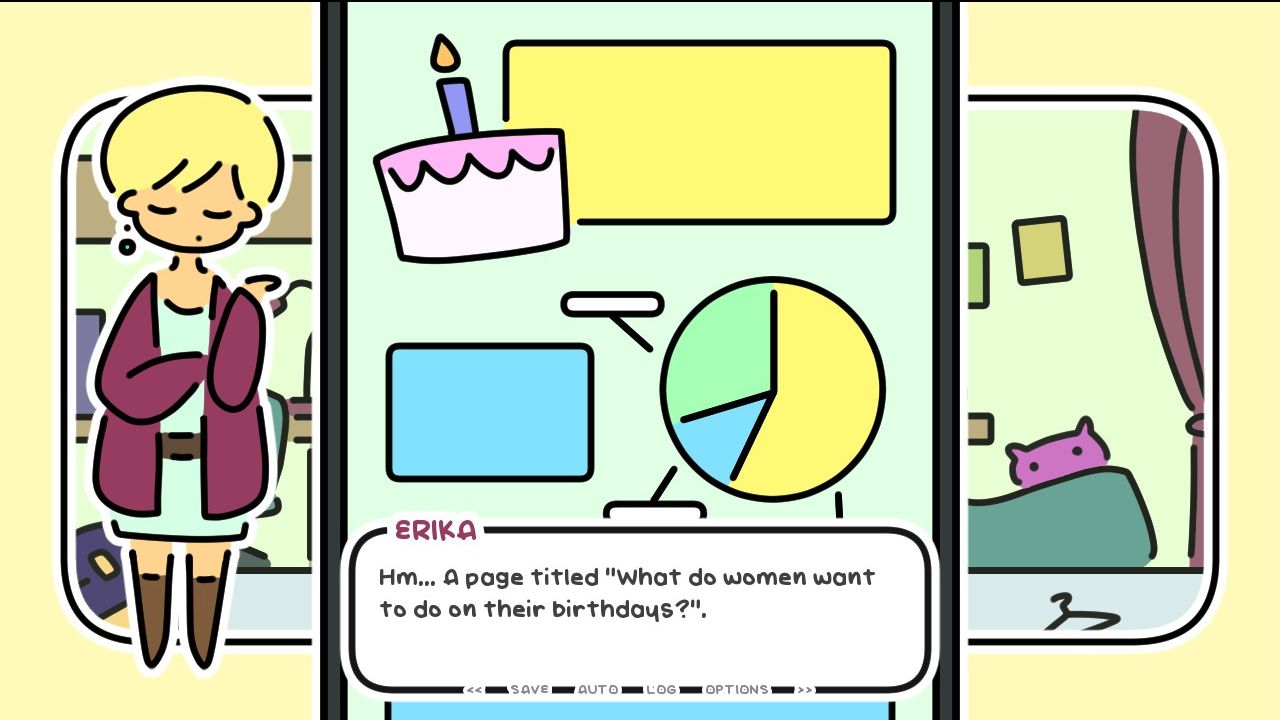 Erika is a kind and well meaning person. When she learns that she missed giving Haru's birthday she becomes ashamed, deciding to make it up to her by throwing her a special party. But as becomes rapidly obvious, first to the player and then to Erika, she doesn’t understand Haru’s issues as well as she thinks she does.

Her first idea is to fund a spa day for Haru, Manami and herself; treat the birthday girl to a luxurious bath and massage. Enthusiastic and forceful, she gets reluctant Haru to agree to this, sets out to organise and book the event, and then slams into a brick wall.

As it turns out, no spa is willing to book for a group including a trans woman. They are not “trained” for it, they lack “appropriate facilities”, and so on. For Erika, it is more than a surprise: it is an outrage. She can’t understand why they won’t service another woman; she remembers, after all, events of the previous game where an onsen provided for Haru as for any other customer. She is unaware of the chain of contrivances, the rule-breaking on the side of staff and plain good luck that allowed it to happen. What she saw as a basic expectation for how people should be treated was, for Haru, a rare lucky break. 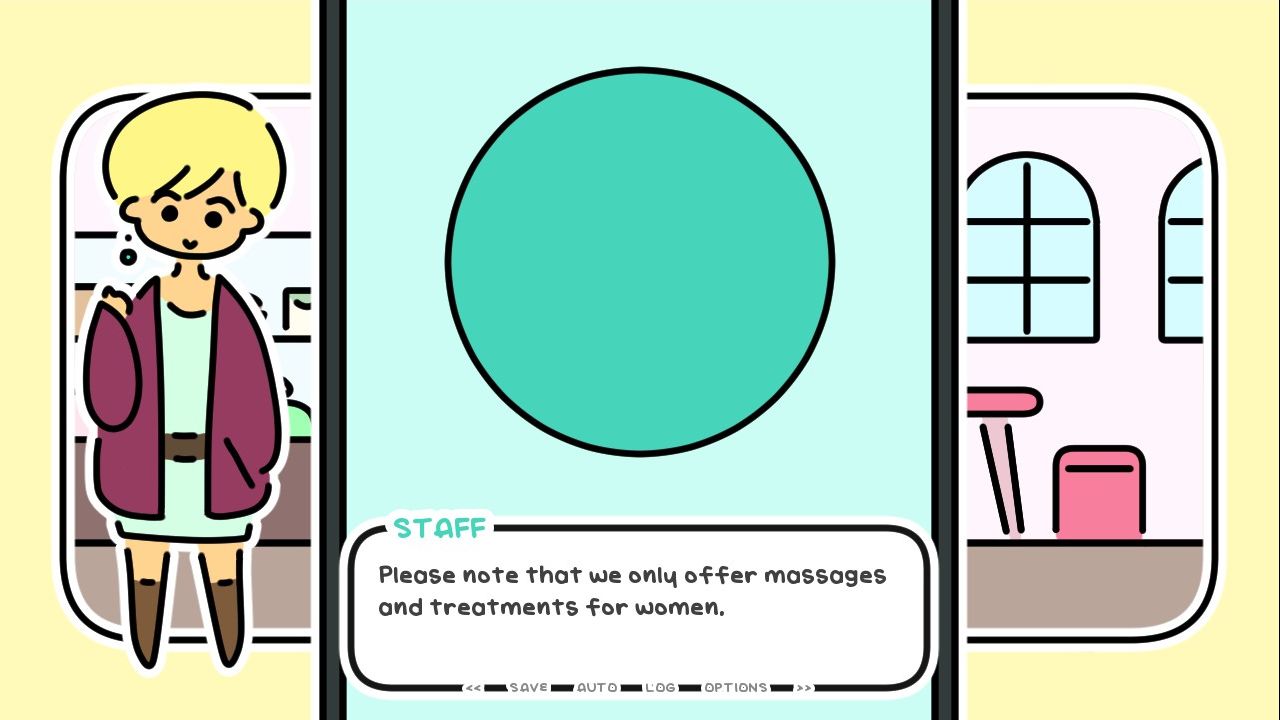 npckc draws attention to that brilliantly. When Erika tries to choose a spa, the player is offered what looks like a conventional visual novel branching path, able to choose from the cheapest to the most expensive option. And the choice is real: as long as Erika makes it for herself. The moment gender-dissident Haru enters the picture, all the paths close. As patterns of consumption under capitalism are gendered, then having a legible, recognised gender expression is a precondition to participating in it. To be able to exercise consumer’s choice is, surprisingly often, not a right as much as a privilege, one that Erika has carried all her life and never really had to consider.

“Never had to consider” might as well be Last Day Of Spring’s refrain. Over and over again, Erika, with all of her good intentions, is confronted with what she assumes but doesn’t know. Her ideas about trans lives are stereotypical and obvious: when Haru indicates she didn’t attend a coworker dinner, she instantly assumes it must have been due to harassment or abuse (tapping into the cultural image of a trans person as a victim). Only later does she realise that what kept Haru from attending wasn’t explicit violence, but the daily difficulties of a trans person. Even an accommodating workplace, one that allows Haru to use her name and live her gender day to day, will still force her to - for legal reasons - sign papers with her deadname and gender assigned at birth.

About this, and many other little things like it, Erika is oblivious. Why shouldn’t she be? Barriers faced by minorities are often invisible - a classic example would be how curbs that most able-bodied people don't notice can become obstacles for people with wheelchairs. Barriers and difficulties that trans people have to struggle with can be just as difficult to see from a cis point of view. 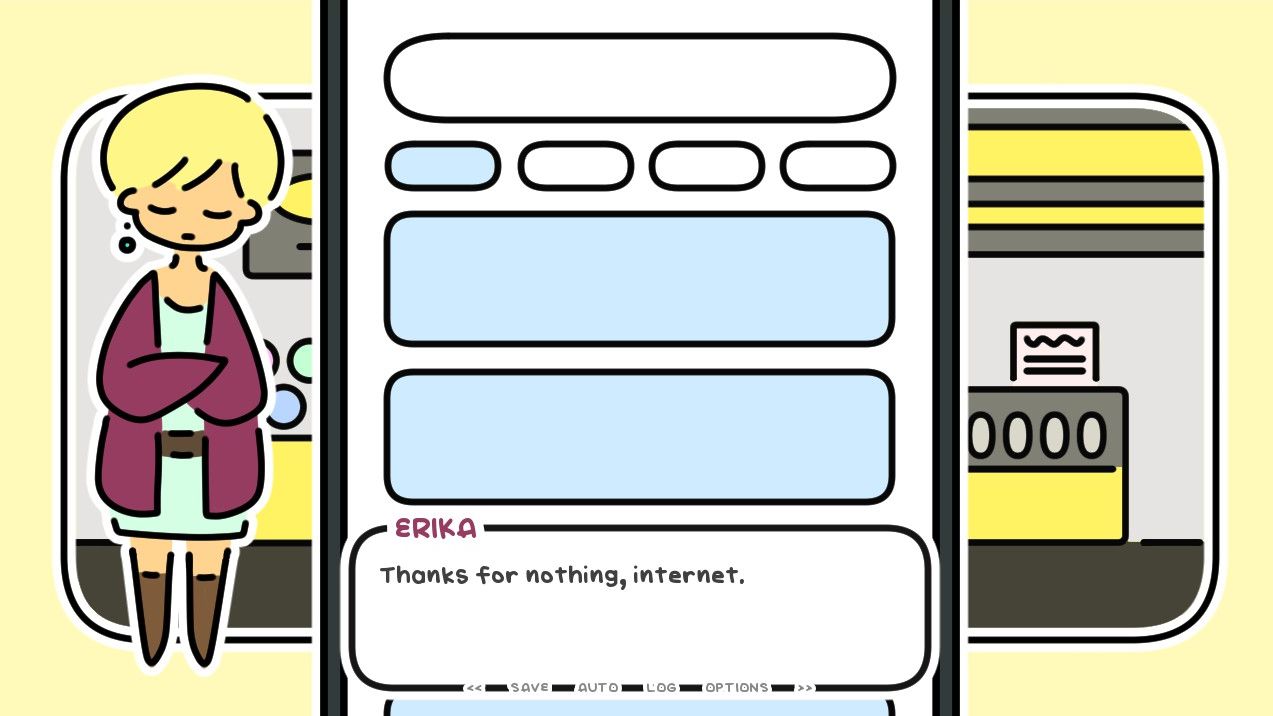 Towards the end of the game, when Erika and Haru finally meet face to face again, Erika is confronted with the extent of what she didn’t understand, and she shows her entitlement in one more very human way.

“How are you not… just angry all the time?” she asks.

This question makes sense, doesn’t it? Just the little bit of tripping over the curbs of trans life she had to experience were enough to make her sad, frustrated, angry. Services have been denied to her. She had to explain to clerks what “trans” is. She had to change her plans. She couldn’t find information she needed. 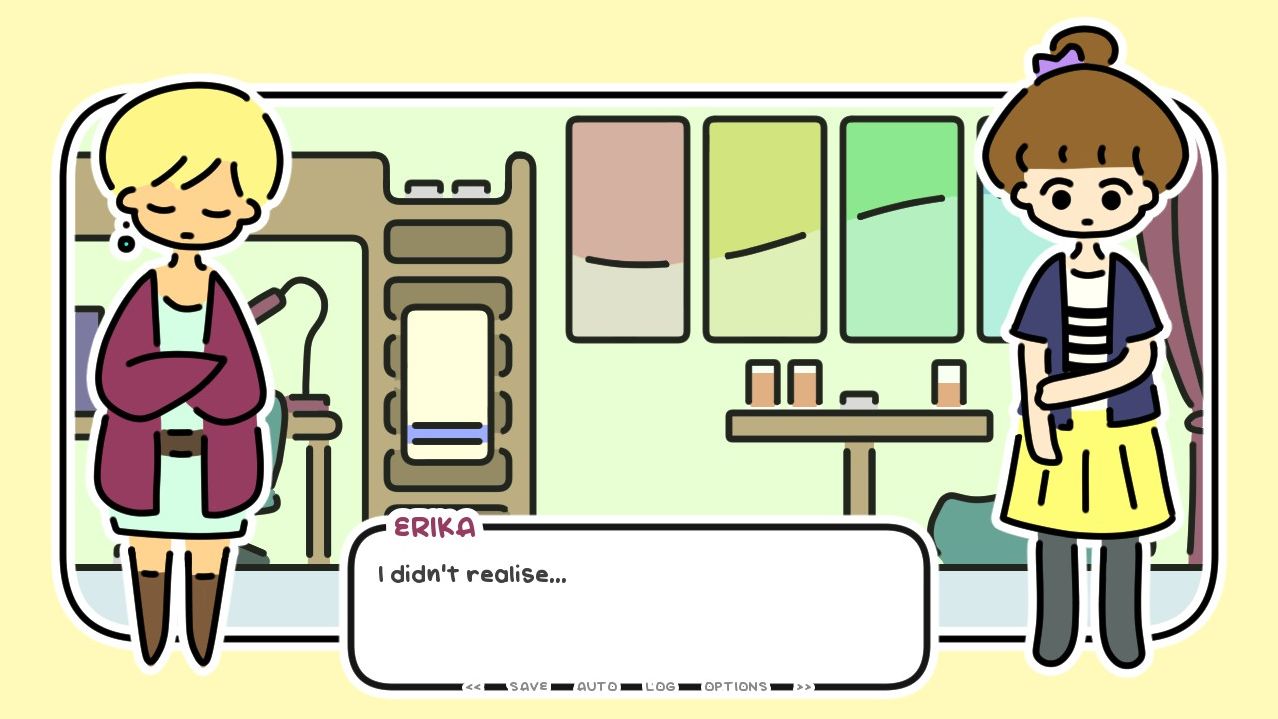 “You get used to it,” Haru answers. For her, after all, it is not a little bit. It is her life, and a life she has to - she wants to - inhabit and live well. Being angry all the time, fighting against all those tiny oppression that don’t even have a culprit behind them: it is all exhausting and tiring. To be upset and to be angry is eminently human, but to have a hope that voicing your anger will change something is, also, a privilege.

Last Day Of Spring is told from a cis perspective and is about a trans woman. But that trans woman refuses to be a slate onto which cis desires, fantasies and anxieties can be projected. She's barely there for most of the story, remaining an enigmatic presence hidden behind cutsey Messenger stickers and awkward conversations. This obstinate lack of transparency helps her accomplish something else: deflect the cis gaze back at the looker who, confronted with her own lack of understanding, is made not just to face what she doesn’t see, but also all the structural factors that contribute to this peculiar myopia.

Erica’s perspective, therefore, is unable to usurp Haru’s experience. Eventually, she realises that. She realises that she doesn’t know much, and shouldn’t presume. She gets over one of the basic mistakes of the cis point of view: assuming her experiences are emblematic of experiences for everyone. And for doing that, she is not rewarded. 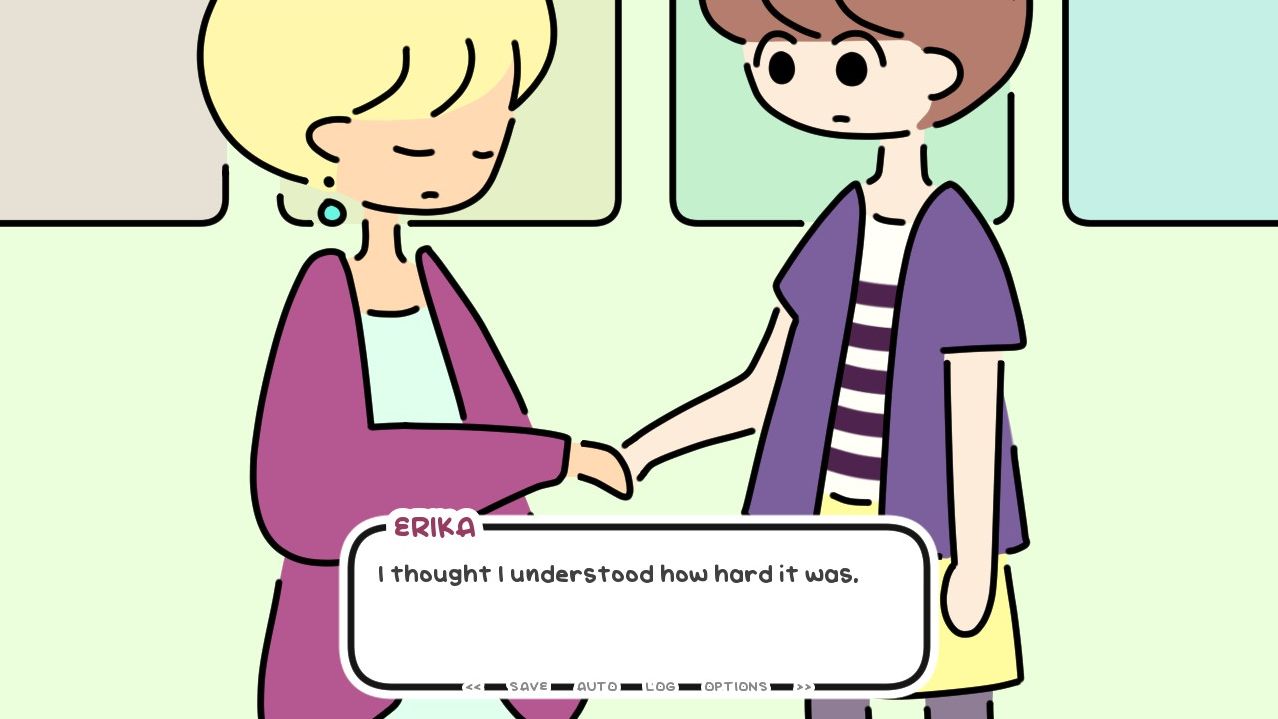 At the very end, having acknowledged her mistakes, Erika confesses to having feelings for Haru. Haru turns her down. It would be all too easy to cap the story of Last Day Of Spring with the reverse, with showing how an open minded cis person receives affection and intimacy as a reward for her ability to put prejudices and small-mindedness aside. It would be all too easy to end on a self-congratulatory note, showing Erika as the good cis, the one that can exhibit basic ability to be mindful of what she can’t understand, and have her receive a Haru-shaped prize for that.

That would be to make Haru an accessory to Erika’s story of learning and growth; would be to make this story about a trans woman ultimately a story about a cis woman. But in Haru’s refusal to be a prize, she instead asserts her own personhood, one that cannot be boiled down to a trans struggle for recognition. She has her own needs and desires, she is sometimes petulant and sulking, and while a lot of it ties into her experience of being trans, it is not reducible to it. And that means that there is no reward for Erika for trying to understand her. There shouldn’t be.