Lobotomy Corporation is an extremely simple game that's also about as complicated as building a microwave from scratch. This supernatural research and containment sim straddles that treacherously thin line between brilliance and disaster, which is of course where all the most interesting games end up.

Lobotomy Corp bases its theme upon the SCP Foundation, which, if you're not familiar with it, is a decade-old collaborative online storytelling project, based around a clandestine group that seeks to capture and study anomalous entities. That's the shtick here too: you're conscripted into a sinister organisation that keeps even more sinister creatures in its basement. Your job is to manage a team of researchers who can slowly tease out what these things are, come up with equipment to better survive contact with them, and stick 'em back in a cell once they inevitably escape.

In practice, Lobotomy borrows as much from roguelites as it does management sims, though the side-on, cross-section, XCOM base view strongly suggests it's more like the latter. Your team of researchers/captors will slowly grow in ability and gain new equipment, but there's a high risk they'll get themselves murdered by an escaped anomaly, a meltdown of otherworldly energies or even that they'll panic themselves to death after a particularly gruelling encounter with a spectral granny or malevolent field of static.

In another world, Lobotomy is a free-to-play mobile game in the vein of Fallout Shelter, in which you can spend Anomaly Crystals to speed up study times or buy superior psychic armour for your researchers. The presentation of the thing evokes that stuff so strongly, but the reality is that it's self-contained and cheerfully unforgiving. There are no shortcuts or hail Marys here, paid or otherwise. In other words, expect a lot of death.

Expect also a lot of bewilderment. We're talking flat-pack furniture levels of half-translated incoherence here, with the added wrinkle that there's so much damn dialogue that the relatively simple concepts you actually need to know are left adrift in a sea of extremely enthusiastic gibberish. South Korean devs Project Moon have decided against getting a non-awful English translation done, despite 18 months in early access, and this crosses from merely unfortunate into actively harmful to understanding the game. I had to get knee-deep in Reddit threads and the Steam forum to get a clear handle on some essential concepts - there is an in-game manual as well as the nonsense tutorial, but it's no less messy. 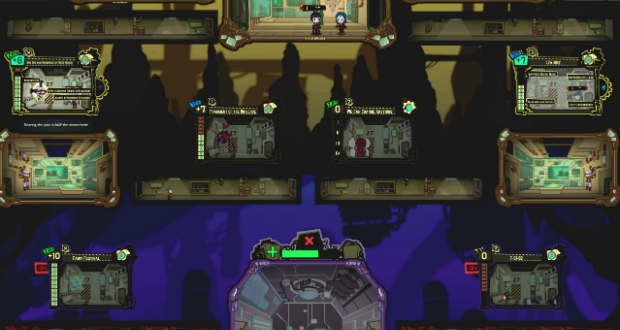 Still, once it's figured out later-game concepts play neatly enough into the early fundamentals that figuring 'em out isn't anything like so grim. Enduring the copious cutscene dialogue, which veers between the quality of English you'd find on the instructions for a pound shop digital alarm clock and oddly evocative accidents of unearthly menace, remains a consistent problem. But hey, we're all in this for the monster management, not a garbled backstory about sinister corps and their sinister AI helpers.

Managing the monsters primarily involves shutting your luckless researchers in a room with one of them, and after a certain amount of time they'll either be dead or will have racked up a few points that can be spent on unlocking info about the creature's strength and weaknesses. Information is very much power here, in terms of once you know that the murderous static beast is particularly susceptible to the blue stat but resistant to the red one, you can send in a researcher with appropriate stats and have a better chance of success. The points can also be spent on armour and weapons that are particularly suited to certain types of monster. There is a trial and error element here, which is an evasive way of saying you often have to chuck rookie meat into the grinder in order to establish what is and isn't safe for your more veteran researchers to do.

It can be a bit of a grind, if I'm honest, and I suspect it would have outstayed its keep a lot sooner if explanations had been clearer from the off. As it was, I spent over two hours working out what the hell was going on and getting my guys' brains fried out of sheer ignorance before I really began playing the game in earnest. Truly grating repetition is kept at bay by how intense it rapidly becomes. The act of sending a researcher over to creature X and waiting for a result again and again is repetitious, but by the time you're doing this with half a dozen different creatures, each with their own potentially lethal peccadilloes, there's simply too much plate-spinning for traditional boredom to be a factor. 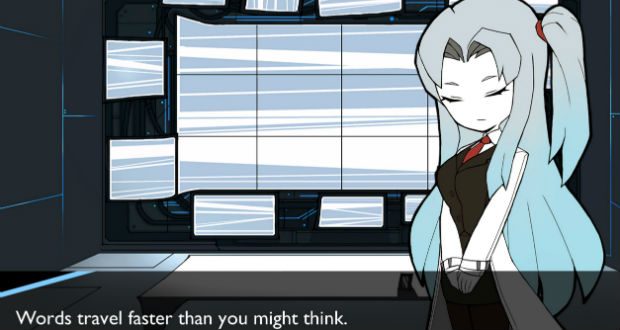 Always there - and always growing - is the risk that an anomaly will escape, at which point it starts roaming your entire facility and attacking indiscriminately. Researchers with the appropriate stats can subdue it, but there will almost certainly be blood. If you end up with two or more escapees at once, good luck keeping anyone you particularly treasure alive. There's also a sort of over-arching death clock, whereby too much poorly thought-out research conducted too fast can result in base-wide calamities. I'm still fumbling a little blind on that side of things, if I'm honest, but I have at least learned to not overreach, and to panic when the red lights start flashing.

On top of that, Lobotomy does a really nice line in sinister ambience. The prattling cutscene AIs are a bad time, but during your research missions, there's an abundance of barely-audible creepy sounds, escalating to open shrieking and blaring sirens in the event of an escape. The art and animation is simple, but judicious use of shadow and static, together with the sound, definitely nails this idea that you're unwisely sharing a building with creatures beyond all mortal imagining. 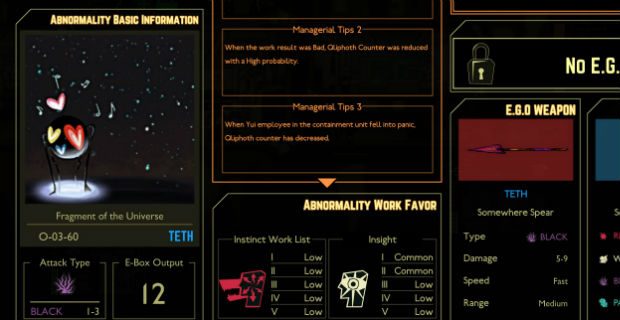 It's the creatures, most of whom are refreshingly different from the usual monster tropes, that are the stars of the show. We're limited only to seeing them as tiny, barely-moving 2D art and lurid (when comprehensible) text descriptions, but if anything helps these silently malevolent spirits retain a sense of real otherness. This, of course, is the great debt owed to the SCP Foundation concept, a sort of anything-goes hybrid of X-Files and Ghostbusters. Finding out what the next unspeakable oddball or bittersweet fantastical freak is will be is a constant push to continue, even as the simultaneous confusion, tedium and lethal intensity mounts.

Lobotomy Corporation is its own paradoxical anomaly: unnecessarily complicated and too small and repetitive, all at the same time. Its ideas would have been better-served if diverted into a wider range of activities rather than heaping so many poorly-explained stats and meters onto the tiny handful of mechanics that are here. I like it, but its snickering spirits will only haunt the tortured recesses of my mind for a few short days.