Nostalgia for utilitarian late-90s/early noughties PC accessories: truly, this is the darkest timeline. And I am its villain, for it was I who felt a tingle of absurd fondness when Katharine announced that the Microsoft Classic Intellimouse, a physically almost identical remake of the Windows gang's once-ubiquitous USB mouse, had arrived atop her trembling tower of plastic and cabling. It was I who proffered the fateful words "I would love to review that!" Why? Why did this plain, grey input device speak to me so?

Man. The thing about the Intellimouse is that it was always solid, rather than exciting. It ushered in the age of ball-free, optical mice with scroll wheels, and as such set the template for almost every mouse sold today. It was a landmark piece of hardware without a doubt, but right out of the gate all the things it did were things that seemed immediately obvious and necessary, as opposed to groundbreaking. Things that are ten a penny now.

So it's not the Intellimouse Classic's features that made it speak to me. A scroll wheel, two side buttons, a 'Bluetrack' sensor that can be used on most surfaces - I've got ten-year-old mice sat in my desk draw that can achieve all these things and more. I've got a wireless one sat on my desk right now that does all these things without curling a metre-long plastic worm around the base of my monitor. There is zero reason to buy the Intellimouse Classic over any other decent, mid-range wired mouse. 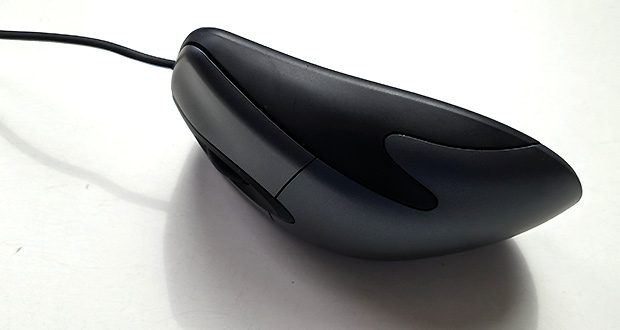 And yet. It reminds me of a simpler time. Not fields and football in the street, but when the fact of being online was a straightforward joy, as opposed to a warzone of heartbreaking news, mass misanthropy and weaponised geekery. A time when computers and games seemed on the verge of creating infinite possibilities for excitement.

Hell, even of a time when "which mouse should I buy for £30?" was a straightforward question with one straightforward answer, as opposed to having to research dozens of boondoggle features and wonder whether enduring a mouse that looks like Robocop's schlong is a necessary consequence of it being super-responsive in video games.

The Intellimouse Classic, like the 2003-2006 Intellimouse Explorer 3.0 whose design it recycles, is plain and lightweight. Imagine starting a new, boring data entry job, and this is exactly the mouse you would expect to find waiting for you at your desk on the first day. There is precisely nothing wrong with it, with the arguable and swiftly-forgotten exception that it initially feels a little bit too light. But there is precisely nothing about it to make you think, "Yes, this is my mouse." 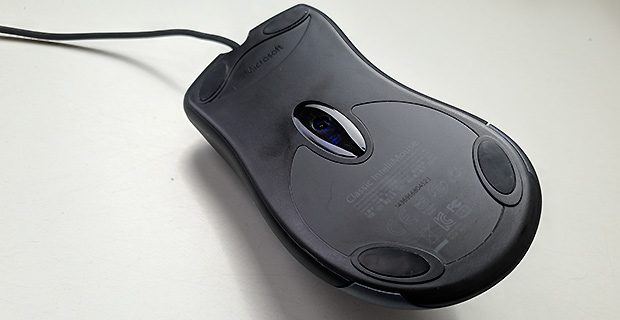 It is perfectly fast - not high-end gaming mouse fast, but I have had zero issues with it in anything I play. The sensor, ugraded from olde worlde optical to 'Bluetrack', seems to work on almost anything mostly-flat. I even used my glass-fronted tablet as a mousemat and it seemed happy enough.

It has curves in all the right places, by which I mean it is suitably ergonomic and comfortable, not that it makes a boy's mind turn to sweaty mischief. I find myself reaching helplessly for the adjective 'boxy' to describe the Intellimouse Classic, even though every edge is smoothed and tapered. I think it's because, when I lift it up, the whole thing feels as though it is the plastic container for some other, more exciting item.

It is perhaps just a touch too wide for my personal tastes and average-sized hands (n.b. if you've ever met me and are scoffing at that, for some reason I have normal-scale hands and feet despite my short stature), but not so much that I can't live with it.

The side buttons are exactly where you would want side buttons to be, with some curved protrusions on each to help you find them. The latter, at least, is a real improvement over the tiny, flat or angular things we often see on, for instance, high-end Logitech mice. 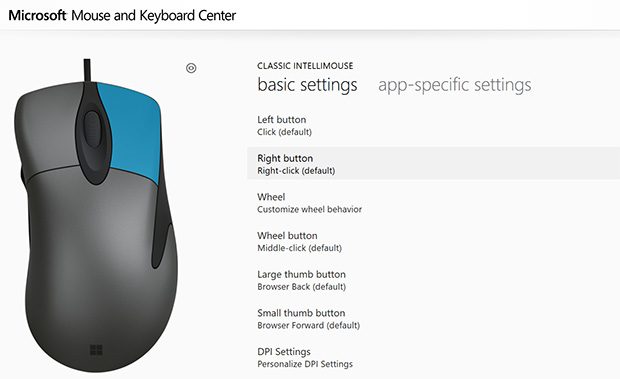 In fact, the only genuine criticism I have is that it could really stand to have an on-body DPI adjustment button, as its maximum 3200 DPI is perfectly good for games (presuming you're not a pro) but just a bit too twitchy for desktop work. Having to dive into Microsoft's spartan but slow-to-load Keyboard & Mouse Center software every time you want to change it is a real pain in the Intelliarse.

At £30 / $40, it is a perfectly fine desktop mouse that is perhaps £5-£10 too expensive for what it is. If you were planning to buy a new mouse for a mix of general usage and light-to-medium gaming, would I recommend this one to you? Probably not. But I definitely wouldn't recommend against it.

I confess, I did feel a 5-second thrill of weird nostalgia the first time I wrapped my palm around the Intellimouse Explorer, which then dissipated as quickly as it had arrived. I imagine that, ten years from now, I will feel the same way when I stumble across an iPhone 4 at a car boot sale.

What all of this really proves, of course, is that despite all the bells, whistles and marketing nonsense that has preoccupied mouse-world since 2003, there have been no truly meaningful improvements to our primary means of interacting with our computers. I very much doubt that will have changed by 2028 either. Anyway, the Intellimouse Optical was loads better.