We've seen how much damage one theoretical physicist can do. Sven Co-op lets you unleash the vortex of chaos of a dozen Free Men (and women) upon Half-Life. Once just a mod enabling you to play the classic FPS with pals, it received Valve's blessings to go free and standalone on Steam in 2016, bundled with a free copy of the original Half-Life re-tooled for multiplayer. Still actively updated and with its own modding scene and map hosting hub, Sven Co-op is now a portal to thousands of weird Half-Life worlds. They're waiting for you, Gordons, in the test chambers.

At its most basic level, Sven Co-op is Half-Life with some maps tweaked for easier co-operative play. If you're playing on a local network with friends, it's a doddle to set up. Just have one player pick Start New Game, set it to LAN mode, and chose a map. -sp_campaign_portal is a hub where you can get your setup done quietly, and pick a map when ready. Just have the other players pick Join Game, then check the LAN tab. By default, Sven contains Half-Life, its demo, Uplink, the They Hunger zombie horror trilogy, plus a bunch of smaller adventures built for Sven.

Sven also supports official expansions Blue Shift and Opposing Force (albeit with fewer alterations made, so you end up with some maps being devoid of enemies and just a few seconds long). Installing them is a bit of a hassle. You'll need to own and download both expansions, and run them at least once. Then look in your Steam\steamapps\common\Sven Co-op\svencoop directory. If you've an older OS, you can just run Install_bshift_Support.bat and Install_OpFor_Support.bat. If you have Windows 10, you'll need to first do the following:

Edit FindHLDirectory.bat in Notepad, or whatever other text editor you use. Find the line "IF [%pInstallDir%] == [] (" and change it to "IF [%pInstallDir%] == [""] (" - just add those two quotes in the brackets, and you can run the Blue Shift and Opfor batch files as usual, and access those levels either from the level select screen or the lobby map.

The last boring thing to deal with here is setting up a game if your players aren't on a LAN. Virtual local networks like Hamachi may allow this, if your network security isn't excessively tight. Failing that, one player will have to run a dedicated server. It's fiddly and too complicated to go into detail here, but you can find a guide here on the Sven Co-op official manual page. But that's all for if you want to host a game.

Probably the most fun you can have with Sven Co-op is just picking a server at near-random and jumping in, alone or with pals. Half-Life's mercifully small file sizes and the speed of modern internet means you'll get maps served to you in just moments, and you'll never know what you'll be playing. Over the course of a couple sessions, here's some worlds I stumbled into. Links to every map shown are provided. 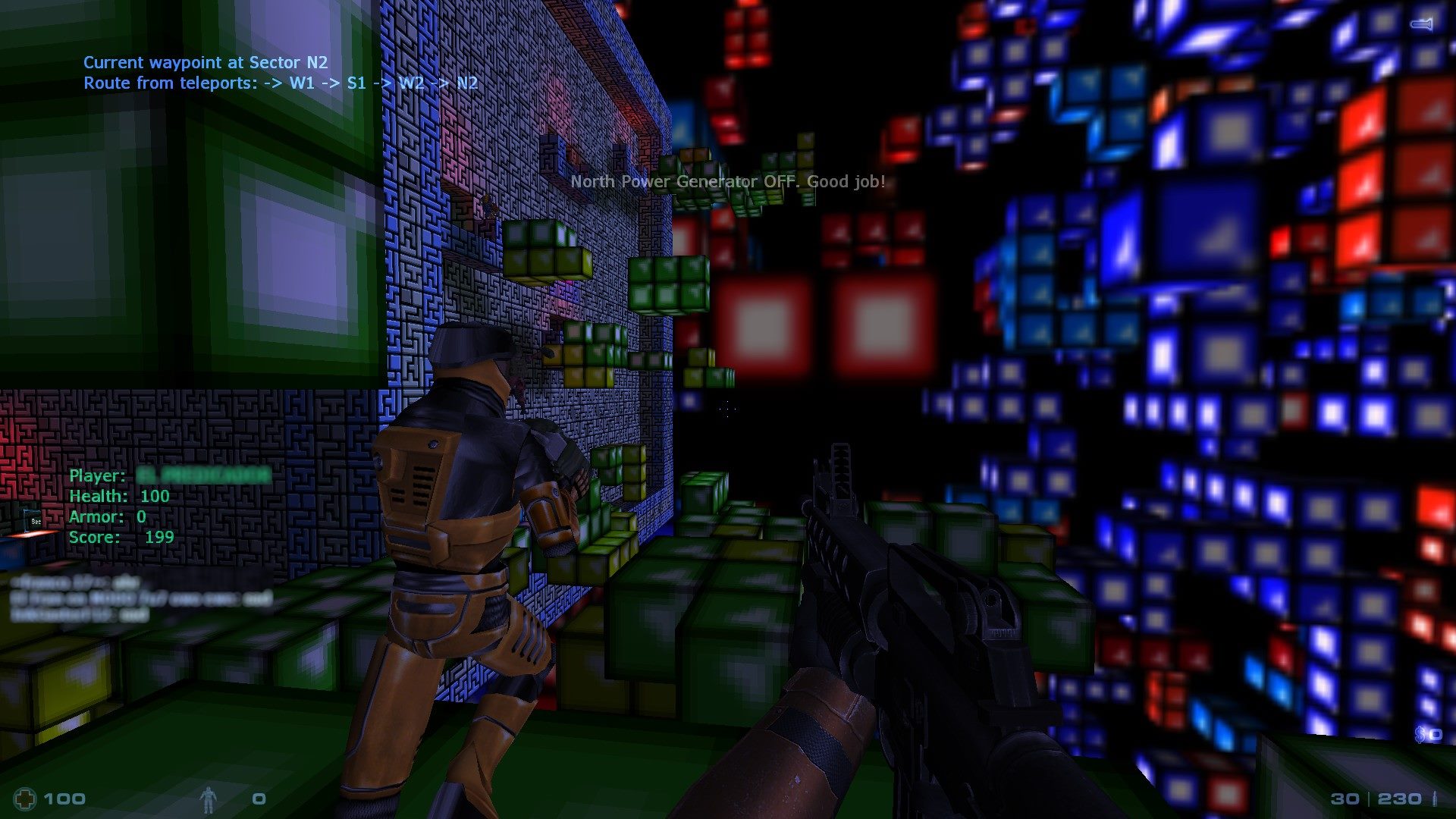 One of the first maps that I ended up on was part of the Tetris series by "A1win", one of Sven Co-op's defaults. A sprawling, wildly complex maze of platforming, puzzling and combat, weaving in and out of a gigantic central cube, this is as far as you can get from Black Mesa. It's full of clever, playful level design, using the abstract nature of Tetris blocks to build mystery. Is that going to be an elevator or a trap door? Block functions are colour-coded, but it can be hard to remember which is which. 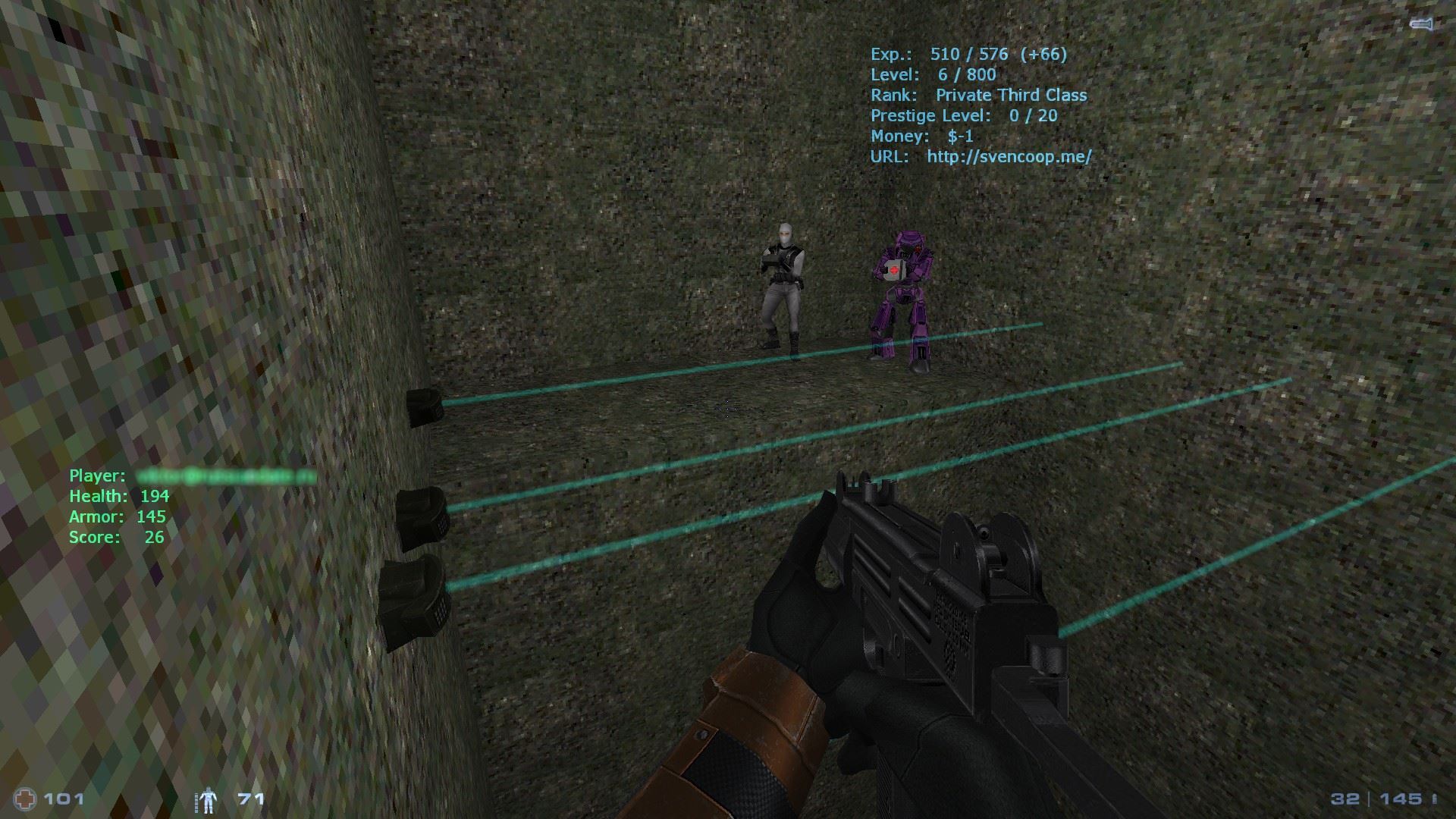 After falling to my death a few times, I jumped back down the rabbit hole, onto Devian's Legend by "Shattered Heart Lynx", a series of single-room challenges. Funniest was a narrow grey room with a big pit and infinite trip-mines. All you have to do is create a bridge out of these twitchy explosives and cross to the other side. Easy! One of the fine lads in the room with me patiently waited for me to build a bridge, then set off the bombs when I was inches from the other end. I'm not even angry - it was perfectly timed slapstick. The map also featured a boss fight against a Black Mesa loader-mech. Map completed, we stepped into a much weirder world. 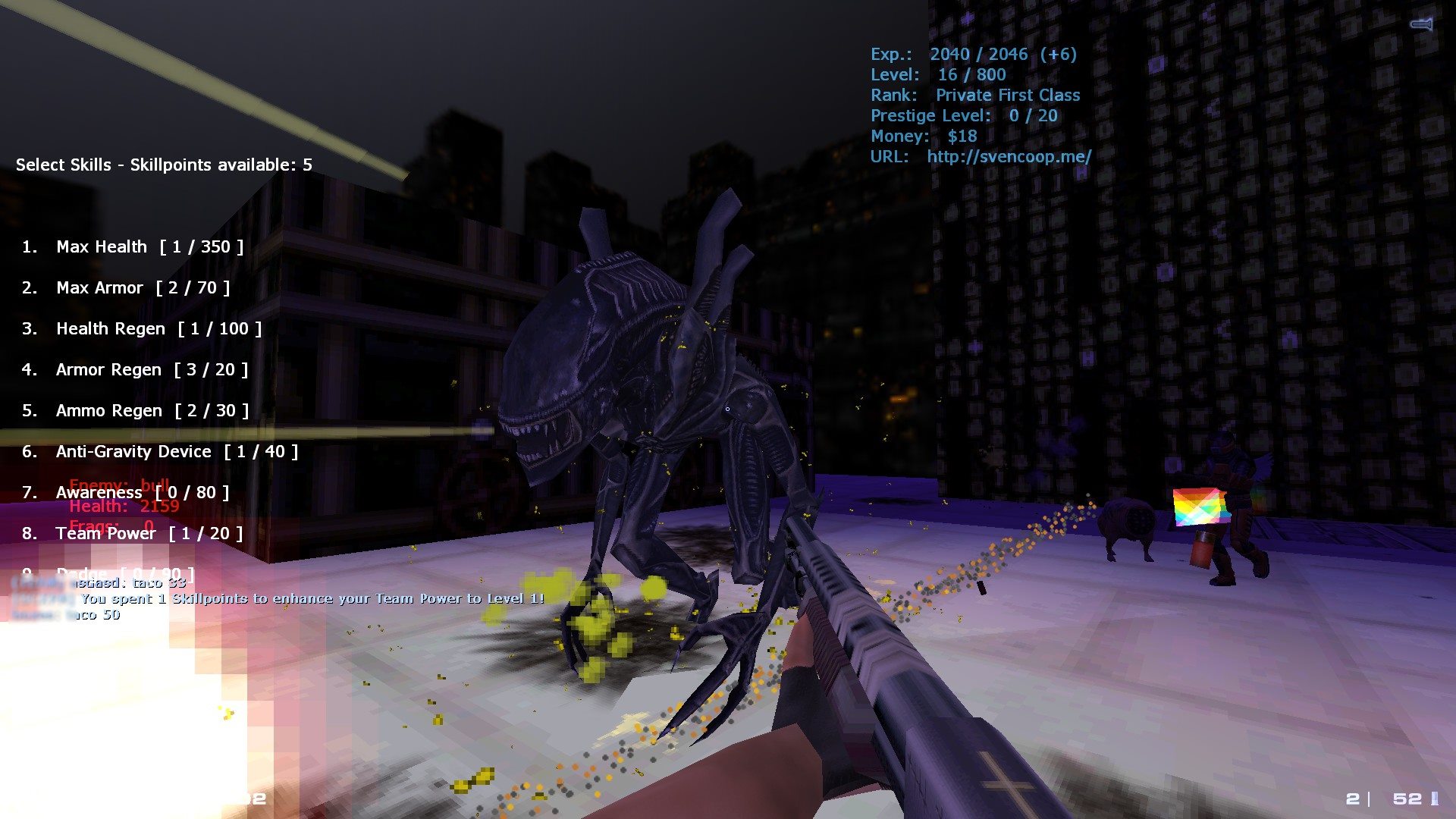 The wildly confusing scenario pictured above is Virtual by "Navy Seal". In this shot, I was fighting a giant xenomorph from Aliens, but a few minutes prior, I'd been tussling with swarms of rocket troopers on towers, then beefed-up Half-Life assassins (backed up by a far-too-beefy NPC that the game claimed was Solid Snake). Every few moments, a new round would begin and it would get weirder. Eventually, the ground opened up to swallow us and drag us to hell. It was here that we fought Purgatory, a poorly modelled Stay Puft Marshmallow Man. 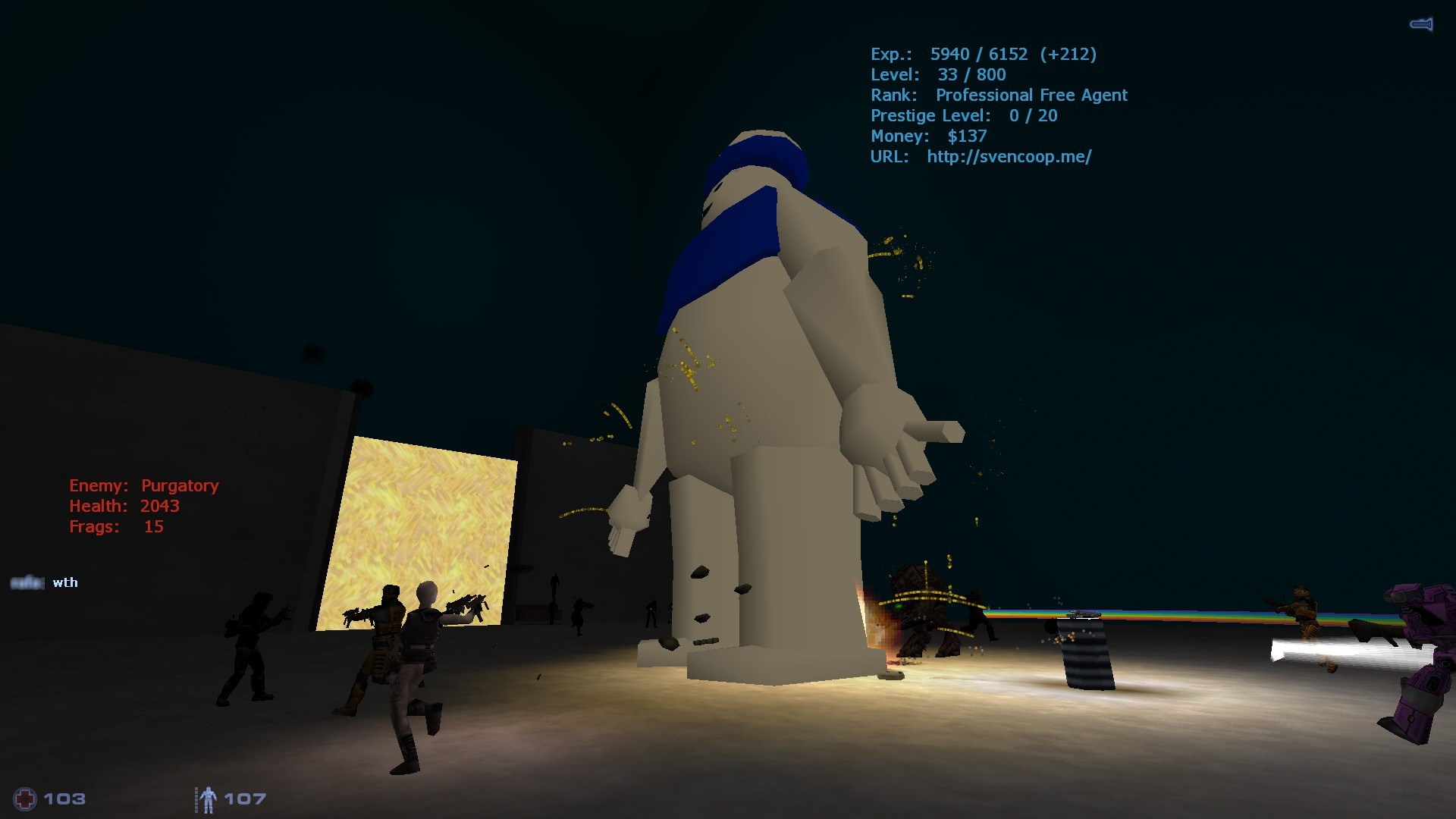 I'm not even sure if it was attacking. I'm not sure if anyone knew what they were doing. Everyone was just running around screaming and shooting, which was even more chaotic than usual thanks to this server's RPG progression sub-mod. Regenerating health, armour and ammo make not for a balanced experience, but for a multiplayer muck-around, it's grand. Eventually, our blocky nemesis fell and the map ended. Cor, this is like a brilliant idiot version of Sliders, innit? 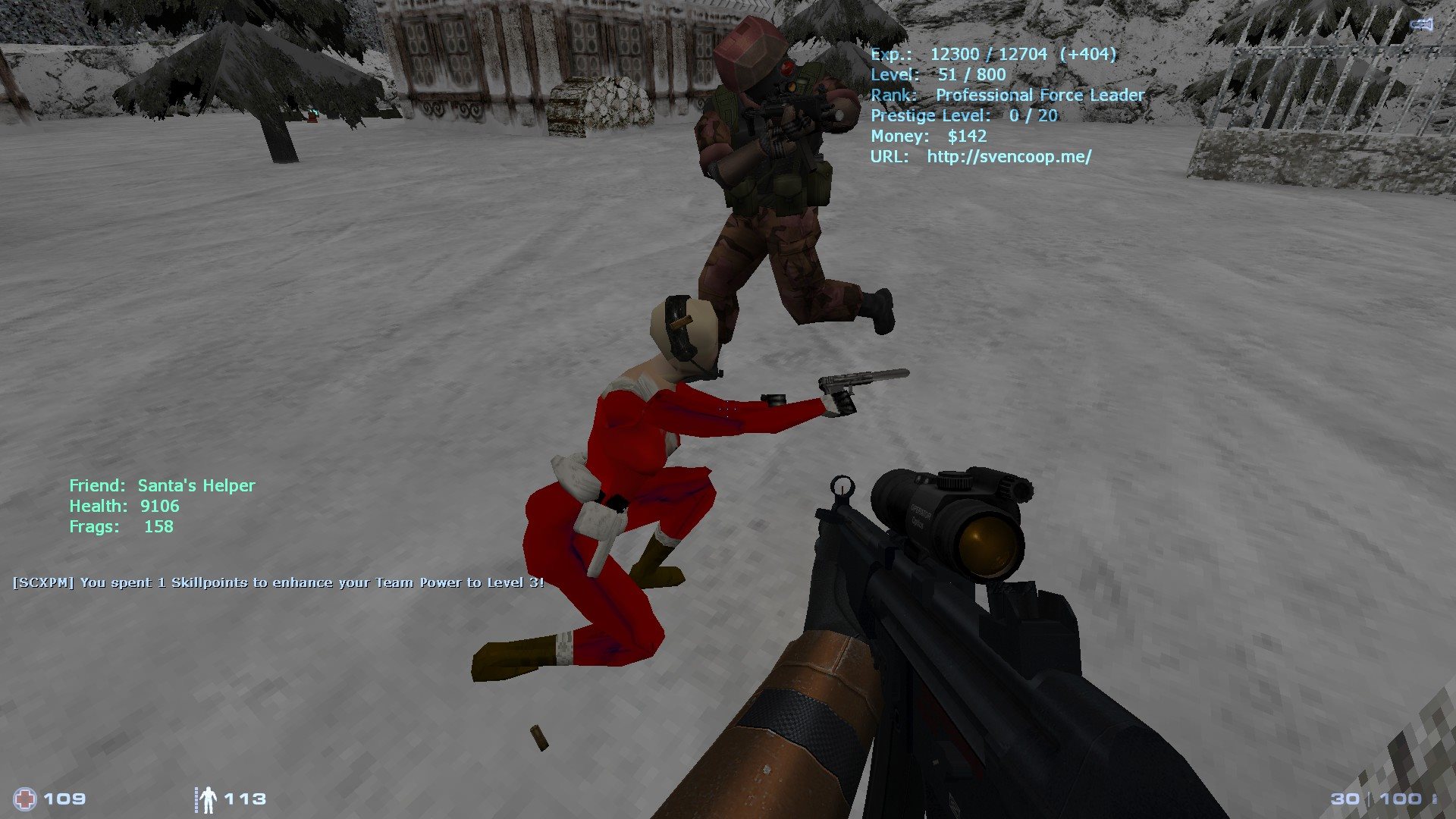 Next we were into a winter wonderland. It all fell apart a bit here. The change of scenery was initially amusing, but the only enemies we found were, it seemed, invincible, and ammo was running out fast. We were probably all missing something, but none of the many players seemed to care enough to figure out what. I tapped out of the server, but not before finding a friendly "Santa's Helper", an amusingly re-coloured version of Half-Life's lady assassins. She's nigh invulnerable, aggressive, and very bad for your elf. 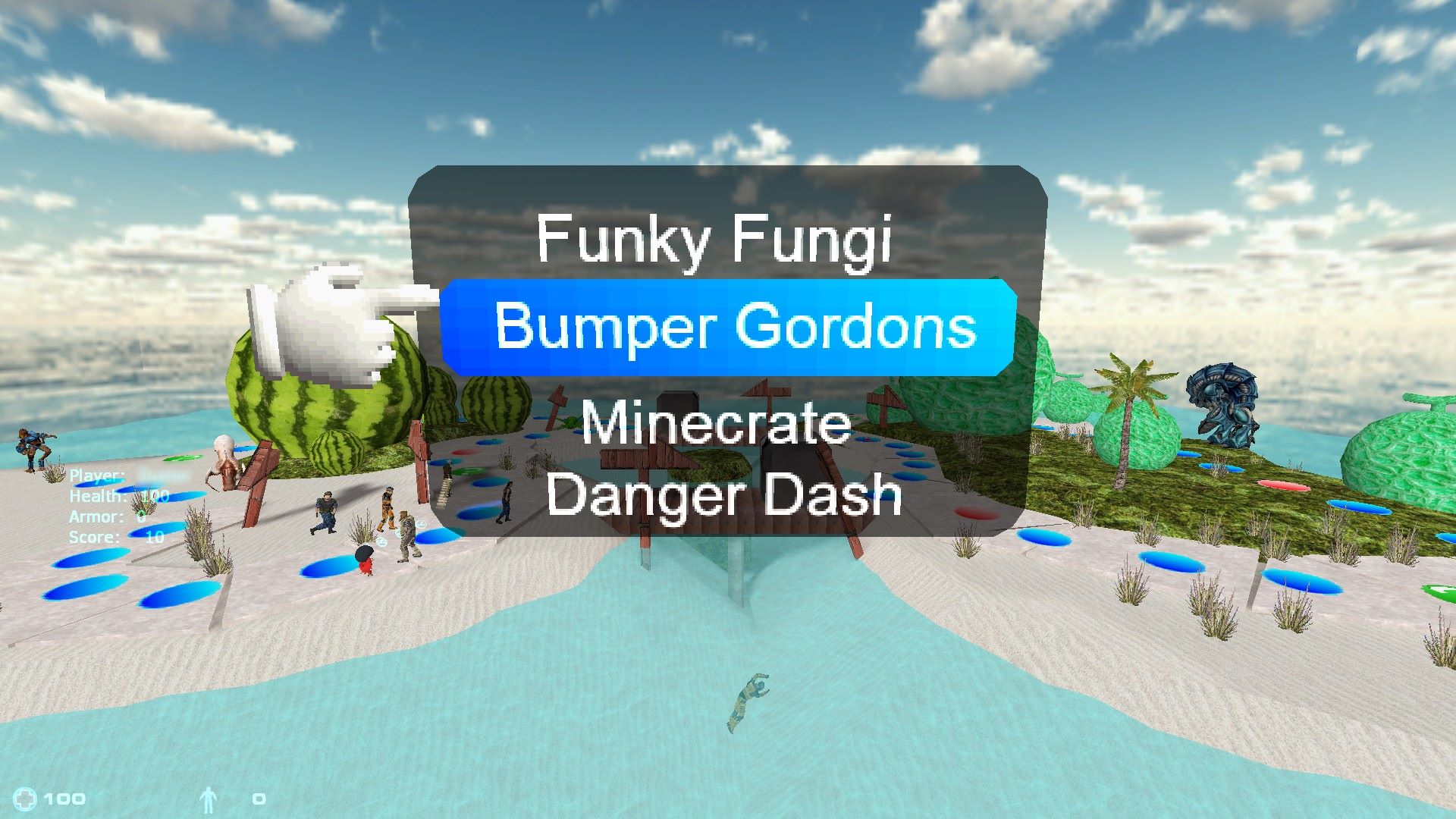 I landed in Bot Party by "w00tguy123", which is Mario Party for Half-Life. Apparently in earlier versions it was even playable with bots, but you'll have to find some humans if you want to play this mix of arcade minigames and low-intensity board game. It's bright, it's sunny, it would be wholly cheerful were it not for constantly moping Depression Dave the Gargantua. Good, nonsensical fun even with strangers, although it can get weird if there are too many players. 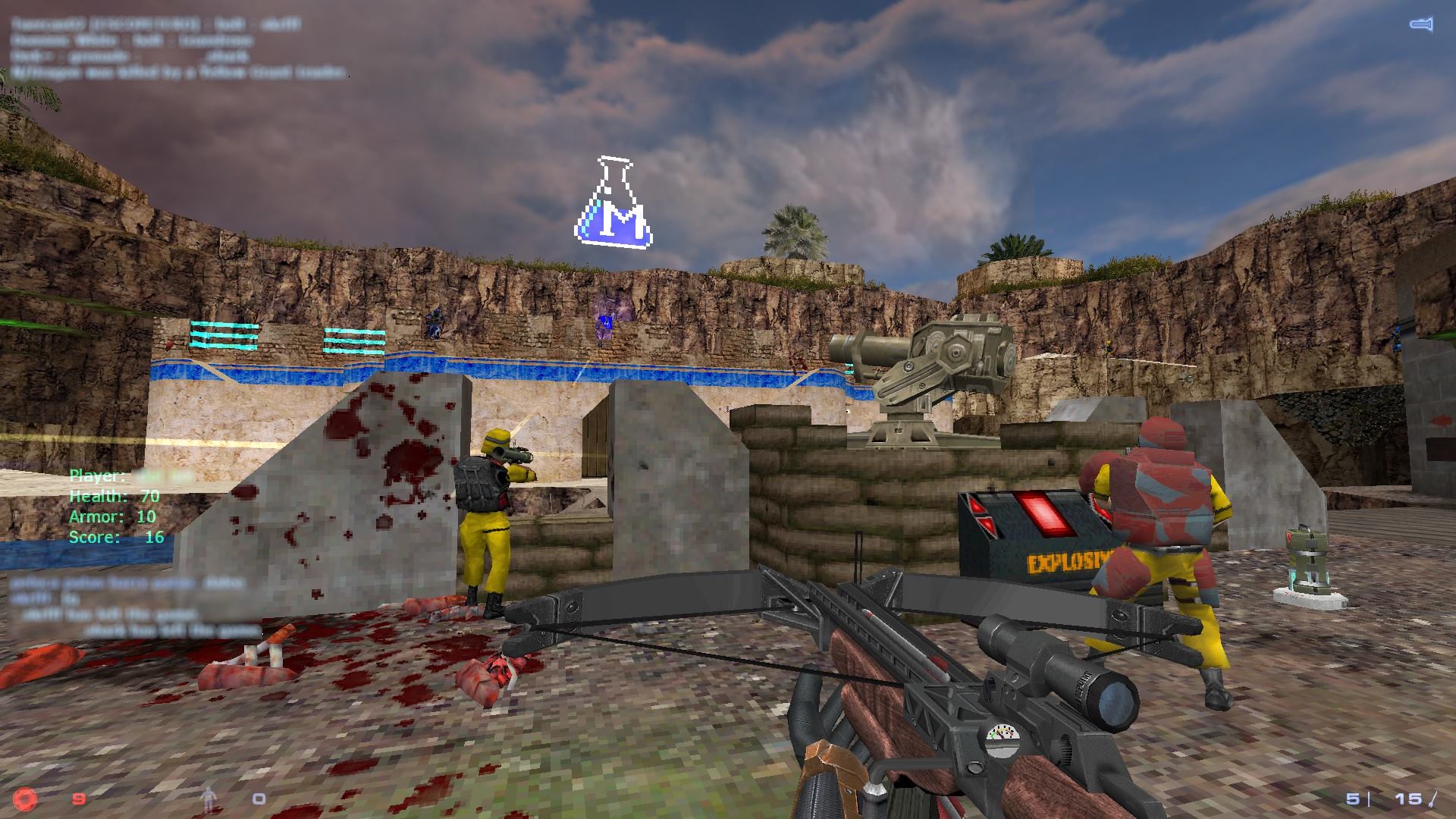 Then there was Warforts by "Tuesday's Avenger", another of the bundled maps, but a great change of pace for an overcrowded server. It's a raucous game of Capture The Flag, with multiple mid-map objectives. There's a big cannon in the centre which can be used to pummel one base and towers on the sides that can be claimed to spawn NPC alien troopers to provide distraction. Each base has a sealed front gate, laser force fields and turrets which can be broken, making for a fun siege. The players liked it so much, they voted to play the map again, so I hopped server once more. 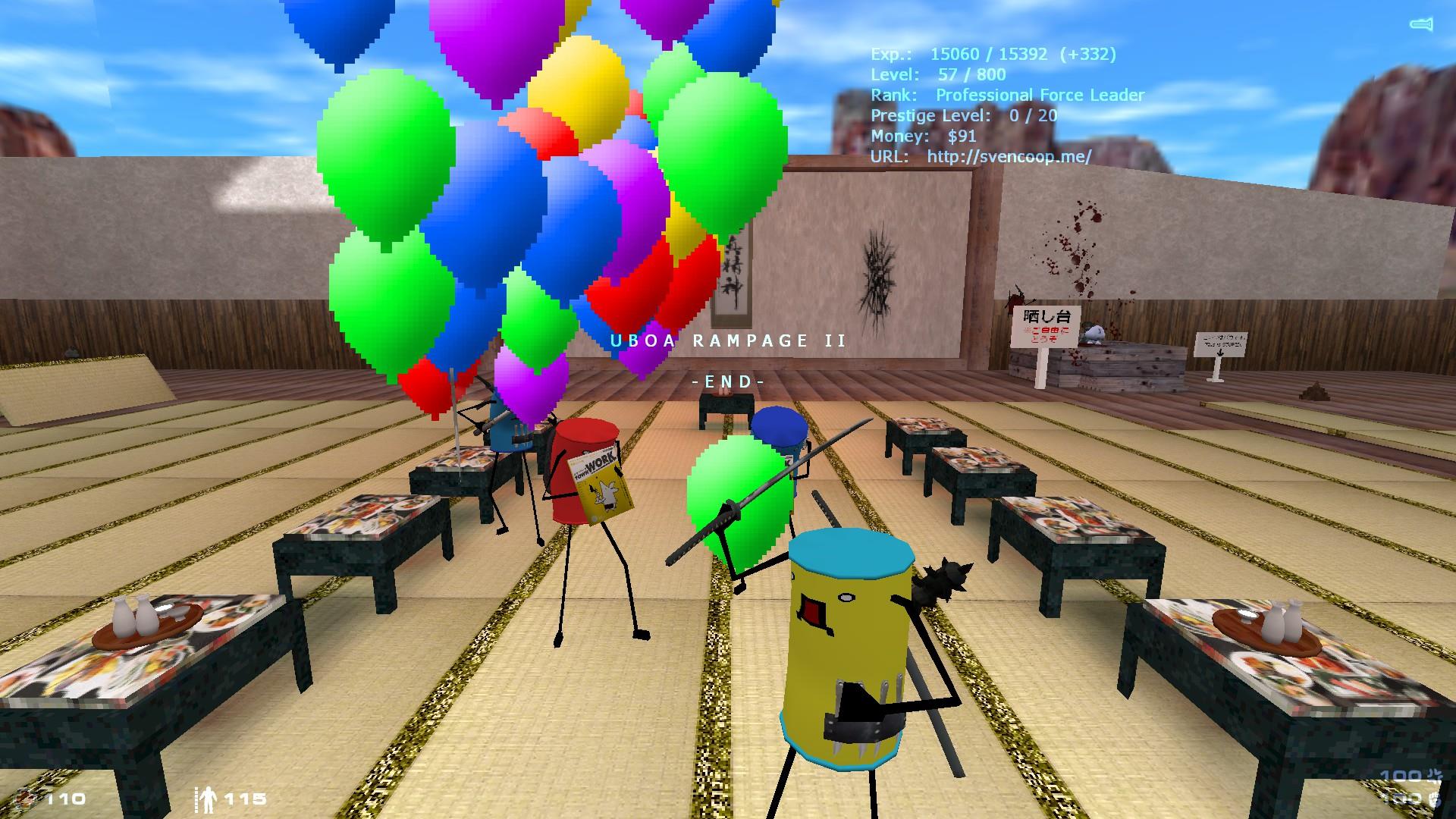 I have no idea how to properly describe this. It would seem that there's a small Japanese mapping scene for Sven, and it's somehow weirder than any other group of players for an already-weird mod. In Uboa Rampage II by "takedeppo.50cal", all the players are angry drinks cans, picking from character classes from a magazine. We battled legions of Uboa Men (you can tell because it's written on them) across the city and eventually the evil Thunder Master. When defeated, he apologised and threw us a drinking party. Given that we were all drinks, did that count as that cannibalism? 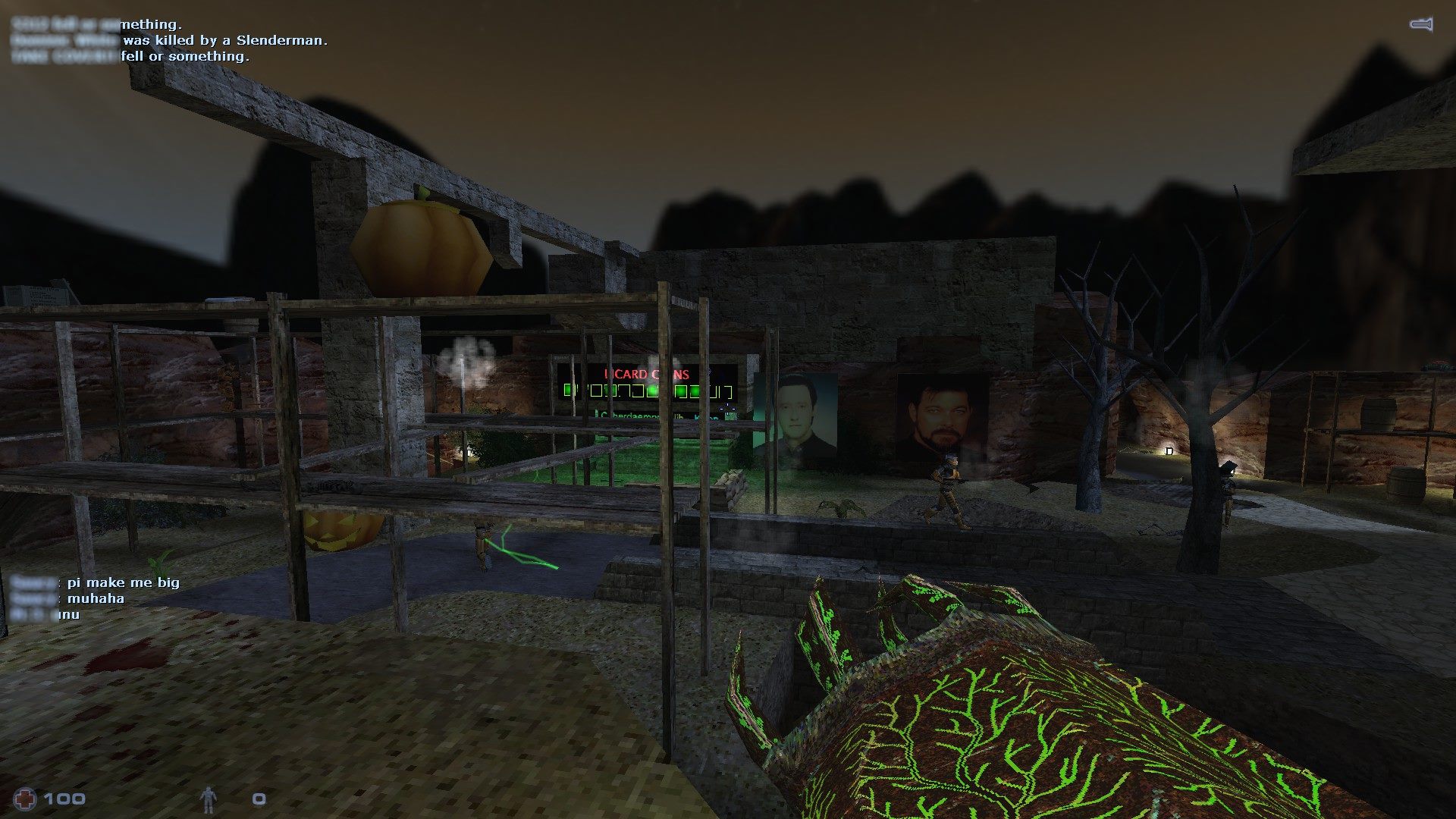 I jump server once again, and end up neck deep in Keen Halloween, part 6 of 7 by "Keen" and pals. Some of the dozen Gordon clones (I lack the correct model pack for this server, so most are identical) had pumpkins for heads. We were told to find Gordon Freeman's missing brain, and also collect some Picard Coins along the way, while the rest of the Star Trek: TNG cast stared down at us from giant photos. We were besieged by ghosts and skellingtons, but they were less haunting than the bellowing anime meme voice clips that players spam continuously. 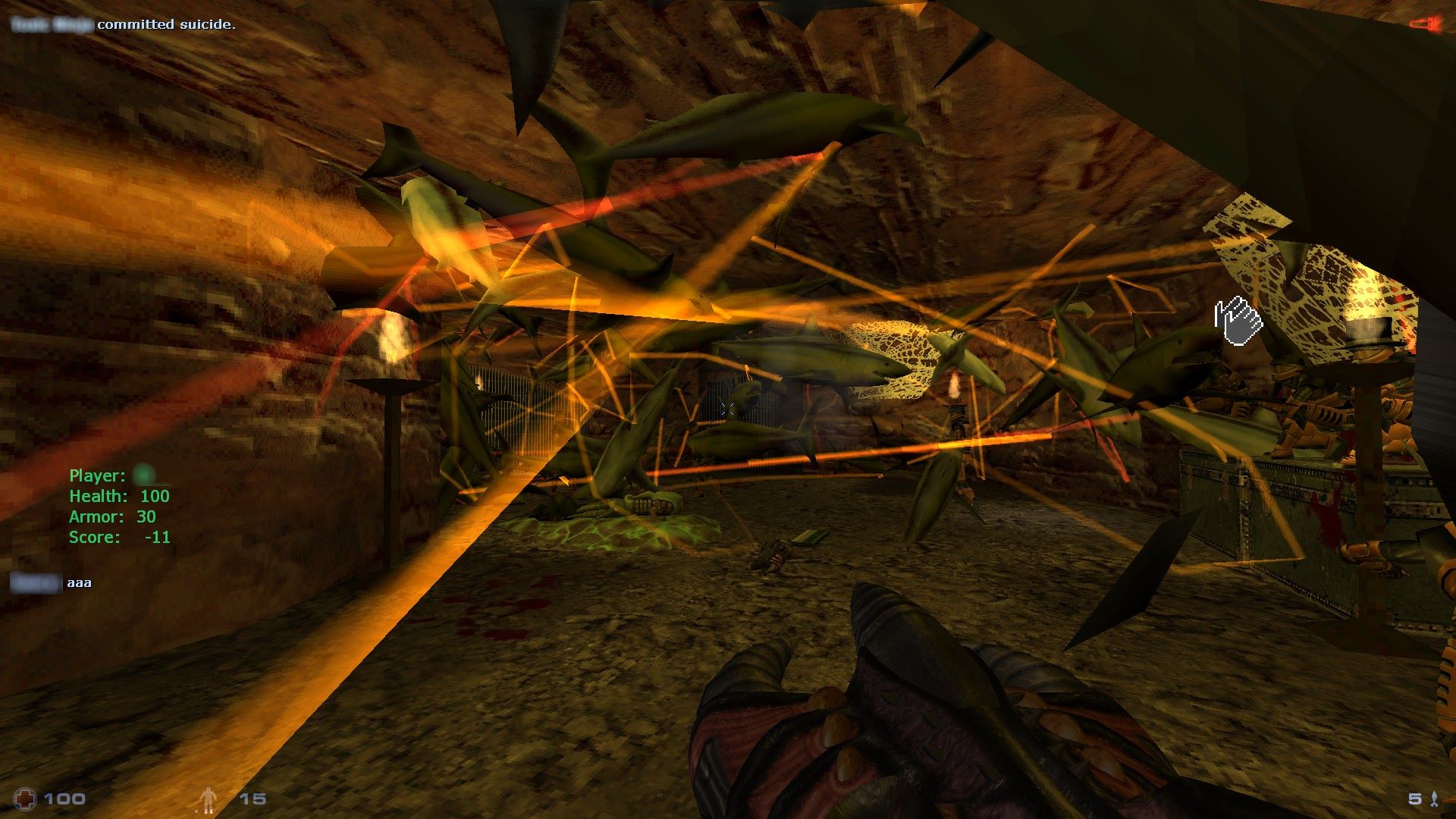 It all culminated in... this strange light show. Either the map's scripting broke, or none of us cared to figure out the way to proceed. A dozen Gordons trapped in a small cave, until one of us realised that the alien bee gun now launched sharks. Before you knew it, the entire world became a buzzing, deafening cacophony of large fish, twitching and cavorting through the air. Nobody seemed to mind - some players laughed, some screamed, but none tried to escape their shark-filled fate. Caught up in the toothsome pageantry of it all, I equipped my own hive-hand and sprayed my own set of sharks into the air.

And that's the Sven Co-op experience for you; all about the chum(s) you meet along the way. Of course, I omitted a few less successful sorties from this. Some servers seemed almost self-sabotaged - hardcore insta-gib Sven Co-op does not make for a fun time for me. But if you don't like what you find, roll the dice again. The anticipation is half the fun.

Be Good To Your Fellow Gordon

Before you go rampaging across the internet, here's a few general tips for play and etiquette, assuming you're not on too wild or heavily modded a server: 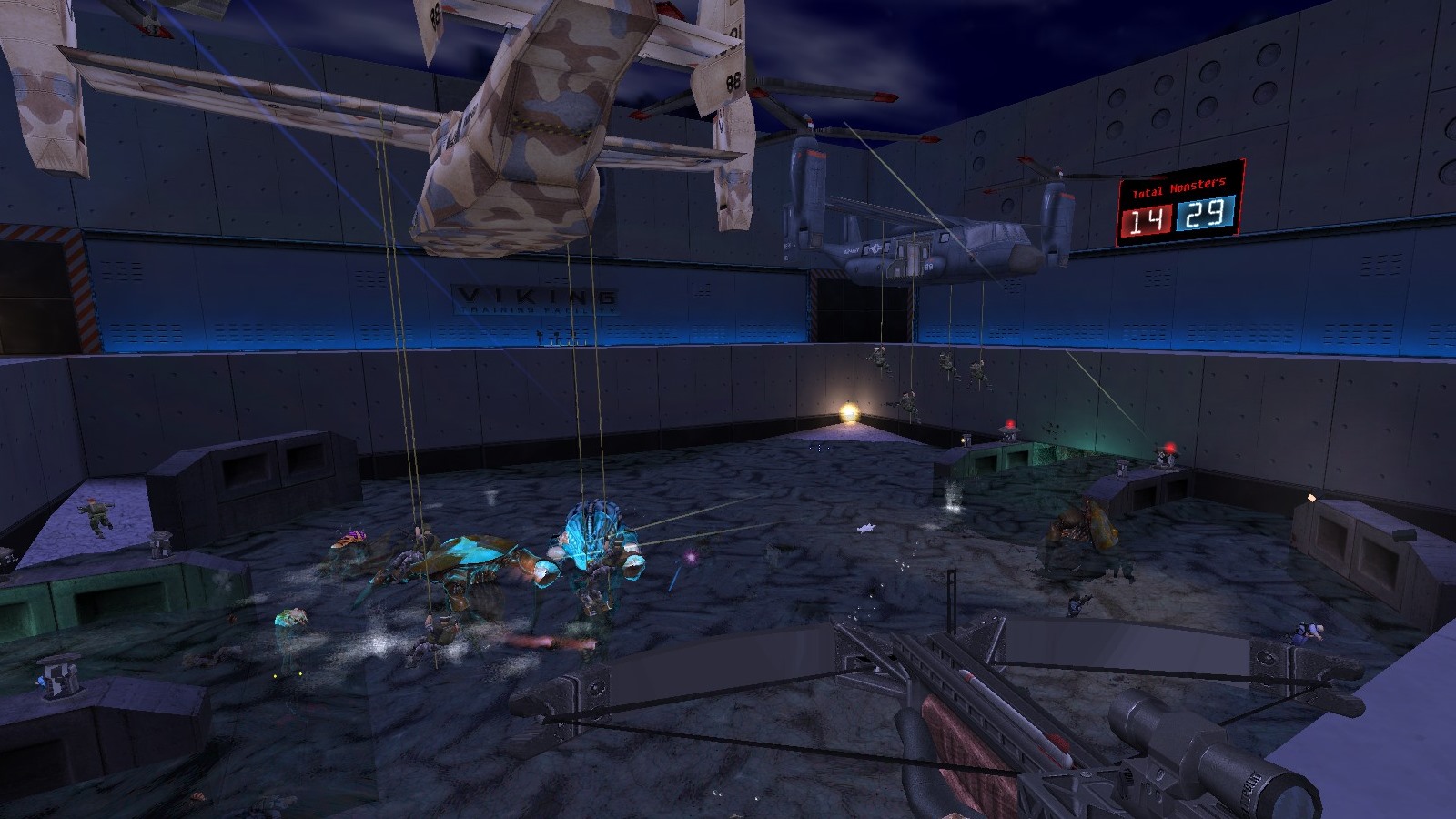 Lastly, if you're wondering why all the pixels are sharp and angular in my screenshots, it's because I changed texture filtering mode, as I never liked smudgy bilinear filtering. If you want your Half-Life (or Sven) to look this way, put the line "gl_texturemode GL_NEAREST_MIPMAP_LINEAR" in your Autoexec.cfg file, overwriting any other gl_texturemode command. If you don't find the file in your Steam\steamapps\common\Sven Co-op\svencoop directory you'll have to create one yourself.

You can grab Sven Co-op free here on Steam, no Half-Life needed. All of these maps (and thousands more) can be found over on the Sven Co-op Map Database. Downloaded maps -- both those you pick and those automatically grabbed from servers -- go in your Steam\steamapps\common\Sven Co-op\svencoop_downloads directory.