I am not myself an Animal Crossing fan (or a "Crossie", as I believe they like to be called), but I know the game is big news at the moment, because approximately the entire rest of the RPS staff have been going on about it. They're all at it, and it's like people talking in a secret language I don't understand. Someone please buy and send me a Switch.

The closest I think I get to playing Animal Crossing is playing Stardew Valley. This isn't a bad trade off, because Stardew Valley is very good, and appears on lots of our bestest best lists (like best RPGs, best management games, and best co-op games). But in the spirit of inquiry, I have been investigating mods which make Stardew Valley feel more like Animal Crossing. Spoilers: you can't do anything very drastic. I'm not about to reveal a total conversion mod, here. But you can make a couple of small but significant changes.

Part of my process involved finding out what Animal Crossing is actually like, so I tried researching amongst my colleagues, but got stuck for a long time on understanding the hierarchy of fruit in the game. What fruit you get to start with is apparently as monstrously important as it is totally meaningless.

Anyway, from what I gather, Stardew Valley and Animal Crossing already have a lot of overlap in that both games involve farming, repetitive chores, and lovebombing people with produce until they're your friends. Both games fulfil approximately the same mighty need. One big difference, however, is that time in Animal Crossing is measured out according to an accurate 24 hour clock, so if it's 11:20 am in real life, that's what time it is in your AC town, and it'll take 10 actual minutes until it's 11:30. In Stardew Valley, meanwhile, a day is about 17 minutes, and you can only stay up until 2am anyway.

There are a couple of mods which put Stardew Valley onto an accurate, 24 hour clock, although some are now out of date. There's the simple enough Real Time, for example, although I prefer TimeSpeed (and going by the downloads, so do loads of others) because it comes with a time freeze function, and you can also speed up and slow down time at your whim.

The second big difference is that in Stardew Valley, you can only save by hauling ass all the way back to your house in order to get into bed and have a sleep. You can basically only close the game after playing out a full day, or progress will reset to the start of the most recent day when you load the game again. This makes sense in a game where the days take a quarter of an hour to pass, but especially if you're staring down the barrel of a 24 hour play session, you don't want to have to power through to the end before you can quit. So Save Anywhere is basically essential.

Unfortunately, the mod that whacked the AC music into Stardew Valley got axed for using Nintendo music, but you can use this cool Animal Crossing Music plugin for Chrome to get essentially the same effect. It plays the appropriate music for the right time of day, and Graham and Katharine both rave about it all the time. You just need to turn off the Stardew Valley music and have this bad boy playing in the background.

By the by, if you've not done a lot of modding, or have never modded Stardew Valley before, you should probably first download SMAPI, which is a very simple to use, very compatible mod loader for Stardew Valley. It comes with very comprehensive instructions, and the creator, Pathoschild, even has a list of recommended mods for a first playthrough. 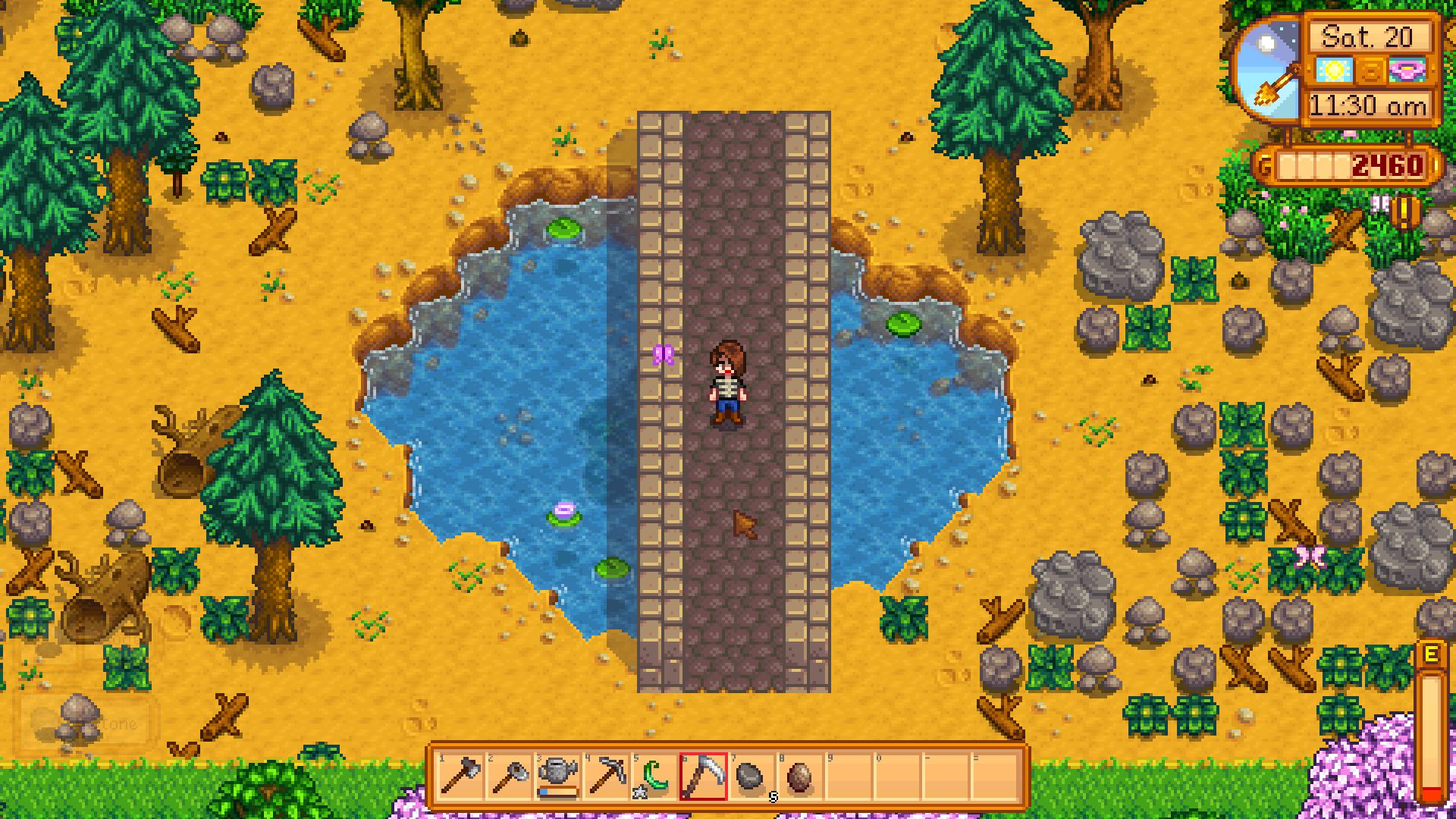 I'd also suggest Simple Crop Label, which is great if you're not able to identify crops just by looking at the seeds. But probably my favourite of Pathoschild's recommended mods is the Stone Bridge Over Pond mod. It whacks a big ol' bridge over the pond at the bottom of your farm, which may be less picturesque, but does make life very slightly easier. And isn't that what intensive farming is all about?

It's worth noting that, while there aren't loads of any stripe, there are other small mods that don't use SMAPI, but add a bit of AC flair to your game. If you're into custom furniture, there's a whole set themed around the New Leaf Mermaid series. This popular one changes the little worms to be found in Stardew Valley into the Animal Crossing digspot marker. And if you feel like it, you can change all the ducks in the game into Scoot. I haven't tested these ones, so I can't say for sure they won't make your PC explode, but they're cute ideas.