I have never watched Narcos, the television program about bad drugsmen with guns being stopped by maybe-not-as-bad lawsmen with guns. After playing the recently-released turn-based tactics 'em up Narcos: Rise Of The Cartel, I have little desire to. I mean, this could be one of those times where TV is all nuanced and considered, while videogames just toss out lines like "pick off those rats one by one until the country is free of vermin," then hope you delight in shooting Colombian gangsters in the face - but I wouldn't bet on it.

In any case, watching the show would only serve to remind me of the miserable few hours I have now spent shooting Colombian gangsters in the face. The main problem (of many) is that you can only boss around one unit on each turn, and I'm struggling to imagine a version of this that works.

The joy of tactical murder, or tactical anything, is about coming up with a cunning plan. XCOM and its imitators shine when you're choreographing a convoluted dance with your units, creating weaknesses to exploit, or strengths to capitalise on. You want your units to (sometimes literally) open doors for each other, firing off abilities in harmonious tandem, and leaving your enemies in disarray. You want to pick apart a web of interlocking foes, dismantling their plots with your own. None of this happens in Rise Of The Cartels. 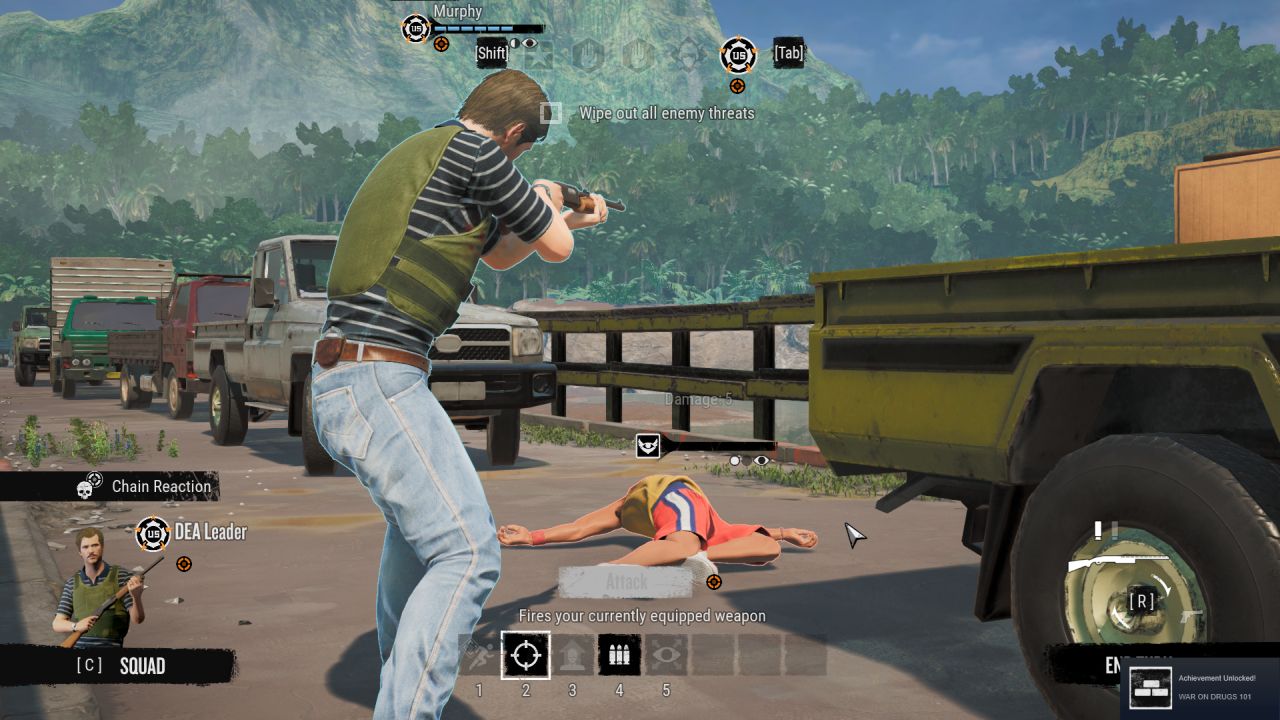 You load into each mission with a squad of five, but most of your units are baggage. That's because on each turn you only get to move one cop about, then take a shot with him. He'll then get shot at, probably at point blank range because the enemy AI has a habit of simply running right up to you no matter how dead this is likely to make them on the following turn. Usually, you'll make sure the cop you send in is the one with a high-damage shotgun who gets a free action with every kill. That means the only decision for your next turn is whether to tough it out, or whether to retreat, and that decision is a trivial one. You know your cop is only going to get shot at once, so survival is easy to calculate.

There is one complication. You can stack up Vigilance points by not moving or shooting on your turn, which let you take a reaction shot at any enemy that subsequently moves within range. It's not much of a complication. So far, I haven't encountered any missions that have pressured me into doing anything except stacking up those points while the enemy dithers about. The enemy does get to be vigilant too, but the cumulative threat is always so readable this barely matters. Now that I've upgraded my shotgun dude with an ability that lets him move without triggering enemy vigilance, it's pretty much irrelevant. 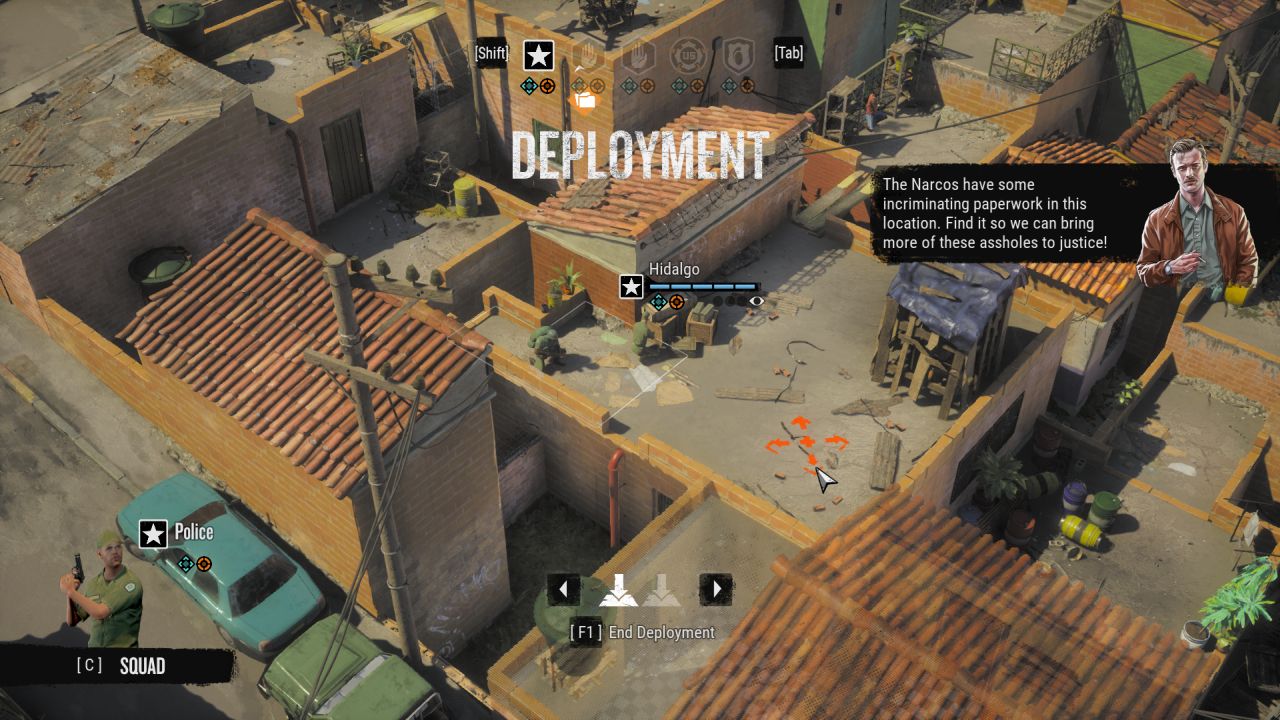 Cartels wouldn't be a good game without the one-unit-at-a-time restriction, but I reckon it would instantly transform into a better one. The restriction makes peril too predictable, and planning too pointless. There's no puzzle to dismantle, only a near-binary choice over whether to shoot back or run away once you've moved your guy in. This approach may set Cartels apart from other turn-based tacticals, but it also sends it to the bottom of the pile.

I think the only way this could work would be to bake a lot more complexity into a single super unit. They'd need to be less restricted, with access to half a dozen or more abilities, and the ability to use more than one of them on each turn. Enemies would need to be similarly fiddly, or else able to gang up on you during their turn.

Come to think of it, that's exactly what I want. Though at that point the whole Cartels vs DEA thing wouldn't really fit, so it would be better to turn me into RoboCop or something. 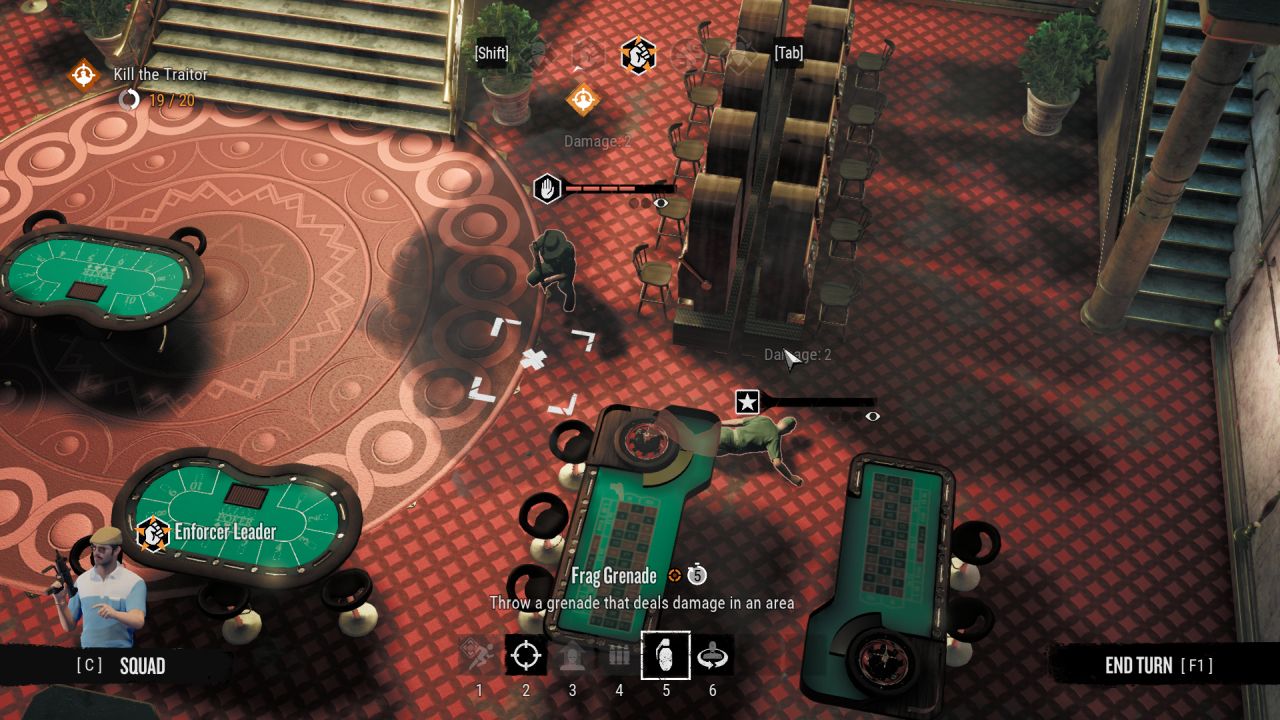 I'm aware it might not be entirely fair for me to get frustrated at a game based on a TV series' questionable representation of Colombian corruption for not letting me be RoboCop, but I can't help myself. The one-unit restriction hamstrings a game that could barely stand on its own regardless. I haven't mentioned the janky cutscenes, or the turns where I briefly left shotgun cop alone and simply fired grenades at enemies who thought staying still and healing one health per turn would save them. Or how I've repeatedly had identical maps inflicted on me, despite only playing for a few hours.

I'm cranking up the metaphor. Cartels isn't barely standing: it's face down in a ditch.