Operation Overlord's rising tide is lapping against the ivied walls of the hotel in the centre of Caent. Though every room is occupied and the sign on the door clearly says “COMPLET” the British seem determined to stay there. Perhaps a blizzard of Maschinenpistole fire laced with the odd Stielhandgranate will persuade them to look elsewhere for accommodation. 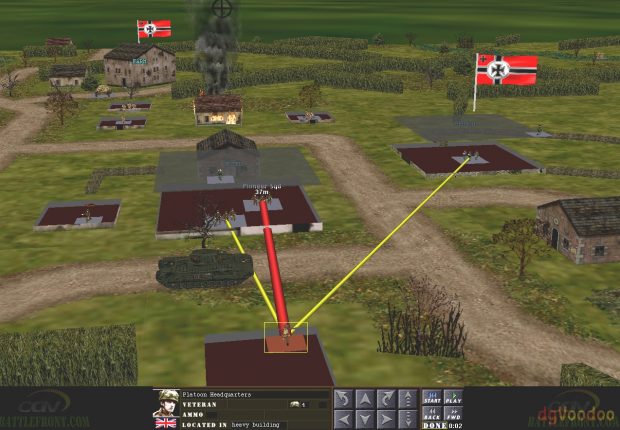 The Axis infantry occupying the hotel and church make their sedentary intentions clear from the outset of Turn 12. Within seconds the four-man platoon HQ leading the Allied advance finds itself locked in an extremely lopsided firefight with three German squads. Against the odds (26:4) the first combatant to slump to the ground clutches an MP 40 and wears Erbsenmuster. 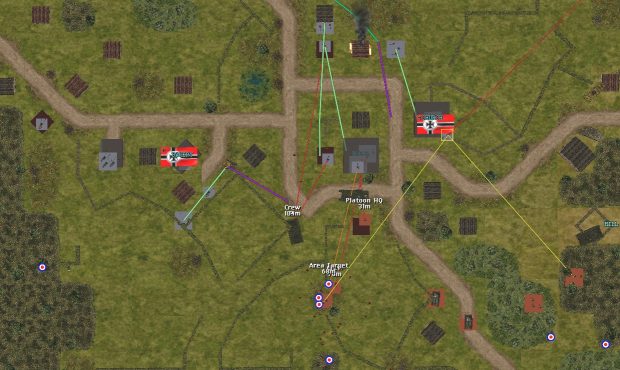 Meanwhile, just to the east of the hotel, the Comment Commanders, CM's AI, and Fate are working hard to engineer a meeting between the Hetzer and the Wasp flamethrower. With both vehicles heading in the direction of the village centre, an encounter seems inevitable. 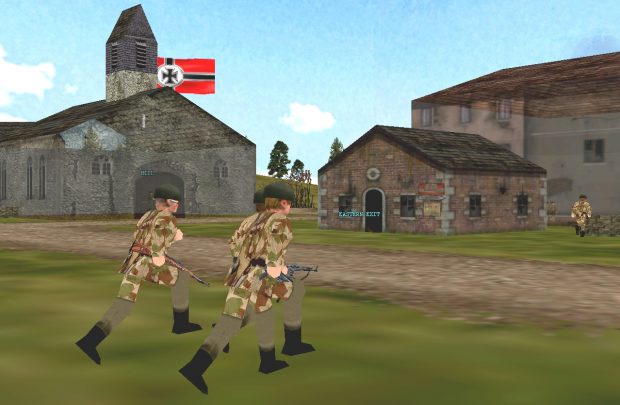 ...two PIAT teams, one on each side of the Allied thrust, come under withering fire... 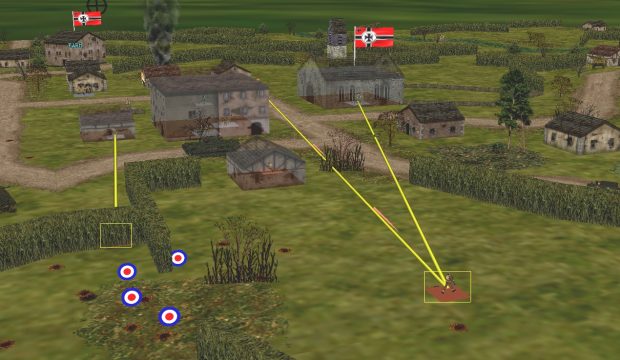 …and the Hetzer and Wasp edge ever closer. 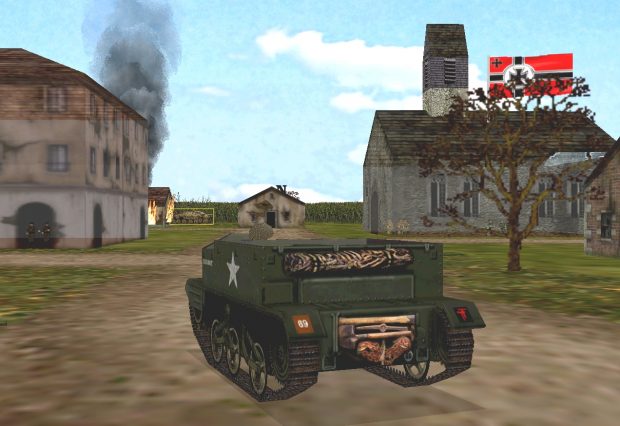 Something – a glimpse of Jagdpanzer 38 ahead or a Panzerfaust protruding from the hotel or church – spooks the Wasp at T+39 seconds and the diminutive fire-breather commences a smart reversing manoeuvre.

At T+45 the hard-fighting British HQ at k19 sustains its first casualty and a smoke round or grenade begins spewing LoS poison at l21. 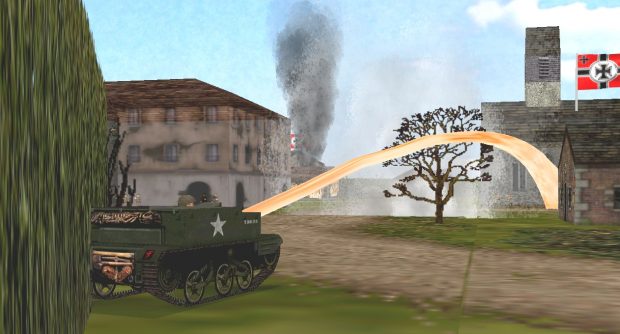 Screened by the smoke and with its exhaust blackening bocage foliage behind it, the British dragon lets rip. For a few seconds Wasp and church are joined by an incandescent arc. The torrent of flame cascades through roof holes and shattered stained glass. Wodtke jumps for a bell rope as, below him, the fire swiftly takes hold.

The situation at the end of turn 12: 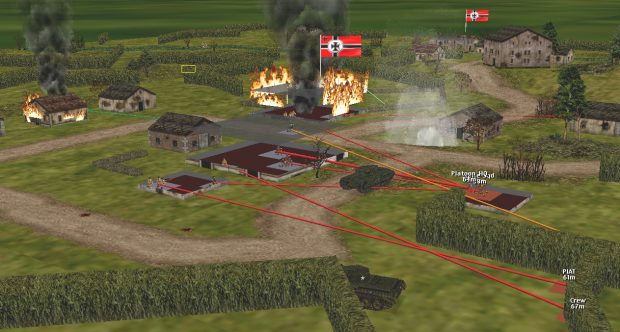 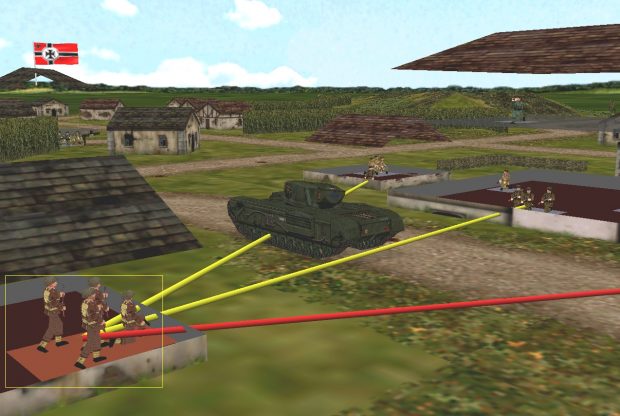 The charmed British platoon HQ has just been joined by an eight-man rifle squad who appear to be on the verge of charging the hotel.

His field of view hampered by smoke Brenner being Brenner has decided to customise his orders. The self-willed Hetzer has added a few extra sections to its hunt order.

Although thus far only Wodtke has chosen to quit the burning church, if left to their own devices, I suspect the rest of the congregation will quickly follow suit. 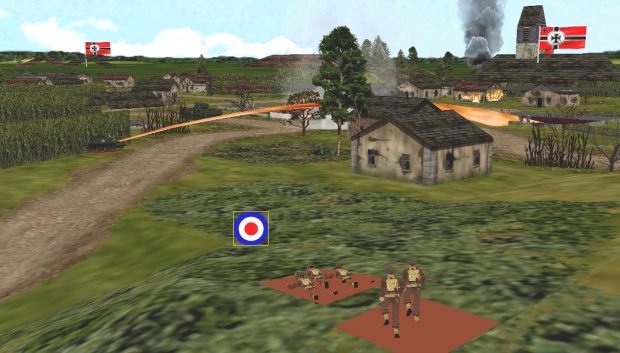 A development that will doubtless please the three Allied squads approaching Caent from the SE (o17). 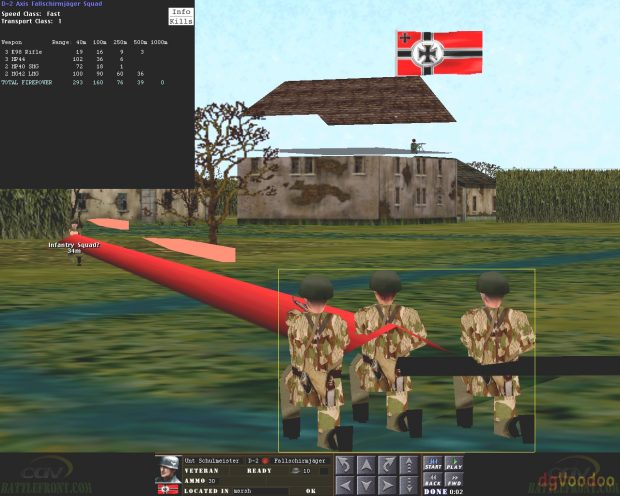 On the eastern and western map edges, things are quiet. At T+3 the FJ squad by the stream eliminated the American stragglers. Nerbul's men near the bakery spent the turn observing a lone (?) British squad picking its way through the pine trees circa a19. 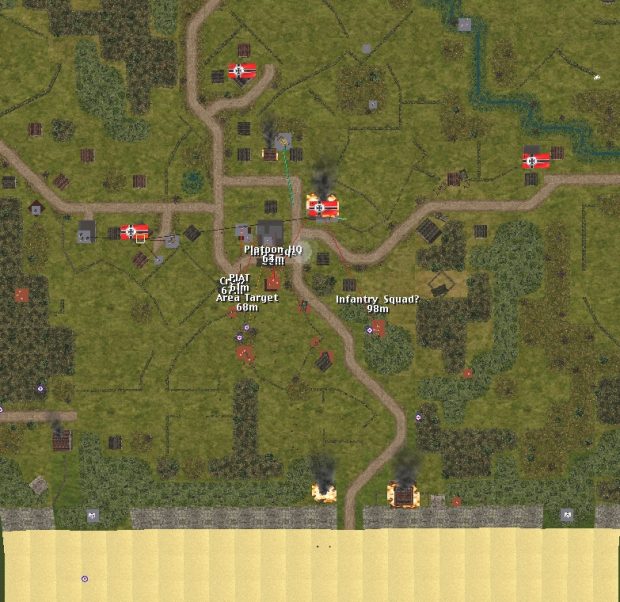