Outnumbered and facing fearsome Allied siege engines like the Churchill AVRE and Wasp flamethrower, Caent's dwindling band of German defenders is beginning to give ground. Or perhaps “relinquish ground” would be more accurate. The behaviour of our forces during the last couple of turns has been anything but acquiescent.

As British infantry bundle through the backdoor of the maison at d21, German infantry - still reeling from the effects of an AVRE attack - flee through the front door. 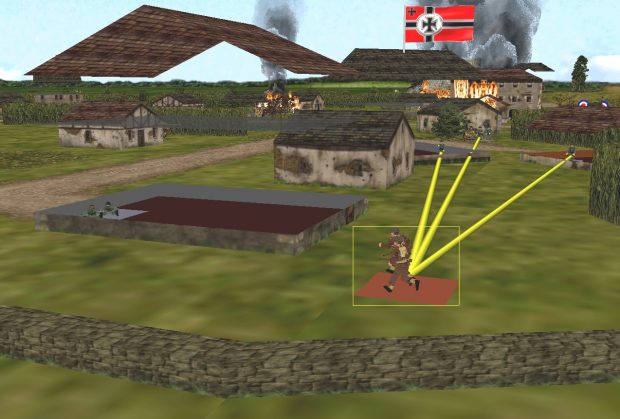 The retreating rifle squad is one of three units heading towards f23 in the early stages of Turn 17. At T+20 seconds, caressing the sands near the western beach exit with its crisp cruciform shadow, the fleetest of this trio, an RAF Typhoon, commences a blink-and-you'd-miss-it South-North bomb run. 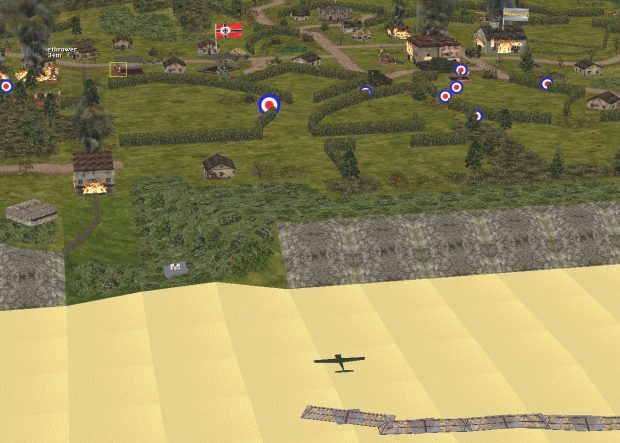 By the time the shout of “Jabo!” goes up, H.E. is already on its way down. The first bomb decimates the pretty clifftop bungalow at e13... 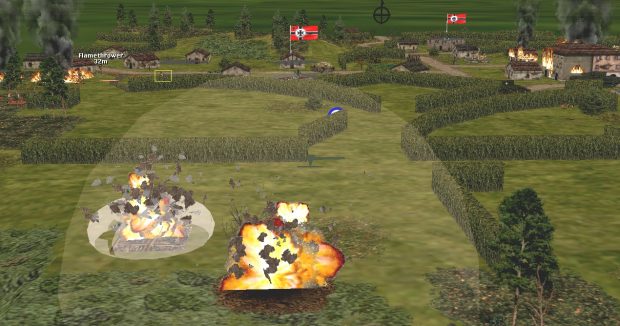 The second plunges towards our Hetzer and the bakery but overshoots, erasing the dwelling at f23 instead. Two of the AVRE-attack survivors, their luck reservoirs drained during the previous turn, are struck and killed by flying debris... 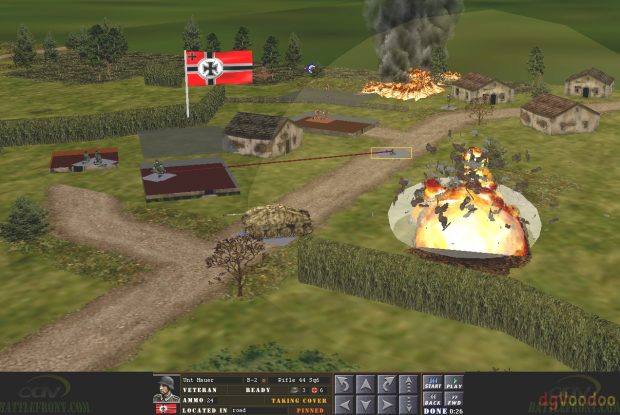 Gruber takes advantage of the pandemonium to begin his desperate attack on d21. Within seconds he's receiving fire from multiple sources. 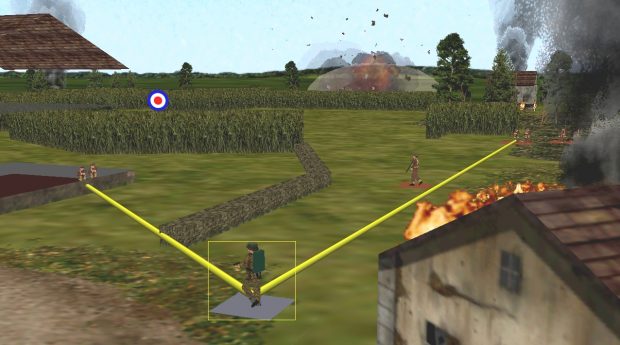 As he stumbles towards the scant cover of roadside trees at c22, bullets pluck at his smock and glance off his helmet and the deadly apparatus strapped to his sweat-drenched back. Common sense says he can't succeed - not in the face of that horrendous grenade-laced lead storm – but in Caent there's no such word as can't.

The two-storey house with the gaping hole in its south facade is well ablaze by the time British bullets finally fell our fearless firestarter. 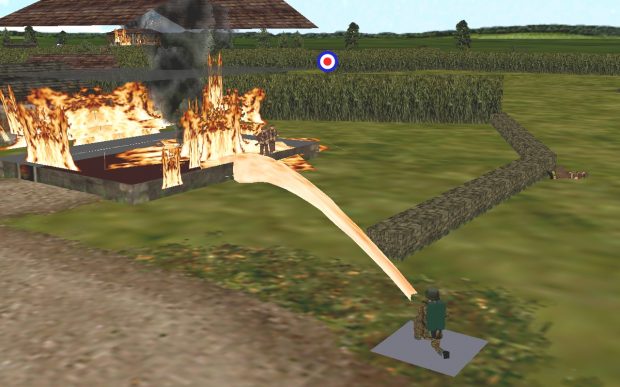 As predicted, Stein's killers see little of Turn 17. Once Teichert's FJ squad have neutralised the closest infantry threat, they turn on the remnants occupying Larcher's cottage and deal with them with equal efficiency. 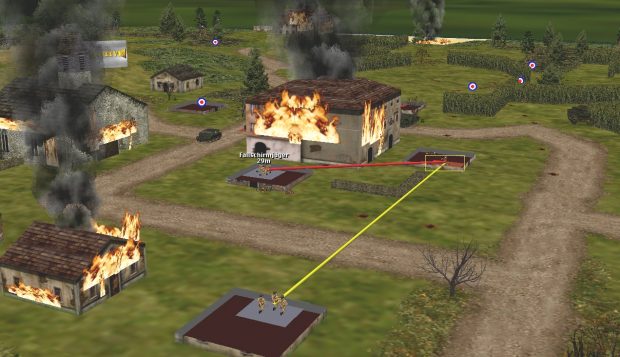 Aware, perhaps, that the Brits behind the hotel are struggling, the Wasp attempts to offer support. Sheaffer, our Panzerschreck pointer, is moving to cover when the Allied arsonist presents itself.

By the time he levels his length of Dunkelgelb-coloured stovepipe, the unnerved Wasp is rolling back the way it came. Has Sheaffer left it too late again? 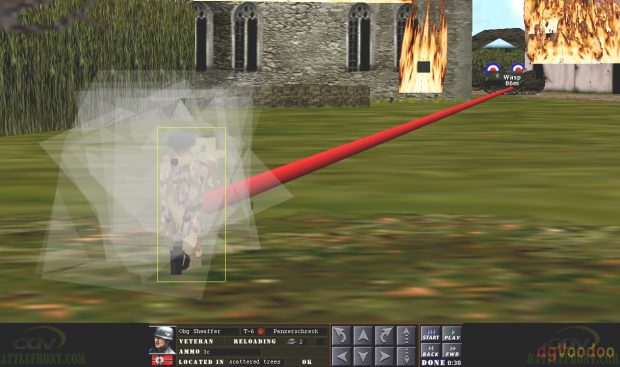 When the turn ends the battlefield looks like this: 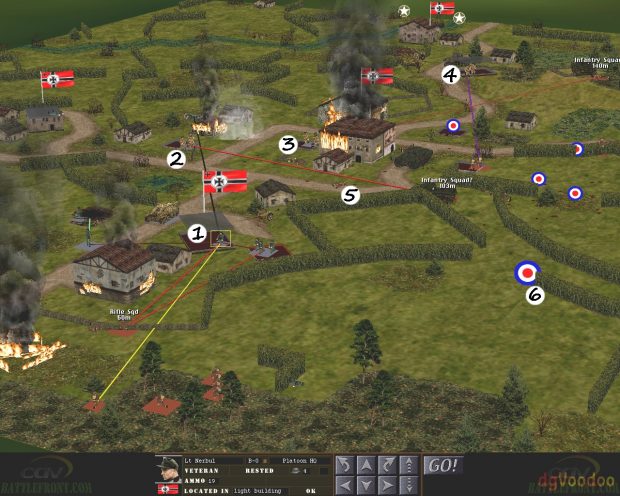 1) The bakery has been under two-inch mortar fire for the past ten seconds or so. The bombs have yet to cause any casualties.

2) & 3) The FJ squads behind the hotel are essentially intact and have ample supplies of ammo.

4) The paratroopers at q21 are 'cautious' and down to seven men but appear to be holding their own. 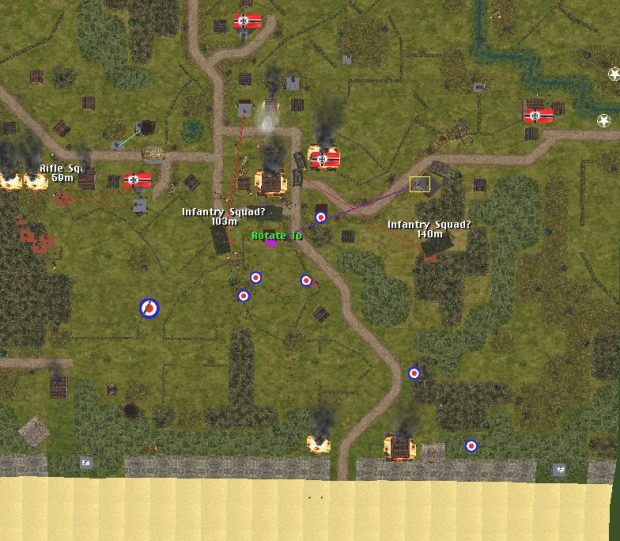