Of all the German units involved in this turn's tussling, none makes a more valuable contribution to our questionable cause than the PSW armoured car.

Which is a trifle odd considering the PSW was slain by a Stuart back in Turn 6.

The Allied assault might be stalling in the centre, but in the west it's as lively as ever. Their strength slashed by concentrated rifle, SMG, and LMG fire (The weapons filling f20 with muzzle smoke include a bipod-supported MG 42) the squad of Tommies leading the bakery bid finally run out of courage and momentum when one of their number is felled by a close-range Walther P38 shot at T+8 seconds. 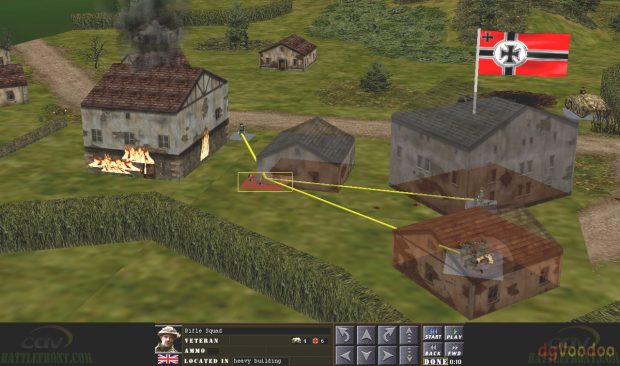 A pell-mell diversion into the stone house at e21 only delays the British unit's disintegration by half a minute or so. Just one of the retreaters makes it as far as the bocage to the south, and he's cut down as he struggles to forge a path through the green wall. 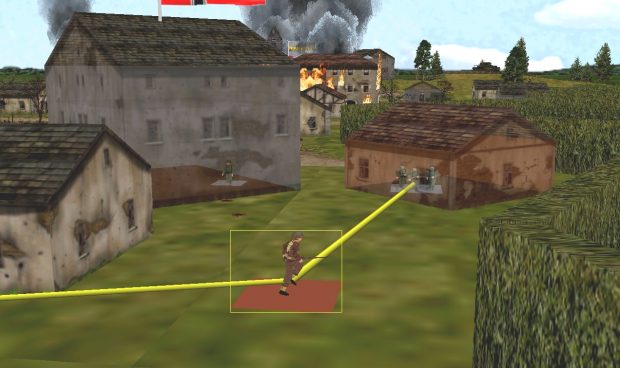 Nerbul uses the lull to tend and reassure a nearby German casualty who, beyond medical help, slips away at roughly the same moment the Hawker Typhoon sideslips into its third pass.

Clearly unaware that the pair of Axis AFVs loitering near the mill are hors de combat, this time the Allied air warrior decides to point his Hispanos at the wreck of our PSW armoured car. As cannon shells hammer irrelevant steel... 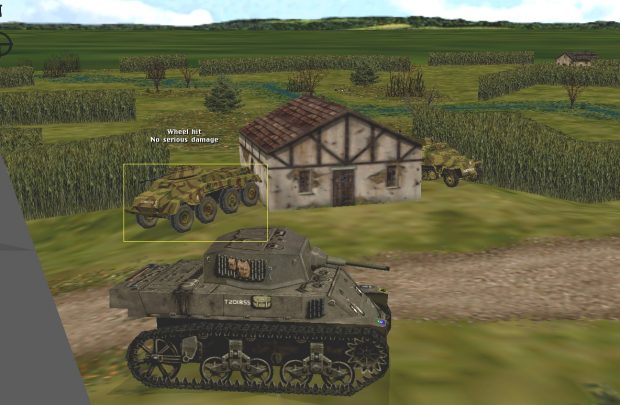 ...two hundred metres away to the west, Brenner surveys the devastation around the hotel with his customary nonchalance, totally unaware that he has just cheated death-from-above for a third time... 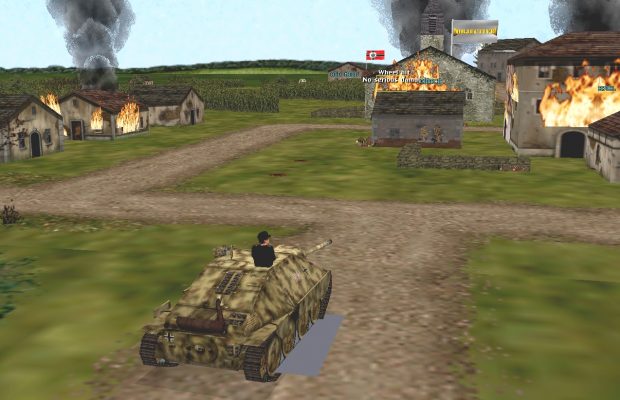 At T+51 seconds, Fate contemplates shifting her favour to a more deserving/appreciative mortal, but ultimately decides to stick with the devil she knows. Bold-as-brass Brenner gets to descend into the interior of his Hetzer when the repositioned TD starts drawing fire from k19. 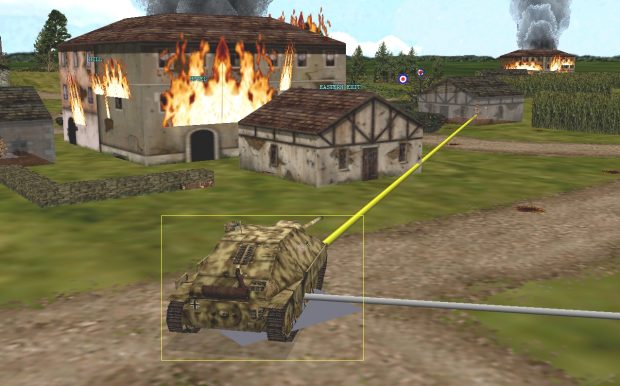 Other Turn 19 events of note:

Wodtke expended the last of his ammunition firing at targets in West Wood. It was impossible to tell what effect the shots had.

Both the peripatetic Panzerschreck team and Bulau's FJ squad (who still carry two Panzerfausts) came under fire whilest moving during this action phase, but took no casualties. 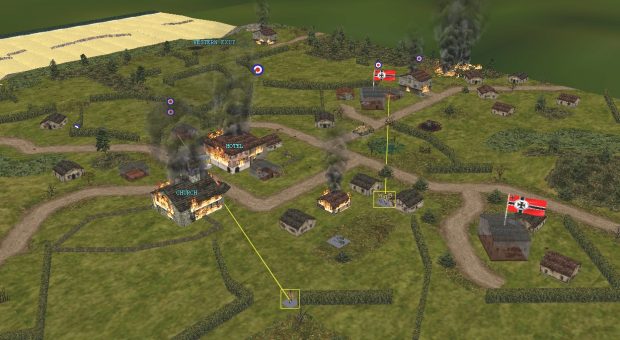 Schulmeister's FJ squad was less fortunate. A Green Devil crumpled during the room shift at q21. True, the death was quickly avenged. From its new safer (?) position, our most easterly combat unit spotted US paratroopers sneaking into the mill and opened up, inflicting two casualties almost immediately. 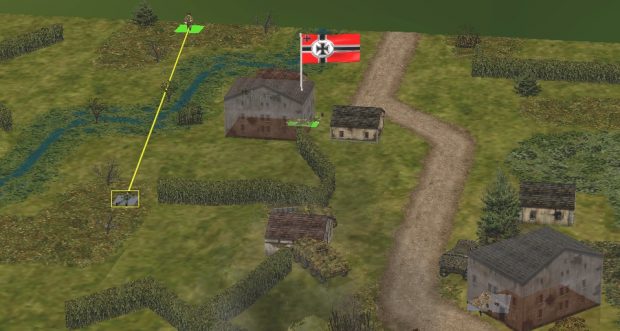 At the start of Overlordy's final turn the victory percentages stand at AXIS 63%, ALLIED 33%, and the battlefield looks like this: 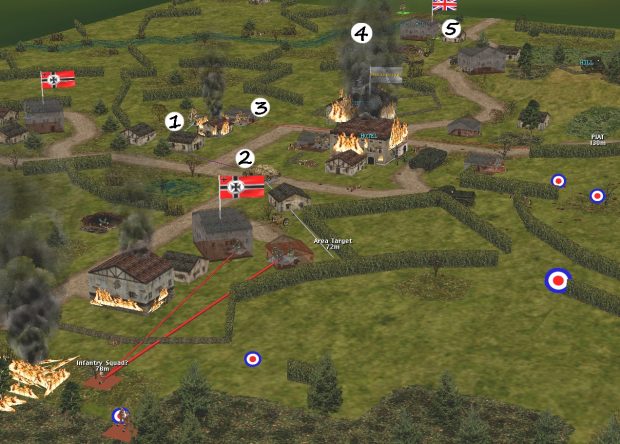 1) Panzerschreck team (weary).
2) The Hetzer will need to reverse in order to execute its smoke shell order.
3) Bulau's squad has been harassing a PIAT team since arriving at l24.
4) The PSW crew was spotted and engaged  by the northerly US squad during the turn.
5) Eight US paratroops now occupy the mill. 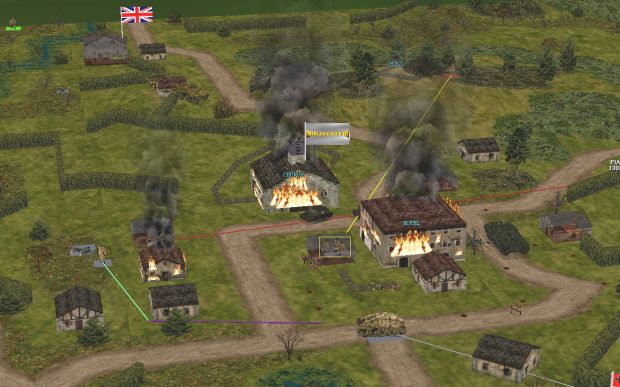 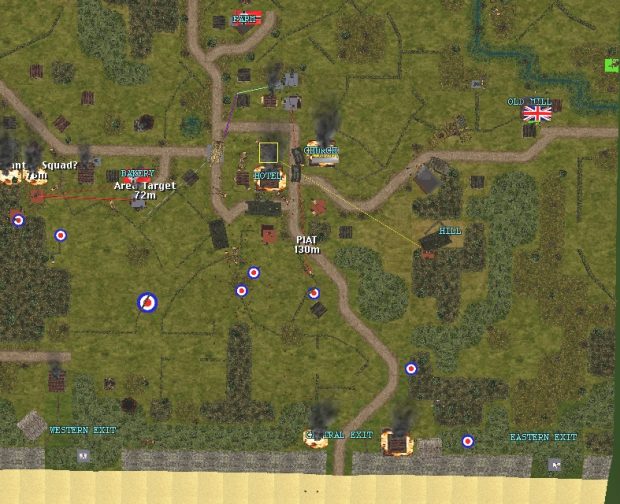