A recurring problem I've had with HDR gaming monitors lately is that they don't seem to be able to do HDR levels of brightness at the same time as HDR levels of colour. Whether it's the ludicrously expensive Nvidia G-Sync HDR-enabled Acer Predator X27 or the cheap as chips BenQ EW277HDR, there's always been some sort of compromise involved. Sometimes it's due to a limitation in the hardware - the BenQ's maximum brightness simply isn't as high as the Acer's, for example - but other times it feels like you're wrestling with a naughty child (or cat, whichever you prefer) that flatout refuses to do what it's told, making it even more frustrating when you happened to have paid through the nose for it.

The beautifully parsable and succinctly-named Philips 276E9QJAB isn't an HDR monitor per se, but at least it's upfront about what it's trying to achieve. Instead of setting itself up for disappointment by jumping on the same HDR bandwagon as everyone else, Philips describe this 27in, 1920x1080, 75Hz FreeSync screen as an 'ultra wide colour' display, and man alive is it WIDE.

Admittedly, my first impressions weren't brilliant. Using its default, out of the box settings, the 276E9QJAB's IPS panel was only showing a mediocre 91.3% of the regular sRGB colour gamut, according to my X-Rite i1 DisplayPro calibrator, and 78.6% of the wider (and HDR-grade) DCI-P3 gamut. That's not terrible considering it only costs £160 (US pricing to be confirmed), but it's not exactly what I'd call 'ultra wide colour' either.

I saw similar results across the monitor's various other colour temperature settings as well, with its customisable User settings actually producing even worse figures after calibration. I also wasn't overly impressed with its high black level of 0.63cd/m2 (the closer to 0.00cd/m2, the better), or its contrast ratio of just 427:1 either, both of which are pretty sub-par even for budget monitors like this one. Its maximum brightness was fairly average, too, settling around the 270cd/m2 mark for the most part (although I did see it rise to 330cd/m2 when I was fiddling about with some of its other settings), but this is still more than enough for everyday use unless you happen to be sitting right next to a very sunlit windows. Then you might struggle a bit.

When I switched on one of its SmartImage Game modes, however, KAPOW. That wide colour coverage came crashing in like a bolt from the blue. Instant vibrancy with none of the fuss.

Admittedly, purists may well think Philips' SmartImage modes look unnaturally oversaturated for the most part, and I would agree that the fizzing intensity they bring to colours is probably a bit strong for everyday web browsing and the like. In games, however, hoo boy do they give them some pop.

The effect is largely artificial, as measuring the two best-looking SmartImage modes out of the available six (FPS and Gamer 1, in my books) with my i1 DisplayPro again saw minimal gains to the monitor's overall gamut coverage. FPS came in at a mildly superior 91.7% sRGB coverage, but Gamer 1's sRGB score only managed 90.5%. I did see a very small increase in the 276E9QJAB's DCI-P3 coverage, rising from 78% to 80% in both modes, but that's still a good 10% lower than what you'll find on proper HDR screens.

However, I was so impressed by the richness of FPS and Gamer 1 modes brought to proceedings that, subjectively, I'd even go as far as saying they look nigh on identical to what you'd get on one of Nvidia's fancy pants G-Sync HDR monitors. Indeed, I've actually got the Asus ROG Swift PG27UQ back in for additional testing at the moment, and hot damn does the 276E9QJAB do one heck of an impersonation of a two grand gaming display. The 276E9QJAB is, in truth, probably still a touch oversaturated compared to the PG27UQ, but at this price I'm hardly complaining.

When I booted up my favourite Assassin's Creed Odyssey sunrise scene, for example, the 276E9QJAB bathed the screen in the same warm glow of pinks and purples as I saw on both the Asus PG27UQ and Acer Predator X27, flooding Kassandra's red mantle with a warmth and depth that simply wasn't there when I turned SmartImage off. If anything, it looked like Kassandra had suddenly joined the Greek underworld when SmartImage was disabled, as the entire scene looked drained and sapped of life.

That still doesn't excuse the monitor's underwhelming contrast and black levels, which also showed no improvement with SmartImage switched on, but for me it certainly goes a long way to help elevate the 276E9QJAB above other 27in monitors in this particular price range.

There are still a couple of other niggles I have with this monitor, such as its awkwardly placed four-way control/power button on the back of the monitor (which is located behind the central Philips logo instead of the actual power LED, requiring the shifting of keyboards and other potential peripherals on your desk to access instead of simply being able to reach round the side) and its fixed stand, but they're pretty small in the grand scheme of things.

More concerning is its 1920x1080 resolution. Just like every other 27in monitor with this number of pixels, this is the absolute limit to what I'd consider an acceptable pixel density. It won't be much of a problem if all you're going to be using it for is playing games, but those of you hoping to also spend a fair bit of time doing some work on it or reading many of the fine words on this here website may find it a little grating on the old eyeballs. Text is just about sharp enough to not be a bother in my books, but desktop icons can sometimes look a little fuzzy around the edges. Ultimately, it's the price you pay for such a cheap screen, but it's worth taking into consideration if you prefer your monitors looking a tad more defined. 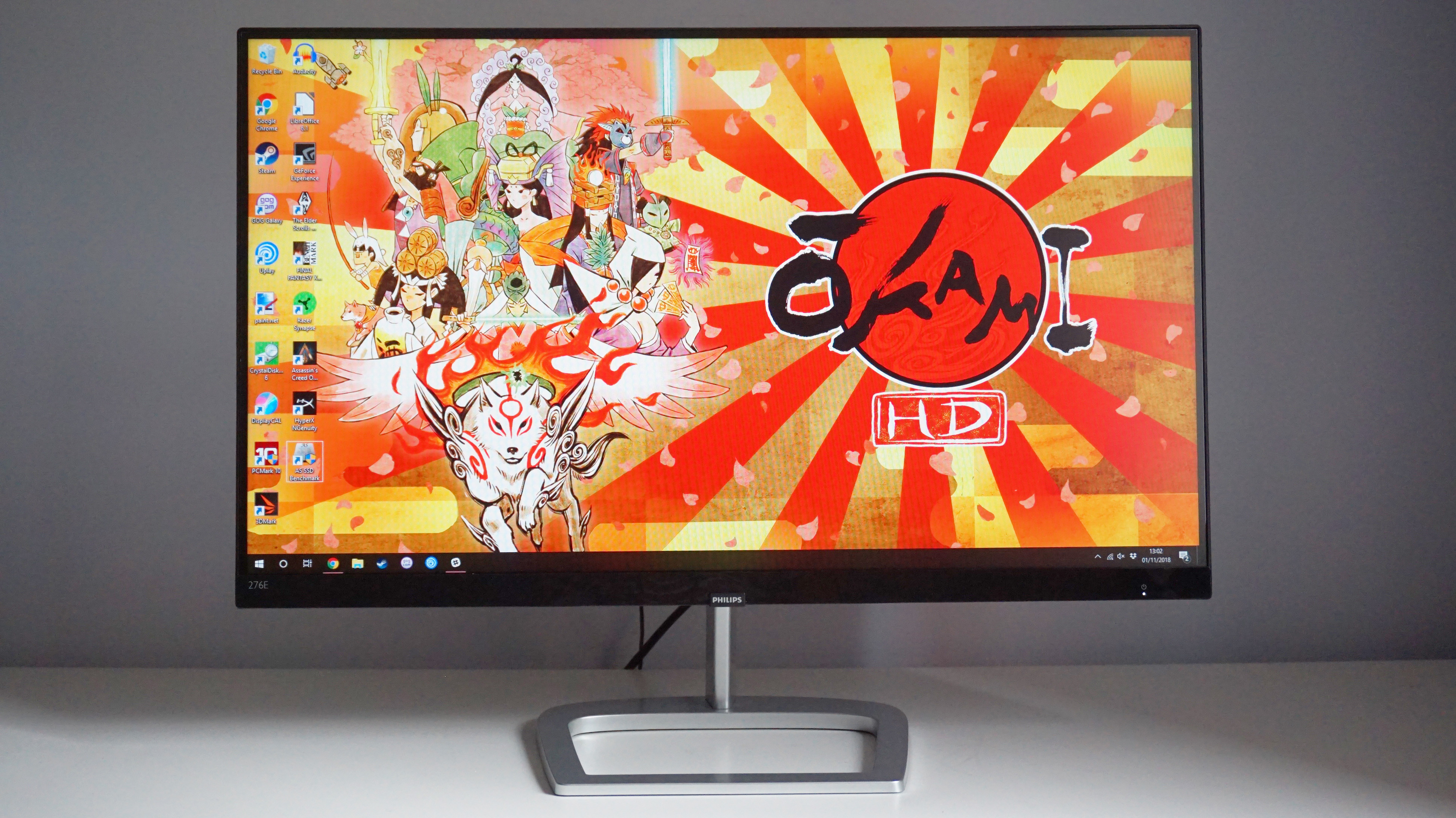 Still, provided you're all right with the resolution, the Philips 276E9QJAB is a fine budget monitor overall. While its technical figures aren't much to write home about, Philips' SmartImage tech gives you that wonderful HDR-like effect without any of the hassle normally associated with HDR screens, and your games look all the better for it. For me, this saves the 276E9QJAB from becoming just another average budget monitor, and the fact it costs just £160 makes it a very tempting proposition indeed.

I also like you get the added bonus of AMD's adaptive frame rate FreeSync tech plus an elevated 75Hz refresh rate for higher frame rate gaming without having to put up with any of the go-faster gaming stripes you normally find on much of the competition. Indeed, with its plain silver stand and tiny black bezels, the 276E9QJAB is arguably one of the more attractive budget monitors I've seen in a while. If you're after a decent gaming monitor that won't embarrass you or cost an absolute fortune, the Philips 276E9QJAB is well worth considering if our current 27in 1080p best gaming monitor winner, the £190 / $200 BenQ EW277HDR, is just beyond your budget.