I don't know about you, but I love having multiple monitors on my desk. Every time I go away and have to work on my tiny 15in laptop screen, I groan inwardly. I mean, how am I meant to check emails, look at product specs, have the RPS team Slack open and do all my writing when I've only got a single 1920x1080 screen at my disposal!? It simply isn't possible.

I joke, obviously, but there's a small part of me that feels the same way when I'm at home in my office, too. I've worked with two monitors for as long as I can remember, and dropping down to one just isn't practical for me anymore. But when you've got something as big as the 40in Philips BDM4037UW stuck on your desk, it makes me think a one monitor work and gaming setup might just be doable.

It helps, of course, that the BDM4037UW has a lovely 4K resolution at its disposal, giving you plenty of space to play with across its huge 40in VA display. I won't lie - I found it quite overwhelming to sit so close to a screen this big at first, and for single window tasks such as web browsing and playing games I often felt like I had to move my chair back a bit in order to drink everything in - especially when you take into account the screen's gentle curvature radius of 3000mm, too.

But it's surprising how quickly you get used to it after a while, and if you're the type of person who likes having multiple windows open at the same time(just think of the spreadsheet potential!), then the BDM4037UW is an absolute delight. As you probably know, a 4K resolution is essentially the same as having four 1920x1080 displays crammed into a single screen, giving you plenty of room to arrange everything on your desktop and still have space leftover (especially if you leave Windows 10's scaling options at 100%). Admittedly, having four windows going in each corner was a little too cluttered for my liking, but I do like being able to look at absolutely everything without having to flip back and forth between different monitors.

Philips have also kitted out the BDM4037UW with a superb VA panel, too - at least when it comes to colour accuracy, that is. Thanks to its 10-bit panel (a lot of regular monitors only have 8-bit panels by comparison), the BDM4037UW has practically perfect picture quality straight out of the box, with my i1 DisplayPro calibrator recording an excellent sRGB coverage score of 97.9% and a DCI-P3 coverage score of 82.4% on its default 6500K colour temperature profile with the brightness set to 100.

The latter is the gamut you often hear associated with HDR displays, with things like Ultra HD Premium TVs being required to hit at least 90% of it. The Philips BDM4037UW isn't an HDR display, but the fact its out-of-the-box DCI-P3 coverage is just 8% off the best HDR screens you can buy today is really quite impressive. That means you get the same vivid and vibrant colours without all the faff of messing around in-game HDR settings.

You can nudge its sRGB coverage up a fraction further by switching over to the BDM4037UW's User Define colour temperature profile, but even then you're only looking at a minor improvement of 98.6%. Its DCI-P3 coverage, meanwhile, stayed exactly the same. As a result, you can pretty much use the BDM4037UW as is from the word go, which is always a plus in my books.

The problem comes when you start looking at its white and black levels. The former is really quite low for a near-£500 display, as its maximum brightness topped out at just 240cd/m2 by my measurements, which is noticeably lower than Philips' own figure of 300cd/m2. Truth be told, that's still more than enough for everyday use, and you'll probably end up straining your eyes working at that kind of level for any length of time. But it doesn't leave a huge amount of leeway for use in bright, sunlit environments or offices with heavy overhead lighting. It also means those lovely rich colours don't sparkle nearly as much as they would on a 300cd/m2 or 400cd/m2 display, and they lose some of their intensity as a result.

I was also disappointed by its relatively high black level of 0.65cd/m2 (the closer to 0.00cd/m2, the better). This meant darker images and scenes in games were altogether lacking in depth and detail, as shadow areas just looked flat and dark grey as opposed to proper black, containing none of the nuance that's normally associated with VA panels. Indeed, I was a bit shocked when my calibrator recorded a contrast ratio of just 366:1, as this is usually the kind of poor contrast I'd expect from a low-end TN panel.

But I could see it in my test images, and I could see it in games such as Little Nightmares. Shadows were dark, sure, but when you're playing in a sunny room with just 240cd/m2 brightness pumping out of its glossy, reflective panel, I really had to squint and look hard to pick out any of the fine detail that's usually visible around the edges of the screen. It wasn't just Little Nightmares I had trouble with either, as my forays into Metro: Last Light and Shadow of the Tomb Raider were met with similar frustrations. 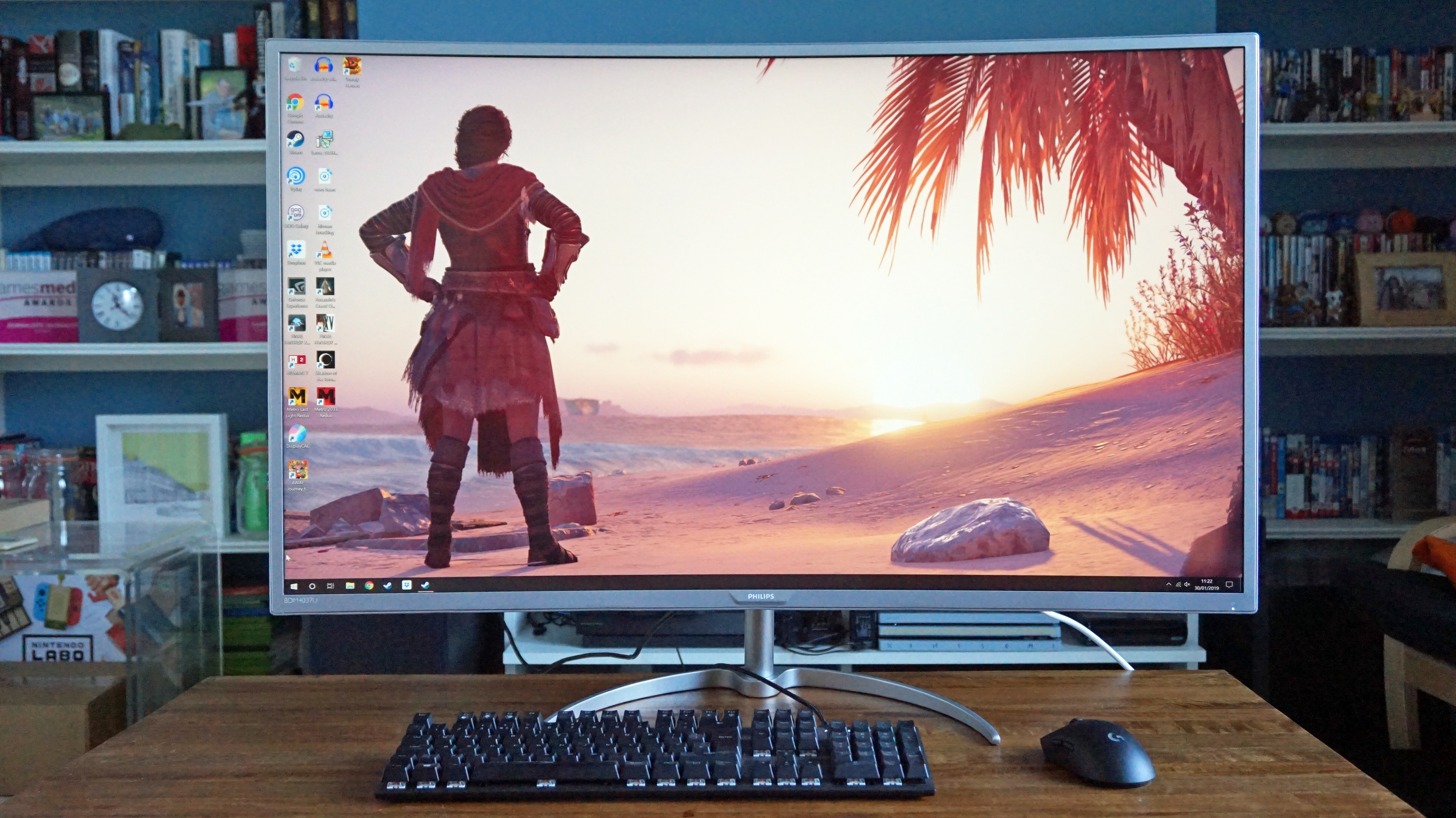 I suspect the screen's light curve isn't doing it any favours in this respect, as tilting my head from side to side produced enough of a shift in contrast that I could in fact see that lost fine detail after all. But no one plays games at a 45 degree angle, and I became increasingly dissatisfied with it as a result. A gaming monitor can have the best colour accuracy in the world, but if I can't damn well see any of it as soon as I move into a cave or shady patch of trees, then what's the point?

It's a real shame, as I was hoping it would be a good, less expensive alternative to the equally large Philips 436M6VBPAB. Alas, while the BDM4037UW excels in some areas, such as general desktop work and office-based multi-tasking, I just don't think it has the chops to be a top class, bestest best gaming monitor.

As a result, any one after a massive 4K screen for work and play should still look to the Philips 436M6VBPAB if you can afford it, as this not only has adaptive sync support for smooth, tear-free gaming, but it's also a proper HDR display that both AMD and Nvidia graphics card owners can take advantage of - which is more than can be said for any other HDR monitor you can buy right now. The Philips BDM4037UW will still do a fine job if all you play are bright, colourful games that never venture into the cold, dark embrace of the night, but the 436M6VBPAB is infinitely more versatile for just a couple of hundred pounds / dollars more.