If you click on a link and make a purchase we may receive a small commission. Read our editorial policy.
Developer: Amanita Desisgn
Publisher: Amanita Design

The surprise announcement of a new Amanita game, while we were all happily waiting for the announced Creaks to appear, is almost certainly to do with the clandestine nature of Apple Arcade. With so many developers sensibly taking advantage of Apple's pouring money tap, and with the exclusivity arrangement extending only to screwing over Android, us PC players are enjoying a sudden windfall of meant-for-telephone games. Since one of these is a bonus Amanita game, then... well, hooray for stupid corporate practices!

Following on from the spellbinding Chuchel, this new little yarn Pilgrims upholds Amanita’s reputation for wonderful art and animation, and for simple, intuitive, non-verbal games. It might perhaps fall a little short, however, of their reputation for exquisite brilliance. And indeed in terms of length. 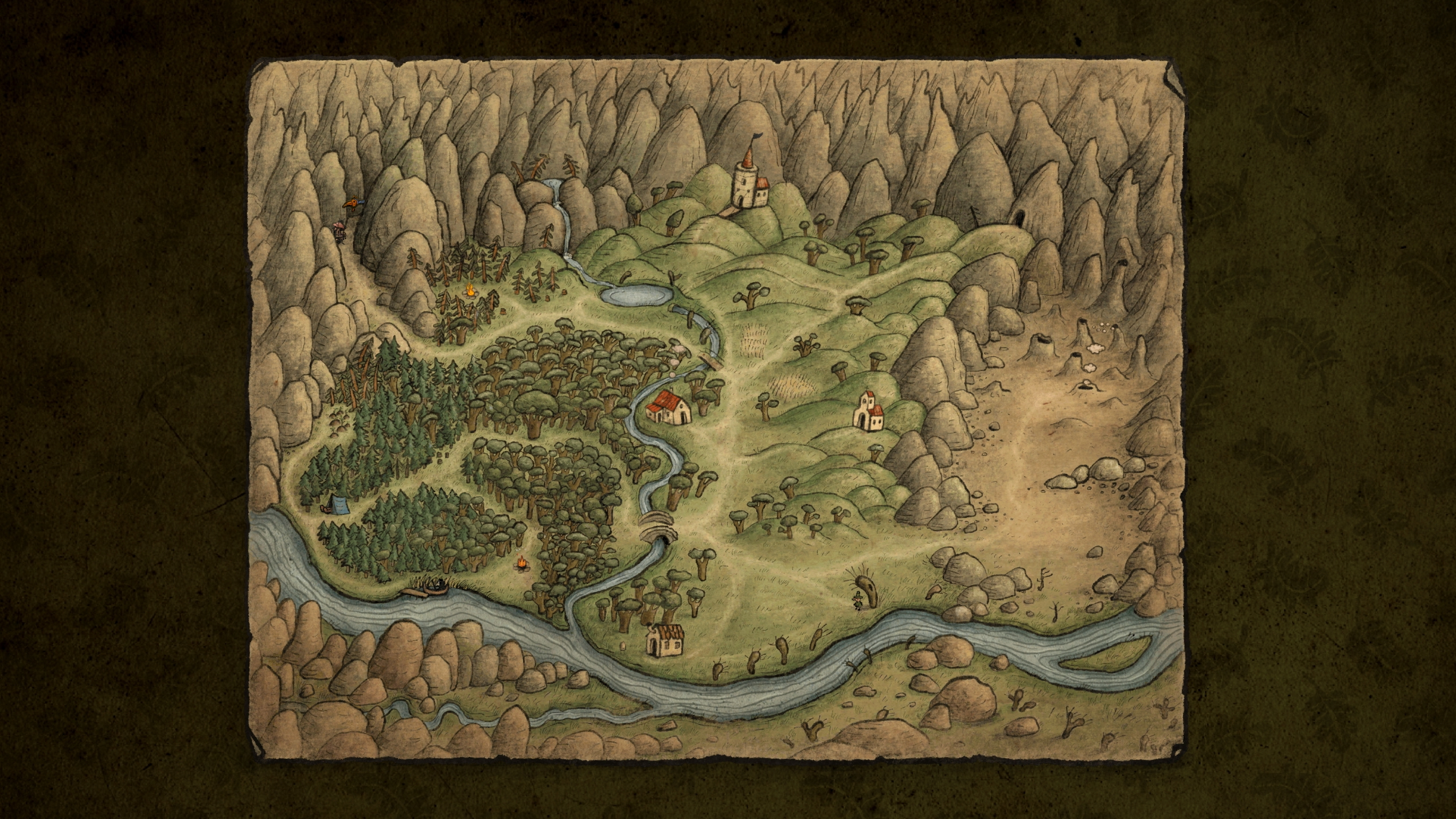 There is an awful lot to like about Pilgrims. After a completely incoherent opening scene featuring a collection of scratchily drawn figures playing a rowdy game of poker, the game proper begins with your first character crawling out of a tent in the middle of the woods. He, it seems, wants to go on a boat ride, but the ferryman won’t take him until he finds a lost bird. And so begins a chain of fetch-me-do puzzles set in a series of locations depicted on a hand-drawn map.

As you progress you pick up items, depicted henceforth as additions to your pack of playing cards, which can be ‘played’ in scenes. Get the acorn and you’ve got an acorn card, which can be dropped onto the screen to see what adding the acorn to this location or character might do. Soon after, you’ll also collect cards representing other characters, who can be played into a scene instead of your initial guy. Which character you play, and which items you use, cause little sketches to play out. There are many situations where multiple solutions are possible, so it pays to experiment, and of course there’s the pleasure of a wrong idea eliciting a funny little skit. This is especially the case when getting everyone drunk.

Those animations are great, looking like paper cut-outs moving on split-pin paper fasteners, and they’re all a pleasure to watch. They’re often very funny, too: crazy-eyed characters losing their minds with rage, hitting each other on the head with blunt objects, or getting comically sozzled. This is where Pilgrims shines. You can try dropping in the little demon character to see how he might interact with the dragon, or the king, or the guy in the inn, differently to how the sad old lady might have done. Perhaps offering the shouty hairy guy the fishing rod here might create a different result to when you tried it with the initial guy?

There were a good few occasions when I laughed out loud at the results of experimenting, although it’s worth noting this was still only a slight fraction of the belly-hurting laughs Chuchel induced. Pilgrims has a different sort of vibe. It reminds me of those bizarre Eastern European cartoons you’d only ever see on BBC 2 when you were off school ill, and then never be quite sure afterwards whether you’d actually watched them, or whether they’d just been part of some fever dream. 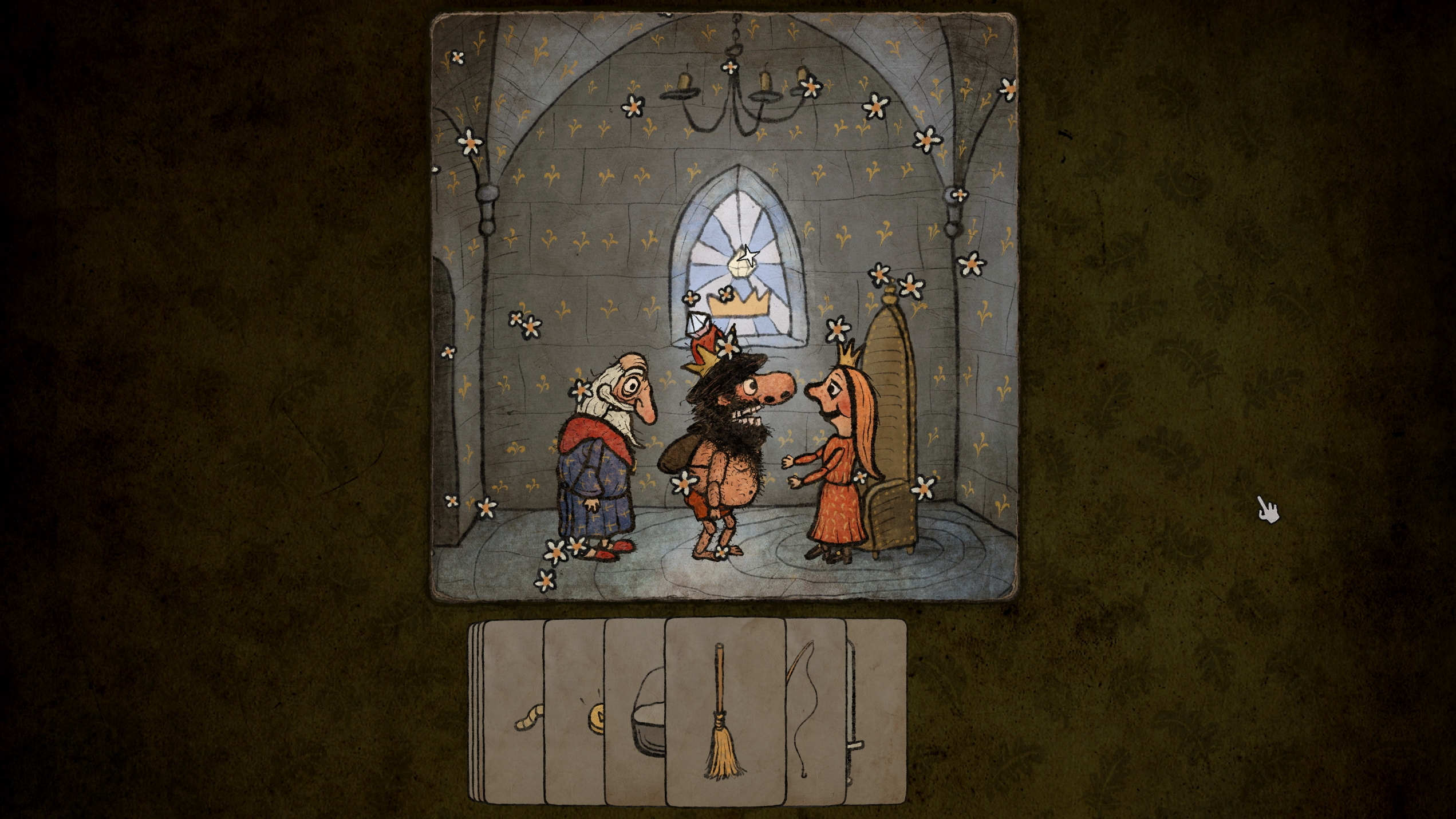 Situations are explained simply, with art-filled, wordless speech bubbles communicating what’s required through animated anecdote. It’s always clear what someone wants, even if it’s not immediately apparent how you can go about achieving it. So I knew the first hairy man I encountered wanted a bowl of something round and edible, but it was only on digging up some potatoes that I realised those would fit.

I first thought the characters in the game were jabbering away in a made up language, but that’s because I’m a massive ignoramus. On further research, I found they were sometimes speaking actual Czech, and - marvellously - my incomprehension took nothing away from the game. It is, in a sense, as non-verbal as any other Amanita game. And if you speak Czech, there’s an extra layer of laughs in there for you. Splendid. 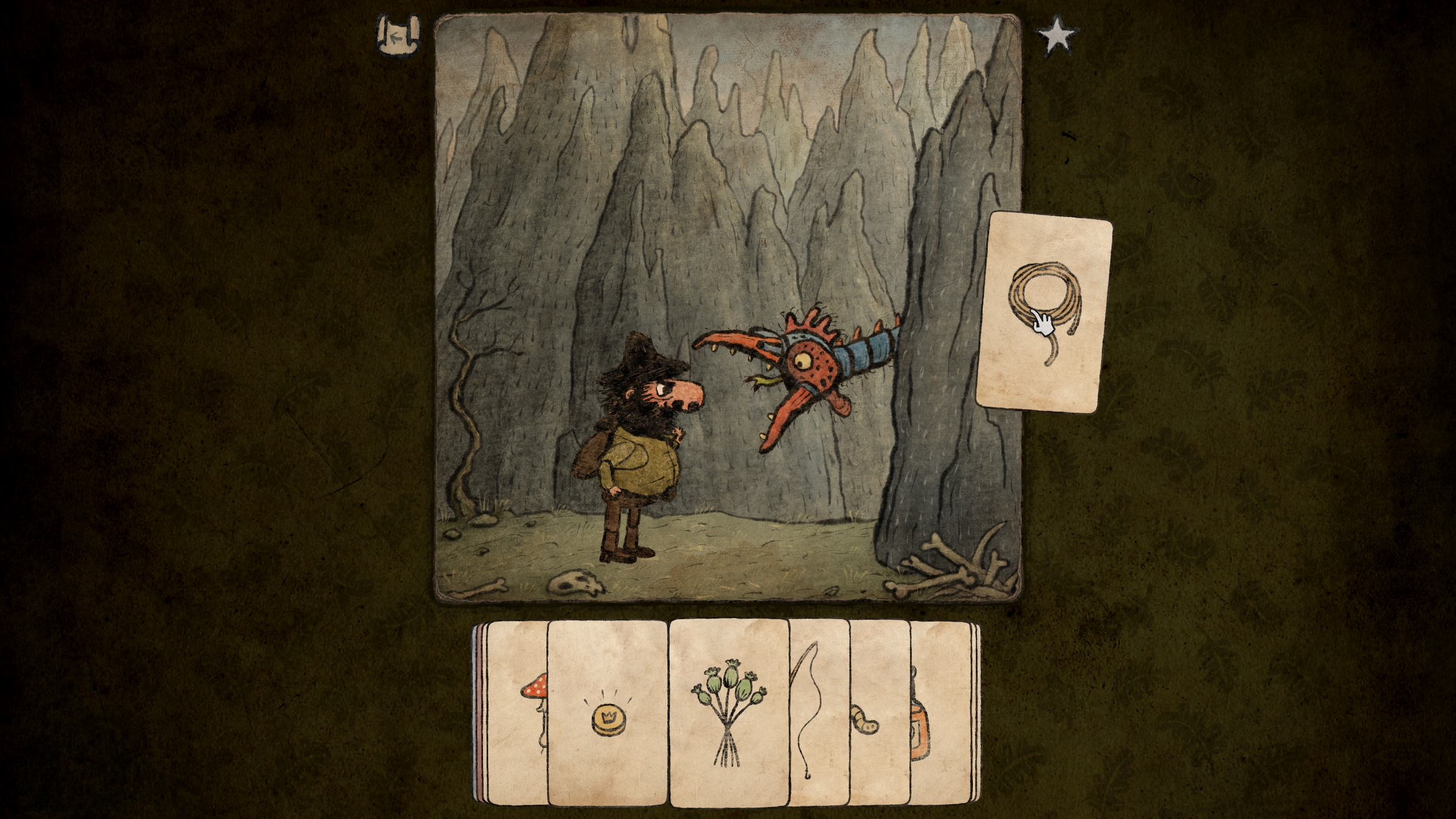 Pilgrims is, in all, a really excellent concept. But in execution, it’s over a little too soon, even for the low price of £5. The notion of playing cards to drop in characters and inventory items is lovely, and combining them in various ways to see how the results play out is rewarding when there’s a scripted result. But there just aren’t enough of them to let the idea really flourish. Too many just have the character playing out the same animation of, say, nonchalantly tossing the item about in their hands. More significantly, the game just doesn’t stick around long enough to flesh the idea out.

There’s certainly value in replaying to see other ways of solving puzzles - you collect another screen of playing cards with each solution, and flip undiscovered ones for a faded suggestion of other possibilities, so it's clear where other things are available. After a couple of plays through I’ve revealed 31 of 45. But with the option to fast-forward through those you’ve already seen, the already very short game is sped up even further, and you quickly end up just poking at it, rather than playing it. 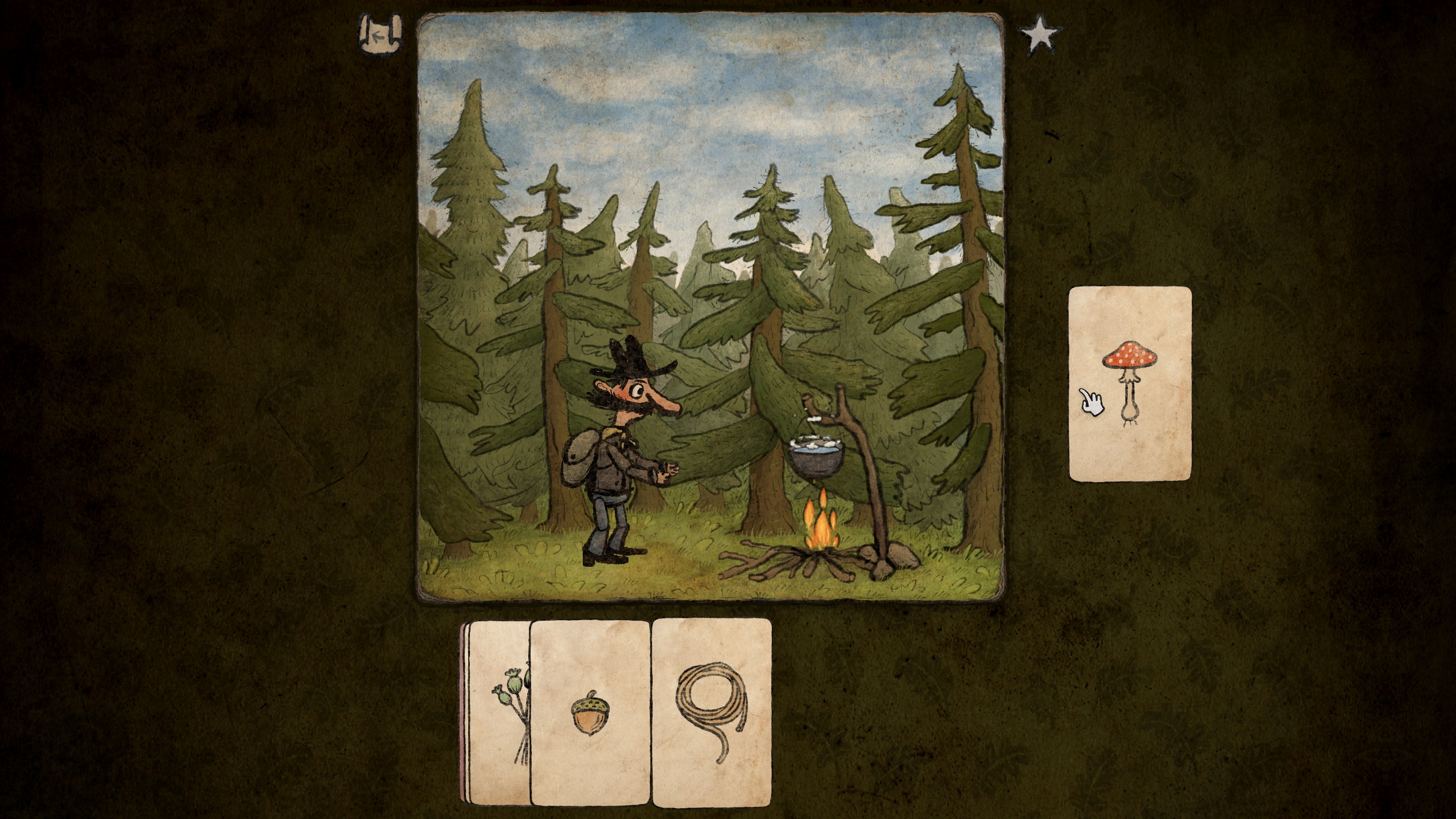 This games makes perfect sense as a bonus treat for those with an Apple Arcade subscription. For £5 a month, after all, you get this and a hundred other games. And when you probably weren’t even expecting Pilgrims, and with it covered by a fee you’ve already paid, it's hard to complain about its brevity.

On PC, however, you pay £5 and you get this alone. While that’s obviously still a very low price, it doesn’t carry quite the same value as the Apple option. And as someone who doesn’t own an evil Jobsphone, that’s not an alternative on offer. (It's also worth noting they've gone for a good compromise on presentation: the game's not quite in landscape, but neither is it left feeling like a portrait game awkwardly slicing down the middle of your screen on PC.)

Once again, this is unquestionably a grand little idea, packed with funny moments, and offering compulsion to replay at least once after completion. It has a brand new score from Tomáš Dvořák, great voice work (both in Czech, and just when the characters are gibbering), and a distinctive animation style. It’s hard, though, not to wish it were more fully realised - to see that deck of players and items built up over a larger, more complex game.

Is that just greedy? This is an Amanita vignette, after all, and a very dense one. I imagine that’ll be enough for many. For me, I saw the beginnings of a truly exceptional game, and feel a bit like I just finished its demo. But what a lovely demo!