Oh! We survived Apocalypse Day! But what worlds are here to greet us on Post-Apocalypse Day as we stagger, blinking, into the light?

I doubt it's just me who finds it incredibly hard to take in the infodump that begins most games. I try! I read, "It was the final day of the third season of the Sharmani, so Reslator gathered his bag and made his way down the Triamblate Path..." and I'm already just staring at letters, not absorbing information. It's just made up names in made up places doing made up things, and I've no chance whatsoever of retaining it, and worse, understanding it in context when the action begins.

Which makes the opening of post-apocalyptic blobber Aeon Of Sands, due out early next month, one of the most brilliant pieces of design I've seen in forever. 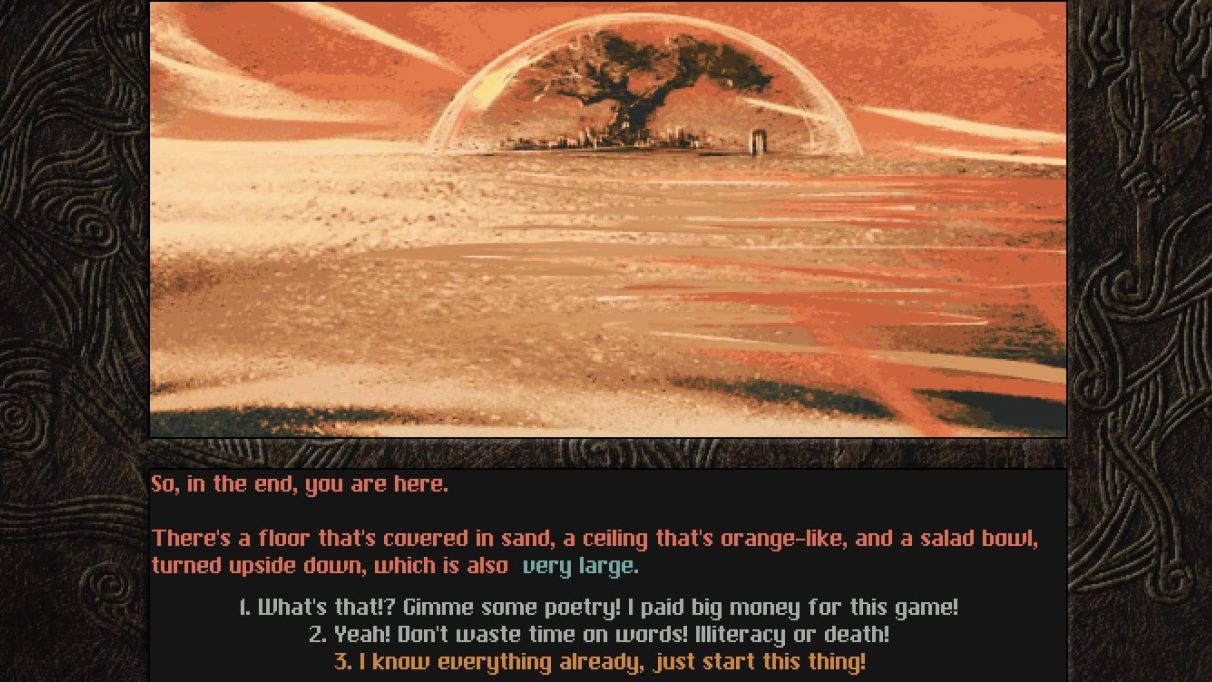 From the very beginning the game gives you choices over how you want to approach receiving information. You can be extremely mercenary at the start, responding to its extremely plain description of the opening scene by asking for a more poetic introduction, quick and dirty, or skip it altogether because you already know. Pick the first option and it dives head first into some splendidly flowery purple prose:

"As the first sun, the Giving Lord, leaves the embrace of the ever-changing hazes on the far horizon, only the gulfs of shadow cast by the sacred trees give some shelter from the heat to the people of the desert, and only the glass domes protect them from the colossal winds."

To which the only available response is,

The game carries on, saying,

"Yet, of late, on the branchways of Pantella, suspended on the tall arms of the Kinami tree and worming between its roots, a vague disquiet walks among the people, and wary eyes look suspiciously at the shadows."

To which you respond, "Sketchy enough?" And yes, indeed, I've taken not a single word of it in. Yet it continues,

"At the dawn of the Harsh Master, the second sun, a sleepy clerk named Setrani is unceremoniously brought to the house of Cosimo Smith, the pragmatist of the Brown Leaves, the ruling council of the city."

Which is why I was so bowled over with delight when it gave me these two options:

1. Second sun... Well, it's always too early to meet the council.

2. Wait! Wait! Too much information there!

TWO! Oh my goodness, yes, two! I didn't get a bit of it, forgot everyone's names already, and remember something about a tree? Click it and it says "No worries," and that it'll back up a little. And then, in the plain English I so crave when starting out in a world I've yet to experience, it says:

"You play the role of Setrani, a city clerk.

His city is Pantella, an isolated city built upon a giant tree, Kinami.

All of this is covered by a giant glass dome."

"Ok, but why?" you reply. And it continues, explaining clearly about the world, the tribes, the raiders, and how it's so hot because of two suns. "So, don't judge them if they have developed isolationism into an art."

Oh my goodness, I've taken it in. 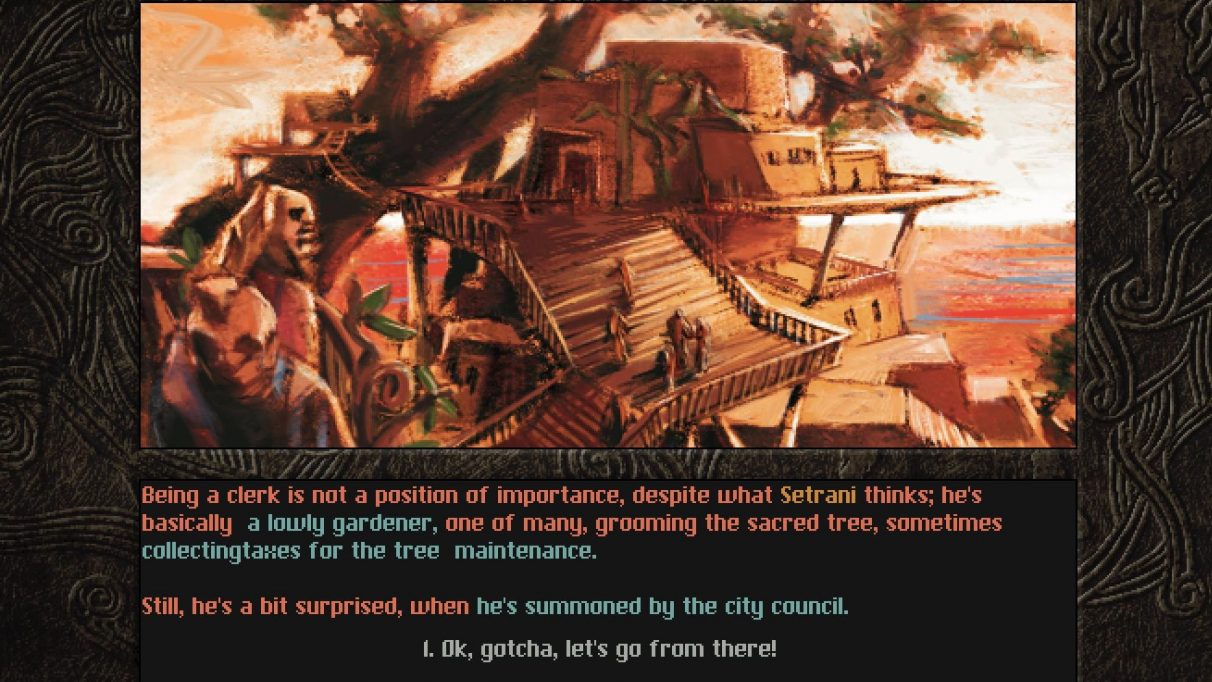 As you play the game, this superb fourth-wall-breaking can continue! There are highlighted dialogue options that will demand the omnipotent narrator step in and explain terms you're having thrown at you, or just suck them up and carry on. Right at the start there's a great moment where you can ask about a couple of city names related to a quest you're being sent on, and the game has to admit it doesn't know because it's a false errand, you're never going to get there.

"But oh, whatever kind of city they might be, and wherever fate would toss them on a map, they would have been magnificent! With lots of side quests and adventures." 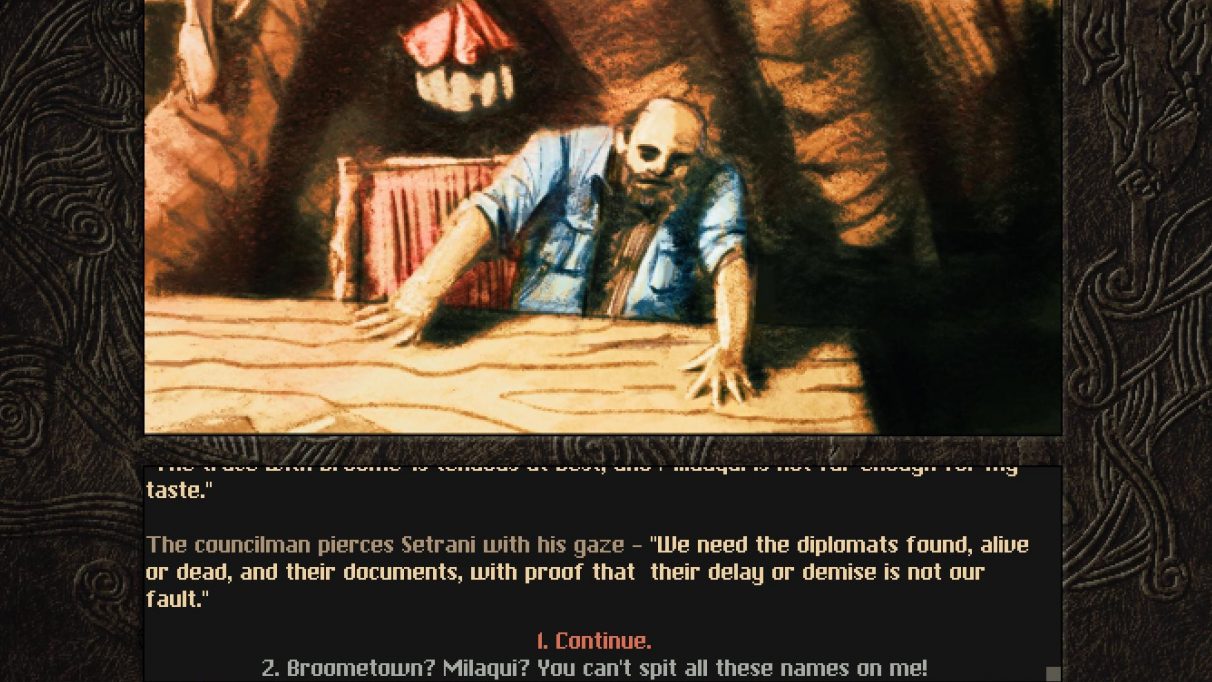 But it also, with some protest, accepts that there are people who want to play dungeon crawlers for the action, and not the story, so insist enough that you just don't want to read the text and it'll say (just before teasing you with a "game over" screen),

"Yeah, who'd want a to know about all that crap about the story anyway, with all those turns and twists that a third-rate writer pored over for the better part of a year?"

"I'll skip all the dialogues, laughin' cruelly at him!"

Choose the former and it relents!

"Just pay some attention to the inventory icon on the worldmap while traveling: when it blinks, a dialogue has awarded you some item, lucky you!

"You can still play the game without reading the dialogues, just skip them by clicking on random choices. The game will take you to some dungeon instead of other ones, but in the end it will make some sense."

And incredibly, this is just one of the many different ways it'll give you that information, depending upon if you relent at any stage to getting a bit of the story outlined in a couple of sentences, or a few more, or none whatsoever. I've never seen a game do any of this so eloquently, and so specifically, while maintaining a sense of humour about it. 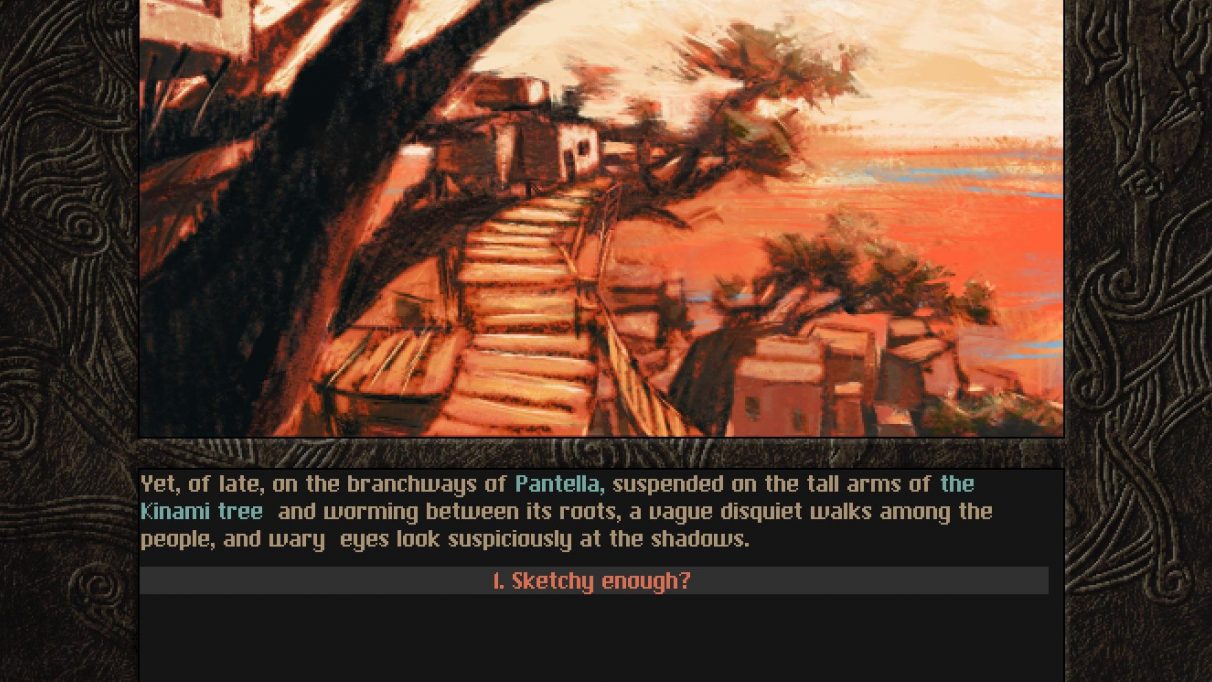 It's not often that the opening spiel of a game can inspire an entire feature, but Aeon of Sands' completely took me by surprise. Despite restarting and restarting to write this, there are still avenues I've not explored for how it can introduce itself.

And while I certainly wouldn't want every game opting for a Verfremdungseffekt approach to the matter, I'd really like to see ideas lifted from it for all sci-fi/fantasy games. Just an option to get a plain English rundown of all the flowery lore guff dump at the start would make such a difference. (Or, as I've previously argued, just reveal your story through the actual play, of course.)