Premature Evaluation is the weekly column in which we explore the wilds of early access. This week, Fraser’s been placed in charge of a tiny prehistoric tribe in deadly Stone Age survival management game, Cro Magnon.

Manhome isn’t much of a village, just a ring of knackered tents that provides shelter for a small tribe of hunter-gatherers. The latest fad is fire, and a small one burns away at the centre of the circle. That’s it. That’s Manhome. There’s not even a Morrisons. We’re probably hundreds of thousands of years from the first shop. To survive in Cro Magnon, you need to order individual prehistoric villagers to scrounge up berries, gather wood and hunt, but all of that is ultimately subservient to the imperative to make babies. The best way to stave off extinction is to out-breed it. It’s essentially the first Love Island, but with people getting clubbed to death.

Frarg Gnanko died first. Armed with only a stick, he marched into the wilderness, determined to scavenge food for his tribe and his unborn child. Instead he became dog food. He only made it a few hundred yards from the village when he was attacked by what I assume was a wolf and not the tasty deer that I originally mistook it for. Three more people quickly followed him. 11 people survived that second year. 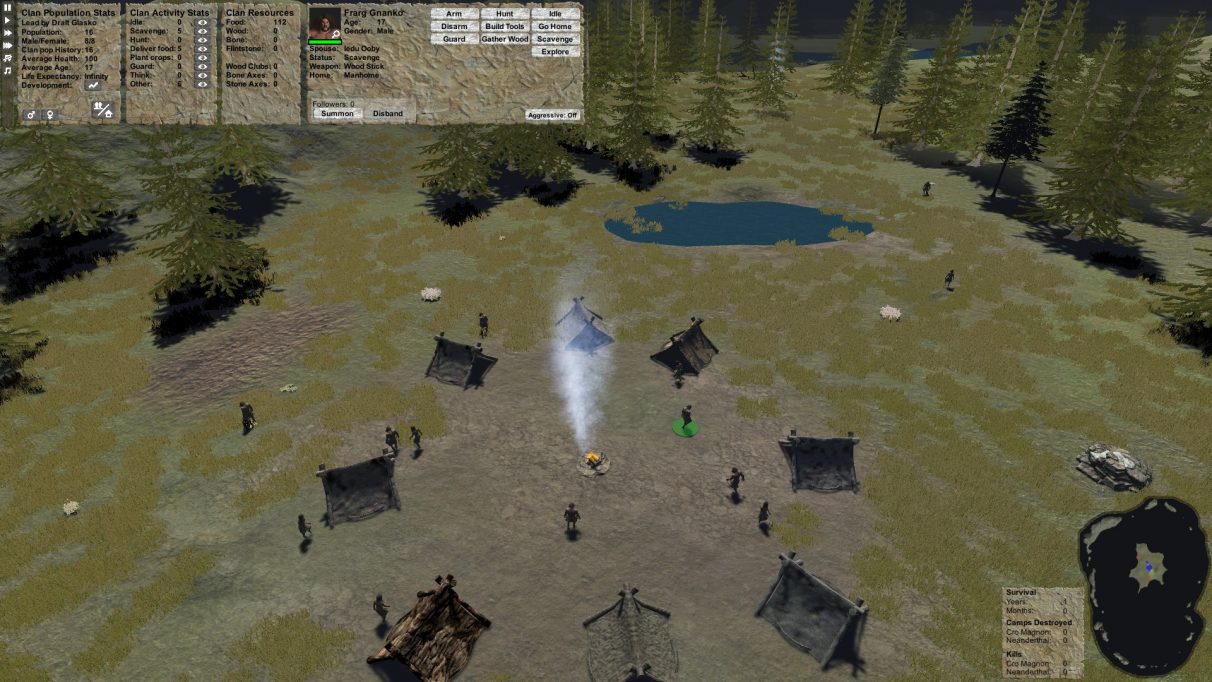 Time passes quickly. Villagers live through years in minutes, and those years are typically few. Neanderthal raids, fights with other prehistoric humans, wild animal attacks, old age and childbirth are the main causes of death, and the death toll quickly gets so high that it becomes impossible to follow. I kept track of a few villagers at first, like poor Frarg Gnanko and his buddies, Trors Knonko and Drant Prorto, who would later avenge him by killing many wolves. But they were all quickly replaced by the next generation, whose reign was similarly brief.

Villagers are recycled so quickly that they become interchangeable, though a few generations have stood out. When a series of Neanderthal raids decimated the male population, the women took charge, with the few remaining fellas kept around just to make babies. Over the next few years, almost all of the new babies were girls, and for a while Manhome had a bit of an Amazon vibe. When more boys started being born, I considered sending them to one of the outposts I’d discovered but not settled, maintaining this little matriarchy. Unfortunately, women can’t fight under any circumstances, even if they’re being attacked. I begrudgingly allowed the blokes back in. 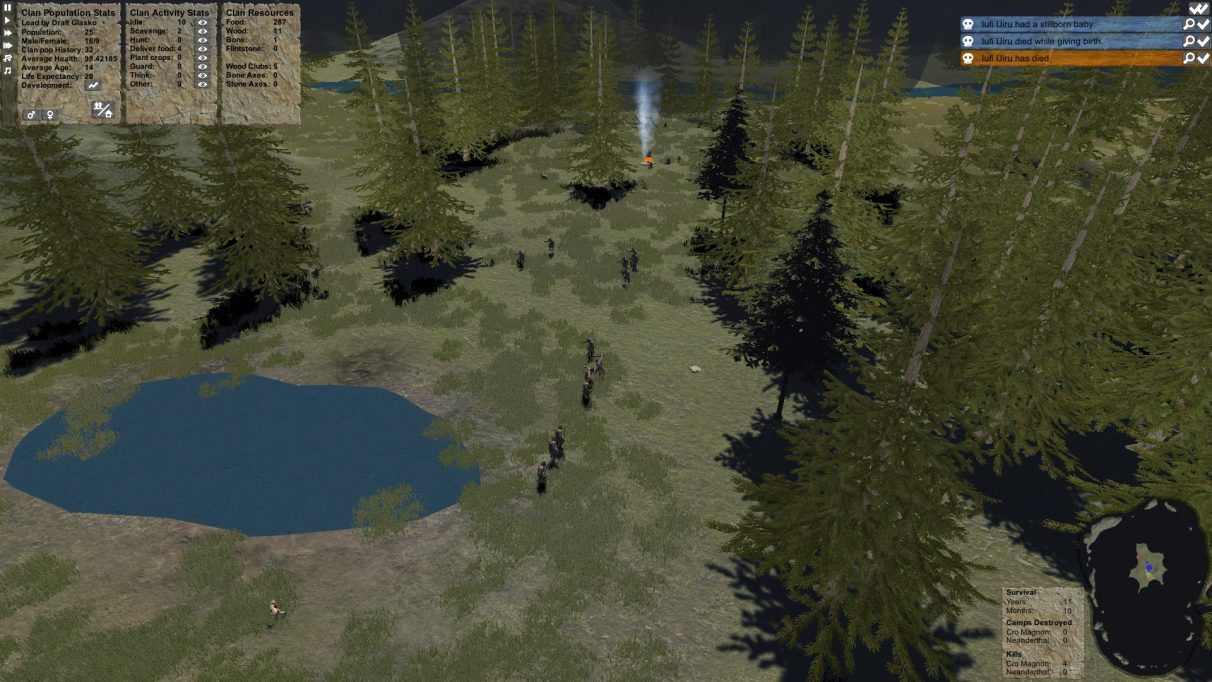 While the collective knowledge of the tribe grows as villagers repeat tasks, the only thing that really changes is the scale. One village became two, then three, growing into a tiny kingdom, but that just meant the list of villagers grew to a less manageable size. Whether its five villagers or five villages, you’re ultimately still just clicking ‘make tools’, ‘reproduce’ or my favourite, ‘think’. None of the advancements the tribe makes develop any of the systems introduced right at the the start. Whether you’re sending a villager to forage, farm or herd animals, you’re really just sending them to get exactly the same resource. Some methods of gathering resources are obviously more efficient than others, but food in particular is never something you’re going to struggle to find. Similarly, upgrading to bone and then stone clubs doesn’t change the fact that combat amounts to gathering a warband around one character and then just sending them near the enemy.

I’m not sure how much further developer Thor Gaming can take Cro Magnon in this direction. Technological advancement is a strange metric on which to judge the development of a Stone Age tribe, where farming was the nuclear fission of the era. A campaign is in the works that will increase the scale of expansion, but it’s already too big. You’ll be clearing out enemy villages long after you’ve unlocked all of the meager technological breakthroughs. 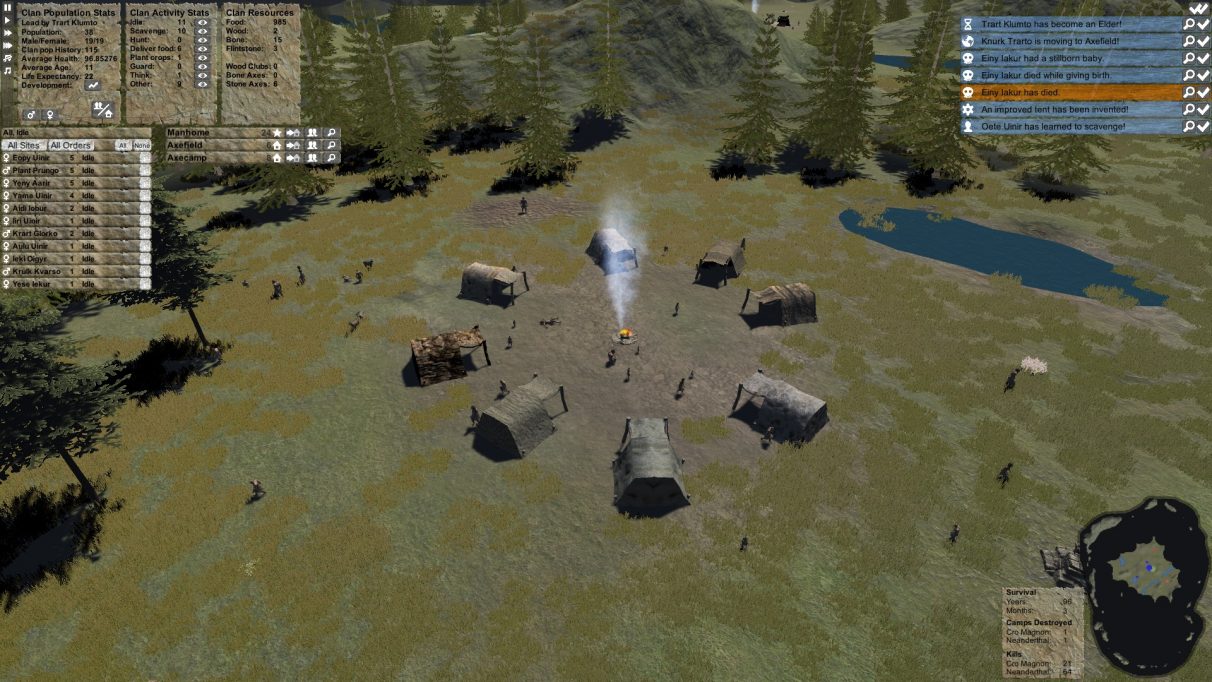 The limitations of the setting mean that development really needs to come from somewhere else. Actually, that should just be a general rule. It’s why I’m rather partial to Frostpunk. You’re developing a society, guiding its laws, morality and culture; you’re not just unlocking new technology and buildings.

Cro Magnon’s villagers are empty-headed workers who get sent out on tasks and generally just get on with it. There’s the hint of something more, however. There are family units, and spouses will follow their partner if they are moved to a new village. There’s a hierarchy, too, with a chief who only seems to get mentioned when he dies. It’s the faintest suggestion of actual relationships and structure. What happens to someone who loses their spouse? How does the tribe pick a new chief? Exploring these things would surely be more compelling than waiting for the tribe to figure out how to plant crops.

As the tribe spread out all over the forest, the micromanagement threatened to sink the game. Over 100 villagers lived in five settlements, and every single one of them needed to be told what to do. Individually. The whole roster can be viewed from a single list, at least, which can also be broken down into activities, but keeping on top of them is a full-time job. You can’t rely on the UI, either. If a group of villagers drop what they’re doing to engage an enemy, they often won’t go back to work, but they won’t show up as idle. It’s also impossible to tell if your villagers are actually pulling their weight. There’s nothing that indicates how long they take to perform tasks, or how much food or wood they’ve gathered. The only thing you know is what’s in your stores, and that really isn’t enough even for a very simple management game. 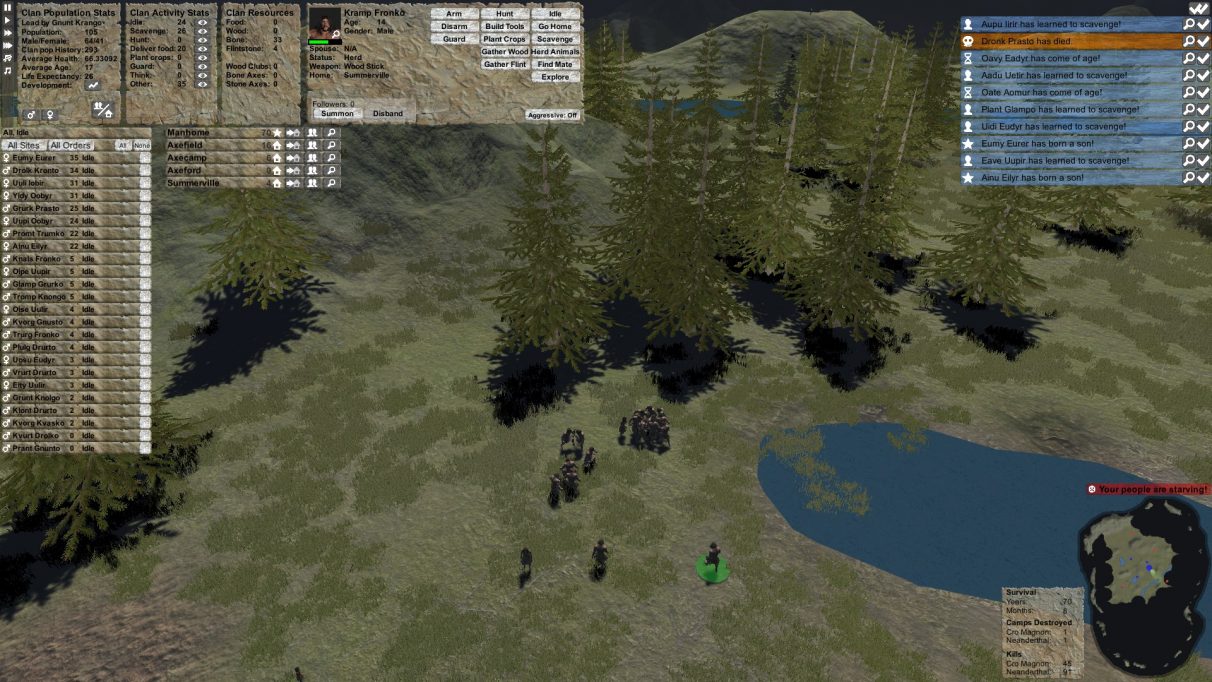 In the capital of Manhome (still just some tents and a single campfire), the population surge had made things untenable. Though there was apparently room for more people, overcrowding had created so much congestion that everyone was stuck. The list told me they were busy working away, but instead they were just vibrating on the spot, in a big huddle. It became an epidemic and soon all the villages were afflicted. Whole years went by where I did nothing but untangled people.

Cro Magnon says you have to destroy the Neanderthals and dominate the other Cro-Magnon tribes, but I grew determined to co-exist with them. I had more food than I needed and plenty of room for expansion, so there was no reason for me to continue swinging my dick around and scaring the neighbours; no scarcity driving me to raid and pillage. The only reason to keep attacking them was because they kept attacking us, and that was a cycle that I wanted to break. 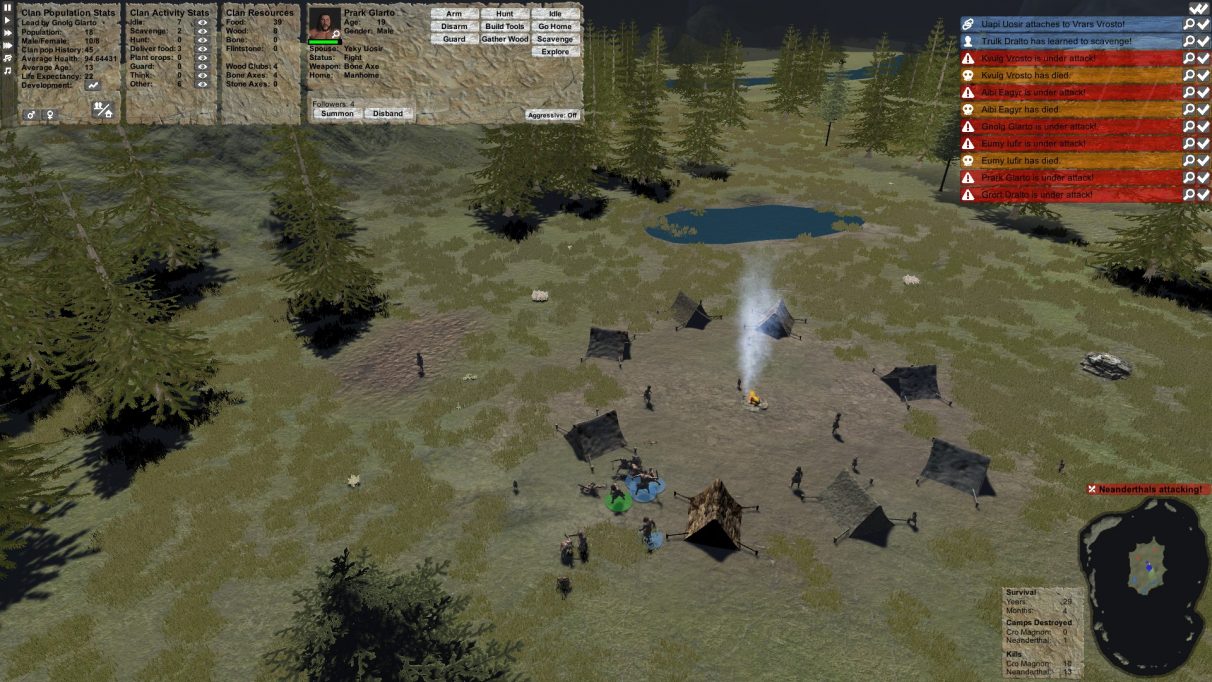 It didn’t work, obviously. The other tribes kept sending their rowdy warriors into my territory, and while my tribe was too big to fell in one go, the attacks took their toll. It was actually starvation that finally ended things. Everyone who was farming and herding just stopped, and fair play, they deserved a break. It proved to be fatal for the rest of the tribe, however, who all keeled over.

Cro Magnon barely gets started. It’s the very beginning of a survival game, gathering basic resources and building simple tools, stretched out for hours. Despite the narrow focus, it’s largely abstract. You never get into the nitty gritty of running a tribe. You’ve essentially just got a clipboard full of chores to dole out. “Gnolg Glarto, you’re making babies today.” And once the baby factory has churned out enough new villagers, it becomes an RTS with a single, terrible unit. It’s like trying to fight with Age of Empires’ villagers for an entire game.