This week’s Premature Evaluation gives Fraser the highly coveted job of mucking around in the dirt while managing an ant colony in creepy crawly RTS Empires of the Undergrowth. It gets really dark down there.

“The ants were weak and confused. We should start again with another colony.”

Like so many nature documentaries before it, Empires of the Undergrowth looks like it’s going to be an informative delve into the animal kingdom -- specifically the tiny world of our pals, the ants -- but instead unfurls into a cruel reminder that nature is terrifying and spiders are dicks. And even here, in this RTS set in a formicarium, the real villains are humans. Awful, awful humans. 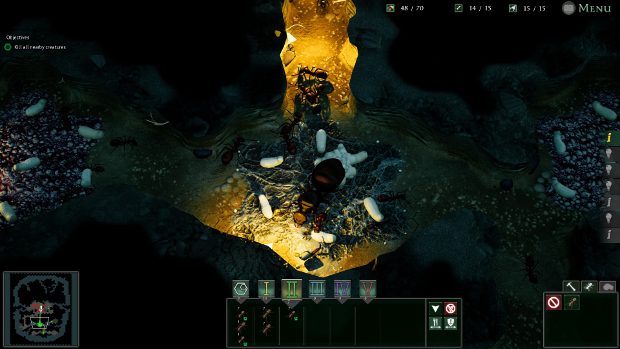 Empires of the Undergrowth is a lot like SimAnt, with both following the progress of an ant colony as it spreads and fights other colonies, along with spiders and other bugs. But where SimAnt tasked players with conquering a garden and then driving humans and other ants out of a house, Empires is split between a formicarium in a laboratory, which serves as a sandbox and a hub, and a series of missions that pit different colonies against a variety of obstacles, including a pretty nasty invasion of slave-making ants.

The formicarium is watched over by a pair of nameless scientists whom I will refer to as Bastard 1 and Bastard 2. At first it looks like they want the colony to thrive, with Bastard 1 even whispering encouragement under his breath, but their true purpose is revealed in the special formicarium challenges that have to be tackled before progressing to the next set of missions. 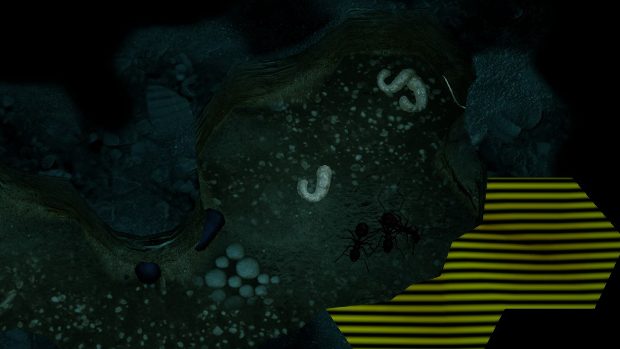 Bastard 2 -- she sounds like she’s in charge -- becomes a Roman Emperor, demanding that the ants perform for her amusement. Bastard 1 sets up the formicarium like an arena, unleashing enemies upon the unsuspecting bugs. These ants are just chilling, minding their own business, and suddenly an army is poured into their home from above, quickly homing in on their vulnerable queen. And if she dies, the scientists just shrug.

They purge the corpses, and then they start the experiment again.

It’s all rather grim! An unexpectedly gloomy tone permeates throughout the game’s missions, too. Empires of the Undergrowth is all about struggle and adversity -- drama. But, you know, it’s also about ants. The narrator is the source of most of this drama outside of the lab, adding colour to the battles and invasions with brief snippets of nature doc narration. They have a slightly detached, ominous quality and tend to end on a pessimistic or threatening note. 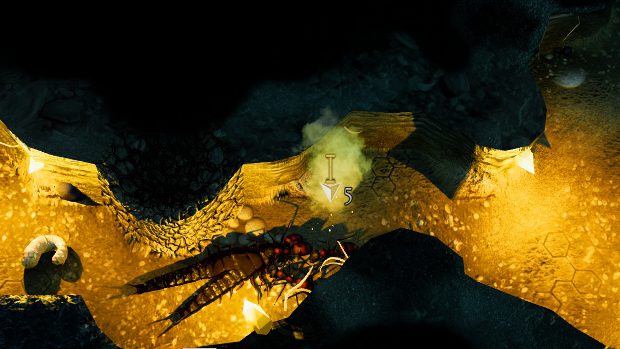 Take his comment on the very first fight, for instance. The objective in first mission is to kill everything, and to do that, an army must be born. Armies need food. Raising an army, then, means sending worker ants out to dig their way to food, usually other bugs, and build nests so more ants can be born. Black ants serve as the warriors of the colony, and cost a little bit more food to spawn. After a few minutes, I had a trio of black ants, and I headed to meet my first enemies, some gross Devil’s coach horse beetle larvae. Three times the size of my wee warriors, they were intimidating beasties, but my brave troops managed to lay down some hurt. It was cause for celebration.

“If the ants had stumbled on the adult version of this larvae,” the narrator interrupts, “they would not have been so fortunate.”

He’s just not an upbeat guy. Ever. When my hungry ants found some defenseless grubs, here’s what he had to say: “They will be butchered and carried off for processing.” It’s almost as bad as the time David Attenborough narrated the miserable journey of that starving polar bear. The audio follows suit, with a score that constantly sounds like the threat of a storm. 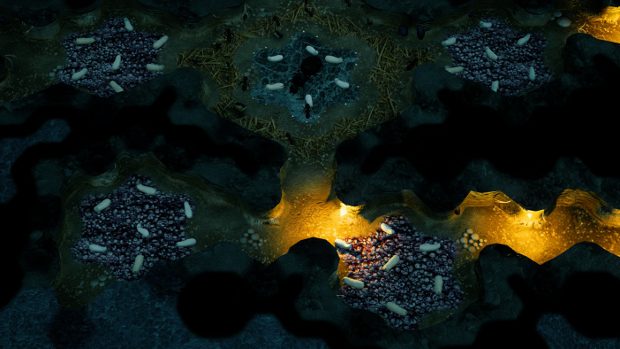 It’s got the hint of a survival game, even though it’s largely a traditional management RTS. Each mission has a limited amount of food that can be harvested and hunted, and thus an invisible cap on colony sizes and recruitment capacity. When an ant is killed in combat, a new ant is born in the nest, and if you’ve got a lot of food, then that means you’ve got a steady supply of reinforcements, but when that dries up, the queen becomes vulnerable.

Food’s required for building nests and upgrades, too. The underground maps are made up of hexes -- hooray! -- and generally you’re going to want to build nests in hex shapes, as well. When you’ve laid down six nest tiles together, you can start upgrading them, netting yourself beefier ants. And any tile surrounded by either a wall or other tiles can then be upgraded one step further, making a hex the most efficient shape. It’s a bit more involved than just plonking down a tile wherever you want, then. The layout of the colony is something that needs to be planned, and nests bring with them another wrinkle -- they make ants travelling through them move slower. When an invasion is coming or there’s a huge amount of food needing to be transported, those lost seconds can be a wrench in the works. 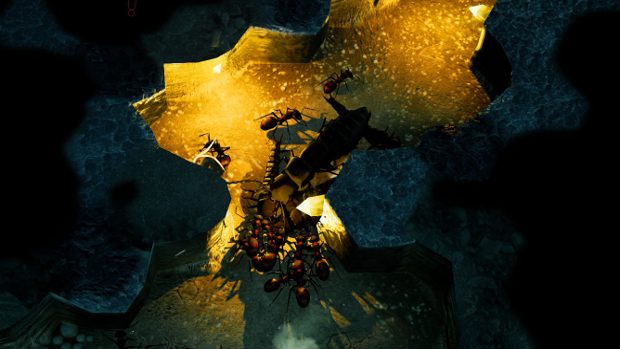 Commanding armies of ants is done neatly through pheromone marker groups. Every ant that’s born in the same nest is automatically put in the same squad, which it’s permanently attached to, and then it’s initially assigned to the nest pheromone group. That means it will automatically go about its business, tending to the nest by collecting food and caring for eggs. Dragging these squads to a new group, however, gives you more control over them, letting you place markers that draw them towards a specific location.

That means you can prioritise enemies, prepare armies for an attack or just make sure that someone picks up that bug you just murderered to satiate the hunger of your ravenous colony. Once the colony starts to get a bit large and unwieldy, it’s just the right level of micromanagement. You can make lots of tidy groups and let them get on with your orders, or you can take control of a couple of groups to catch some enemies in a pincer movement. 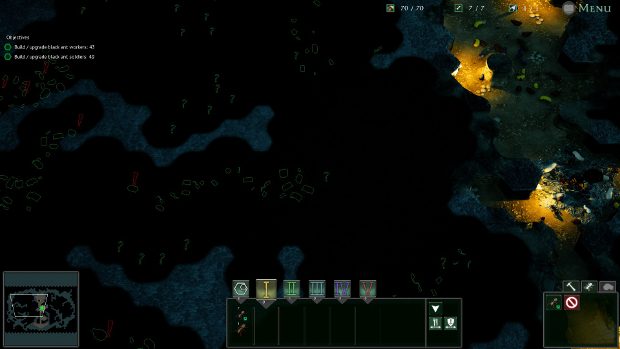 While these missions aren’t directly related to the lab formicarium, the rewards for completing them are. Territory and food aid in the expansion of the colony, while royal jelly can be spent on fancy DNA upgrades that run gamut from giving the queen the ability to confuse nearby enemies to unlocking entirely new ants. The challenges that split up the four missions can only be tackled once you start unlocking more ants and building nests with the food rewards.

The interplay between missions and the sandbox makes both of them better. There are tangible rewards for completing missions that go beyond simply unlocking the next one, and the sandbox becomes a test bed for experimentation, using lessons learned from the missions to improve the colony and royal jelly to mess around with DNA. But it also introduces some grind.

It’s possible -- easy, even -- to finish the first two missions and not be ready for the game’s first challenge. And there’s no way to know until your queen is dead. It’s not that the challenge is especially hard, but it definitely is if you’ve not entirely focused on unlocking and then spawning plenty of black ants. If you unlocked some worker and queen upgrades instead, or built a few worker nests, then you’re probably going to need to replay at least one mission. 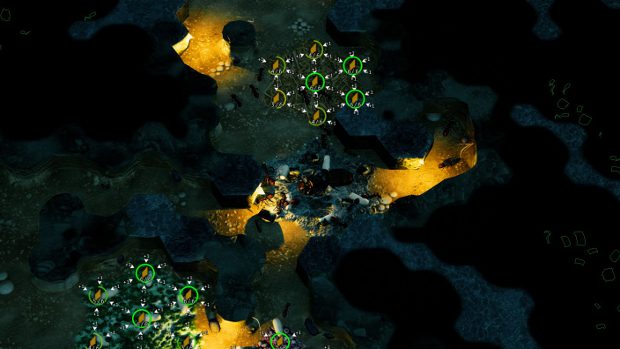 Since there are only four missions, you might want to replay them anyway, but it also suggests that there’s only one right way to do things, defeating the purpose of the sandbox. It also makes it harder to progress at lower difficulties. End of the mission rewards are based on the difficulty level, so you’ll be more likely to need to repeat missions if you’ve been playing on the easy or medium levels. When the game triples in size, that grind is going to start to become a pain.

Life in an ant colony isn’t fair, of course. It’s harsh, and it’s full of arseholes. If your main issue with SimAnt was that it wasn’t nihilistic enough, then you’re in luck. If your tastes are less unusual, Empires of the Undergrowth is still worth aiming your microscope at. My mention of spiders has undoubtedly scared some of you off, which is entirely reasonable. I mean… it’s got funnel web spiders. They leap out of the darkness and kidnap ants to eat later. Anyway! There’s an arachnophobia mode, which should lessen the impact of these eight-legged monstrosities by… putting funny hats on them. 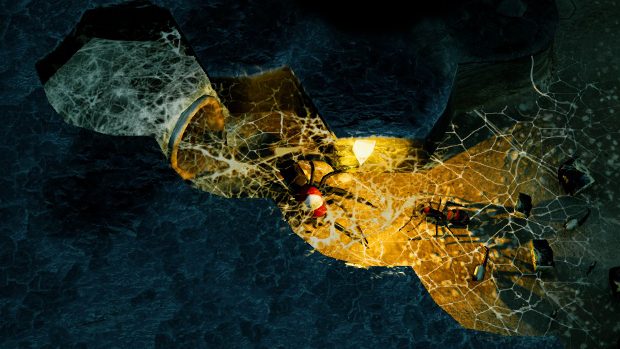