We have entered 2020. We survived that entire monolith of a decade. I don't know what 2019 was like for you, but I think I can say with a degree of certitude that I have had better years. Despite the apocalyptic politics, the extreme weather (incl. fires, floods, and earthquakes oh my), and the continued existence of Twitter.com, time is still marching defiantly onward. Admirable, that. Would that I had the confidence of time's endless processional to carry me into the 2020s.

Here are some free games to play in the early moments of this new decade about endurance.

To Kindle Color from Dana Holdampf 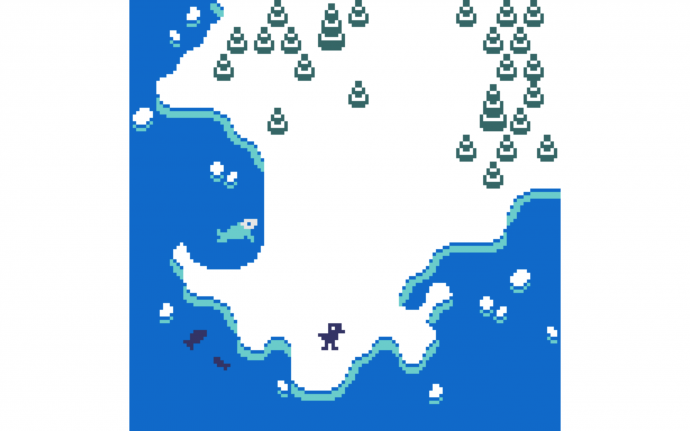 I spent some time in Iceland during the summer of 2018. The country is right smack dab in between North America and Europe, and so the Icelandic tourism board capitalised on this geographic advantage in their "free layover" scheme starting around 2010. Suffice to say, I know a lot of folks who have been to Iceland in the past decade. So I went, too. Iceland gets a lot of draw in the winter for their proximity to the Northern Lights, but I passed on the Aurora Borealis in favour of the midnight sun. It is strange to have an anchoring weather-based phenomenon, like the sun setting and rising, so radically altered. I ate smoked fish at 2:00 in the morning, thinking it was 5pm. I last did that during a period of significant depression. Light is weird.

In To Kindle Color, you are a Cormorant living in a colony offshore of some icy, craggy land. The trees are thick and snowy, and the Auroras in the sky have grown tired. After a long year, they have lost their colours and don't know when they will return -- like wisps of smoke, the Auroras descended to rest their weary bodies within the woods. Fortunately for the Auroras, you know just what the doctor ordered: rest and relaxation. It is up to you to venture through the woods and snow to find the most restorative locations and company for the Auroras' rehabilitation. It is a sweet, short fable -- perfect for reminding yourself on winter nights that even the Norther Lights need a break sometimes. 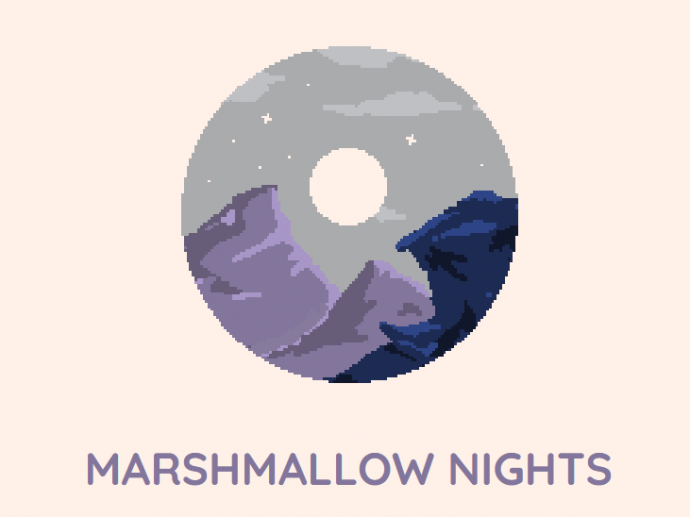 Marshmallow Nights is a quick little vignette narrative game about goofing off and eating marshamllows with your friend. You can choose whether or not to eat the marshmallows, and you can choose whether or not you want to stargaze, but you've always got the company of your friends. I spent a lot of time in the woods with my friends growing up, and Cornish's depictions of the same manage to be fairly cosy. In my own choices through the game, I am more reminded of the McDonalds Alignment Chart: a triangle of three choices, one of which most closely syncs up with your personality. I am firmly a "We have food at home," whilst my partner screams "McDonalds!" in the passanger side. As I make choices in games, I similarly find myself making decisions which are more on the "practical" bend of things. Why should I shove my mouth full of marshmallows? Surely that's a choking hazard. Marshmallow Nights helped me recognise that I can be a bit of a buzzkill. Oops.

I hope I have a bit more reckless fun left in me yet -- at least enough to order a single black coffee and leave. 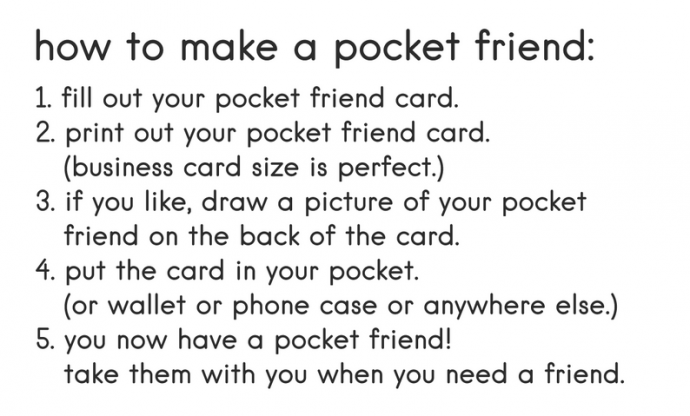 Made for the Not A Game Jam, Pocket Friend is less of a game and more of a spell. In some cases, spells are games. Sometimes, it works the other way around (the spell is the game). Magic is fake, but brains are powerful dumb. Pocket Friend is a printable card, upon which you can write the name and information of your new (imaginary?) friend. And then, like magic, you have a portable friend. npckc writes that the (not) game was designed to help folks who might be anxious doing things alone.

Perhaps you want to go to the cinema, but you're afraid of going by yourself? Bam: meet Jensen Jones, my film aficionado pocket friend. They love films but they hate Quentin Tarantino! The perfect companion! Looking to head to the Farmers' Market, but you don't want to look like a loner? Take Peggy with you! She's a sentient ear of corn, and a great listener. Anyway, what I'm saying here is this: you're in charge of your brain, and even if you feel like anxiety is getting the better of you, there is always a way to trick your brain. 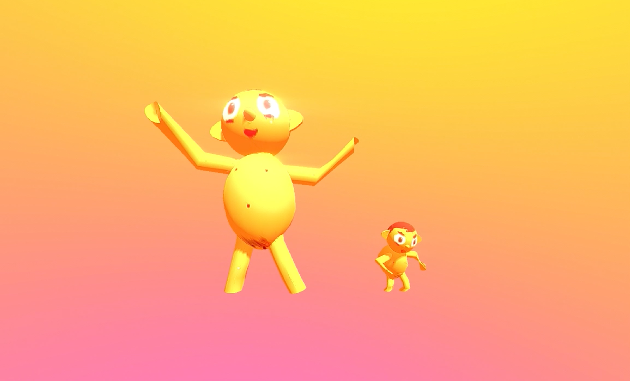 Sometimes you gotta ring in the new year with a wet and wild dance party. No phones in sight. Just vibing.