Whenever I go a week without writing a Priceless Play, my head goes a little fuzzy. It has become a part of my weekly routine and when I take a week off here and there to tend to other writing commitments, I feel a little lost. When I load itch.io back up again, my fingers feel a little clumsy, as if I have lost the rhythm of things.

I have been reading and writing a lot about grief, loss, and mourning lately. Not necessarily the profound sense of grief following the death of a loved one, but instead a profound and ongoing melancholy which can pervade a community, or colour a prolonged period of time. It isn't the most cheerful corner of my research, but it is generative.

Here are some games which remind me of that sort of unknowable melancholy.

Neo-Brutalism of Tomorrow from Moshe Linke

Moshe Linke's Neo-Brutalism of Tomorrow is a "virtual art gallery." It is a brief experience -- ten or so minutes -- of walking around a (neo)brutalist gallery space. The architecture rendered here is so evocative of The East Building of the National Gallery that I was taken aback. Do all art museums' entries feel like this? The high ceilings, the low benches, the tall windows? As the light shifted and I turned the first corner, I half-expected to see a Calder mobile hanging from the ceiling.

Linke's game is a series of "contemporary works inside a neo brutalist structure." Each room offers a change of light, sound, or space to transform its overall experience. A piece of fabric dances from one corner of the space to another, leaving a curious stillness in its wake. Soft white light slowly shifts to a deep red, accompanied by a low and guttural sound and my stomach drops just a little. No one else is in the gallery. It is just you, the changing light, and the mountains in the distance.

Moss as texture as space folding onto itself from Pol Clarissou

Pol Clarissou's Moss as texture as space folding onto itself is a small Bitsy tour through the tight clusters and branches of sphaghnum moss. Spaghnum moss, also called peat moss, is known for its slow rate of decay and high water retention. Its particular composition makes it perfect for environments like bogs and for the preservation of organic materials like dead bodies. In this game, Clarissou walks through many different characteristics of peat moss in a poetic haze, descending down into the wet earth below. It is a beautiful, dreamy, aching sort of game. I loved it.

A little over a month ago, I had to re-pot an orchid I was sure had died. I hadn't watered it for months and was waiting for it to finally give up and whither away, but its leaves remained stubbornly thick and green. I pulled it out from its pot, separated the rotting roots from the living, stripped their papery sheaths, and carefully returned the plant's mess of roots back into a cosy cluster of fresh sphaghnum moss. It has since started sprouting again. I don't quite know what to make of that.

Birthplace of Ossian from Connor Sherlock

Connor Sherlock's Birthplace of Ossian is a walking simulator of an extremely large and extremely empty space. The itch page for the game touts its one-hundred square kilometers, its lack of invisible walls, and its landscape with a quote from the writer Henry Okun: "[The landscape] is more real than the people who inhabit it. Drowned in eternal mist, illuminated by a decrepit sun or by ephemeral meteors, it is a world of greyness."

Okun is writing about the depiction of Scottish-Gaelic Ossian poems in landscape paintings. Presumably, this is where Sherlock takes his inspiration for the game -- the melancholic Ossian landscape. The landscape here is empty; devoid of life except for yellowing grass and a persistent soundtrack which borders on oppressive. I do not recall ever having read any Ossian poetry, but if it is anything like this game of its "birthplace," endless and empty, I don't know that I need to. 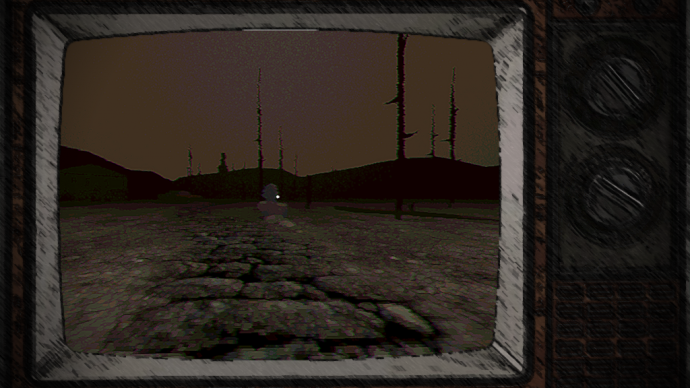 The itch page for PAGAN: Emporium is confusing and aggressive, which is frankly an energy I aspire to achieve. Here, however, I am left a bit... lost. It opens with the definition of "sakawa," potentially (?) a term for Ghanian internet fraud "with fetish rituals" and "sacrifices". These fetish rituals and sacrifices purportedly promote the fraud's success. Okay. So, there's that. The text then shifts, asking if "you ever wanted to TRAVEL ABROAD," before declaring: "Too bad, because you're going to fucking die here. We all are going to fucking die here." Great. Off to a great start.

The game itself loads like a VHS tape -- with a whir and screen tears. The sounds are abrasive, the scenes are dark, and the landscape empty (save for five incomprehensible knights). I don't know where I am going, but I try to follow the stone paths from ramshackle house to ritual fire pits and back again. I get occasionally lost, and when I make it to the (blessed) ending I am greeted with a paragraph from Deleuze and Guattari's A Thousand Plateaus. Why? I'm not sure. But I'll be thinking about it for days to come.

Maybe I wasn't supposed to know in the first place.