Hola, jugadores. I rarely see videogames in Spanish. It's understandable: English-speaking countries make up a significant portion of marketing demographics and sales for big-budget games. But even in the indie-sphere, where I do most of my trawling, I wasn't finding much. I knew that this was an oversight on my part -- I live in a majority English-speaking country and the development circles I operate in are majority English-speaking, too. If I wasn't finding Spanish language games, it's because I wasn't looking hard enough. So I set off on a week-long journey to find some stellar, free, Spanish indie games. They're from several different countries, continents, and backgrounds. I hope you enjoy what I found.

Among a variety of other places, my mother grew up in Guanjuato, Mexico (Guanajuato City and San Miguel de Allende). I've never been able to go, but I've wanted to get a chance to visit and see the place that my mom called "home" for most of the 1960s and 70s. She certainly managed to bring quite a bit of it into my childhood home, from the decor to the food and the huge ceramic plate of La Catrina she hung in my bedroom ("You share a name!"). I'm not Mexican, but my upbringing instilled in me a deep love and affection for the place and the Spanish language. So, I stumbled around a bit in the Spanish that I know to play these games. If you've got a rudimentary knowledge of Spanish, a dictionary, Google Translate, or just your own Spanish-speaking brain, give them a play. Enjoy!

Marchand made Onda Verde to support an Argentinian march for free, legal, and safe abortions in August of 2018. It's a fairly simple game -- try and help the protestors reach Congress without any interruptions from the opposition, and get enough points before the song ends. The game has a really wonderful breakdown on the Argentinian games blog, Matajuegos. Here, Marchand explains that he made Onda Verde as a way for people to virtually participate in the march even if the couldn't be there in person. People would submit their avatars, and Marchand would put them into the game's march. Pretty clever.

The game is worth playing if only for the song playing in the background, and helpfully subtitled. Mi gata quiere abortar, (or, My cat wants an abortion) is a jam. You can find the song, by Dúo Microcentro, here. Marchand notes that one of his inspirations was Doom Feitito a Doom mod by fellow Argentinian gamedev Rumpel -- featured below. 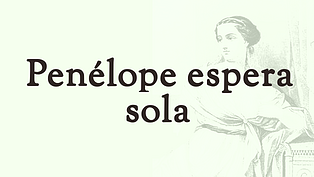 Rumpel is a prolific designer, active in the Bitsy and narrative scenes, among others. Penélope espera sola is a game developed for the 2018 game jam Rayuela de Arena, a game jam for narrative games in Spanish. This jam's theme was specifically around themes of Castilian myths and religion, and the works of Jorge Luis Borges and Cortázar. So many of the games are worth playing, but I'm a sucker for Penelope, the long-suffering wife of Odysseus.

Penélope Espera Sola follows the store of Odysseus' wife, Penelope, as she waits for him to return from the Trojan War. As she waits, suitors "pile up in the banquet room and devour everything: Food. Patience. Pride." It is a clever reimagining of Penelope's wait, and her sense of self as she weaves and unweaves at her loom. The game demonstrates a mastery of the inner workings of Twine, and deft use of language. 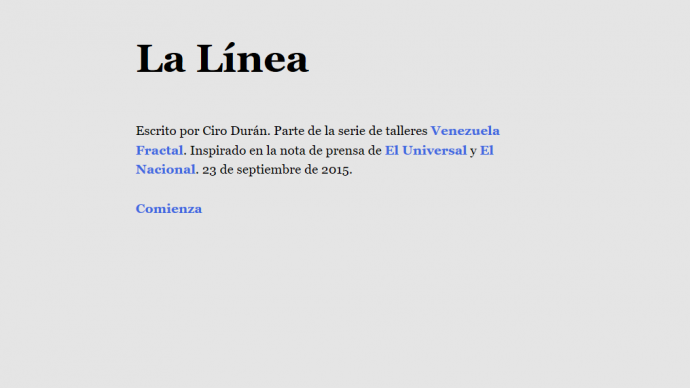 Silvi is a young man, living in Santa Teresa del Tuy, Venezuela. He goes to school because he's told it's important. After school, he fixes air conditioners with his godfather. The air is hot, and his future (for what it is) is certain. After all, everyone is going to need an air conditioner when it's regularly above 28°. And eventually, everyone will need an air conditioner repaired. After work one day, Silvi goes to buy a soda. He thinks about the current climate in Venezuela, and what his future holds.

Ciro Durán wrote La Línea for an online workshop, Venezuela Fractal. The piece was inspired by a newspaper clipping which reported the death of a young man, Silvi, to a stray bullet. The newspaper reported his death in a single line -- "a dry newspaper note," said Durán. And so, Durán wanted to reimagine the story, to say goodbye. Durán's retelling is beautifully written and deeply personal, despite the fact that he never knew the young man featured in the game. Durán told me that he chose this recreate the story in Twine as a more "dignified" way of dealing with the death of a young man to violence. "I never knew Silvi, but either I know people who have lost a dear one by this, or they know someone who does, it touches almost every Venezuelan you'll meet."

And... if you always want to win... Dinopianito! By Juan Vegetal and Guido La Rosa

In Dinopianito, you are a dinosaur musician with extreme skills. Eat the fruit (or don't) touch all the piano keys (or don't) and win (always)! I've had the song from Dinopianito stuck in my head all day. It's fun and uplifting, and you win no matter what. Could anything be better?