#LoveIndies is an annual community-driven effort to celebrate indie developers, the games they make, and the communities who love them. I've been at the helm of this little corner of RPS for ten months now, which has given me the opportunity to cover over 150 indie games. Each one of those games is an inspiration, tbh. I think it's a miracle that any game gets made, and games made with little-to-no external funding are some serious MVPs. So, in the spirit of this week (okay, ten days) of indie love, I took a deep dive into the #LoveIndies hashtag on Twitter and itch.io to see what games were lurking.

Oh, and a little nudge: one of the focuses of #LoveIndies is to rate and review indie games. It does wonders for devs in this algorithm-driven internet landscape, and it's just darn nice to leave feedback for creators to get all warm and fuzzy. Don't forget to click that like button!!

Limbocore is a strange, vaguely cursed, faux-retro exploration game in limbo. You are Bug, and you must discover why it is that you are in limbo by interacting with your environment, exploring various corridors to different nowheres, talking to limbo's many inhabitants, and battling angels with cards. I love its design -- the fish-eye flare out on the sides of the game window, the text effects, the divination cards, and the general spooky vibe. It is so refreshing to see a game with a clear sense of style like this one.

Is there much to do in Limbocore? Arguably, about as much as there is to do in limbo itself: read the gravestones, take a dive off the edge of the universe. Gameplay takes around fifteen minutes or so, at which point you are likely free to go. I vote that there be a new installment of microgenre for limbocore. Vaporwave and et cetera aesthetics: eat your heart out. 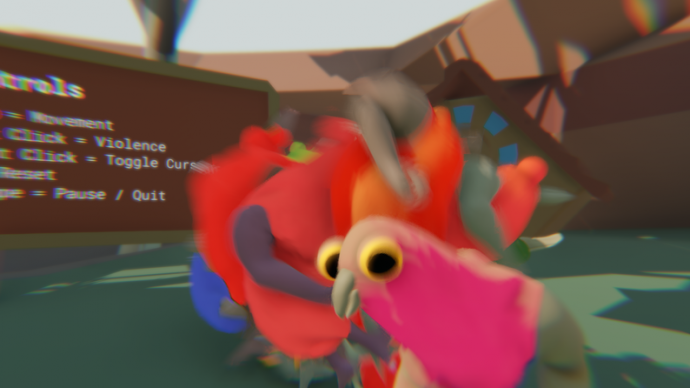 Well! This one's pretty wild! First: Birds with arms. Second: They all learn from you. And then? They'll learn from each other. Bird By Example is a Unity machine learning prototype which was mapped onto some beefy birds, and then it promptly spiraled out of control. I often find that my favourite sorts of games in the indie sphere are games which were initially little experiments, and then things got a bit out of hand. Bird By Example is no exception.

There's very little I can say about it which accurately captures the game's absurdity. The game's dev, Noah, has an absolute corker of an itch page, however, which does a bang-up job of letting you know just what's in store: "Bird by Example is -- and I say this with great passion: 'A mock RPG where all the other occupants are horrifying birds who mimic your behaviour with deep learning.'" The game is in rapid development, and you can check out the devlog here to see just how the whole thing works. If that is even possible. 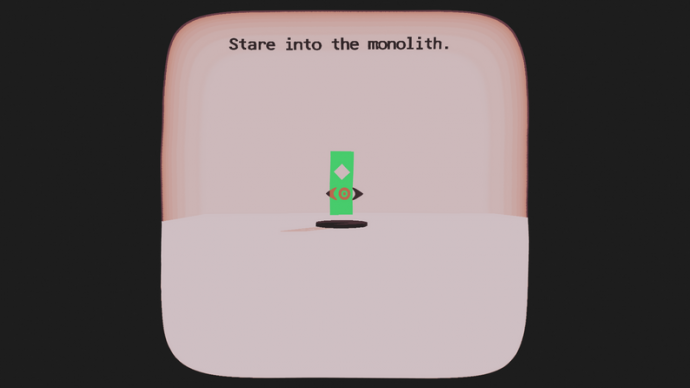 Don't Look Away From The Colours is a wickedly clever line-of-sight platformer. Paper Cookies, or Adam Pype, has been tackling a game-a-month challenge, and this is their twelfth entry. What a game to go out on. Here the conceit is that in order to progress through different levels, you have to keep your eye's crosshair centrally fixed on the right colour. Got a wandering eye or drifting gaze? Sorry, pal -- but that's not going to cut it. It's a stylish, slick example of solid game design, and I'm so glad to have found it -- because I know that there are eleven other games in Adam's game library just waiting to be played.

Flippy The Space Slime is a Bitsy game made for a one-room Bitsy game challenge. In it, you are Flippy: The Space Slime. Your one room is your space ship, the Sunfish Shuttle, and you are free to explore its confines while being serenaded by chiptune. Flippy will be there for a while, so he better get used to it. And that's it. Flippy will never overstay his welcome.

I'm regularly grateful that Bitsy exists. It's relatively easy to pick up, and as such, has been a site for a wealth of indie devs to experiment and play around. It's been used to make games serious and silly (never stagnant), and without it, I never would have been able to spend my time with Flippy.

Disclaimer: The folks over at Failbetter Games, who run #LoveIndies are friends of mine. But they didn't ask me to write this, and I sure didn't ask!