I'll defer from any commentary on the health of the VR industry and speak only personally: until today, there was enough dust on my goggles to craft a life-size Jeff Fahey statue. With the shock release of ur-console musical shooter Rez Infinite [official site] on PC last week, that's all changed. Whatever the future might hold for VR, the blissful lines, colours and rhythm of Rez writ wraparound and gigantic is a moment of redemption for the whole concept.

Rez was one of those games that seemed almost like virtual reality, long before any of us really knew what that meant. Gridlike sci-fi abstractions, a persistent but non-oppressive beat and a world of ever-changing wonders that pulsed and twitched and throbbed in time with its inextricably interwoven soundtrack. Virtual tourism to a higher state of consciousness, and also a fluid shooter whose on-rails flight and lock-on system both spared it from frustration and meant the action did not overwhelm the soundscape.

Then I played it in actual VR, and it comfortably passed a test that I've found precious few other VR games have done: it made its non-VR equivalent feel entirely redundant. On a monitor, Rez Infinite now seems so flat and small, absolutely like looking through a small window - a window to a better place, yes, but not stepping through the threshold into it.

I mean, I'm sure I'd adjust back and the goggless incarnation of Rez would regain its grandeur if I left the VR version alone for a while, but for now I'm lucky enough to have the choice.

Traditional Rez - a high definition remastering of the Sega-published Dreamcast and PS2 original - is one thing. Its precision-directed on-rails motion and simple polygon shapes retain bags of style and even some lingering sense of the futuristic 16 years later. But it does show its age, arguably even more so in VR, where the fuzzy image amps up the CRT vibes. 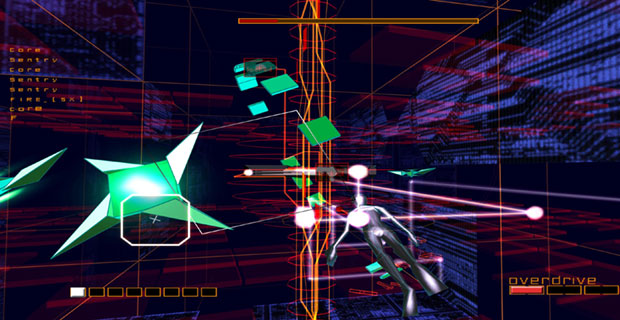 That's a comfort blanket of nostalgia in some ways, of course it is, but there is a very slight sense that the overwhelming thereness of using your head to look around this vast otherwordly space that wraps all around you is undermined by the great simplicity of Rez's original graphics tech. Then I fired up the other major mode from the main menu screen, Area X, and...

...this dark world of ours was blessed with absolute good. Area X is a sort of trial run for a full this-generation Rez, moving from the simple shapes and on-rails movement of its original form to a celestial vision of coloured particles and free flight of a sort. Your little Rez-fella is no longer some manner of cyber-thing but instead a creature made of starlight, occasionally adopting a zen meditation pose in the one thing here that's perhaps a little too on the nose.

It's majestic, all told, and it feels like a statement: this is what can be done with today's technology, this is why Rez is still relevant and, most of all, this is what your ridiculous, sweaty plastic face-box is for.

Area X is a dramatic spectacle, a real toe in the waters of a different reality. All issues around room-scale controls are discarded, as you use your controller (or motion controller) to waft your entity around the beautiful void and feel as though you have infinite space even though you are sat or (ideally) stood still. You can pull a trigger to 'fly' or brake, and seem to cover galactic distances in a heartbeat, even if the reality is that you rarely travel far from your next target. Smoke and mirrors, but what smoke and mirrors they are. 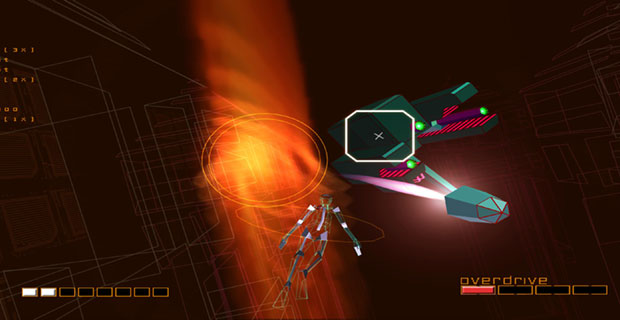 Area X's action is similar to Rez's - you essentially paint targets onto your chosen enemies, release the button and then they're automatically shot. Rinse and repeat, although increasingly you need to prioritise foes (and their missiles) and respond rapidly in order to avoid death. It's less frantic than trad. Rez can get however, which I think is a combination of changed design values in 2017 and being determined to create and enable you to soak in a more blissed-out atmosphere.

Enjoyment of either mode requires that you can give yourself to the music, however. Some of us have souls and some of us are cold and dead inside, to reignite the Audiosurf wars of 2008, and so I acknowledge that there are those who will find Rez/Area X to be dull and pointless, mechanical pew-pewing to a constant soundtrack that never goes anywhere. These people are villains whom you must excise from your life without hesitation or regret. 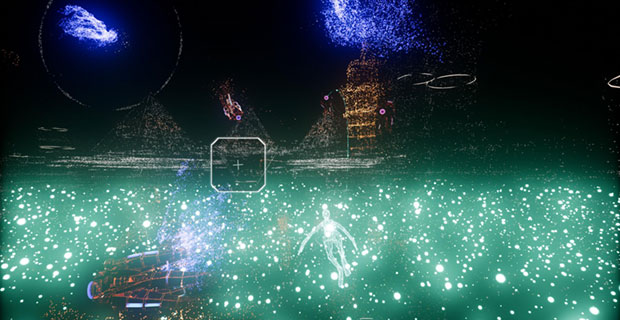 These are not songs that I hum in the shower or dredge up from Spotify. It is another sort of a music, fuel for a disappearance into another state of mind, effective only in tandem with Rez Infinite's two art styles, coupled with boss fights and level transitions and those moments when your every action not just matches but augments the sounds perfectly. I think sound has been a secondary, if not tertiary or lower still, element in too much VR, which dismally sidesteps the idea that virtual reality is supposed to be a sensory takeover, not merely another way of looking at a screen.

Rez, and particularly the majestic Area X, understands that ears are as important as eyes for that other place illusion to be sustained past the initial moments of goggling at big 3D things. I think that's a major element in why this feels like the single most essential VR game to date. (What a shame it is that the Rift's middling built-in headphones and the Vive's fiddly wire-nightmare make hearing those sounds with a degree of splendour to match the sights overly complicated). 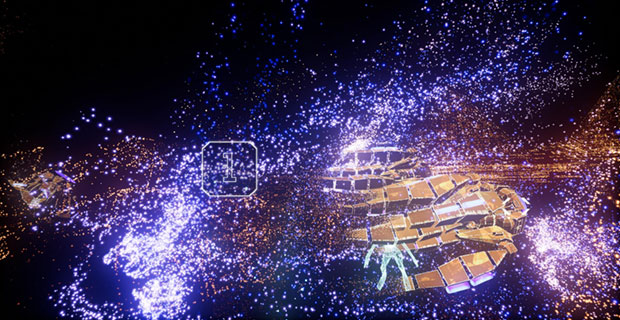 Poor old standard Rez Infinite. An amazing, groundbreaking thing rendered so plain by dint of another option in its own menu. Clearly, it's only an option for a few of us, but for those this is VR gaming's highest watermark. A reason to buy a headset? Well, perhaps not, given that anything else is diminishing returns after this, but it's certainly a reason to not regret your purchase.

Don't forget about our ears, developers. They matter too.