Rebellion's 2006 third-person shooter Rogue Trooper is, as I have said before, the archetypal 7/10 action game. I mean that only positively: a game you fire up with no expectations of bar-raising, but just a solid good time. (As opposed to a 7/10 game that you expected 10/10 things from but were left underwhelmed). I've been in two minds about the revelation that it was coming back this year, remastered for PC as well as assorted consoles. For one thing, the original still looks pretty fine when cranked up to big resolutions. For another... well, it's good, but it's not quite Carling, is it? How much betterer could jiggery-pokered graphics really make Rogue Trooper?

I've been playing Rogue Trooper Redux [official site], and the answer is: not much. If this is your first time with it, the new version's still that crucial solid good time nonetheless.

To recap: Rogue Trooper is the tale of Rogue, a Genetic Infantryman bred to fight in an apparently ceaseless war for Nu-Earth in the far future. He's super-tough and resistant to the pervasive radiation and other lethal chemicals on this blighted world, which is where the whole blue skin thing comes in. On top of that, a trio of his fallen comrades have had their personalities encoded onto microchips fitted into his helmet, gun and backpack (let's step politely aside from the grim nominative determinism of these guys being called Helm, Gunnar and Bagman even before their death and electronic resurrection as various men's accessories).

In practice, that means they can do nifty things like build ammo out of salvage, become auto-firing turrets and whatnot. Nothing particularly mould-breaking for a third-person shooter, but that's yer genre-traditional gimmick, anyway. All told, there's a little bit of sneaking, a little bit of cover-shooting and a whole lot of head-popping across a setting that is basically post-apocalyptic World War II.

Let's get the new look elements out the way before I chat about how the game in general holds up 11 years later. Some stuff, such as lighting, shadowing and some texturing, is a subtle but noticeable improvement, upping the overall sense of gloss without changing the look of the game. Other stuff, such as more detailed wrinkles and muscle lines on titular blue infantryman Rogue, might look a little more 2017, but also serve to undermine the original version's well-judged moving comic book aesthetic. 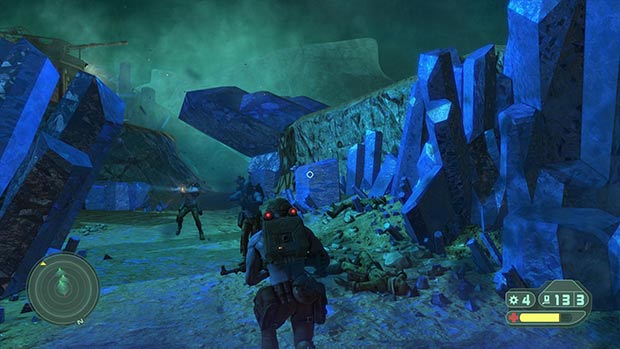 Rogue Trooper is an adaptation of a 2000AD strip, y'see, and though that boasted some world-class artists in its time, it never really strove for photorealism as such. In other words, this new'un's more interested in being a videogame than it is an adaptation. Not unwise, commercially, seeing as the Rogue strip's reach probably begins and ends at 30 to 50-year-old British comicheads, but I do think it makes Rogue Trooper Redux look less distinctive than it might have been had it held the lineart line. 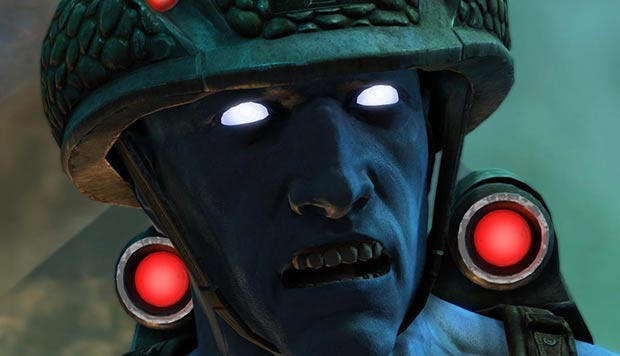 I don't know how these gruesome gnashers got made, let alone got approved for release. Unmasked characters all boast a collosal overbite when speaking, and the net effect of the Genetic Infantrymen is that of an army of Duane Dibbleys. I don't want to spend too many lines bellyaching about mis-rendered ivories, but they're the oversized cherry on top of a cake that I feel might just have lacked consistent artistic oversight. As such: as much as I miss the subtly nicer lighting, crisper textures and less angular edges of Redux, I definitely prefer the more stylised and less raptor-faced original. Rogue himself looks so much better in the 2006 version of his lone star turn.

Of course, it's another matter on console - Redux is the only way to play Rogue on PS4, Xbone or Switch, and it deserves its second chance there, but on PC we have the choice of either edition, and the old one really does scale up to big resolutions rather well. 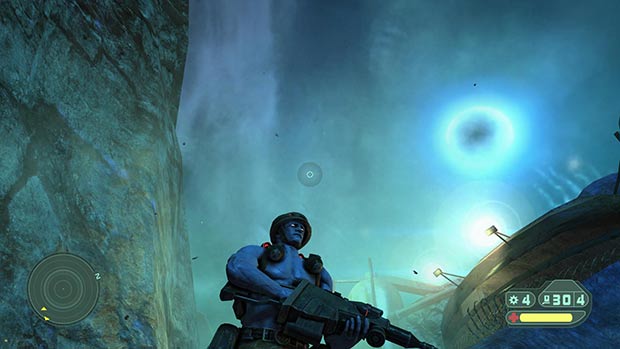 As for the heart that beats underneath this shinier blue skin, little if anything has changed. I thought perhaps there were a few minor nips and tucks to flow, item/enemy placement and interface, but it was quite likely a trick of the mind. This is functionally the same game, replete with slightly outdated-feeling mechanical camera movements in cutscenes, unsexy menus and thin characterisation.

At the same time, I can feel the age moreso now than previously. It's not as if it's pretending to be full-blown 2017 game, but there is a certain smallness and perfunctoriness to it compared to the high gloss and chest-thumping of today's big action fare. This is as much a positive as a negative: trupple-ay games can be exhausting in their pomposity and setpieces, whereas this just lets you get on with it. But the overall effect of the redone graphics is to make a 2006 game feel perhaps like a 2011 game, not a 2017 one. 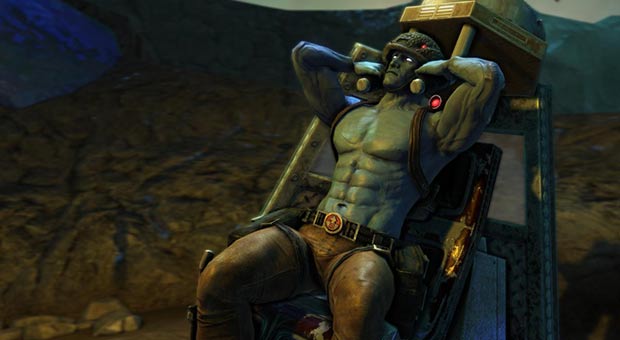 I'd be wholeheartedly recommending Redux over Rogue '06 if it wasn't for the anachronistically over-detailed faces and the nightmare teeth. It just looks that little bit less like a Rogue Trooper game to me for that reason - but, monstrous chompers aside, if you're not coming to it with comic heritage, Redux is almost certainly going to look a whole lot better to you. (It also plays nice with a wider range of resolutions without any exterior fiddling being required, I should note). In truth, the differences aren't profound enough for it to much matter which version you choose - but you really should choose one if you've not stepped into Rogue's shoes before (the shoes, at least, do not have an electronic ghost inside them).

They don't often make 'em like this any more. I wish they would, I really do. If you miss 'em too, choose another from our round-up of the most perfectly average best action games on PC.

Rogue Trooper Redux is released today for Windows PC, via Steam and GOG.